The warty pig painting was found in a cave in Indonesia and is thought to be at least 45,500 years old 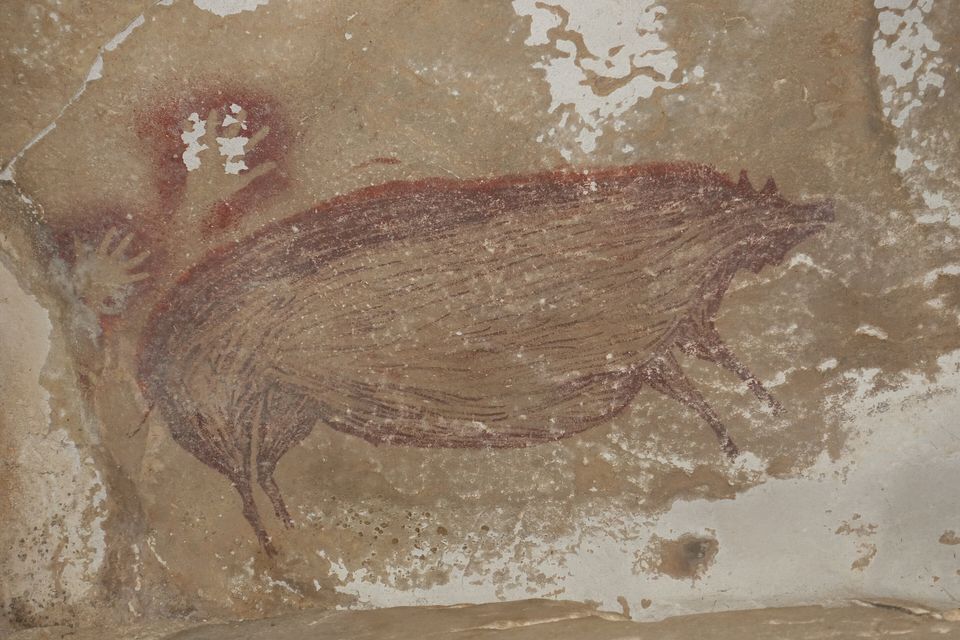 Deep within a cave in central Indonesia, archaeologists have discovered a wild pig painting created, they say, at least 45,500 years ago. It is now claimed to be the oldest known animal painting in the world.

The life-size work, painted in red ochre pigment and measuring 136cm by 54cm, was identified as depicting a Sulawesi warty pig. It was uncovered in the Leang Tedongnge cave in a remote valley on the island of Sulawesi by Adam Brumm and his team from Griffith University in Brisbane, Australia, who published their findings in Science Advances journal on Wednesday.

"To our knowledge, the animal painting from Leang Tedongnge is the earliest known representational work of art in the world," state Brumm et al in the article.

“I was struck dumb,” Brumm told New Scientist. “It’s one of the most spectacular and well-preserved figurative animal paintings known from the whole region and it just immediately blew me away.”

According to one of the paper's co-authors, Maxime Aubert, the team were able to determine the painting's age from analysing a calcite deposit that had formed over the top of the work via a method known as uranium-series dating. However, as this process only dates the mineral layer, the painting could be much older than 45,500 years.

The painting is accompanied by two other porcine pictures, presumed to date around the same time. For comparison, Europe's earliest known figurative cave paintings in Chauvet, France are thought to be around 33,000 years old.

However, the Indonesian warty pig is not the oldest painting in the world. This title is still held by a red Neanderthal hand stencil in Maltravieso cave, Cáceres, Spain. Meanwhile, in 2018 scientists claimed they found "humanity's oldest drawing" on a fragment of rock in South Africa, dated at 73,000 years old.

A number of ancient cave art discoveries have been made recently in the region surrounding Leang Tedongnge. Last year, Brumm and his team found a painting in a nearby cave, Leang Bulu'Sipong 4, depicting a buffalo being hunted by part-human, part-animal creatures holding spears, which they dated to at least 43,900 years old.

These findings provide the earliest evidence of human settlement in the region, strengthening theories that early homo sapiens crossed these islands to migrate from Africa to Australia around 65,000 years ago.