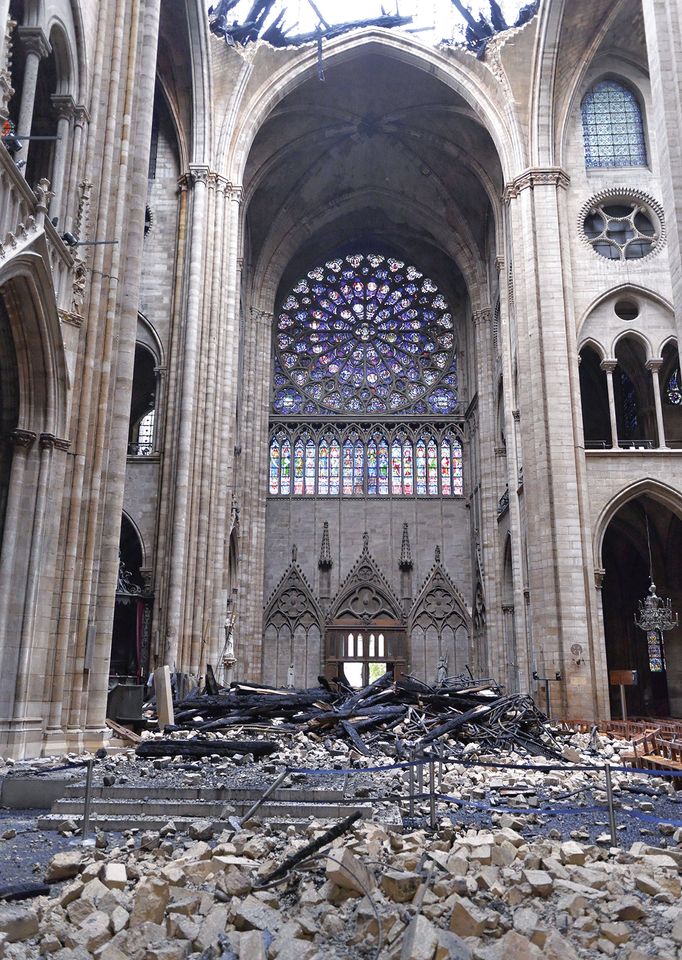 Debris inside Notre Dame after the catastrophic fire; the rose window appears to be intact, but the glass may have suffered from micro-cracks, requiring time-consuming repairs Photo: Bastien Louvet/SIPA/REX/Shutterstock; © 2019 Shutterstock

Heritage experts warn that restoring Notre Dame de Paris after the devastating fire of 15 April will be so complex that it could take a decade or more, despite President Emmanuel Macron’s vow to “rebuild the cathedral more beautiful than ever” within five years.

With the entirety of the cathedral’s treasure of religious objects and most of its works of art safely evacuated and transferred to the Musée du Louvre for treatment, workers rushed to shore up the parts of the Gothic building at highest risk of collapse in the days after the blaze. Their efforts led the culture minister Franck Riester to declare on 20 April that Notre Dame was “almost saved”.

But the great unknown remains the stability of the cathedral’s stone vaults, which were exposed to searing heat for hours as an inferno raged through the lattice of oak roof beams in the attic above, known as “the forest”. The fire consumed the wooden central spire and three-quarters of the roof, leaving three gaping holes in the vaulted ceiling.

Engineers and scientists will need to test whether the stones were permanently weakened by the heat of the blaze, followed by the shock of the cold water used by firefighters. “Limestone can lose about 75% of its strength when it’s exposed to heat over 600ºC,” says George Wheeler, a leading expert in stone conservation. “And that fire certainly exceeded 600ºC in many locations.”

Once the debris inside the cathedral has been cleared for forensic analysis, specialists can mount scaffolding to conduct systematic ultrasonic pulse velocity tests, “pinging” the stones and listening to the reverberations to detect potential areas of weakness. Ground-penetrating radar can also be used to identify voids and cavities.

Conservators around the world are also waiting in suspense for word on the condition of Notre Dame’s three 13th-century stained-glass rose windows. Although they appear to be intact, their lofty position could have exposed them to extreme heat—“a high risk for the glass but also for the cames, the connecting lead frame”, says Hannelore Roemich, a conservation scientist at New York University. “I don’t feel optimistic until someone is up there with a magnifying glass.”

The combination of heat and rapid cooling can cause micro-cracks in the glass, says Sarah Brown, the director of the York Glaziers Trust. In this case, each of the hundreds of panels at Notre Dame would need to be carefully chipped out of the masonry and individually repaired. The process is “very time-consuming and potentially very costly”, Brown says, although there are fortunately “very good historical records of the windows” in the Corpus Vitrearum stained-glass archive. Soot can be removed in a careful workshop cleaning, Roemich adds.

Another immediate priority must be the removal of the “several thousands of tonnes of water in the building”, says Richard Carr-Archer, a trustee of the UK’s National Churches Trust and a veteran cathedral architect who worked on the reconstruction of York Minster after the fire by lightning strike there in 1984. The water that firefighters pumped into Notre Dame is arguably worse than the historic destruction wrought by fire at Chartres and Reims cathedrals, says the architectural historian Alexandre Gady, because it “will create work [for restorers] for months and maybe years, by infiltrating the ancient mortar and causing mould”.

Andrew Arrol, the current surveyor of the fabric of York Minster, estimates that devising a detailed plan for the restoration of Notre Dame “could easily take two years” alone. An “enormous amount of survey work” will be needed simply to understand how the loss of roof timbers has affected the “complex system of loading patterns” that supported the building for 800 years, he says.

The daunting prospect of replicating the cathedral’s “forest”—roof timbers made of 1,300 oak trees that were as much as 400 years old when they were felled in the 12th and 13th centuries—has sharply divided opinion in France. Rémi Desalbres, the president of France’s association of heritage architects, refutes the theory that the wooden roof frame could be replaced by a lighter structure, perhaps in iron, like at Chartres, or reinforced concrete, as was used at Reims after the First World War. “The weight has its importance,” he says, adding that any decision to deviate from the original material would be viewed as a “betrayal” by French preservationists.

Desalbres also dismisses concerns that France lacks the old-growth wood to restore the roof as it was, citing “generous donors” such as the insurance firm Groupama, which has pledged 1,300 oak trees from the forests it owns in Normandy. As for the carpenters, “there are many qualified artisans and companies working on historic monuments across France” who are ready to collaborate and maintain the 800-year-old “living heritage” of cathedral-building, he says.

There is an “educational opportunity” to train new artisans in the woodworking and masonry techniques needed for Notre-Dame, agrees the director of the Paris-based Unesco World Heritage Centre, Mechtild Rossler. Unesco and a coalition of German and Swiss master builders have offered their technical expertise to the French authorities, she says. Macron’s government has already launched a programme to recruit young apprentices into specialist art trades in a bid to meet the president’s five-year timescale for the reconstruction.

But even with the manpower and materials assured, “you could argue about the conservation issues forever”, Richard Carr-Archer says. The debate in France is “extremely emotional because this symbolic monument has been destroyed—it’s not the same as a restoration campaign”, says Roland May, the head of the French branch of the International Institute for Conservation.

Controversy over the government’s architectural competition for a new spire “adapted to the techniques and challenges of our time”—launched two days after the 19th-century spire designed by Viollet-le-Duc dramatically collapsed in the fire—is threatening to blow up into “another conflict like the Louvre pyramid” in the 1980s, says the art historian Jean-Michel Leniaud.

Finding a consensus between the “ancients and moderns”, Christians and secularists “will be extremely difficult”, he says, although the practicalities are “simplified” by Macron’s political commitment and the international outpouring of donations, which topped €1bn days after the disaster. The French president quickly named a special representative to lead the reconstruction efforts: Jean-Louis Georgelin, a retired army general and Catholic known to have worshipped at Notre Dame.

But Georgelin’s surprise appointment and the gung-ho spire competition has experts worried that Macron is “bypassing” the usual procedures that govern major restorations in his rush to reopen the monument for the Paris Olympic Games in 2024, Alexandre Gady says. On 24 April, the French council of ministers announced an exceptional draft law for the administration and funding of Notre Dame’s reconstruction. The proposals include a 66% tax break for donations over €1,000 made before 31 December 2019, the creation of a new public body to manage the process and “where necessary, exemptions or adaptations” to urban planning, environmental protection and heritage preservation regulations.

The only certainty is that the restoration will be “very long and delicate, and we absolutely can’t say it will take four, five or ten years”, Gady says. “The president should have said we will do it as well as we can, not as fast. It is the monument that commands—we must obey.”