Where are the flood barriers, cry the citizens of Venice after its second worst flood since records began 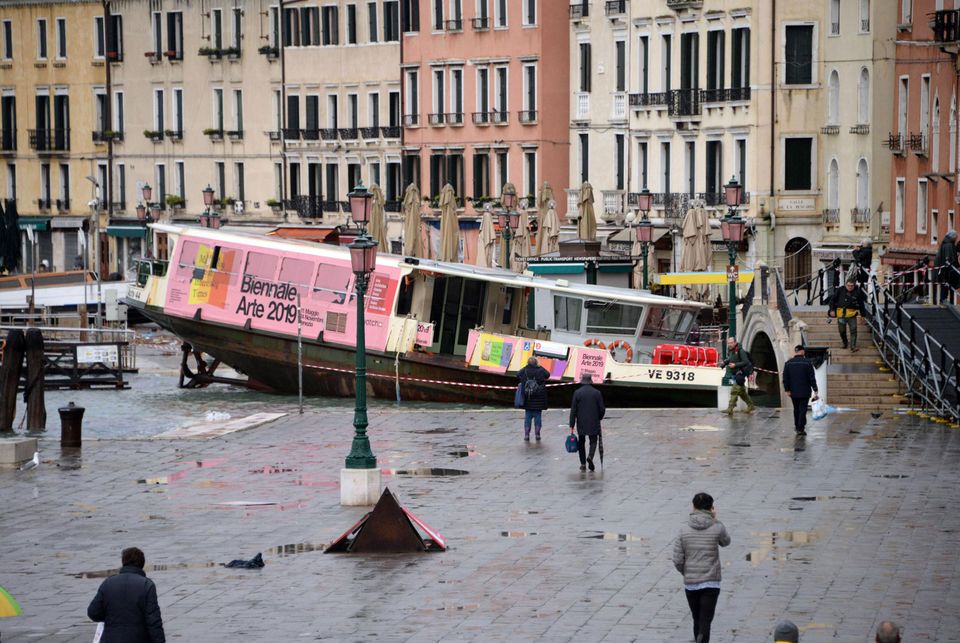 Venice has been hit by the most severe flooding since the great acqua alta in 1966, when the water reached 194cm above mean sea level. At 10.50pm last night, the water was at 187cm, with people wading thigh-deep in Piazza San Marco, which is the lowest lying part of the city, and 80% of the city under water. The crypt of the basilica of San Marco has flooded to a depth of 110cm and the entrance to basilica, with its precious medieval mosaics and marbles, to a depth of 70cm.

The damage to houses, hotels and shops is severe. Vaporetti (water buses) are out of action; pontoons, gondolas and motor boats have been torn from their moorings. An electrical short circuit caused a fire in Ca’ Pesaro, seat of the Galleria Internazionale di Art Moderna, but was contained without damage to the works of art. Via Garibaldi near the Giardini where the Biennale continues to the end of the month looked like a river in full spate. There is no news yet about the condition of the works of art in the Biennale. Pellestrina, Cavallino Treporti and Jesolo, towns on the sea edge of the lagoon, have suffered varying degrees of damage.

This morning’s high tide at 10.20 brought renewed flooding of 150cm, and it is expected to continue until Friday inclusive, according to the Centro Maree, the tide observancy, whose telephones and warning sirens are out of action.

The cause is a storm surge, brought about by a high astronomical tide coinciding with a strong south-east wind, which has piled up the water of the Adriatic sea in the narrow cul-de-sac that is the gulf of Trieste. Winds of 100km an hour have been blowing, exacerbated by a small tornado over the area of St Mark’s Square.

Angry citizens and commentators are pointing out that the mobile barriers, generally called Mose, at the three openings between the sea and the lagoon should have been finished by now. The first completion date should have been 2011. But hope is dwindling that they will ever be finished, or if they are, that they will be safe and effective.

In June it was revealed that the project, which is 80% complete but has not been maintained since a huge corruption scandal halted work in 2014, is already deteriorating and needs lengthy repair work to the gates and their hinges.

Even worse news came late in October. A test raising of the hollow steel gates at the Malamocco entrance was halted after the tubes through which the sea water is pumped to raise and lower them began to vibrate. No one now believes that Mose will fully operative by the latest official completion date of December 2021 because there is no faith either in the engineering project as whole, or in the management that should be directing the work, and or in central government, which has failed to give a definitive go-ahead to its completion, let alone a guarantee of the necessary funding. Mose has already cost €6bn, of which as much of a third is estimated to have been lost to corruption, and it seems to present an open-ended bill to the tax payer.

In view of this ongoing crisis, which threatens the very survival of the city, the decision this July on the part of Unesco not to declare Venice a World Heritage Site at risk is a shocking dereliction of its duty, a decision that they should reconsider as soon as possible.