Who are the people seeking political asylum in the US? Edafe Okporo, a refugee and gay rights activist from Nigeria who was a victim of mob violence, participated in the project. Okporo is now a published writer, a Beyond the Bar fellow at Columbia University as well as a youth representative to the United Nations Department of Public Information and NGO Executive Committee Shimon Attie/More Art

On Thursday (20 September), as world leaders convene in New York for the annual United Nations General Assembly, the faces of 12 people who have sought political asylum in the US will appear larger than life on a 12-foot-tall video screen floating along the waterways of the city. The multimedia installation, called Night Watch and mounted on a slow-moving barge, was conceived by the New York-based artist and photographer Shimon Attie in collaboration with the non-profit organisation More Art to “give voice to communities who have been traumatised or victimised because of our current zeitgeist”, Attie says.

The project profiles several LGBTQIA individuals who “faced tremendous vulnerabilities in their native countries and fled under the threat of life or death”, Attie says, adding that the faces of the participants, who came from Kazakhstan, Russia, Colombia and other countries, “emerge from the darkness like in a Caravaggio painting”. The artist, who has previously worked on several site-specific pieces that address immigration and refugees, says he turned to local advocacy groups like Immigration for Equality and the Safe Passage Project to find the subjects. He recorded their stories because they were “devastating to hear [but] also hopeful,” Attie says, “and they show how resilient humans can be to survive certain situations and strive to make a good life”.

One of the asylum seekers in Night Watch, Edafe Okporo, is a 26-year-old activist who fled Nigeria in 2016 in the wake of the government’s draconian anti-homosexuality laws. “There was mob violence and anyone who they thought was queer was attacked”, Attie says, adding that Okporo was very badly hurt. His arrival in the US was not without its own troubles, however. “When he landed at the airport and told the immigration folks that he was requesting asylum, he was arrested by ICE and taken to detention in New Jersey for nearly seven months until someone was able to approve his application”. Okporo published a memoir about his experience titled Bed 26, after the cot he was assigned in prison. He is now a fellow at Columbia University and a youth representative to the United Nations Department of Public Information and NGO Executive Committee. 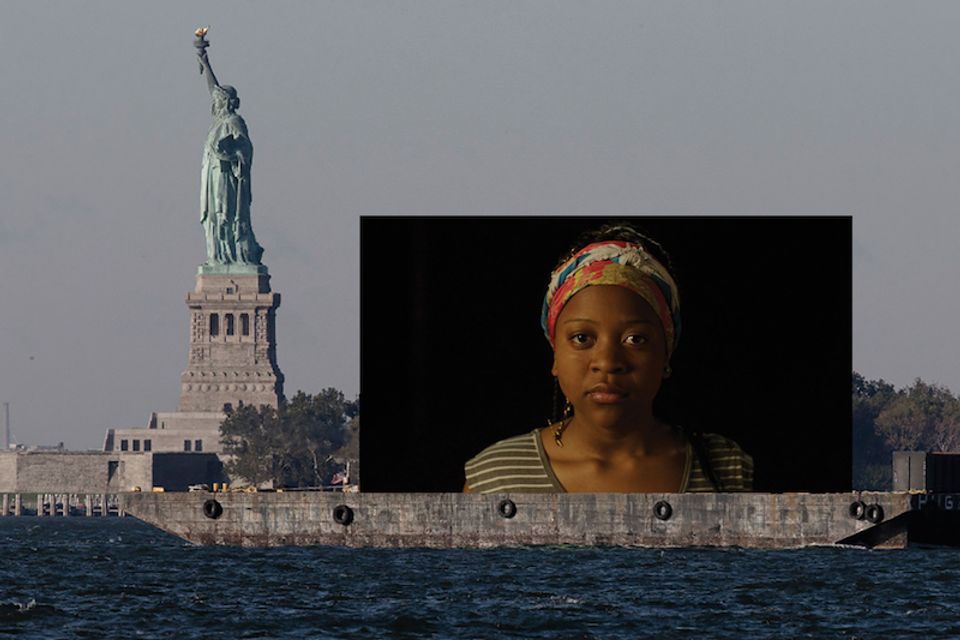 A rendering of the Night Watch project, running for 20-27 September in New York Shimon Attie/Night Watch

The project is being supported by the New York department of Cultural Affairs and the New York State Council on the Arts, as well as the Shelley and Donald Rubin Foundation, the Lambent Foundation and private donors. Visitors can track the installation, which travels from Staten Island to the shores of Brooklyn, Queens, Manhattan, Roosevelt Island, the South Bronx and New Jersey through 27 September, though More Art's social media (Twitter: @moreart, Instagram: @moreartnyc). A series of programmes looking at immigration rights has been organised for the run of the project at various parks in New York City and at the Jack Shainman Gallery in Chelsea.

“Arts and ethics are intertwined but, unlike politics, art is not about a specific message but stirring some poetic oxygen”, Attie says. The dedication that appears at the end of the video portraits strikes such a lyrical tone: “For the millions who have been forced to flee their homelands to escape violence and discrimination. For the fortunate few who have been granted political asylum in the United States.”