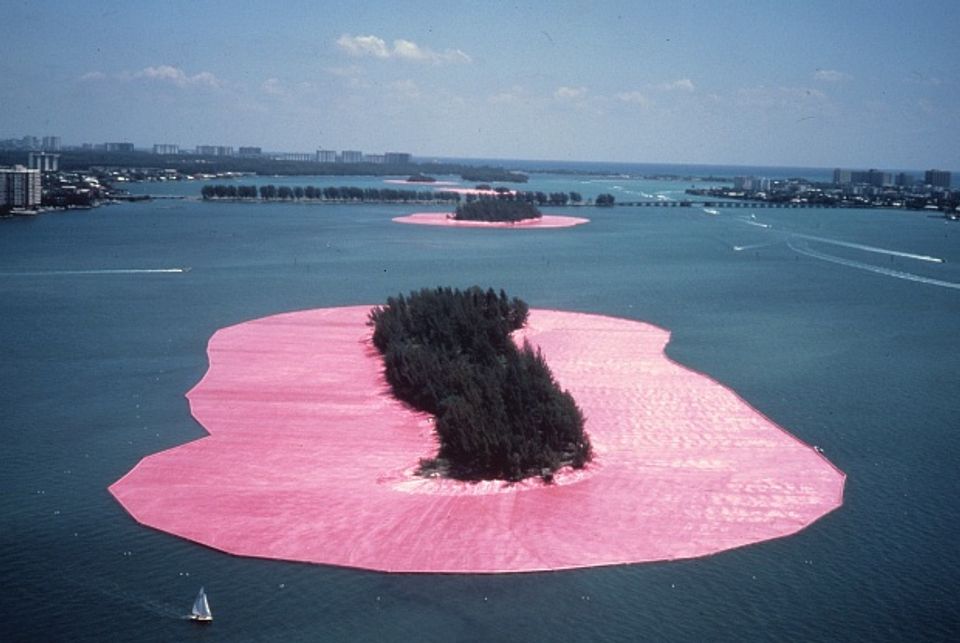 Christo and Jeanne-Claude made waves with Surrounded Islands (1983) in Miami’s Biscayne Bay © Christo, 1983

Against the backdrop of a global pandemic and race riots across America, Christo’s art resonates more than ever say art world professionals in homage to the late artist who died yesterday aged 84. Bulgarian-born Christo created his monumental, whimsical works in partnership with his wife Jeanne-Claude who died in 2009.

Franklin Sirmans, the director of the Pérez Art Museum Miami, recalls the exhibition held at Pamm in 2018 which focused on Surrounded Islands (1983), whereby 11 islets in Biscayne Bay, Miami, were encircled with pink polypropylene fabric resting on the water.

“Making art out of fear… while Christo spoke of his own personal trauma as a refugee, his work for Miami was a healing machine meant to bring people together in the wake of #arthurmcduffie #marielboatlift and capitalist violence 1980-1983,” Sirmans writes on Instagram. After the black motorist Arthur McDuffie ran a stop sign in late 1979, Miami-Dade officers allegedly beat him to death; four policemen were acquitted of the killing, sparking riots across Miami in May 1980.

The UK artist Dan Tirels, meanwhile, highlights Christo’s 1976 project The Running Fence based in Sonoma and Marin Counties, California. The piece—comprising 24.5 miles of white billowing nylon fabric—“was concerned with bringing people and communities together, not about separation and division”, Tirels posted on Twitter.

Other artists are also assessing his legacy. London-based Idris Khan recalls the time he saw Christo speak at an event in Doha, Qatar. “He was so incredible to watch and an inspiration. I remember him saying, ‘having ideas is easy… which idea to choose is the hardest’,” Khan writes on Instagram. The South Korean conceptual artist Kimsooja points out: “Very sad that he couldn’t see his new piece at Arc de Triomphe in Paris [launches September 2021]… great loss for this era.”

Curators at the Centre Pompidou in Paris are due to open the exhibition Christo and Jeanne-Claude, Paris! on 1 July (until 19 October). “Christo was a great artist, capable of giving our daily life a new depth. A magician. He was also a magnificent person combining audacity, determination and a deep humanity,” says Serge Lasvignes, the president of the Centre Pompidou.

about 7 hours ago
Art Basel 2021: it’s good to be back—but things are going to change, dealers say