Why is the British Museum still accepting tobacco sponsorship? 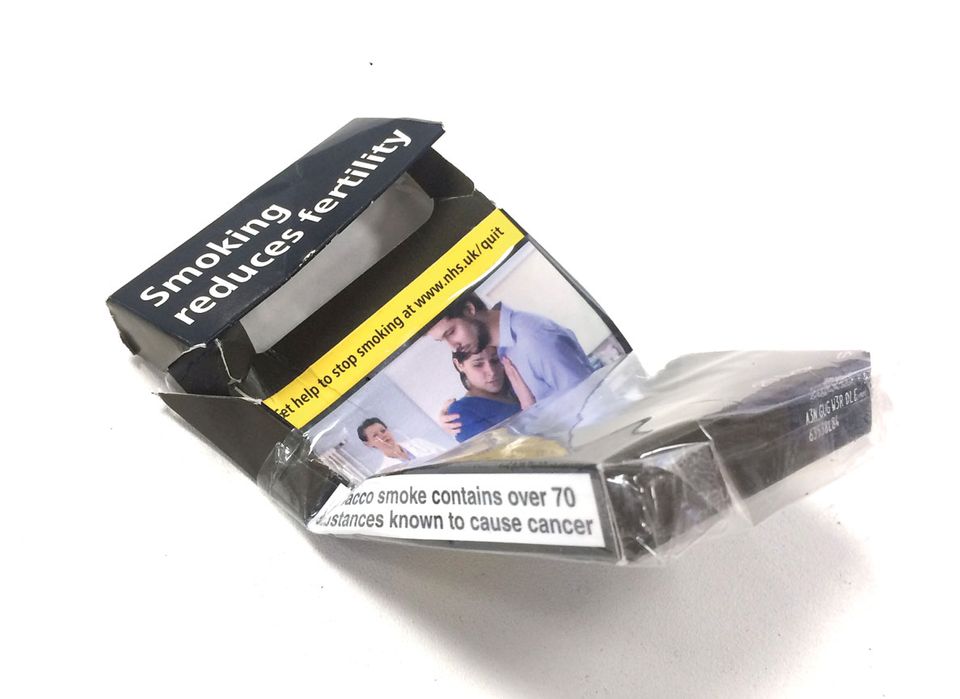 The British Museum is still accepting tobacco company sponsorship, 28 years after it was banned by the Tate. Japan Tobacco International, which operates under its more innocuous initials, JTI, provides funding to the museum’s Asia department. Its brands include Benson & Hedges, Winston, Camel and Silk Cut.

The JTI Japanese Acquisition Fund has enabled the British Museum to add 600 objects to its collection. JTI also finances a museum project curator for Japan, currently Alfred Haft. A museum spokeswoman says that “JTI have supported the museum since 2010 and we are grateful to JTI for their long-term partnership”.

Under the museum’s 2016 Acceptance of Donations Principles, the trustees are required to consider “the economic benefits of accepting the money being weighed against the potential cost of reputational risks”. This suggests that the museum does not consider that tobacco sponsorship has a negative impact on its reputation. However, although the museum accepts funding for acquisitions and curatorship, it is understood that it would be unlikely to do so for more public activities, such as exhibition sponsorship.

Sponsorship and donations for museums have recently come under increased scrutiny, as shown by protests over Sackler family grants—with London’s National Portrait Gallery forgoing a donation last month. However, tobacco is a very much greater health hazard than OxyContin, the drug produced by the Connecticut-based Sackler-owned Purdue Pharma company. 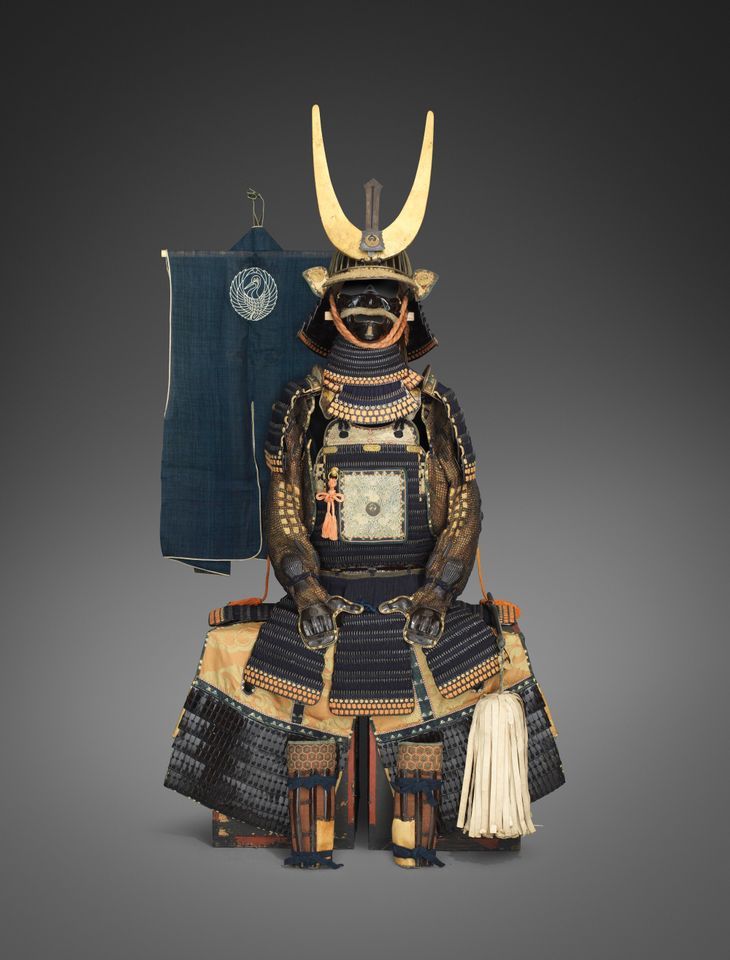 Smoking kills 100,000 people a year in the UK alone, according to official statistics. Oxycodone, the generic name for OxyContin, caused fewer than 100 deaths. However, Oxycodone can lead to heroin addiction and it is a larger cause of death in the US.

Although in recent years the British Museum has become the target of environmental protests against BP sponsorship, so far it has faced little criticism over tobacco.

The British Museum is the only major UK national museum of art or antiquities that accepts tobacco sponsorship. Spokespeople for the Tate, the National Gallery, the National Portrait Gallery and the Victoria and Albert Museum all say that they have not received tobacco funding in the past ten years.

One leading UK institution which does accept tobacco funds is the Royal Academy of Arts. However, as an independent charity with no government grant, it is more dependent on sponsorship than national museums. JTI is among the academy’s corporate sponsors (paying £45,000 a year), while the UK-based British American Tobacco is an associate corporate sponsor. JTI has also supported exhibitions, including Anish Kapoor (2009), Mariko Mori (2012) and Giorgione (2016).

Internationally, JTI is one of the five sponsors of the 58th Venice art Biennale (11 May-24 November). The company will run an “accessibility programme”, with guided visits and workshops aimed at communities that do not normally attend art exhibitions.

The Tate takes a stand

We can reveal that in 1991 the then Tate Gallery’s board of trustees decided to refuse tobacco sponsorship. This policy had been proposed by the director Nicholas Serota, three years after he took over as the director.

Unpublished trustee minutes, now declassified, record that the gallery “should not accept sponsorship from companies whose main area of business is the production and sale of tobacco”.

Tate introduced two further bans at the same time. The gallery “should not accept sponsorship from arms dealers nor from companies whose main area of business is that of arms manufacture”. This followed the sponsorship of a 1984 exhibition on George Stubbs, which was funded by United Technologies, then a major contractor to the US military. Finally, the trustees decided that the gallery “should continue its policy of not approaching companies with a major interest in South Africa, until the political situation improved further, and sanctions were lifted”.

The Tate no longer has specific restrictions on tobacco sponsorship. Its 2018 donations policy says that sponsorship should be refused if there is “potential reputational risk”—a similar position to that of the British Museum. However, a spokeswoman says that “Tate’s practice is that we don’t accept sponsorship from tobacco companies”.

The tobacco industry’s sponsorship of the arts was once much more prevalent in the US than it is today—but it has by no means stopped. Philip Morris, the maker of Marlboro cigarettes, has been a major corporate sponsor of museums and performing arts groups for decades, and in the 1980s would take out weekly ads in publications like The New York Times' promoting the exhibitions and cultural events that it sponsored, including the Metropolitan Museum’s blockbuster 1984 loan show of Vatican Treasures and MoMA’s Braque and Picasso survey in 1989.

“The cigarette maker was becoming by far the largest corporate benefactor of the arts in the US throughout the latter half of the 20th century,” says Dr Alan Blum, the director of the Center for the Study of Tobacco & Society at the Univeristy of Alabama, who has built an archive of materials documenting the industry’s long support for the arts, including catalogues from more than 200 exhibitions dating from 1957. Philip Morris's philanthropy benefitted the company, Blum says, “by legitimising and enhancing its image not only among the elite in the arts community but also in the business and financial communities.”

But, Blum adds: “The cigarette companies have never begged art museums to take their money—just the opposite is true. Arts organisations beat a path to Philip Morris and thus in my opinion should be considered full collaborators in the burnishing of the company's image.” 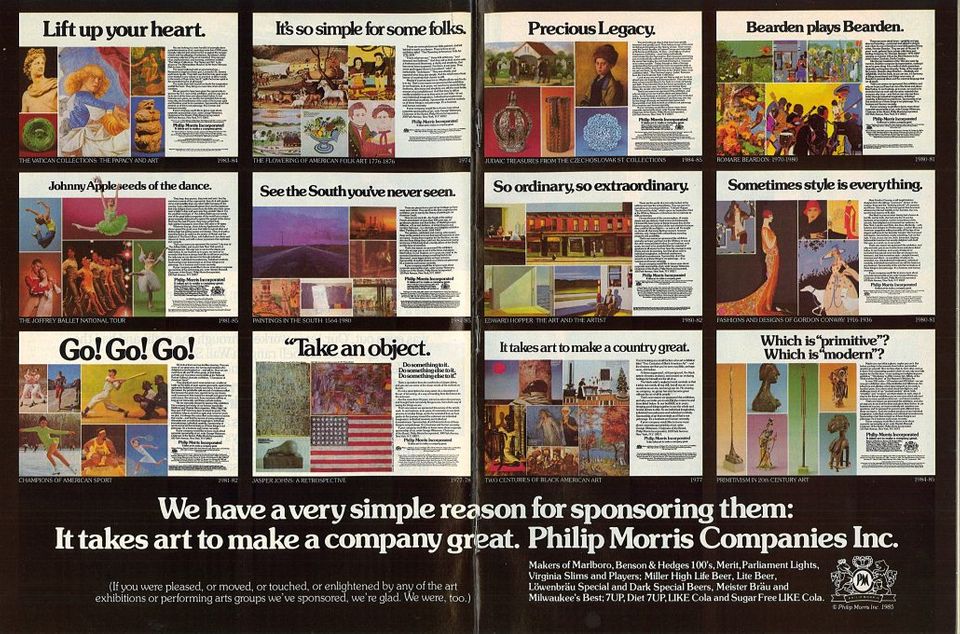 The Whitney Museum of American Art even ran a branch space in Philip Morris’s New York headquarters from 1983 until 2007, when its rebranded parent company Altria relocated most of its operations to Richmond, Virginia. Since then, the company has focused its arts funding on museums and exhibitions there and in Washington, DC.

Major shows that have received funding from Altria over the last two years include Della Robbia: Sculpting with Color in Renaissance Florence at the National Gallery of Art (5 February-4 June 2017), Do Ho Suh: Almost Home at the Smithsonian American Art Museum (SAAM) (16 March-5 August 2018), the continuing installation of Mark Bradford’s large-scale work Pickett’s Charge at the Hirshhorn Museum and Sculpture Garden (8 November 2017–2021). And Altria gave a founding gift of $1m to the Smithsonian’s new National Museum of African American History and Culture.

As a long-time sponsor of the Virginia Museum of Fine Arts—near its corporate headquarters in Richmond—it recently funded Terracotta Army: Legacy of the First Emperor of China (18 November 2017-11 March 2018), Napoleon: Power and Splendor (9 June-3 September 2018) and Howardena Pindell: What Remains to Be Seen (25 August-25 November 2018). Altria's support over the past 50 years, "has been instrumental in fulfilling the museum’s educational mission, strategic development, growth, and expansion," says the museums director Alex Nyerges, adding: "We admire their transparency about tobacco-related health issues and look forward to working with them for years to come."

Other tobacco companies have not been as prominent in their sponsorship, although R.J. Reynolds opened its founder’s home in Winston Salem, North Carolina as the Reynolda House Museum of American Art in 1967. The museum is currently hosting the shows Georgia O’Keeffe: Living Modern (until 4 August), Martin Puryear: Cane (until June 23) and Hopper to Pollock: American Modernism from the Munson-Williams-Proctor Arts Institute (until 12 May).