Based on the 1860 Wide Awake movement that mobilised against slavery and helped elect Lincoln, the new network of artists and creatives has launched Kickstarter's largest collaboration to date A group known as the Wide Awakes, originally launched in January by Hank Willis Thomas, is now working to organise a large network of artists, cultural workers and activists in hopes of fighting injustice and getting out the vote in the lead up to the 2020 presidential election.

Comprised of artists like Thomas, Kehinde Wiley, Arthur Jafa and rafa esparza, along with organisations such as Creative Time, For Freedoms and the Guild of Future Architects, the Wide Awake network takes their name from an outspoken group of 19th-century abolitionists who helped to elect Abraham Lincoln. Thomas's Wide Awake group defines itself as “a network of like minds who create in the name of liberation, artist sovereignty, and the evolution of society" that aims "to radically reimagine the future and enable self-emancipation", according to its mission statement. Artist Wildcat Ebony Brown is part of the Wide Awakes, a group that is encouraging people to get out and vote. Benjamin Lozovsky

While most of their events so far have been spontaneous at marches and rallies that had already been planned, the Wide Awakes are now planning their first coordinated march on 3 October, to commemorate the 160th anniversary of the Grand Procession of the Wide Awakes, in which 10,000 protesters marched through New York City in advance of Lincoln's election. The event will be held in cities across the country as well as virtually.

Additionally, 14 members of the Wide Awakes have launched a Kickstarter that will fund 14 projects across the US, from town halls to dream up new inclusive policies to artistic interventions to combat voter suppression in the lead up to the 2020 presidential election. It marks the largest collaboration of cultural leaders Kickstarter has ever seen on its platform. 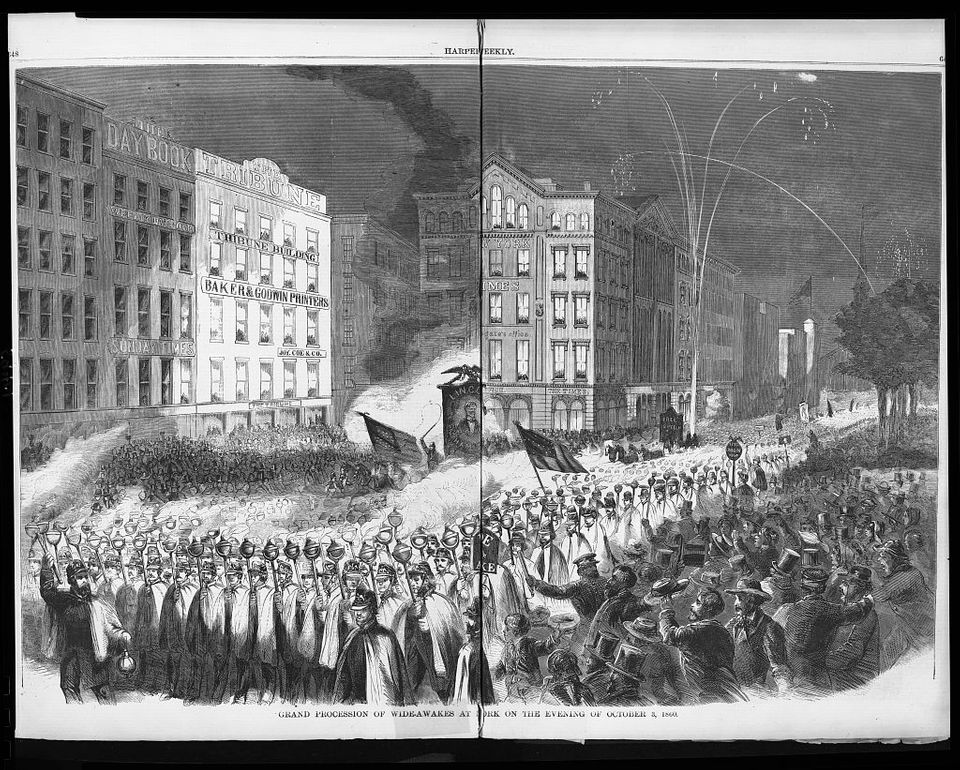 An illustration from an 1860 edition of Harper's Weekly depicting the original Grand Procession of Wide Awakes in New York. Library of Congress Prints and Photographs Division

“I was a mixture of curious and eager to find out what new collective he had envisioned,” says Patton Hindle, Kickstarter’s Head of Arts, of her initial meeting with Thomas in January. “It was immediately clear that he had a powerful and historically rooted movement on his hands, fuelled with joy and inclusivity in a way that no other is, which is exactly what we need in this moment and our future."

The original Wide Awakes were led by young men—and some women, who did not yet have the right to vote—and cultivated by the Republican Party (Lincoln's political party) during the 1860 presidential election. Appearing at popular social events and distributing promotional comic books and art ephemera, the group appealed to a younger generation of voters beleaguered by the partisan infighting of the 1850s and offered northerners a much-needed political identity in the face of regressive southern policies.

As a wave of racial reckoning swept the US, the Wide Awakes held large rallies in northern cities such as New York, Chicago and Philadelphia, turning out in distinctive uniforms consisting of a black cape under standard banner depicting the image of a large eyeball. After Lincoln’s inauguration, when political tensions escalated to civil war, many of the Wide Awake members were among the first wave to join the Union army. 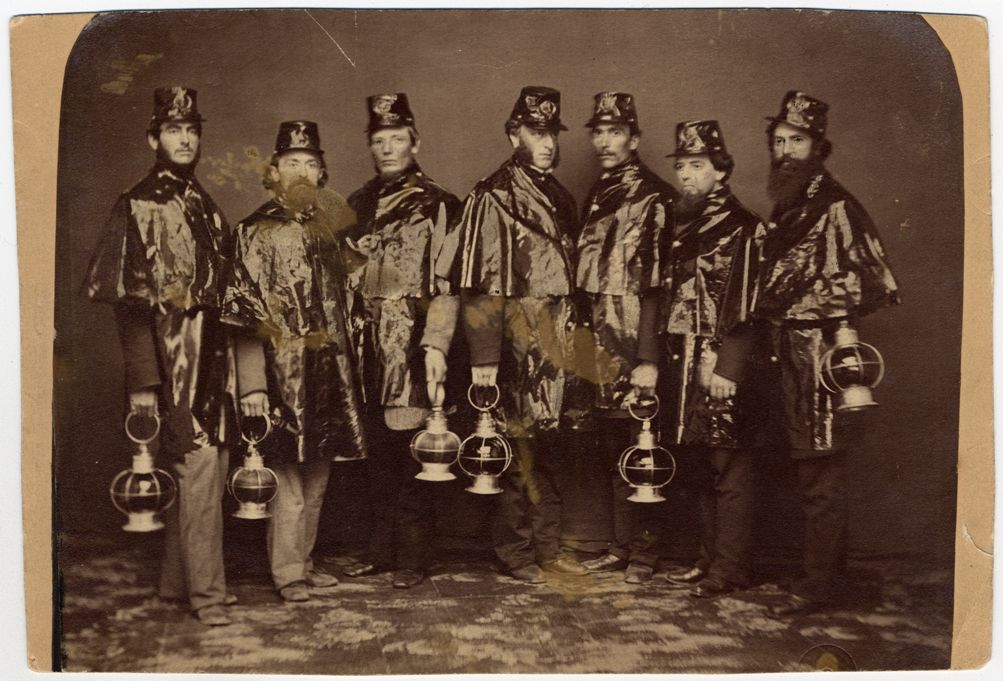 The group has been active since before the Black Lives Matter protests began in late May but, since then, members have popped up at a Juneteenth celebration in Harlem; Fourth of July protests in New York, Berlin and Chicago; a 19th amendment rally at Grand Army Plaza in Brooklyn, and at the March on Washington commemorating the Dr. Martin Luther King's march for civil rights. On Election Day, 3 November, the Wide Awakes will also hold a virtual poll party. 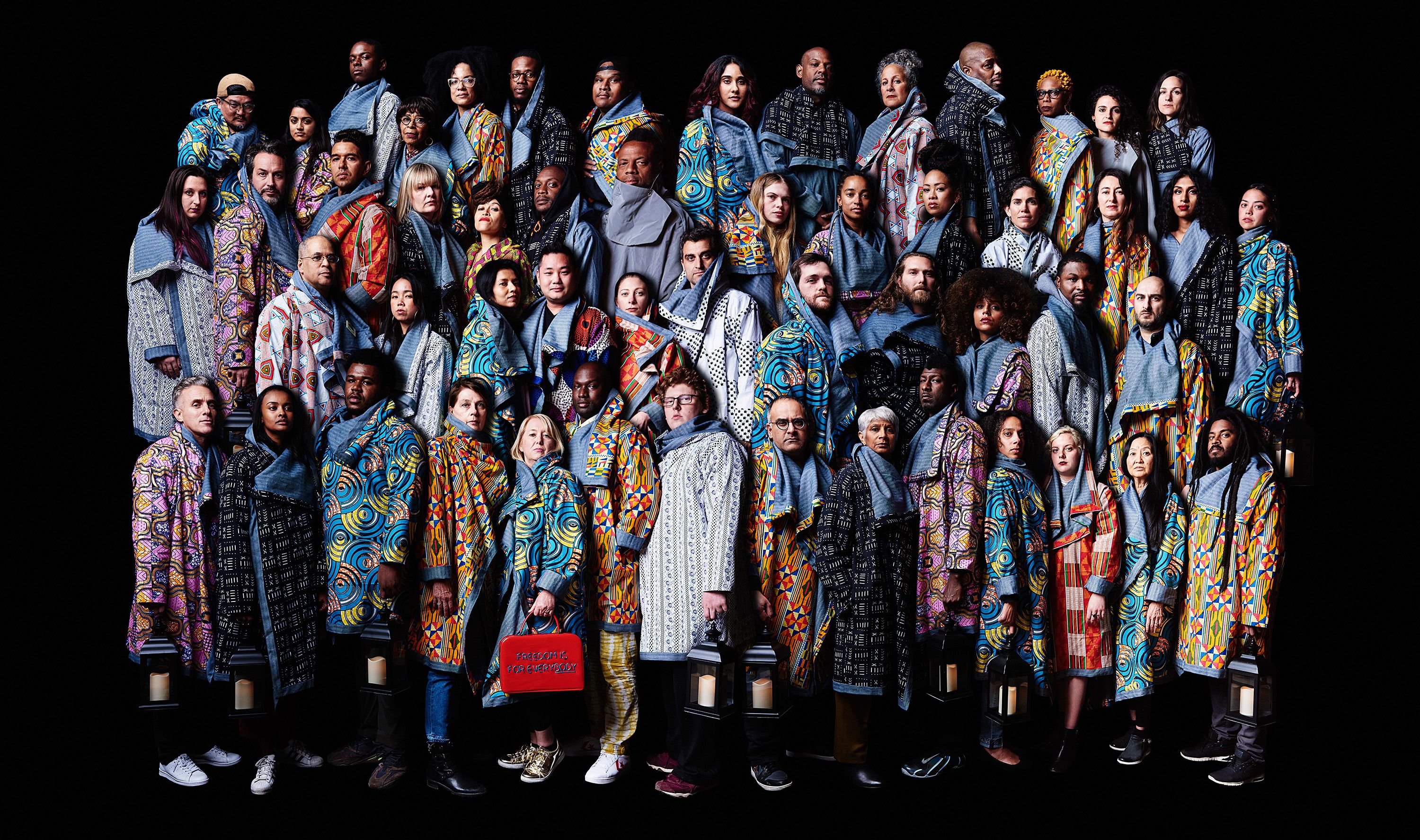 Funds raised from its Kickstarter will be divvied up between the 14 organisations, which include Kindred Arts, In Plain Sight, Amplifier and more. A full list can be found at the Kickstarter page, where donations can also be made. Pledges made to the Wide Awakes come with varying rewards. At the smaller donation level, a $15 pledge yields a Wide Awakes pin while a t-shirt by Jenny Holzer is available for $45. For donations over $7,500, donors can receive an original rafa esparza sculpture, a work of art by Michele Pred or a silkscreen by Thomas, produced in an edition of five. Black capes with the Wide Awake eye are available for an $85 pledge.