Around 160 institutions hold looted Benin artefacts, but how many are prepared to give them back? We asked museums in five countries for their position on restitution 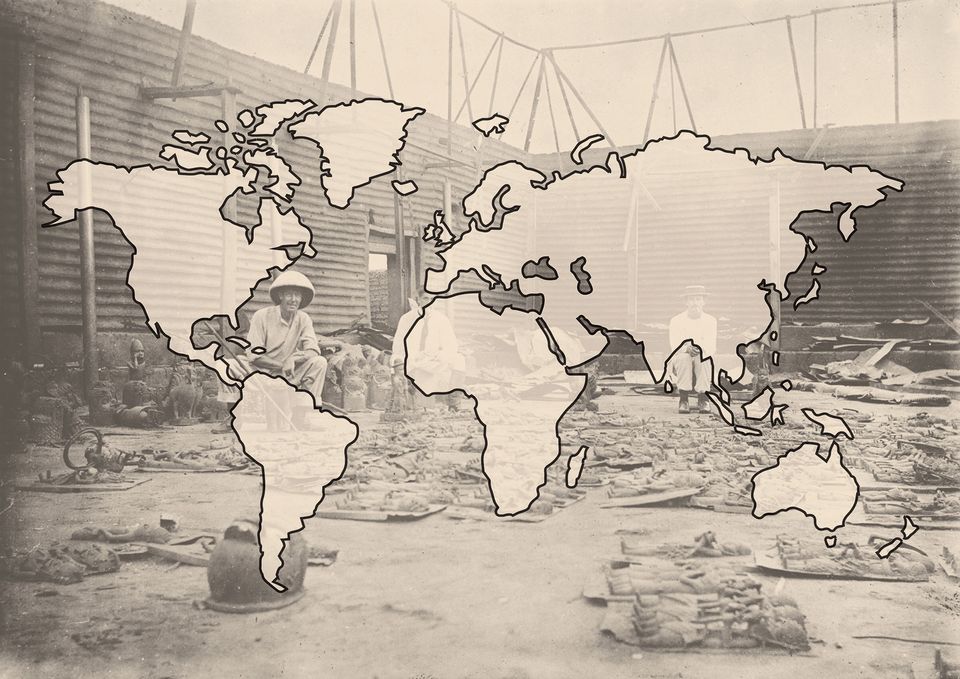 Germany set the stage for a global movement to restitute colonial loot with its March announcement that it plans to hand over the Benin bronzes to Nigeria. The return of the treasures—which were looted in a British military attack on the royal palace of Benin in 1897—from as many as 25 German museums is part of a bilateral deal that will also involve Germany in archaeological excavations and the construction of a new museum in Benin City.

The agreement, which is expected to be finalised in the coming weeks, marks “an important turning point”, says Yusuf Tuggar, the Nigerian ambassador in Berlin. “It is not just an agitation on the African side; it’s an agitation also on the European, the North American side. You have European curators, museum directors, government officials, diplomats and intellectuals saying, ‘Look, you have to return these things.’ Germany is likely to be a trailblazer in this.”

As many as 160 museums and institutions around the world hold artefacts looted from the kingdom of Benin in their collections. The Art Newspaper asked museums in five countries for their position on the restitution debate and whether they too are preparing to return Benin objects to Nigeria and its future Edo Museum of West African Art. 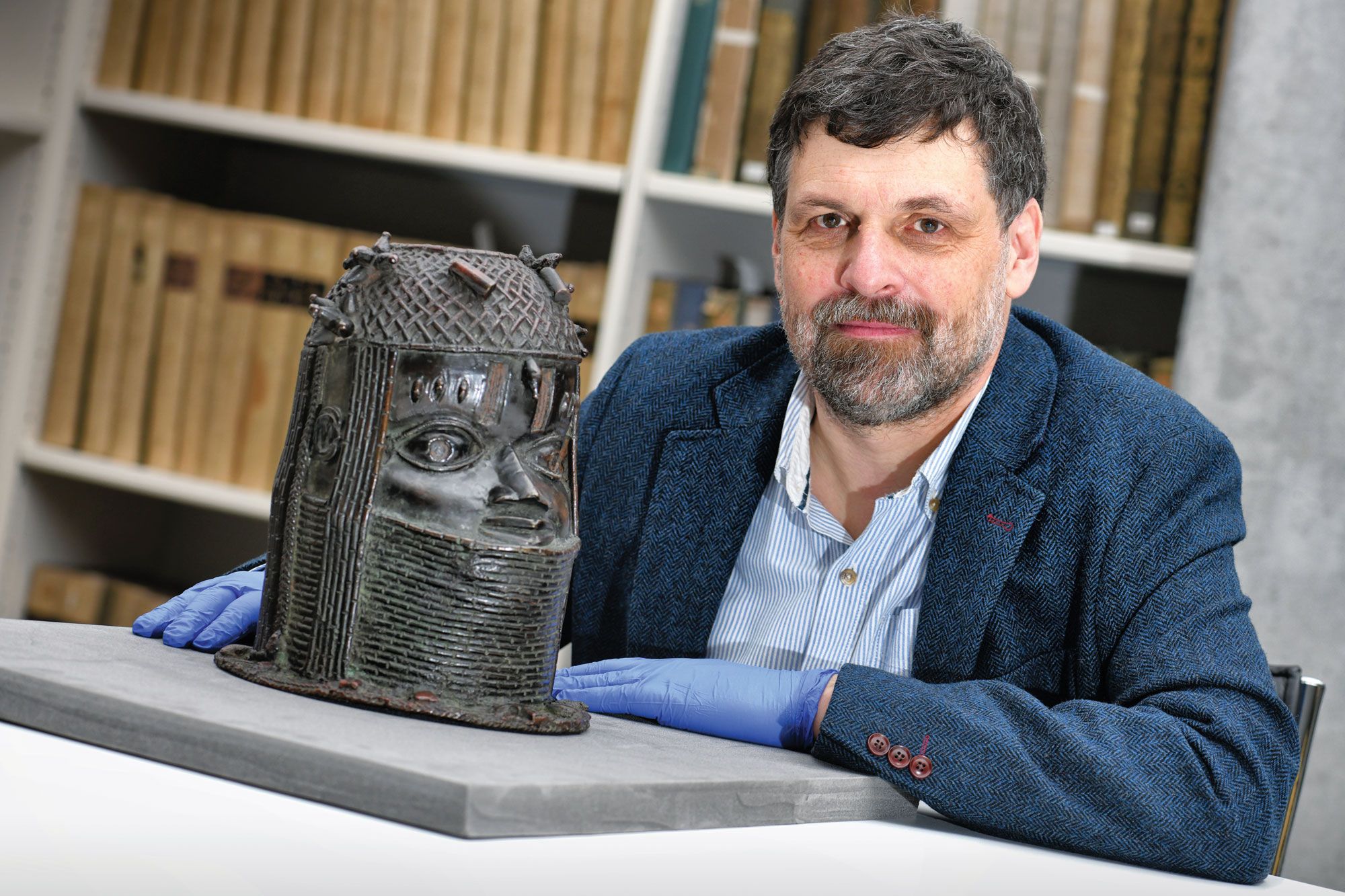 Days after Germany’s announcement, the University of Aberdeen became one of the first institutions in Europe to commit to restituting a Benin bronze, saying that the head of an oba (king) in its possession was “acquired in a way that we now consider to have been extremely immoral”. Jesus College at the University of Cambridge has also pledged to return a bronze cockerel.

Around 45 British institutions hold looted artefacts from Benin. The Horniman Museum in London has introduced a process for addressing restitution claims but says it has “received no repatriation requests, which means that no definitive decision has been reached about repatriation of any object”. The museum has 26 items from Benin in a display that gives details of their forced removal and contested status.

The Church of England is also in discussions with Nigerian authorities about two Benin busts in its collection that were not looted but gifted to the then Archbishop of Canterbury in 1982.

The British Museum has one of the largest collections of Benin bronzes in the world, with more than 900 pieces, but it is prohibited from removing items from its collection under the British Museum Act of 1963. In a statement, it says only that “the devastation and plunder wreaked upon Benin City during the British military expedition in 1897 is fully acknowledged by the museum and the circumstances around the acquisition of Benin objects explained in gallery panels and on the museum’s website”.

The museum is nevertheless part of the Benin Dialogue Group, which brings together Nigerian representatives with curators of the main European museums holding Benin material. This has led to a joint archaeological project with the Legacy Restoration Trust, the newly formed Nigerian body overseeing the planned Benin City museum.

The trust’s director, Phillip Ihenacho, says: “If we were not confident that there would be the return of objects from the British Museum, it would be difficult for us to partner with them.” 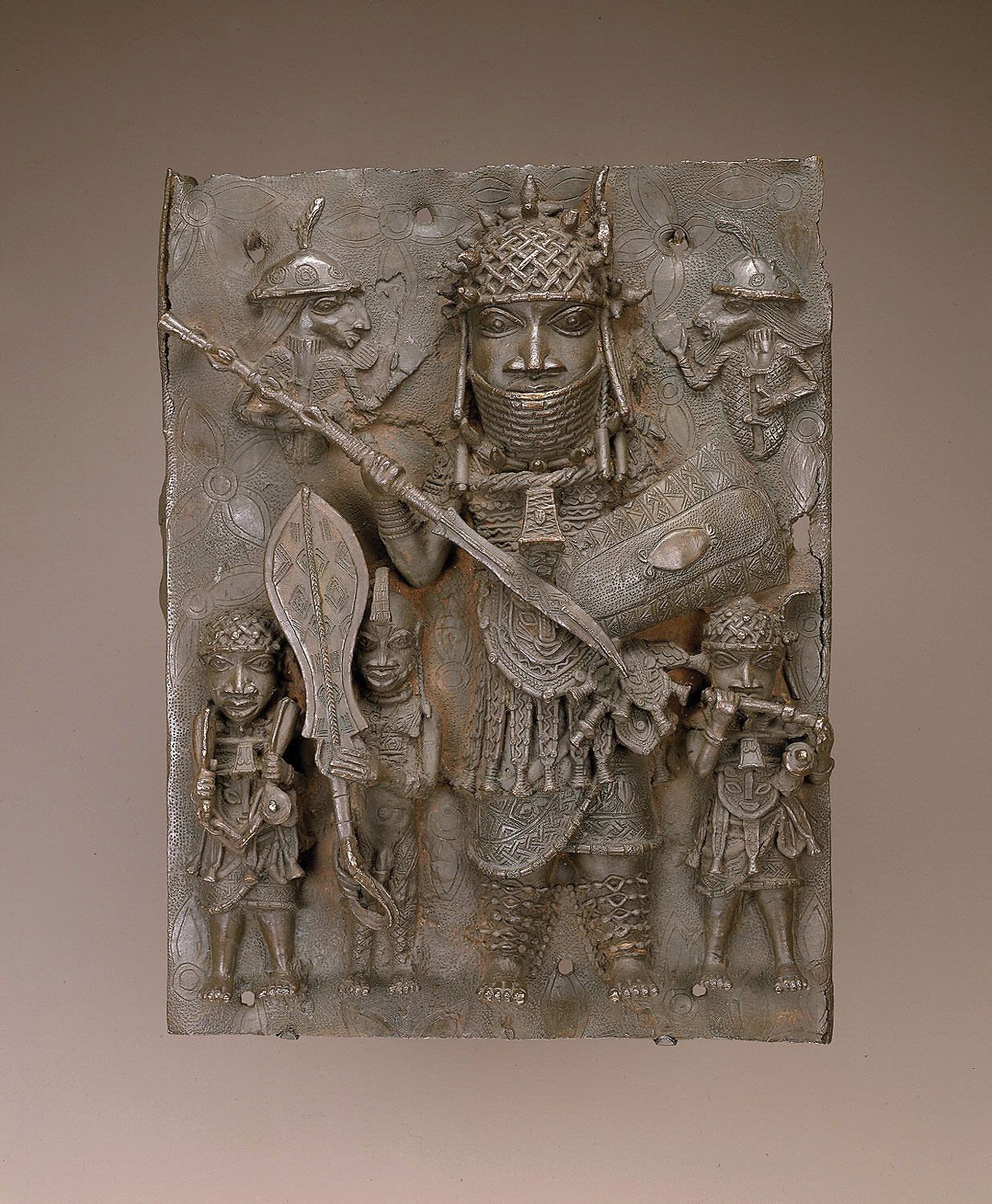 Benin artefacts are scattered between 38 US institutions, which have been largely absent from the restitution debate until now. But momentum is building. The Fowler Museum at the University of California, Los Angeles “is committed to developing a process for considering the repatriation and restitution of African objects in its collection”, says the director, Marla Berns. “Our expectation is to begin discussions with authorities in Nigeria about the disposition of the 18 Benin objects in our collection in the coming months.”

Christine Mullen Kreamer, the chief curator of the Smithsonian’s National Museum of African Art, suggested at a Columbia University conference on 9 April that the museum could lead restitution discussions among US institutions with Benin items. Another conference planned for June could be the occasion to establish a working group, she said. The National Museum of African Art holds 42 objects from the kingdom of Benin; provenance research is ongoing.

Other US museums we approached say that they are conducting provenance research, or are not yet ready to commit to restitution.

The Cleveland Museum of Art has eight works from the kingdom of Benin on view in the African arts gallery, five of which are thought to have been looted in 1897. The provenance of the remaining three is not yet clear. “As all of these works are undergoing further research, the museum is not in a position to make a statement as to any future actions,” a spokesperson says.

Similar statements came from the Museum of Fine Arts, Boston, which has 32 Benin objects on show in a dedicated gallery, and the Baltimore Museum of Art. A spokesperson says the Baltimore museum is “following the discussions and debates about repatriation of artworks from the Benin kingdom very closely”, and is currently updating its own policies.

The Metropolitan Museum of Art in New York holds around 160 objects traceable to the 1897 looting. A spokesperson says these “were largely given to the institution… in the 1970s and 1990s by individuals who acquired them on the art market”, but declined to specify the Met’s view on restitution. 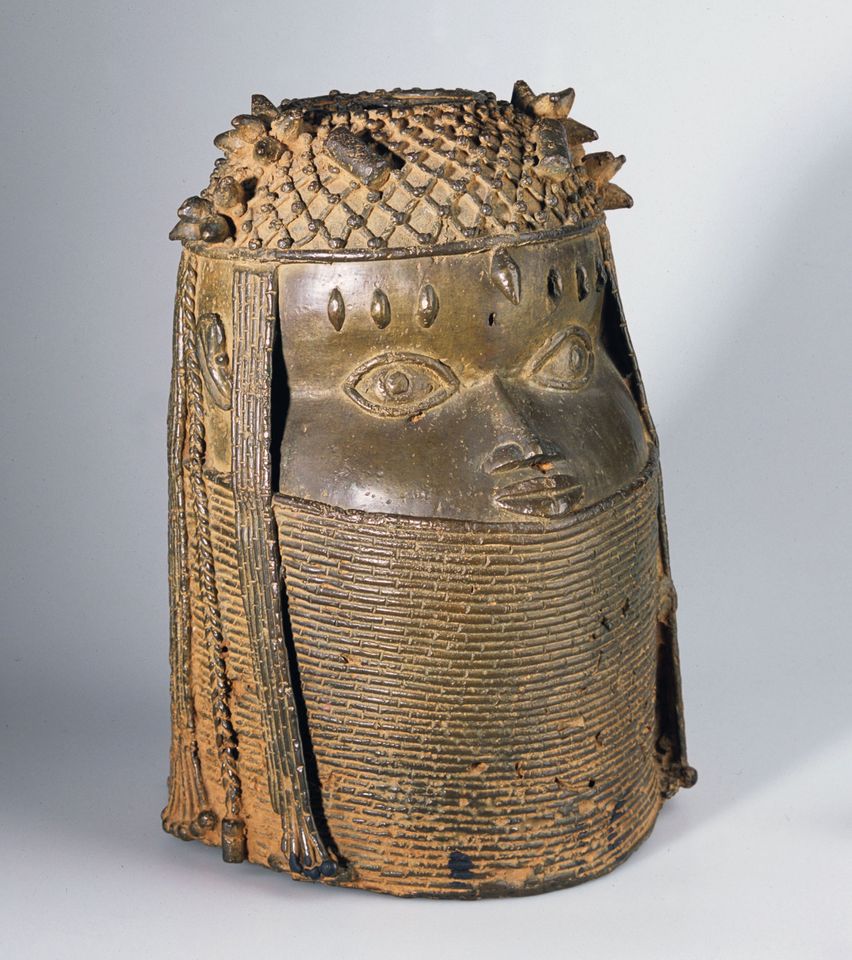 The Dutch National Museum of World Cultures has traced 114 objects in its collections, including this bronze head, to the British military raid on Benin City in 1897 © Nationaal Museum van Wereldculturen

The National Museum of World Cultures holds 114 pieces that can be definitively traced to the British military raid on Benin City. A provenance report published recently on its website indicates that a further nine Benin items purchased on the art market may also have been looted; research into these is continuing.

The institution, which comprises museums in Amsterdam, Leiden and Nijmegen, and oversees the city of Rotterdam’s collection at the Wereldmuseum, published a “commitment to transparently address and evaluate claims for the return of cultural objects according to standards of respect, cooperation and timeliness” in 2019. It has been a member of the Benin Dialogue Group since 2010.

The museum requires government approval before restituting any items in the Dutch national collection. In January, the Netherlands became the first country in Europe to approve a central mechanism for repatriating stolen cultural heritage and pledged to return, unconditionally, any objects in national collections that were looted from Dutch colonies. Claims for objects looted from other countries’ colonies—such as the Benin bronzes—will be assessed on a case-by-case basis by an independent panel.

The Dutch policy has yet to be debated in parliament. At press time, negotiations to form a new government after March elections were still ongoing. 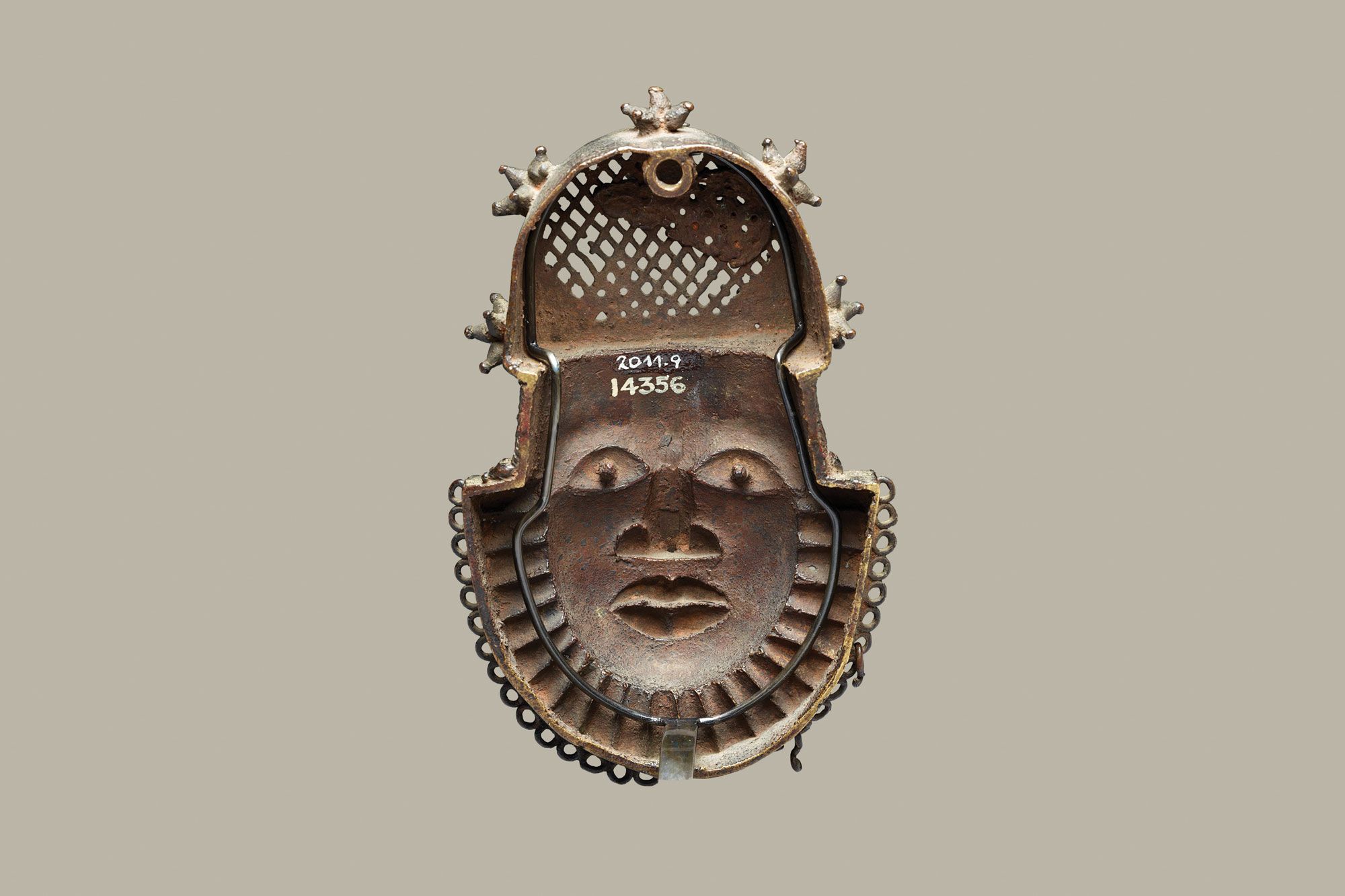 The reverse side of a hip mask from the kingdom of Benin in the Museum Rietberg, Zurich, which is leading a new project to research the provenance of 97 Benin objects in eight Swiss museums © Museum Rietberg

Eight museums have formed the Swiss Benin Initiative to investigate the provenance of their Benin collections in a research project funded with CHF100,000 ($109,000) by the Federal Office of Culture. The project begins in June, coordinated by the Museum Rietberg in Zurich, and will involve collaboration with Nigerian partners.

The seven other members are the Bern Historical Museum, the ethnographic museums of St Gallen, Geneva, Neuchâtel and Zurich University, the Museum Schloss Burgdorf and the Basel Museum of Cultures. Together they possess 97 objects from the Kingdom of Benin; around 40% were acquired during the colonial era. Some are known to have been looted in 1897 but the provenance of others is unclear.

“Each museum has quite small collections of between three and 20 pieces, so we thought we would join forces instead of all conducting individual research,” says Esther Tisa Francini, the head of provenance research at the Museum Rietberg. She is co-leading the project with Michaela Oberhofer, the curator of African collections.

A detailed report, which will address the question of restitution, is expected to be published when the project concludes in summer 2022. 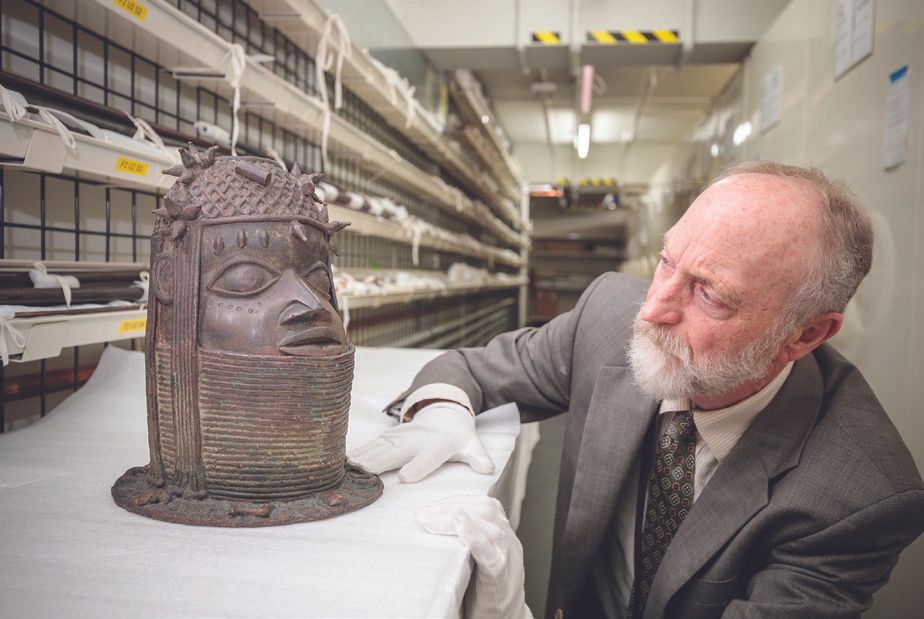 Benin bronzes travelled as far as Christchurch, where the Canterbury Museum has the largest collection in New Zealand or Australia. The museum possesses 17 items of Benin art, including ivory and bronze figurines, bracelets, amulets and three bronze heads.

Most can be traced back to the attack on Benin. Twelve were purchased at auction in London in 1898, and a further two in 1901. “The museum has not received any requests to return the objects,” a spokesperson says. “If we did, we would consider the request carefully as we do any request to return taonga (treasures) to their country of origin.”