Due to Covid-19, the number of planes being scrapped could double to 1,000 a year by the end of 2023, up from 400 to 500 planes annually since 2016, according to data released by the aviation analytics firm Cirium last September. So why not turn them into affordable housing instead, propose Victor Hugo Azevedo and Cheryl Lu Xu of Robert A. M. Stern Architects, New York. Their drawings, titled Aeroplane Tower and executed in Autodesk Sketchbook for the iPad Pro, have won the special Lockdown Prize in the 2020 Sir John Soane’s Museum Architecture Drawing Prize.

The judging panel spanned fine art and architecture, with Narinder Sagoo of Foster & Partners, Ken Shuttleworth of Make Architects and Lily Jencks of LilyJencks Studio and the AA School of Architecture; Louise Stewart, curator of exhibitions at the Soane museum; the artist duo Ben Langland and Nikki Bell, and artists Pablo Bronstein and Gary Simmons. They thought Aeroplane Tower was both witty (they especially liked how the tail fins with the airlines’ showy logos stacked up as a decorative element) and serious, not to mention media-friendly too. 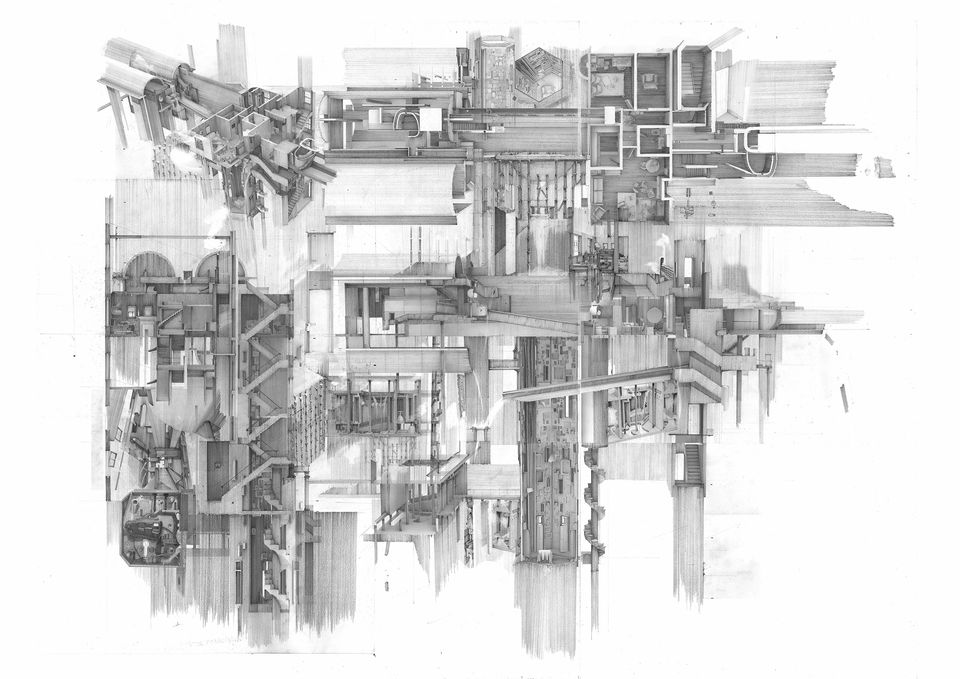 Apartment #5, a Labyrinth and Repository of Spatial by Clement Laurencio © World Architecture Festival

This has been the fourth year for a prize that aims, says the museum’s director, Bruce Boucher, to demonstrate a continuity between the practice of architects in the past, including Sir John Soane himself, whose collection of 30,000 drawings, from Renaissance masters to those by his own hand or his pupils, constitute a great part of the museum’s treasures.

Do people still draw? The answer is very much yes, said Shuttleworth at the online award event on 28 January: “The fact that we draw as architects very much defines us; no one can stop us drawing.” Indeed, the largest percentage of the 165 submissions from 30 countries this year was of hand drawings, the other categories being digital and hybrid. 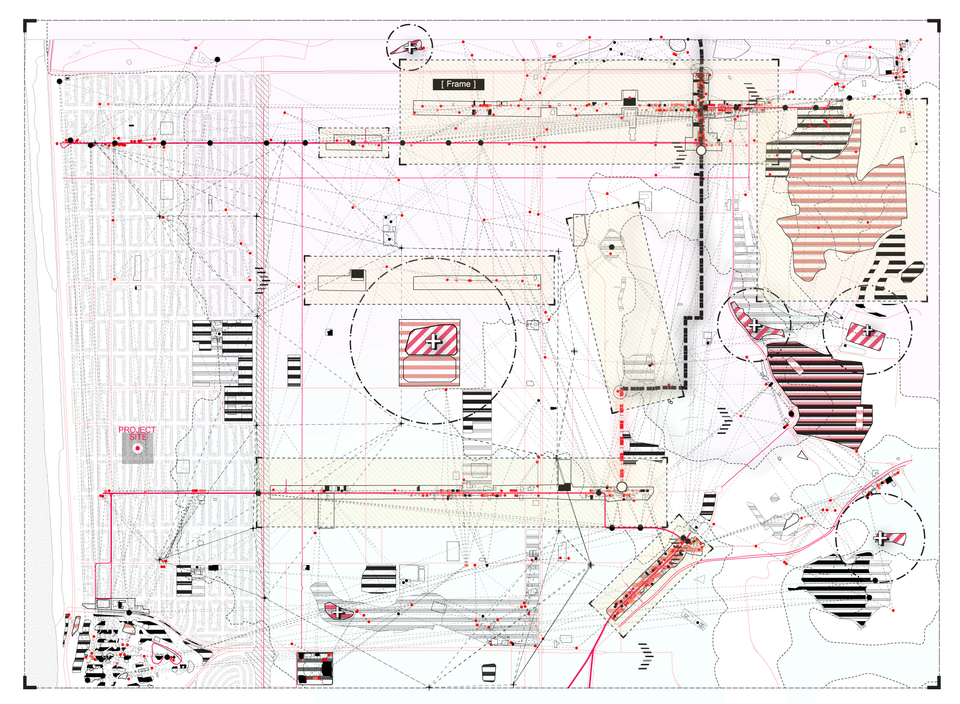 Clement Laurencio of the Bartlett School of Architecture, London, was the overall winner and winner in the hybrid category, with his Apartment #5, a Labyrinth and Repository of Spatial Memories drawn in pencil and manipulated digitally. As life locked down in March last year, Laurencio realised he would not be able to travel except in his mind, so he remembered buildings by Le Corbusier that he had seen recently in India and tried to consolidate flashbacks, including photos, even of the key-hole of his door. He then made 30 pencil drawings in A3, scanned and digitally composed them as a kind of dolls house—a hugely detailed labyrinth of spatial memories. “An apartment is a vessel in which our memories cohabit,” he said.

The winner in the digital category was Chenglin Jin, of the University of California, Berkeley, with a drawing in the form of a site analysis called Re-reading Metropolis, executed in Rhinoceros 3D and Adobe Illustrator. It is a proposal for San Francisco’s Sunset District, aiming to create connections between residential and commercial areas like a kind of map—the hatched parts, for example, being the public spaces, while the dots are businesses. “There are many different layers in how the drawing was worked up,” said Chenglin. 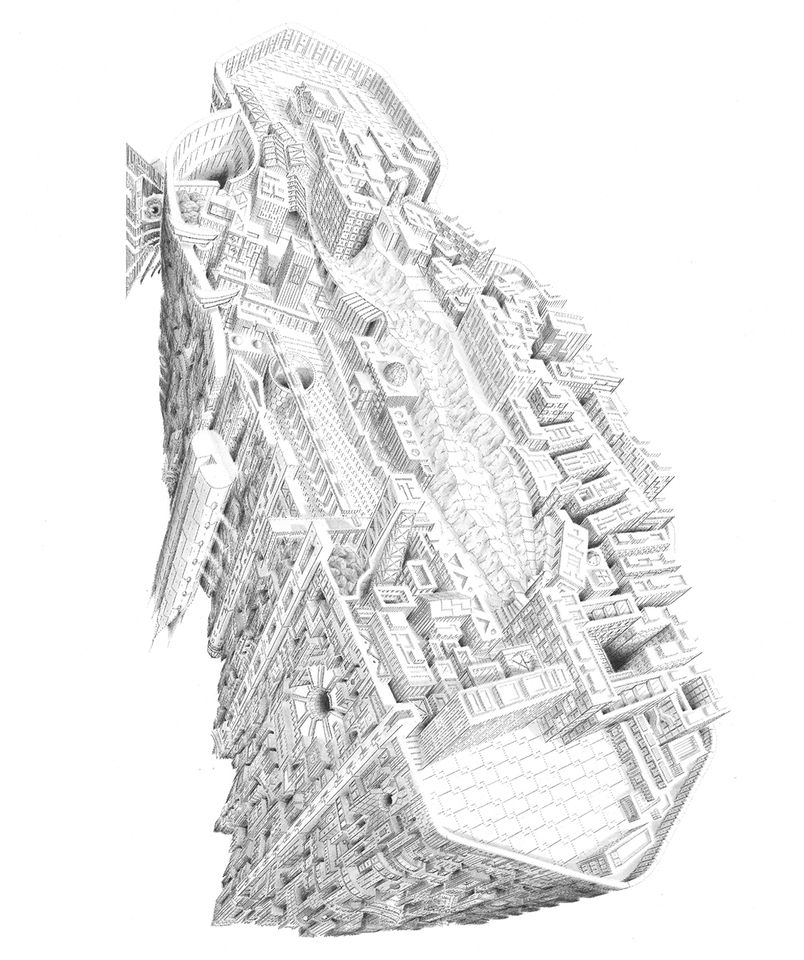 Marc Brousse, an artist-architect from Bordeaux, won the prize in the hand drawn category with Dear Hashima, an amazingly dense drawing in ink, charcoal and invisible ink that makes the island of Hashima off Nagasaki look like a space station.

Many people will be familiar with this industrial island crammed with buildings, abandoned in 1974 when its coal mine was exhausted, because the villain in the 2012 James Bond movie Skyfall has his headquarters there. But Brousse has chosen it to be one of his urban expressions of utopia, from the ancient world to the future. He refers to the drawing technique he has used as “traitillism”, a mass of short vertical strokes, with a second layer of invisible ink beneath, which revealed in UV light, “represents the soul of the city”, he says.

The winners and the runners-up would normally have been exhibited in the museum, but this year they have been on show in an airy and sunlit virtual gallery by Make Architects. Covid-19 permitting, they will be physically shown at the World Architecture Festival from 1 to 3 December 2021 in Lisbon.