With unemployment at an historic high, America's art workers band together

Labour organising is building across the culture sphere. Could an industry-wide arts union be next? 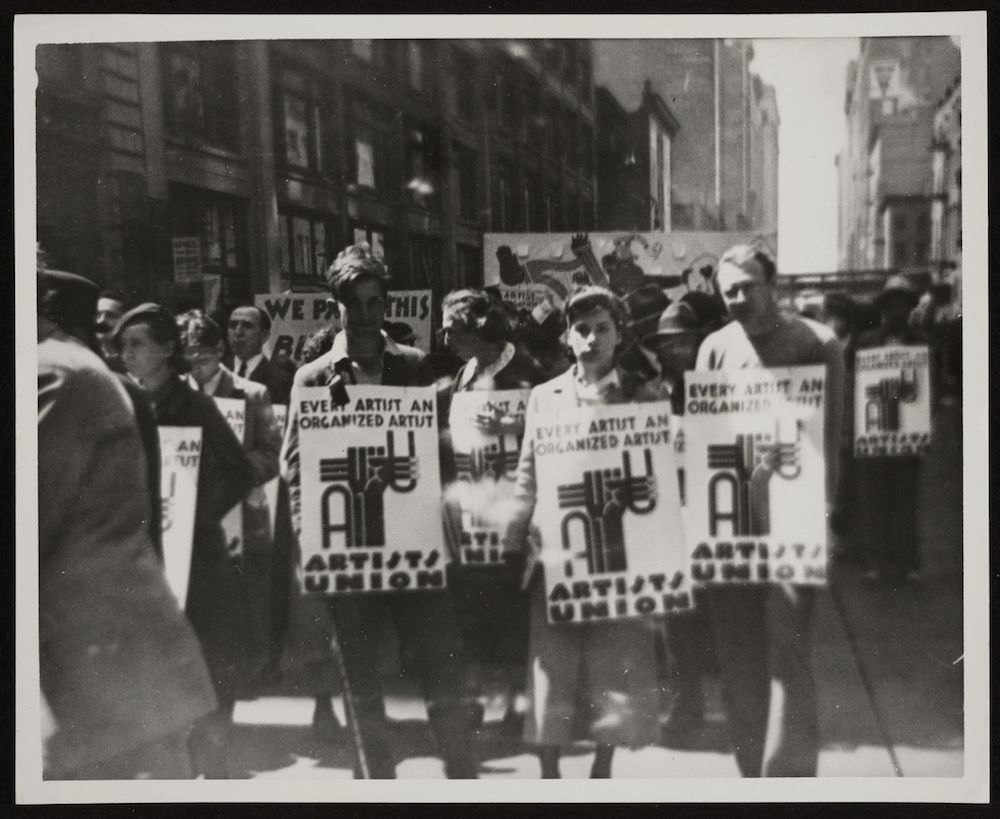 In the 1930s, the Artists’ Union was instrumental in creating the Works Progress Administration’s Federal Art Project Irving Marantz; courtesy of the Smithsonian Institution

The Covid-19 crisis has laid bare the precarious employment of millions of Americans over the past five months and the cultural sector has proven to be especially vulnerable. Major museums, commercial galleries and other art businesses across the US have all made extensive layoffs, often nearly 25% of their staff. Meanwhile, events such as biennials and fairs have been indefinitely delayed if not entirely cancelled, producing a knock-on effect of job losses within the service and hospitality sectors—in which many art workers find part-time jobs to supplement their income.

A report published last month by the Brookings Institution, a Washington, DC-based think tank, estimates that around 2.7 million jobs have been lost in the creative industries nationwide. Fifty per cent of those are in the fine and performing arts, which include the visual arts, music, theatre and dance.

The looming unemployment crisis has raised calls for more government-funded work programmes that take their cue from the Works Progress Administration Federal Art Project (WPA/FAP), instituted during the Great Depression, and the Comprehensive Employment and Training Act (Ceta) of the 1970s recession. But it has also emboldened cultural workers, especially those concerned about holding on to their jobs or who have seen many of their peers laid off, to join a growing labour movement. There is even discussion of creating a new union aimed specifically at the art trade. The move has some precedents: the Artists’ Union, created in the 1930s and involved figures such as Mark Rothko, was instrumental in the creation of the WPA. And the Art Workers’ Coalition, founded in 1969, included artists such as Takis, Carl Andre, Leon Golub, Hans Haacke, Lucy Lippard, Howardena Pindell, Faith Ringgold, and Nancy Spero. It pressured museums to diversify their exhibition policies and take a moral stance against the Vietnam War.

“There is so much organising happening within and without of the art world right now,” says Dana Kopel, the New Museum union’s former unit chair and the museum’s former senior editor and publications co-ordinator, who was laid off in June. “People are realising that collective action is what begets change.”

A sense of trepidation around unionising persists, however, especially when job security in the arts is already shaky. “It seems it’s just a pathway to getting terminated. This is a country of ruthless employers,” says Ryan Douglas, who works for a New York-based employee stock-owned framing company. Douglas says unions can have a lot of power but, more often than not within the art trade, joining “can make you into a sacrificial lamb”.

Indeed, the New Museum union is a useful case study for the pros and cons of labour organisation. The union has had tense relations with the institution since its founding in early 2019, having only secured a contract with museum leadership last October. In June, the institution laid off 18 full- and part-time staff members, from 41 employees it had furloughed in March just after a Covid-19 lockdown went into effect in New York. 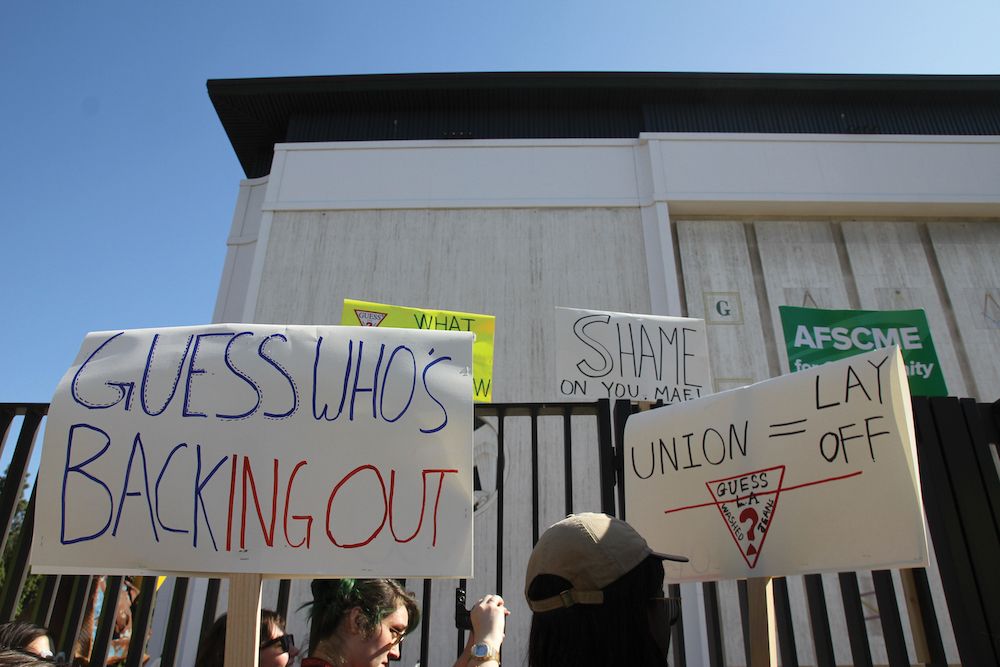 The union claimed its members were “targeted” by management when the layoffs were made, and in August it filed a complaint with the National Labor Relations Board alleging that the institution laid off and furloughed bargaining unit (union) members in a “discriminatory and retaliatory act”. The complaint followed an announcement from the museum that it would reinstate 23 workers who had been furloughed in anticipation of an autumn reopening; around a dozen full-time union employees were brought back in the visitor services and gift shop departments .

In response to the complaint, the New Museum said that it not only honours the union contract but is “even at times exceeding some of the terms of that agreement”, and it notes that its executives have taken salary cuts that will continue through the next fiscal year to buttress its besieged budget.

But after a New York Times report in August examined the salaries that top executives at major US museums receive, questions have been raised about whether such reductions go far enough. Topping the list was Glenn Lowry, the director of the Museum of Modern Art (MoMA), who received $5.1m last year (including a one-time retirement plan payout of $3m). The bulk of directors at other nationally recognised institutions, such as the Guggenheim and the Whitney Museum of American Art, hovered around the $1m mark. MoMA has laid off all 85 of its contracted educators and reduced its permanent workforce from 960 to 800 through voluntary retirement and attrition, while the Guggenheim furloughed 92 workers, and the Whitney laid off 76, primarily visitor services staff and temporary employees.

The high salaries of museum leaders, even if reduced, are like salt in the wound for many workers who have been laid off in the pandemic. Maida Rosenstein, the president of the UAW Local 2110 union, which now has units at the New Museum, MoMA PS1 and the Brooklyn Academy of Music, says that when the “top guys continue to be in place and earning a million dollars a year”—while the rest of the workforce suffers—“it’s very concerning”.

It is not just economic disparity that unionising staff are taking aim at: they are also seeking greater diversity in hiring, especially in senior positions, and more transparency in museum operations and funding. And their efforts seem to be gathering momentum. In a milestone 89% supermajority decision, more than 300 employees at the Philadelphia Museum of Art (PMA) voted in early August to join the American Federation of State, County and Municipal Employees District Council 47 union, creating the first “wall-to-wall” labour union at a major US museum, which will represent employees across all departments and services. The announcement came after a year-long organising campaign that took issue with the museum’s management, and just days after the institution cut more than 100 jobs.

As of last week, however, the Milwaukee Art Museum (MAM) has denied voluntary recognition of its newly formed worker's union, cancelling a meeting planned between the union and the museum. Members of the union have now filed a complaint with the National Labor Relations Board. The workers' campaign to create their own wall-to-wall union began in December, citing pay disparities, a lack of diversity in management positions and “a culture of privilege” among their reasons for organising. Despite pandemic-related furloughs, the union has been collecting signed cards from all MAM employees who want to be represented, regardless of their employment status; card signers now number around 150.

“The pandemic has made clearer to people the risks and contradictions of working in the art world,” Kopel says.