Dressing for success, an artist helps women demand their due

Michele Pred is asking artists, their dealers and potential collectors to commit to a price hike for works of art by women

Some people look like they are made of money. Then there is Oakland artist Michele Pred, ready to make the rounds at Frieze this week in a dress covered with dozens of pink dollar bills, each stamped: “EQUAL PAY”. Her appearance is the kick-off to a larger project in which she asks women artists to raise their prices by 15% on the same day—31 March, Equal Pay Day in the US—in a concerted, attention-getting attempt to close the gender pay gap for artists.

Best known for politically pointed work like her feminist-slogan handbags, Pred hopes that this project, The Art of Equal Pay, will effect some real-world change. “I felt that I needed to do something even more action-oriented this time,” she says. “For me, the pace of change on this important issue is agonisingly slow.”

At this stage, she is asking women artists, their dealers and potential collectors to sign a pledge on her website, theartofequalpay.com, to participate in the 15% price hike in March. Admittedly, the figure is symbolic (according to national studies, women on average make 79 cents for every dollar earned by men in the US) and probably less than the actual pay discrepancy for works sold directly by artists or through their galleries, since those numbers are not readily available. “We know the price gap between men and women artists sold at auction—around 47%,” Pred says. “But I didn’t want to use that number because artists don’t actually earn anything from auction sales.” 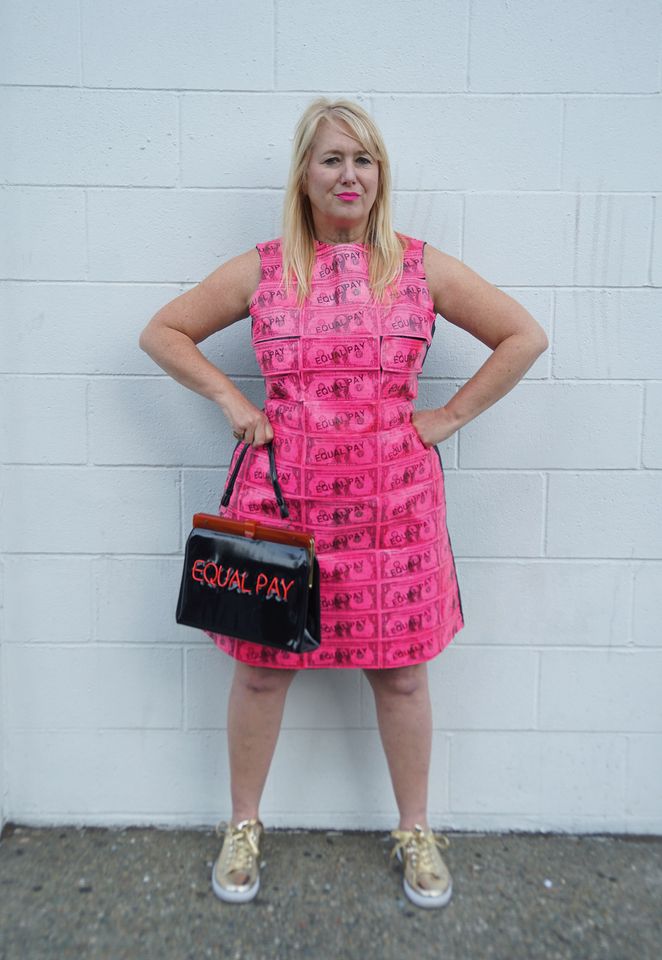 Pred hopes to have better data points on gallery sales to use later this year from Taylor Whitten-Brown, a sociologist and data scientist working on this issue for her dissertation at Duke University. Until then, there is plenty of anecdotal evidence from her own career and from friends. “Historically as women, we tend to underestimate the value of our labour,” she says. “There’s this sense of: am I really worth it? It’s an issue I’ve dealt with all of my career—I tend to price my work on the lower side.”

So, is the dress itself for sale? Pred says she made the one she is wearing for her own performances but she is making another to sell in her upcoming show at Projects+Gallery in St Louis. “The price tag will be $8,000—and 15% more after 31 March.”