Works of art in Venice museums and the Biennale undamaged by floods, but major attrition to buildings with great loss of private property

Most cultural institutions open to the public again today 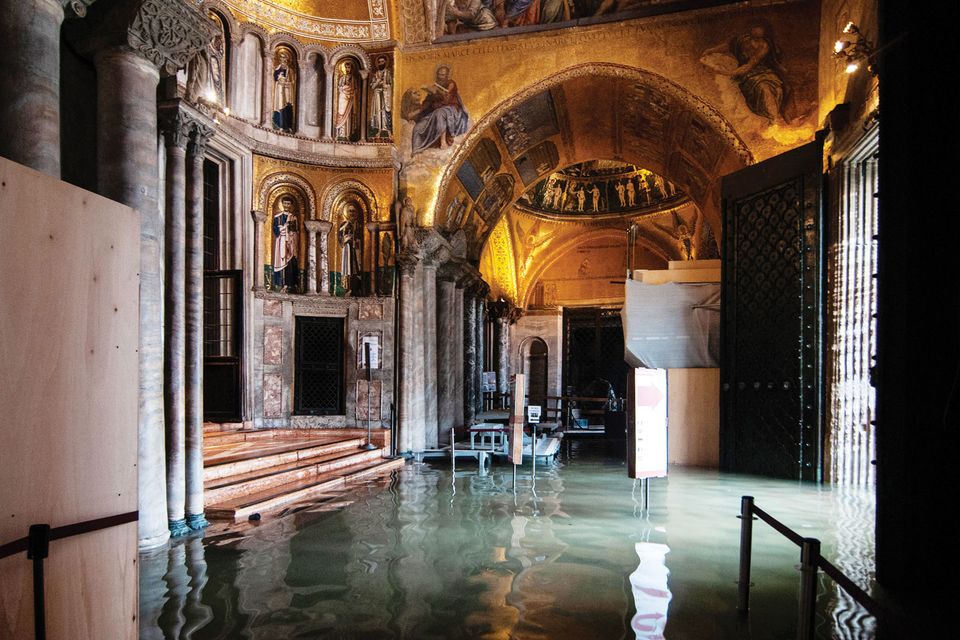 The Basilica of San Marco's crypt was half filled with water and the narthex flooded to a depth of 70cm Photo: Simone Padovani/Awakening/Getty Images

The storm surge that brought flooding of 187cm above mean water level to Venice on the night of 12-13 November, with more flooding expected every day until 16 November inclusive, has not damaged works of art in the city’s museums and in the Biennale’s main sites. The cost to house owners, hoteliers and shop keepers will, however, be huge because, with 80% of the city under water, nearly all ground floors have been flooded. The various seats of the Università Ca’ Foscari are all closed because of damage to their services, while the retaining wall of the island, San Servolo, which houses Venice International University, has partly collapsed.

The consequences of these days’ events will be longterm. While plumbing and electrical services can be repaired relatively easily, the immersion of bricks and marble in saltwater gradually erodes the fabric of the whole city. No survey has yet been conducted of the city’s many churches, nearly all of which are artistically important in one way or another, and have nearly all been invaded repeatedly by water.

The Basilica of San Marco, which is the lowest-lying building in Venice, has once again been invaded, with its crypt half filled with water and the narthex flooded to a depth of 70cm. “We are essentially unable to protect ourselves”, said the engineer Pierpaolo Campostrini, one of the basilica’s procurators, who is investigating exceptional measures to isolate the church, because he believes that they cannot wait for the flood barriers to be completed.

The Biennale announced that no works of art in its two main seats, the Giardini and the Arsenale, had been damaged, although water did invade a few of the pavilions, and the force of the water demolished retaining walls on the lagoon side of the Giardini. No survey has yet been done of works in the outlying national “pavilions” and collateral events scattered all over town.

Both the civic and state museums, which include top attractions such as the Accademia, the Ducal Palace and Correr Museum, also said that no works of art had been damaged.

Most of all these cultural institutions are reopening to the public today with the remainder on 15 November.