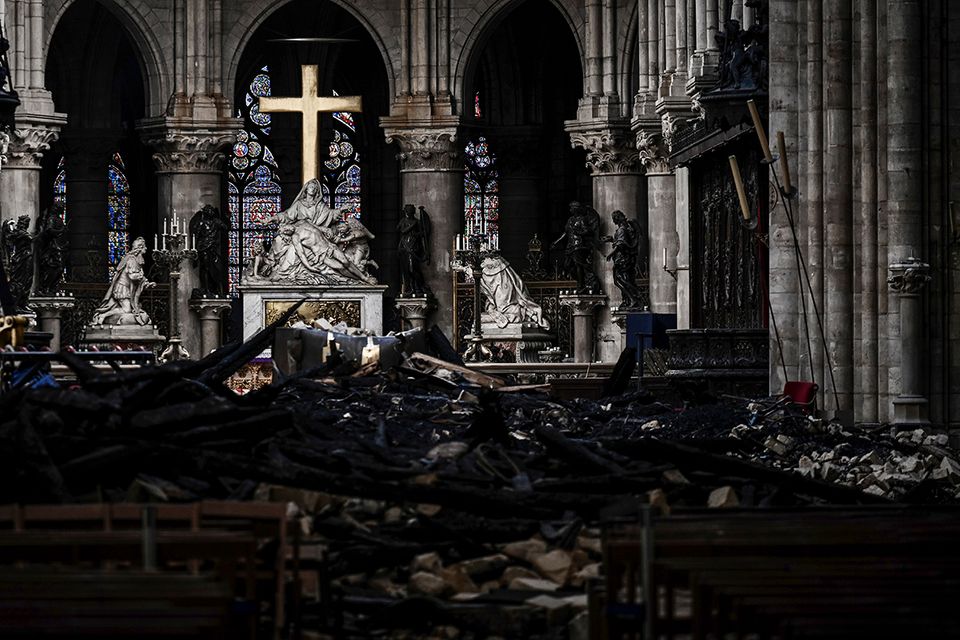 Rubble inside Notre Dame one month after the fire Photo: Philippe Lopez/Pool via AP

Unesco’s World Heritage Committee will not discuss the fate of Notre Dame de Paris at its 42nd annual meeting due to start on 30 June in Baku, Azerbaijan and run through 10 July. France was not able to deliver a full report in time for the event on the devastating fire that the church suffered in April, only providing an explanatory note on the immediate measures taken to secure the medieval building three weeks before the opening of the meeting. These include the launch of a national fund and the creation of a public entity to conduct the works. Experts also noted "with satisfaction" the evacuation of the treasures of the cathedral during and after the fire.

Today, the Notre Dame Foundation announced that the scaffolding surrounding collapsed spire of the church, which was undergoing a renovation when the fire struck, will begin to be dismantled within the coming weeks. The process, an important early step in the restoration, is expected to take four months, the head of the non-profit, Christophe-Charles Rousselot, told AFP.

The French state, which is in charge of cathedrals, has pledged to provide a report before 1 December and the committee now plans to discuss the matter in June 2020. However, a draft decision will be presented by the committee in Baku reminding France that “the restoration works must be in conformity with the provisions of the World Heritage Convention”.

France's president Emmanuel Macron caused some alarm by promising that the church, part of the World Heritage site Paris, Banks of the Seine, would be reconstructed in five years in time for the 2024 Summer Olympics in Paris, and passing a special bill putting aside all regulations for urban and heritage protection. The French government has not yet adopted legislation on the reconstruction.

Unesco underscores that all proposals for safeguarding and restoring the Gothic masterpiece must be discussed in advance with the experts and the Committee, which has appointed three experts to initiate this “dialogue”. Without referring to the controversies around the project for a new spire and the modern materials which could be used to rebuild the roof, the draft also stresses the “opportunities for the enhancement of traditional savoir-faire”.