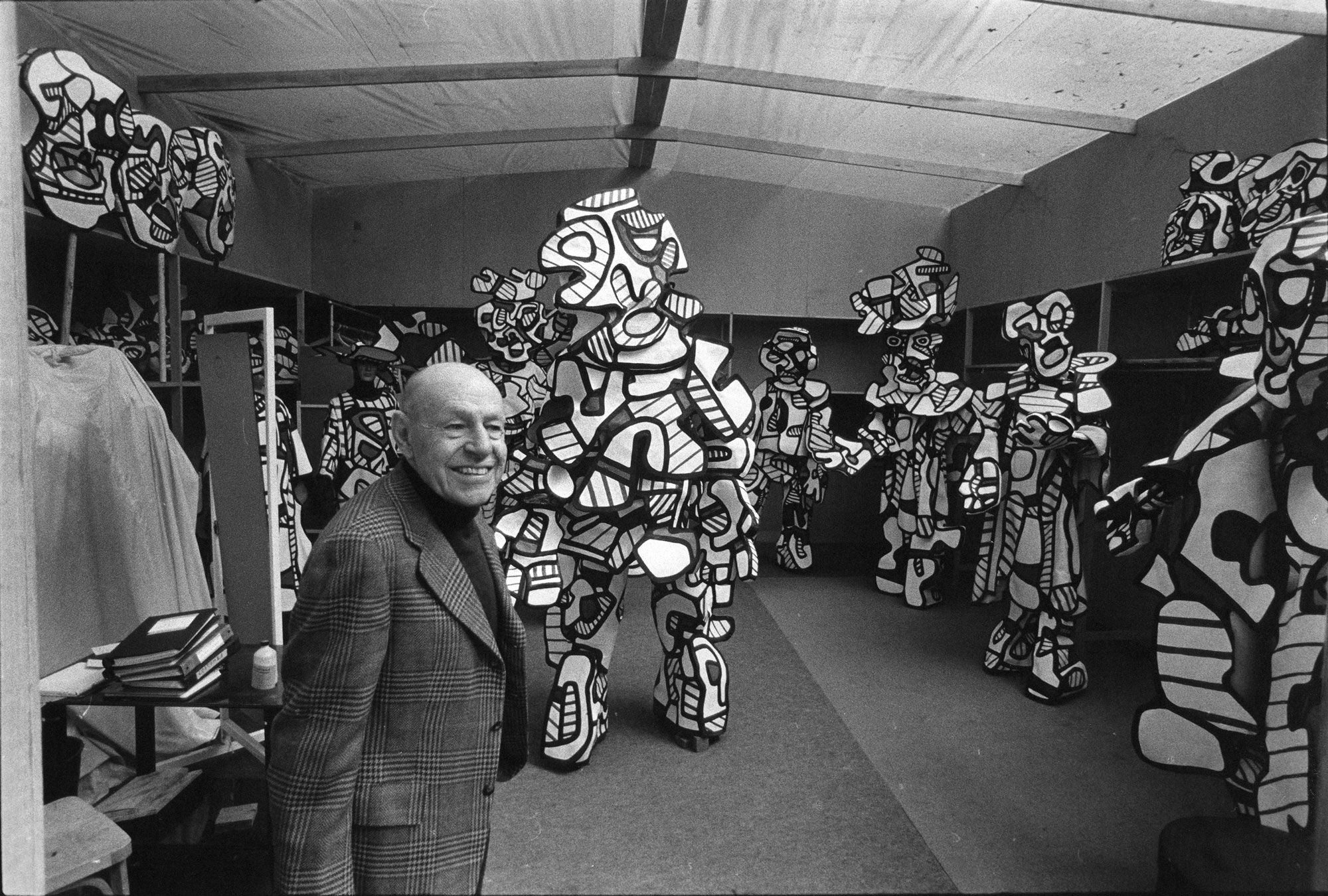 Art history nerds will be in their element this week as museums across England can finally throw open their doors after six long months of lockdown. But for those who haven’t yet committed their diaries (and wallets) to a marathon of museum exhibitions on 4-6 June, consider a tour of these smaller, but perfectly formed, free commercial shows at London Gallery Weekend. From a Jean Dubuffet street spectacle to a capsule survey of Italy’s effervescent post-war art scene, to a literally magnetic ensemble of Takis sculptures, here is our pick of six events not to miss. 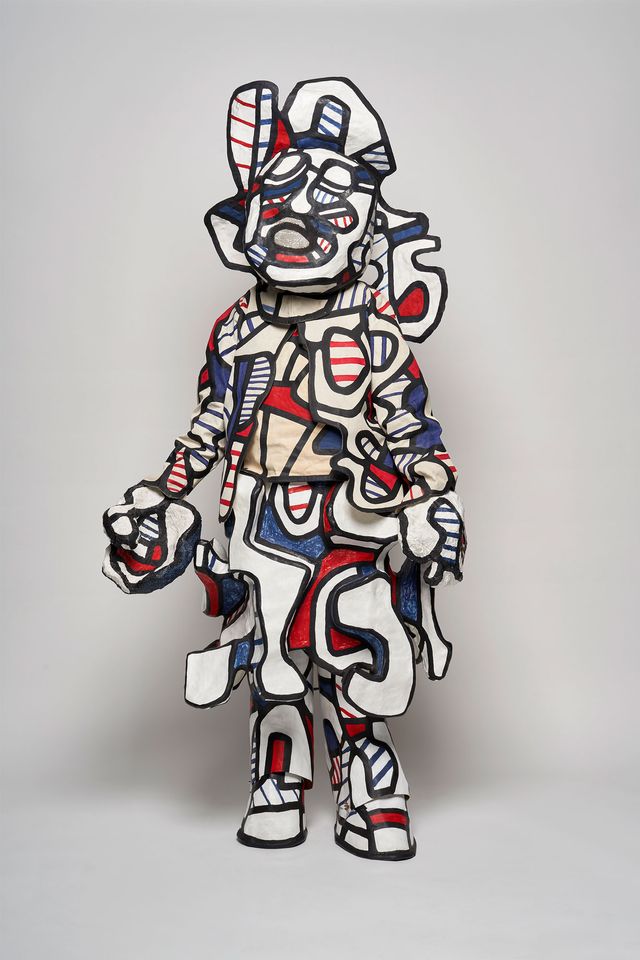 In a nod to the first major Jean Dubuffet exhibition in the UK since 1966 (across town at the Barbican), Pace London is staging a rare revival of the artist’s “living painting” performance, Coucou Bazar. This 3D extension of Dubuffet’s Hourloupe series—a fantastical 12-year opus born from an idle pen doodle—first appeared at New York’s Guggenheim Museum in 1973. For one day only, Pace will activate two historic costumes on special loan from the Jean Dubuffet Foundation in Paris. The three performances will take place outside the gallery’s shared Burlington Gardens entrance with the Royal Academy of Arts. And in the convention-busting spirit of Dubuffet, no time-slot tickets are required. Intent on collapsing the boundaries between art and life, he claimed: “It’s the person in the street that I’m after… they are the one I want to please and enchant.” Art Brut buffs and stray Oxford Street shoppers alike are welcome to drop in. 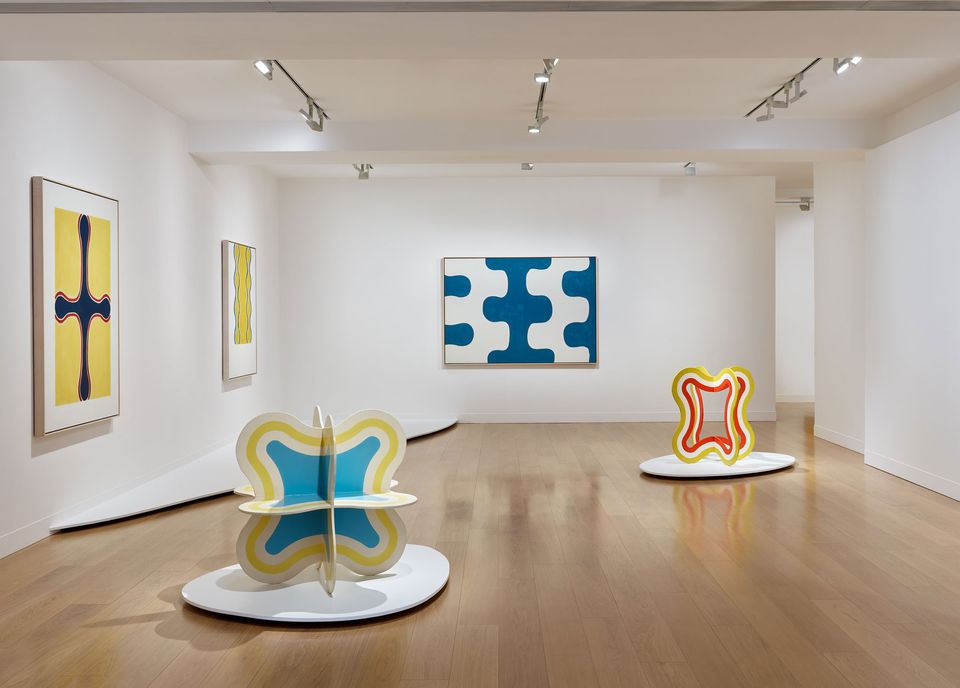 London Gallery Weekend will be the last chance to see the vibrant, sinuous paintings and sculptures of the American post-war artist Paul Feeley at Waddington Custot. Though his work is well represented in US museum collections, this is Feeley’s first solo show across the pond in over 50 years. Having broken with Abstract Expressionism in the 1940s, he found his peers among Colour Field painters such as Helen Frankenthaler, his student and friend, and Morris Louis, Kenneth Noland and Jules Olitski, whose work he also curated in exhibitions. In contrast with the angst of a Rothko or a Pollock, Feeley’s cheerful colour combinations and curving biomorphic motifs suggest an artist at play, revelling in shifting optical relationships between figure and ground as well as arcane titles—several inspired by Roman generals. The more polished interlocking wooden sculptures attest to his bold new direction in 1965, just one year before his life was tragically cut short by leukaemia. The Italian super-curator Francesco Bonami has brought together this group show exploring Italy’s overlooked role as an international, experimental art hub in the 1950s and 60s. The eclectic selection is a who’s who of Modern masters, with works by Francis Bacon, Yves Klein, Robert Rauschenberg and Cy Twombly alongside Italian greats such as Lucio Fontana, Alberto Burri and Pino Pascali. What connected them was a generation of risk-taking art dealers and collectors in Milan, Turin and Rome—a community obscured by the well-worn narrative of America’s artistic ascendancy after the Second World War. Unexpected affinities emerge, for instance between the live animals at the heart of Richard Serra’s radical debut exhibition in Rome—represented through enlarged photo panels—and the mythical creatures evoked by Pascali’s playful sculptures. The Italian-American connection is brought up to date with another visual surprise: art prankster Maurizio Cattelan’s darkly funny new work You, a besuited, smiling self-portrait sculpture that hangs by a noose from the flagpole outside. 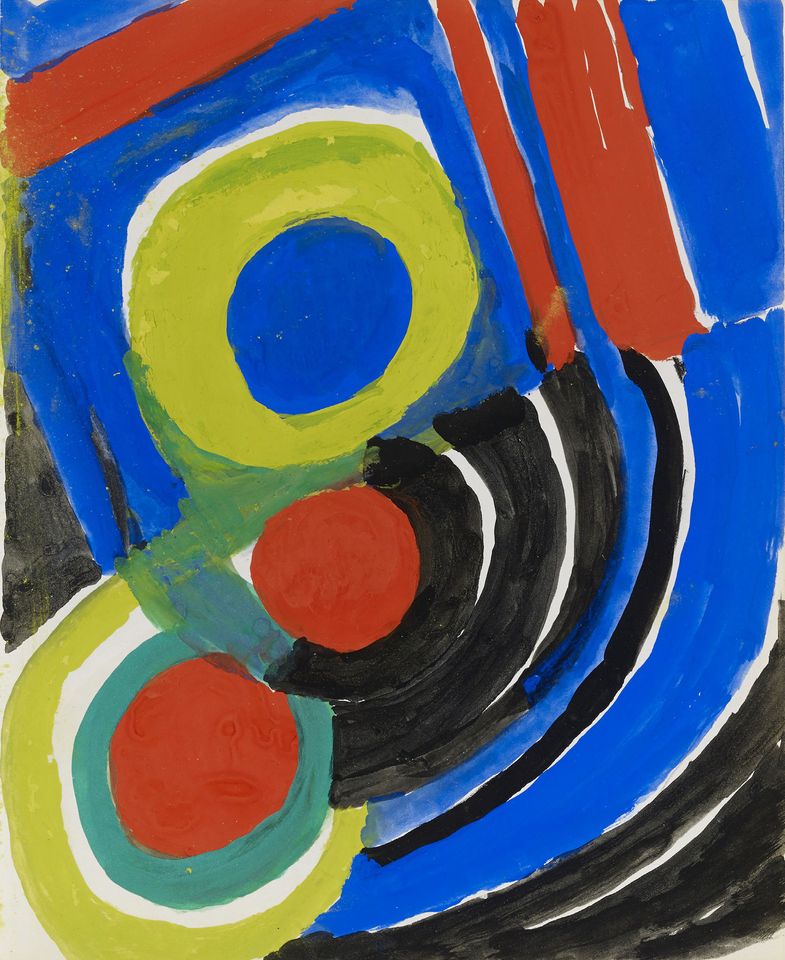 Sonia Delaunay for too long played second fiddle to her husband and partner in avant-garde abstraction, Robert (they married in 1910 and she later wrote: “I never put myself first until the 1950s”). Her shapeshifting creative talents—in painting, fashion and numerous design collaborations with poets and theatre-makers—have thankfully now been celebrated in major solo retrospectives such as Tate Modern’s in 2015. Bastian’s show of 14 compositions on paper focuses on the late series of gouaches, Rythmes-Couleurs, first published by her friend and collaborator Jacques Damase as a limited-edition book in 1966. The patchwork arrangements of geometric shapes in energetic shades of brick red, lime green or royal blue reflect the driving force behind all of Delaunay’s artistic endeavours: dynamism through brilliant colour. Several pieces have been passed down from Damase’s collection of gifts from the artist. 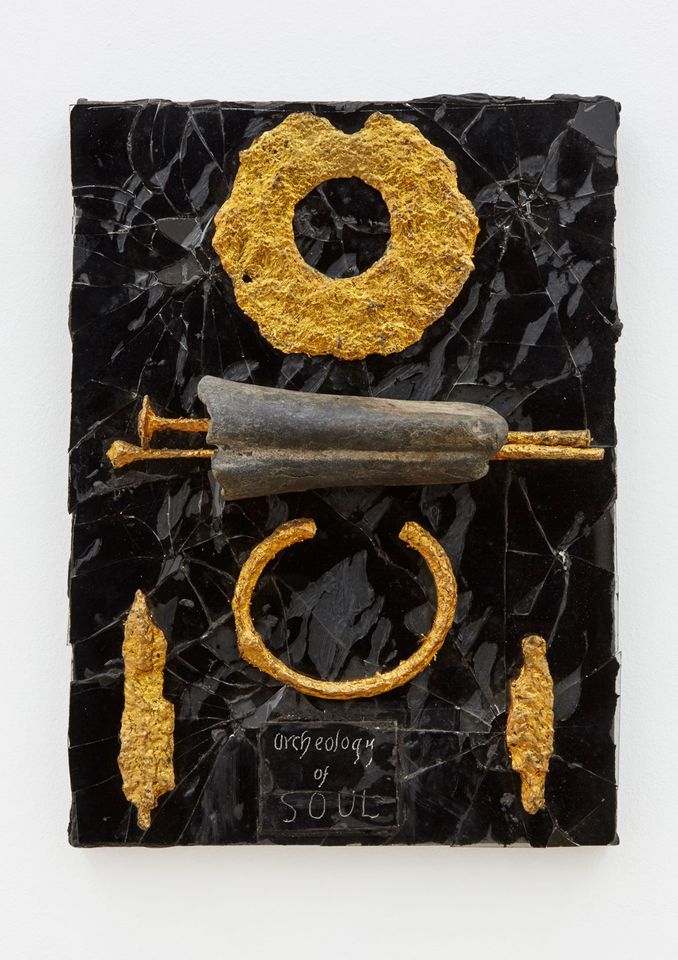 Derek Jarman: When Yellow Wishes to Ingratiate It Becomes Gold

Derek Jarman is best known as the arthouse filmmaker of punk satire Jubilee (1977), biopic Caravaggio (1986) and memento mori Blue (1993), made the year before his untimely death from Aids-related illness. But his painting practice is gaining recognition with recent exhibitions at the Irish Museum of Modern Art and the Garden Museum. Gallerist Amanda Wilkinson has worked with Jarman’s estate since 2013. Her latest show of 24 paintings, titled after a chapter of his lyrical book on colour, Chroma, includes a number of canvases that contrast glowing gold-leaf with black tar. Wilkinson describes them as “a kind of archaeology” of Jarman’s life from 1982 to 1992, a period when he was diagnosed with HIV and became a vocal gay-rights activist, met his partner Keith Collins and created a renowned garden at Prospect Cottage in Dungeness. Some paintings are embedded with broken glass, beach flotsam and condoms, while others are inscribed with defiant messages of political protest against the Conservative Thatcher government. 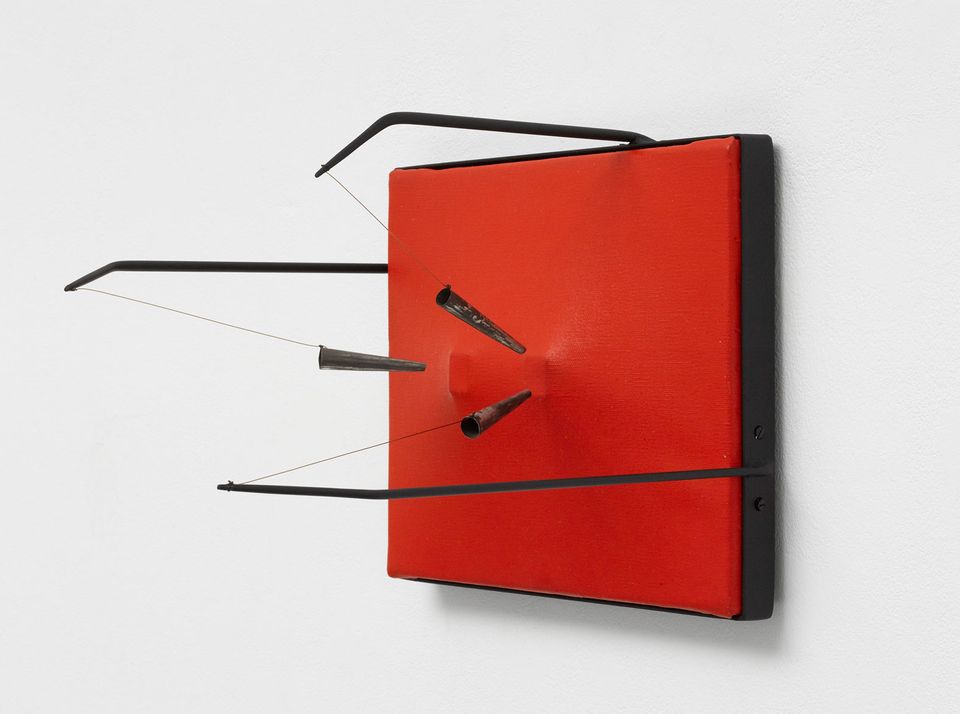 The cavernous industrial spaces of White Cube Bermondsey offer a fitting laboratory-like setting for the cerebral, scientific sculptures of the Greek artist Takis (Panayiotis Vassilakis). The first European show of his work since his death in 2019 is organised in collaboration with the Takis Foundation and encompasses the artist’s major series from the 1950s to the 2000s, including key works from his own private collection. From a wrecking-ball sphere swaying impossibly gently above its plinth to conical metal “bullets” angled in permanent suspension towards taut canvas, Takis’s gravity-defying creations are a masterclass in tension, reminiscent of an elegant physics experiment. Many of the pieces displayed here harness and reveal the invisible forces of electromagnetic energy, which he considered akin to the power of art. Hidden magnets and electronic circuits also govern the eerily kinetic Musical sculptures, whose discordant sounds reverberate around the gallery. For Takis, their raw scraping channelled the “music of the cosmos”.