In Miami for Art Basel? Eight shows to see outside the fair 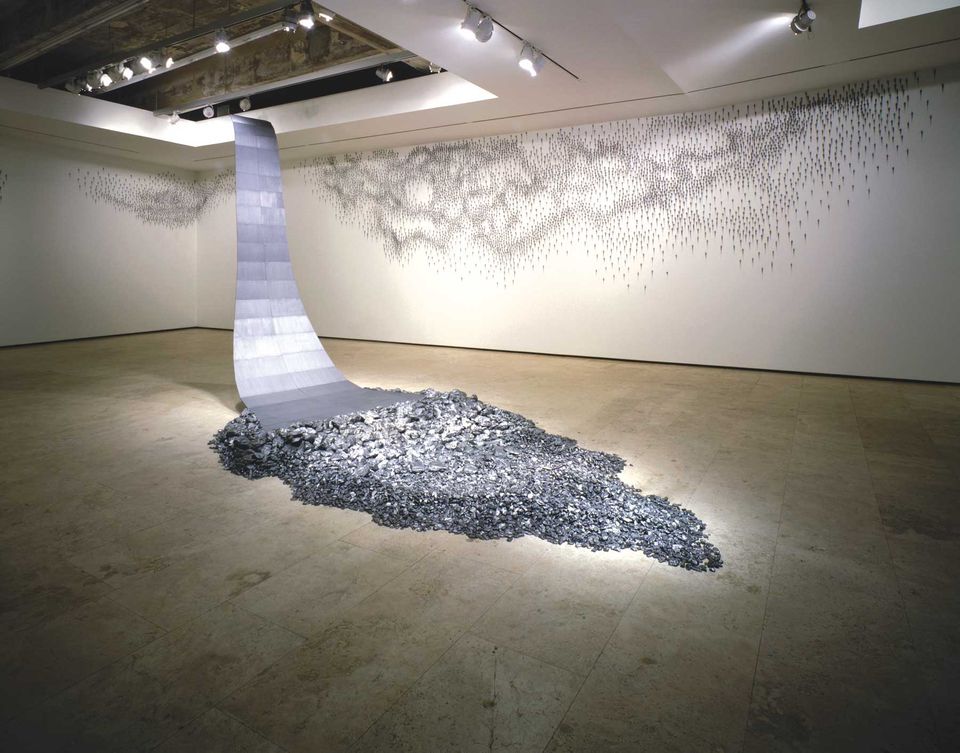 It’s fitting that the Miami-born artist Teresita Fernández’s first mid-career survey is in her hometown. “It’s really important because so much of my work is about place, and about unravelling one’s relationship to place,” she says. The exhibition includes more than 50 sculptures, installations, drawings and wall pieces made by the artist, a winner of a MacArthur Foundation “genius” award, over the past 20 years. It gave Fernández the opportunity to revisit some of her earlier pieces such as Borrowed Landscape (1988), which she created during her residency at San Antonio’s ArtPace. Fernández was surprised to see how much of it felt “fresh and connected” to her recent work, exhibiting “a laser focus on specific themes” that are still important to her, such as light vs dark and interior vs exterior. For the show she has created new immersive installations out of individual works that have been grouped both thematically and chronologically. “They’ve never been seen in that way,” she says. 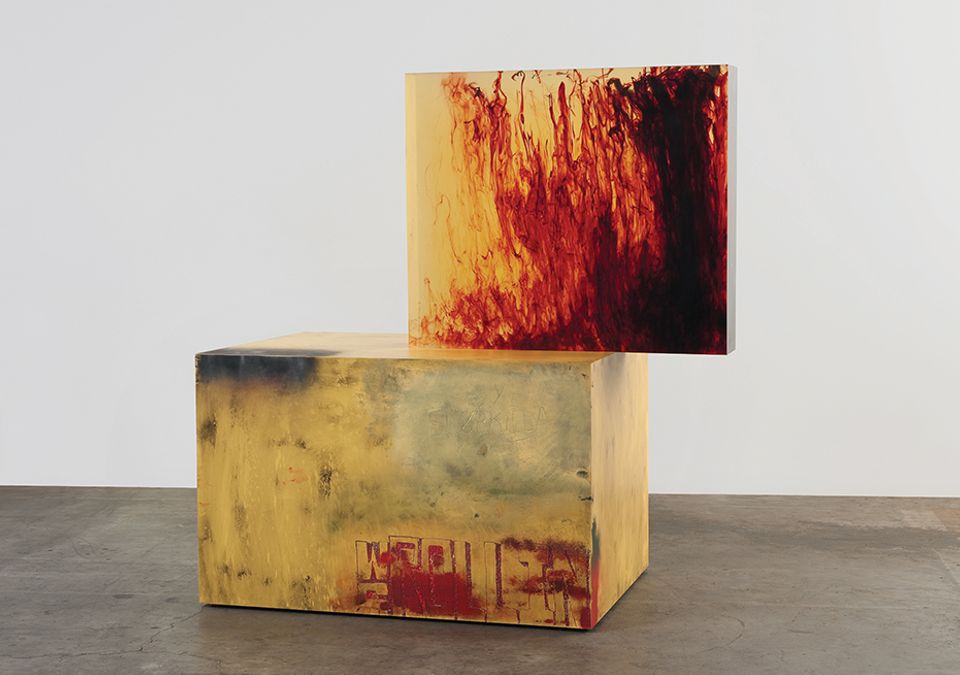 With more than 100 works spanning two decades, Sterling Ruby’s first solo museum show at the Institute of Contemporary Art (ICA) Miami “is an opportunity to dive deeper into his work and its key themes”, says Alex Gartenfeld, the show’s co-curator and the museum’s artistic director. As an artist, Ruby is hard to pin down, but if he is known for one thing, it is his multifaceted approach to art. In 2019, the Los Angeles-based artist launched a clothing line and presented a new series of dinosaur skull sculptures—a string of hyper-real skeletal monsters with exuberant yarn for hair. The ICA show features a fittingly wide range of materials, from Ruby’s monumental ceramic-and steel-sculptures to small works on paper and photographs. Gartenfeld notes that, with all of the work seen together, it becomes apparent that the idea of collage—or what Ruby refers to as “illicit merger”—becomes the connective tissue. “I hope that for audiences it will be refreshing to revisit some of Sterling’s earliest works, including drawings and transitional sculptures, and the ways that these interests have mapped themselves onto subsequent bodies of work,” Gartenfeld says. “It will also be a great reminder for viewers who are familiar with his monumental pieces to revisit how the themes in them emerged, and to rediscover how topical and fraught and intense Sterling’s work can be.” 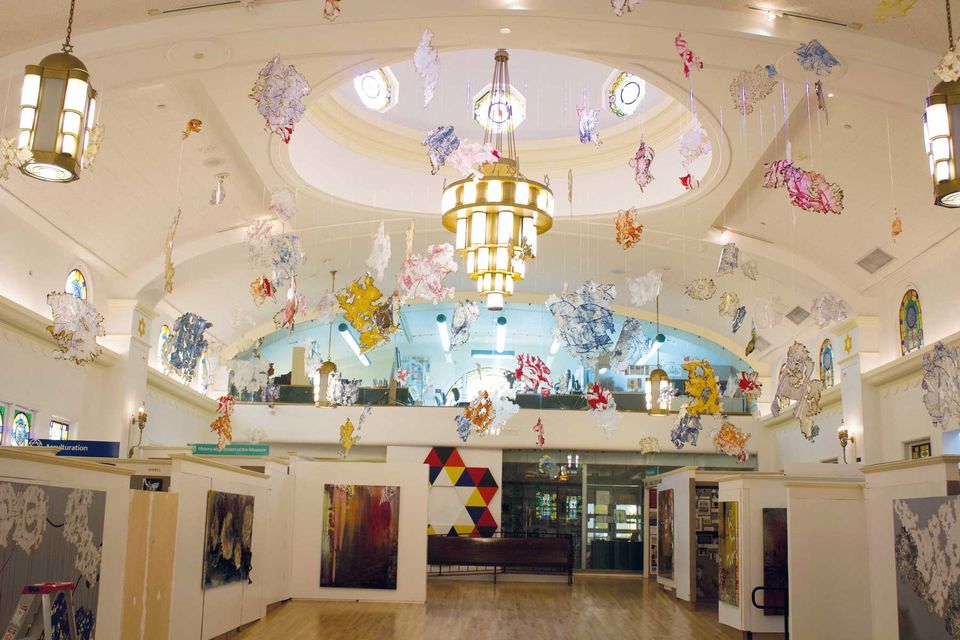 Mira Lehr: a Walk in the Garden, Jewish Museum of Florida-Florida International University, until 15 February 2020

The local artist and self-described “eco-feminist” Mira Lehr brings a bit of the outdoors indoors in her immersive exhibition at the Jewish Museum of Florida-FIU. Suspended from the ceiling of the former synagogue are 180 coloured resin sculptures that reference seven species of plant mentioned in the Torah. It was the 85-year-old artist’s first ceiling commission and she relished the challenge: “The museum has these gorgeous stained-glass windows and the way the sunlight comes in through them and plays off the sculptures is breathtaking,” Lehr says. “It’s almost as if the ceiling is dancing. I’ve watched people become mesmerised as the pieces move in the air currents.” Accompanying the ceiling sculptures is a display of ten new paintings created using one of the artist’s favourite materials: gunpowder. 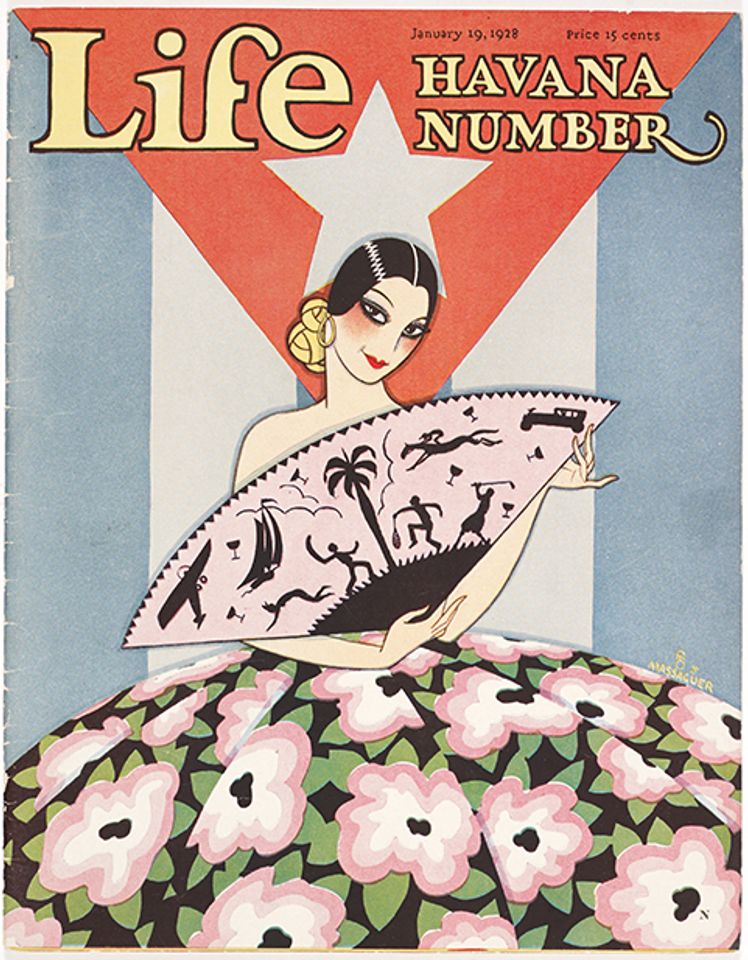 Cuban Caricature and Culture: the Art of Massaguer, The Wolfsonian–Florida International University, until 1 March 2020

The Wolfsonian is celebrating the work and wit of the Cuban caricaturist and publisher Conrado Walter Massaguer (1889-1965) in an exhibition that brings together more than 100 magazine covers, caricatures, adverts, paintings, sketches and letters produced during the illustrator’s 40-year-career. Through the lifestyle magazines Social and Carteles, which he published from the 1920s to the 1960s, Massaguer helped shape 20th-century Cuban culture by introducing Modernist aesthetics and ideas to his country. He also kept his audiences up to date on the latest news through his astute caricatures of leading political figures and celebrities. “Caricature was especially important in Massaguer’s time,” says Frank Luca, the Wolfsonian’s chief librarian and organiser of the show, which is largely drawn from pieces donated by the collector and historian Vicki Gold Levi. Among the highlights is Double Nine: Allied Teamwork Wins the Game, on loan from the Franklin D Roosevelt Presidential Library and Museum. The 1940s drawing depicts Roosevelt and Churchill beating a somewhat confused Mussolini and a petulant Hitler at a rousing game of dominoes as Stalin and Hirohito look on. Also on display is a digitised version of a rare book of caricatures of Fidel Castro and his revolutionaries that Massaguer published shortly after the fall of Cuban president Fulgencio Batista in 1959. Ironically, the drawings depict Castro and his comrades consuming American staples such as Coca-Cola and Jello—products that would soon become proibido when relations with the US soured. 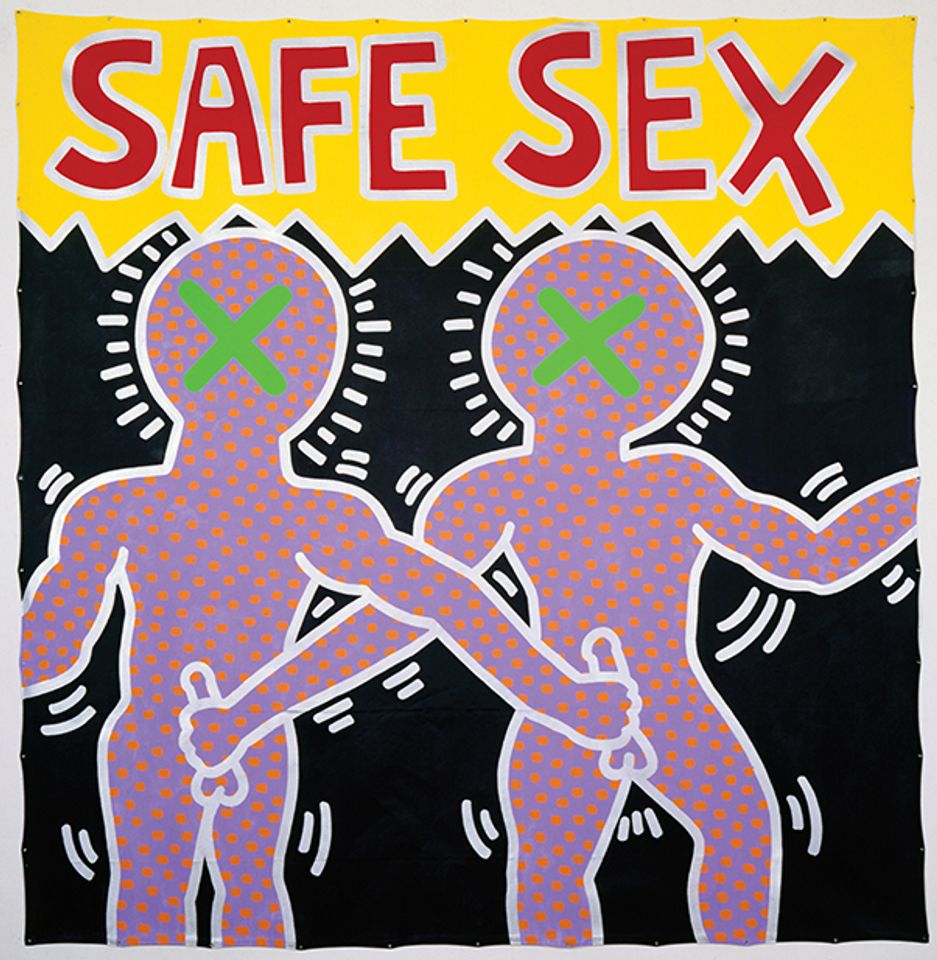 Safe Sex was created by Keith Haring in 1985, at the height of the Aids crisis; the artist, who began his career as a street artist in New York with drawings on the city’s subway, himself died in 1990 of an Aids-related illness © Keith Haring Foundation

The travelling survey Art After Stonewall, 1969-89, now at the Patricia & Phillip Frost Art Museum at Florida International University (until 5 January) is a sweeping commemoration of the landmark June 1969 event at the Stonewall Inn in Manhattan’s Greenwich Village. A turning point for LGBTQ+ history, the show includes more than 200 works covering topics such as gender, body, Aids and activism in various media from sculptures to books to Charles Ludlam’s puppets. Among the pieces are many portraits, from black-and-white photographs such as Joan E. Biren’s 1980 snapshot of the poet Audre Lorde, to David Hockney’s colourful 1979 acrylic-on-canvas depiction of the actor and drag queen Divine. Make sure to spend a full four minutes with the joyous landmark lesbian film Dyketactics (1974) by Barbara Hammer, who died shortly before the survey opened. 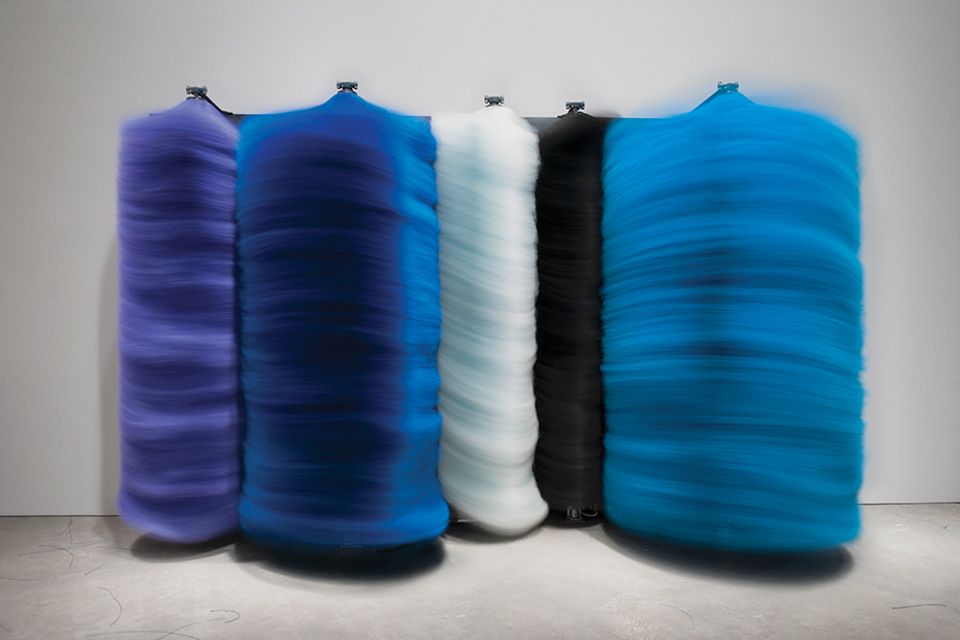 Among the works on view in Lara Favaretto’s solo exhibition at The Bass is the large bookshelf installation, Momentary Monument—The Library (2012-19). The hands-on display invites visitors to leaf through more than 2,000 books rescued from the Miami dump by the Italian artist who has inserted images from her personal archive into the pages. The show also includes other salvaged objects such as construction materials and found paintings, wrapped with wool. But perhaps the most eye-catching piece is The Bass’s latest acquisition, Gummo VI (2019). The newly commissioned installation features five colourful motorised carwash brushes that shake like wet dogs with their bristles slapping endlessly against an iron wall plate. If this does not quite cleanse you, a small silver plaque entitled Your Money Here (2008), offers a cheeky commentary on philanthropy in the art world. The piece consists of a single coin slot that accepts cash into a mysterious reserve in the museum wall.

Also at The Bass is Mickalene Thomas’s 1970’s-inspired new installation, Better Nights (until 27 September 2020). The display situates the artist’s exuberant collage work within a domestic space replete with wood panelling, wallpaper and upholstery. The living room set-up, which includes a bar, will host musical performances and DJ sets during Miami Art Week.

Kehinde Wiley, Sleep (2008) is one of the more than 1,000 artists in the collection the Rubells have amassed over 50 years © Kehinde Wiley

Inaugural installation, Rubell Museum, until 31 May 2020

The Miami collectors Don and Mera Rubell open the doors to their new 100,000 sq. ft space in Allapattah this week with an exhibition drawn from their 7,200-strong collection of contemporary art. The opening show, which Mera Rubell likens to “walking through more than five decades of the most exciting art in the world”, features 300 works by 100 artists including those the Rubells championed early in their careers such as Cindy Sherman, Richard Prince, Jeff Koons and Rosemarie Trockel. More than double the size of their former space in Wynwood, the new building boasts more than 40 gallery spaces that branch off from a single spine, allowing room for more solo presentations and the long-term display of works from the permanent collection. The display includes rooms dedicated to German artists, including Isa Genzken, Neo Rauch and Anselm Kiefer, areas reserved for Los Angeles stalwarts such as John Baldessari, Barbara Kruger and Catherine Opie and spaces for Yayoi Kusama’s installations Where the Lights in My Heart Go (2016), and Infinity Mirrored Room—Let’s Survive Forever (2017). 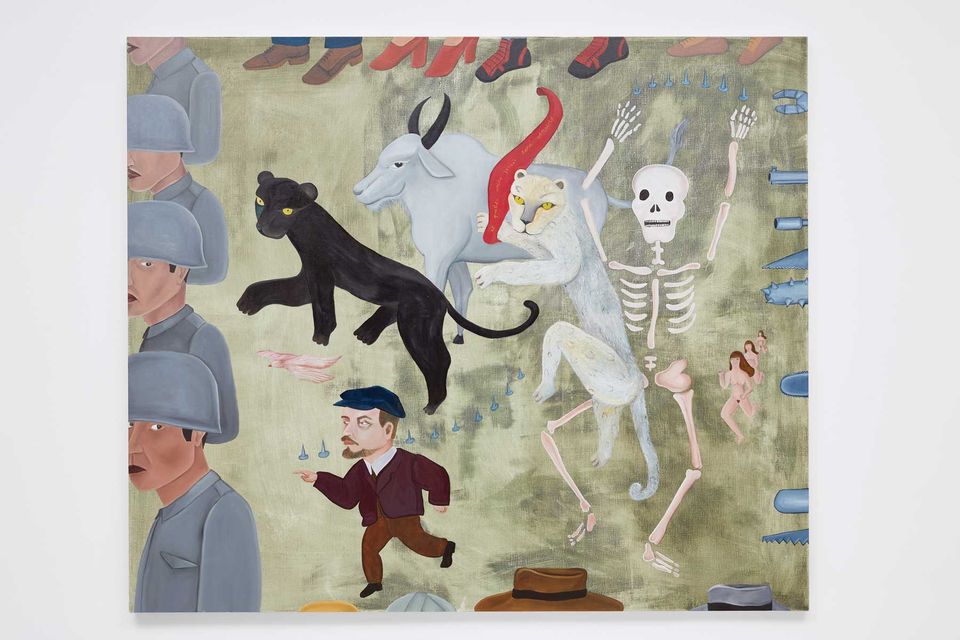 Cecilia Vicuña, El Paro / The Strike (2018) after the lost original 1977 Courtesy of the artist and Lehmann Maupin, New York, Hong Kong, and Seoul

Cecilia Vicuña: About to Happen, Museum of Contemporary Art, North Miami, until 29 March 2020

“What’s important about this survey is that it equally considers the connectivity between my art and poetry,” says the Chilean-born, New York-based artist Cecilia Vicuña about her first major museum retrospective, now at the Museum of Contemporary Art, North Miami. Vicuña says the show’s organisers, Andrea Andersson of the Contemporary Arts Center New Orleans and Julia Bryan-Wilson, the professor of modern and contemporary art at the University of California Berkeley, “read my work from a new perspective and sought to present it as an ecological, feminist and participatory practice”. Despite creating insightful conceptual works that reference ancient traditions and address political, environmental and gender disparities over a 40-year career, Vicuña has only recently seen her art gain international attention, with works she created in the 1970s and 80s acquired for the collections of the Tate in London and the Museum of Modern Art in New York within the past five years. This retrospective brings together drawings, videos, text, site-specific installations—such as the artist’s “quipus”, or sculptural hangings made from dyed wool that reference an ancient Andean tradition of record-keeping using knotted string—and an expansive presentation of her “precario” (precarious) objects, ephemeral works she began creating in the 1970s as ritual offerings to the sea. It also includes a series of paintings, a practice that the artist abandoned in the 1970s but has returned to in the last decade.

about 10 hours ago
Must-see institutional shows during Art Basel