Silk Pavilion (2013), an early work by Neri Oxman in which she used silkworms as collaborating creators and, inset, the worms at work © The Mediated Matter Group

An army of 17,000 silkworms have been busily at work in Padua, Italy, creating Silk Pavilion II, a towering hyperboloid—a shape that resembles a cylinder with a cinched waist—that is to be the centrepiece of a Museum of Modern Art (MoMA) show dedicated to the Israeli-born architect and designer, Neri Oxman.

The project is the kind of “collaboration or partnership”, says the exhibition’s curator Paola Antonelli, that is at the core of Oxman’s self-coined design practice of “Material Ecology”. This practice “was always about putting together the natural, the human and the robotic,” Antonelli says. “It was about computation, the inputs of the human being as the architect, and then natural phenomenon. What’s changed today is the balance” of those three actors, the curator explaines.

Oxman is an associate professor at the Massachusetts Institute of Technology (MIT) where she founded The Mediated Matter Group, a nature-inspired design research group with whom she collaborates. In the first iteration of Silk Pavilion made at MIT, Oxman used a robot to create a scaffold of string in the shape of a Buckminster Fuller-style dome that the silkworms used to guide their own weaving. The scaffolding for the new pavilion is made from a water-soluble fabric. “It’s so beautiful, because you put the silkworms on it and after they eat all their mulberry for about a week, when they’re ready to spin, they just poop and pee with abandon,” Antonelli says. “And because it’s a water- soluble fabric, they make holes. And then they get really focused on filling those holes. It’s really fantastic.” 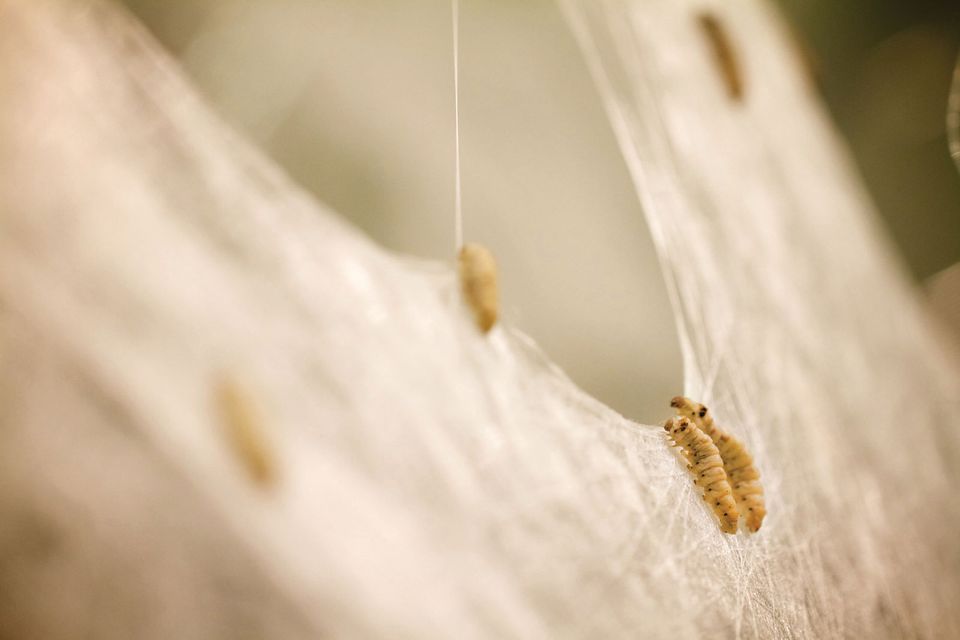 Initially, the idea was to have the silkworms do their spinning on site in MoMA’s galleries, but the museum could not source or import the required number, so it turned to one of Europe’s largest silk producing cities, Padua. Some live silkworms will be on hand at the museum during educational workshops, however, so visitors can see Oxman’s collaborators.

A similar melding of human intention, technology and nature can be seen in Oxman’s Aguahoja series, which uses some of the most abundant materials on earth: pectin and cellulose from plants and chitosan from shellfish. These biocomposites are layered in various ratios to create “structural skins” that can be supple and opaque like leather, or brittle and transparent like coloured glass. They can also be “programmed” to absorb or repel water to varying degrees, allowing them to easily biodegrade at the end of an intended lifespan, for example.

Oxman says that by focusing on a “system of materials” to explore, whether it be fibre- or cellular-based, rather than on individual elements, it becomes easier to “hack” what can be done with them. “Our projects necessitate that we invent the technologies to create them,” Oxman says. “We take great joy in working with age-old materials and generating new ways by which to give them shape,” she says. For example, when making pieces for Aguahoja, the team “created a robotic system able to 3D-print biopolymers”; for another series, GLASS, they created the first known glass-printing technology.

The exhibition will feature eight major projects from Oxman’s career but rather than focus on finished products, the displays will be examples of the research and experimental stages behind each series, as well as videos documenting the production process.

Oxman’s work as an architect and designer has matured since Antonelli first worked with her in 2008, when she was part of the group show Design and the Elastic Mind at MoMA. Antonelli attributes the shift in Oxman’s focus to building with nature both to the availability of new resources and the environmental crisis. “Her practice is a powerful anticipation of a better possible future, and it is projected toward that future without apparent anxiety, patiently weaving connections between disciplines and between species, slowing down the pace of making by marrying the latest technologies with the most ancient and deliberate of tempos—those of silkworms, bees and microbes,” Antonelli writes of Oxman in the exhibition catalogue. “She engages change using change’s own momentum.”

Similarly, Oxman recognises the “transient qualities” of the work her team has produced over the years, adding that the way it will transform over time is often difficult to predict. “We’ve come to embrace this and accept that—as in nature—change is the only constant.”

The exhibition is supported by Allianz and The Modern Women’s Fund.

For no eyes only: Mark Bradford’s quarantine paintings push the bounds of virtual art viewing

For no eyes only: Mark Bradford’s quarantine paintings push the bounds of virtual art viewing