In the Met’s British galleries, a tale of artisans spurred by entrepreneurial forces The Metropolitan Museum of Art’s $22m reinstallation of its British galleries opens to the public on Monday with a stirring narrative on the anxious commercial striving that shaped the British decorative arts from 1500 to 1900.

Featuring nearly 700 works in 10 rooms spanning 11,000 sq. ft, the galleries tell a warts-and-all story of empire in which dark elements like the slave trade emerge and cataclysmic events like the Great Fire of London in 1666 serve as dramatic punctuation points. Nearly a third of the works on view have been newly acquired, with a preponderance of those recent purchases in the 19th-century section.

The Met’s British collection is the largest of its kind in the US. The opening, part of the Met’s 150th anniversary celebrations, crowns a seven-year effort that began with the notion that “these galleries needed some attention and refreshment,” says Wolf Burchard, the Met’s associate curator of British furniture and decorative arts. “The previous galleries were all about the individual objects in historic interiors, and there was no thread that went through it,” he explains. “The new galleries are all about the cross section between creativity and entrepreneurialism.”

The museum collaborated with the firm Roman and Williams Buildings and Interiors on the design of the galleries, which the curator describes as a series of dramatic stage sets concocted to generate surprises.

The first gallery, clad in paneling made for the merchant trader William Crowe, opens from the museum’s medieval sculpture hall, vaulting the viewer into the 16th-century Renaissance era. A wall text emphasises how the House of Tudor competed to match the artistic splendours of papal Rome, the French courts and the Germanic centres of Hapsburg power, and how a new class of professionals with luxury appetites arose under the stable reign of Elizabeth I amid an expansion of global trade. 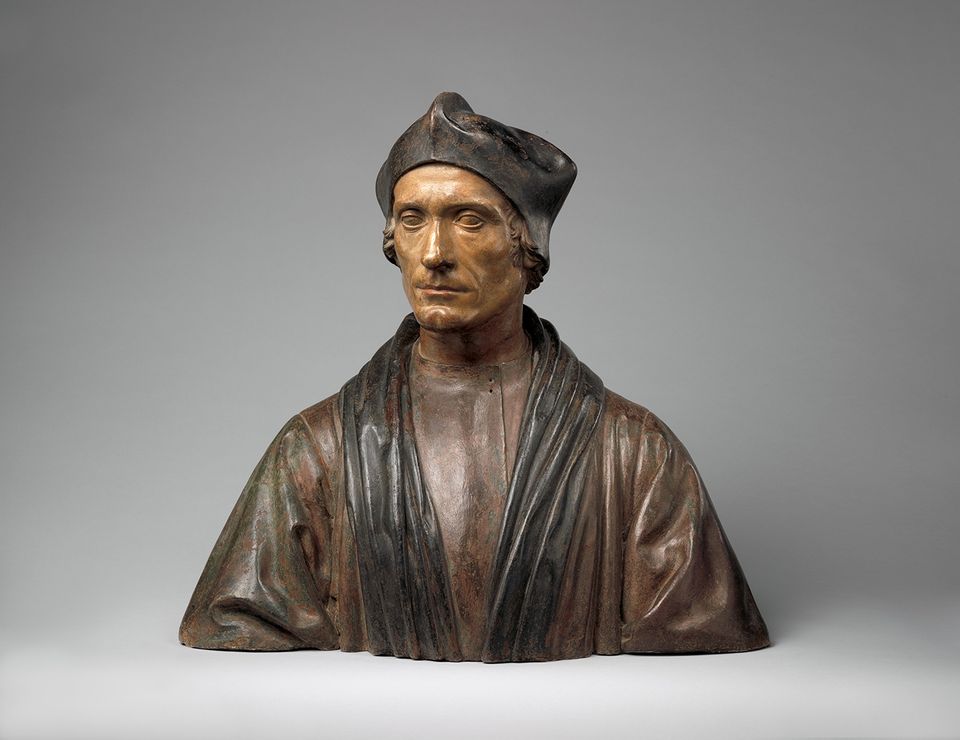 Surveying the gallery from its perch is a polychrome terra cotta bust that is thought to depict Bishop John Fisher, who was executed for opposing Henry VIII’s decision to lead the Church of England away from Roman Catholicism and papal authority. Leading to a mezzanine is another highlight, the magnificently ornamented and newly conserved pine and elm staircase from Cassiobury Park, Herfordshire (around 1677-80), with its naturalistic acanthus leaves, acorns, birds and snakes. A gallery titled “Tea, Trade and Empire” drives home how four commodities—tea, sugar, coffee, and cocoa—fuelled artistic innovation in Britain from the late 17th through the late 18th century. The museum has installed two towering semi-circular glass cases filled with a whimsical assortment of 100 teapots, underlining how that staple became a pivot point for social interaction in even modest British households and nurtured an enormous national ceramic industry. (The galleries are mindful not just of an aristocratic elite but of multiple layers of society.) At the same time, the 1789 title page of a slave’s memoir on the perimeter of the gallery alerts viewers to the exploitative nature of empire, with the trans-Atlantic slave trade rising in tandem with the spread of sugar plantations. “Much of the wealth of this period is built on the labor of enslaved Africans,” a wall text says simply. 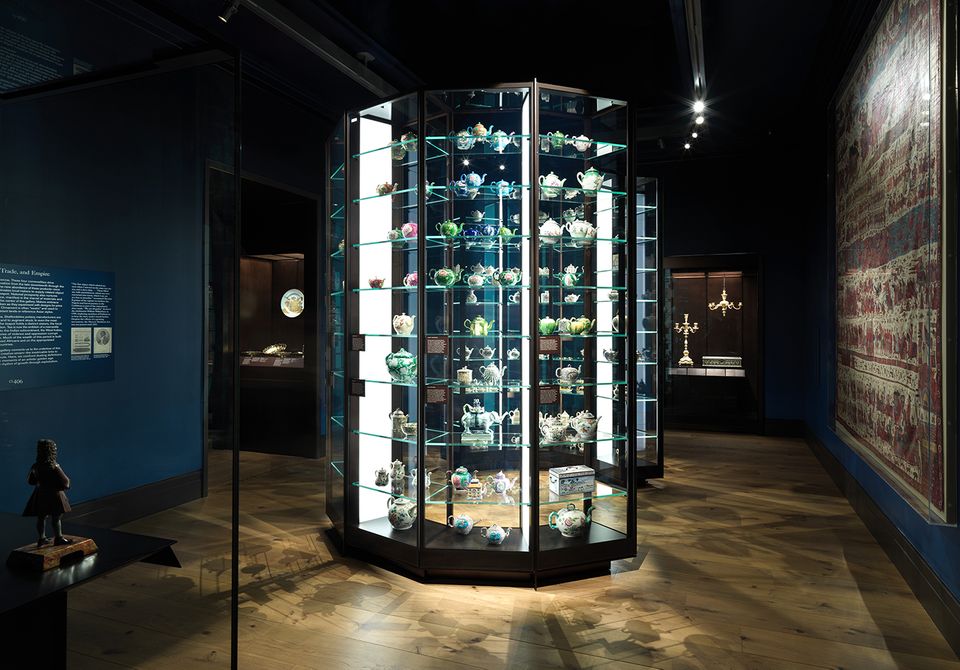 Three galleries are devoted to the re-creation of striking 18th-century British interiors moved from Kirtlington Park (Oxfordshire), Croome Court (Worcestershire) and Lansdowne House (London). A wall text notes that the Lansdowne dining room, designed by Robert Adam and crowned by an intricately decorated ceiling, banished odor-absorbing textiles that would have retained “the smell of the victuals”. 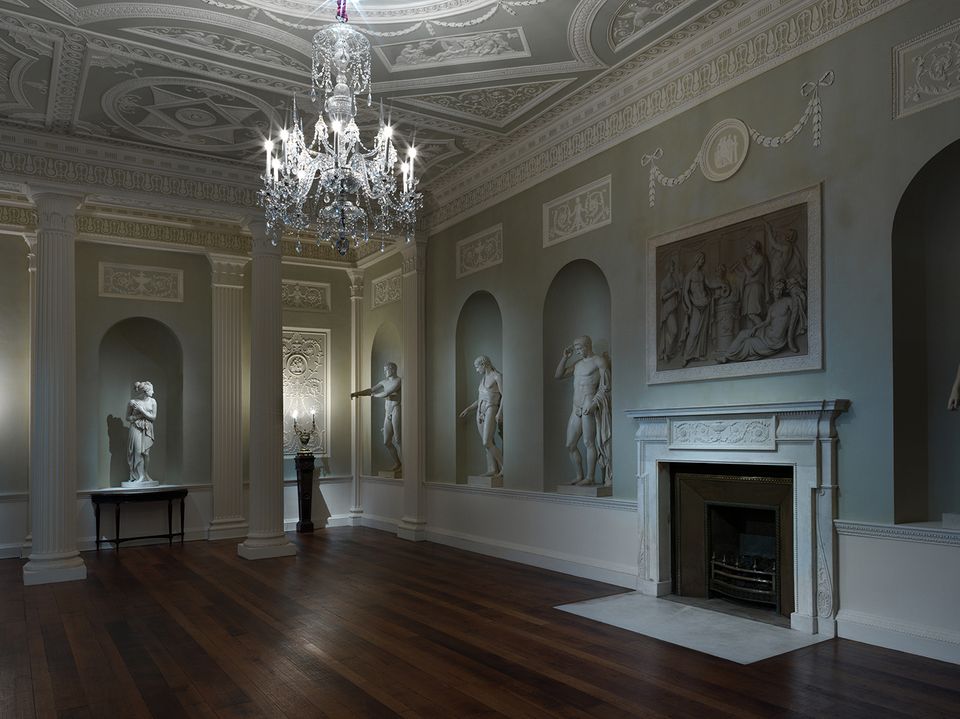 Burchard says his favourite display is the so-called “retail case” in an 18th century gallery featuring a constellation of tiny floating objects, from gold snuff boxes to enamelled candlesticks to miniature silver curios. “To me that is the absolute highlight of the galleries because it’s something that really summarises what these galleries are about—consumerism and commerce and creativity and boldness and design and craftsmen trying to market themselves,” he says. “It’s not just about aristocratic patronage.”

Finally, a 19th-century gallery depicts the British empire at its apex, with the drive toward commerce accelerating with the advent of the Industrial Revolution, when manufacturers churned out eclectic pieces inspired by the Far East, the Islamic world, the Renaissance, the Gothic and the Rococo. Among other artists, the gallery showcases the work of Christopher Dresser (1834-1904), whose deep knowledge of past styles and familiarity with modern manufacturing processes made him a design pioneer. 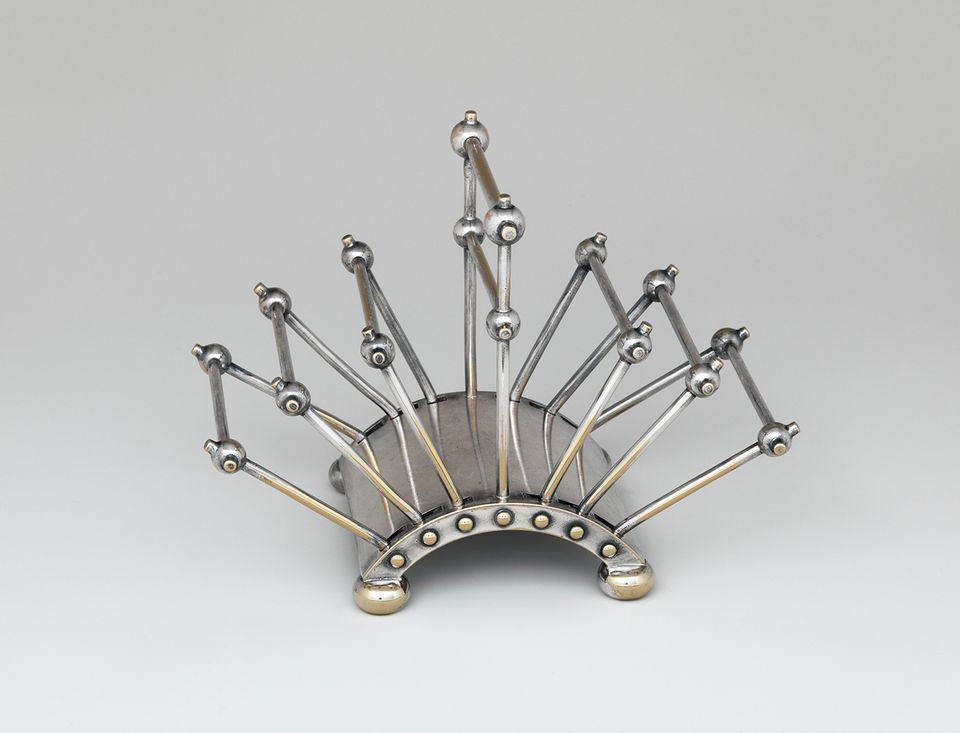 “He pushes the material in different ways depending on what the material is,” Burchard says, “and I think that’s really exciting. If you look at some of the toast racks or other silver objects that he produced, you wouldn’t think that they were made in the 1870s but probably in the 1920s, if not the 1950s.” A textile designed by William Morris, a cabinet painted by Edward Burne-Jones and a bread plate by Augustus Welby Northmore Pugin reflect diverse philosophical interpretations of what good design is. (Ever mindful of the social and political context, a wall text notes that industrialisation sparked revolts against labour abuses and the demise of craft.)

It is not lost on the Met curators that the galleries are opening as the UK embarks on a reconfiguration of its role in Europe and on the world stage via Brexit. Burchard emphasises that Britain’s global ties are front and center throughout the exhibition.

“One of the main reasons why the Met can justify having galleries of this scale, dedicated solely to British art, is because it's such an international story,” he says. “Almost every single object that is on display, was either inspired by the arts from foreign lands, as it were, or have been made in a context, either a European context or a global context. And I think this is really, really important.”