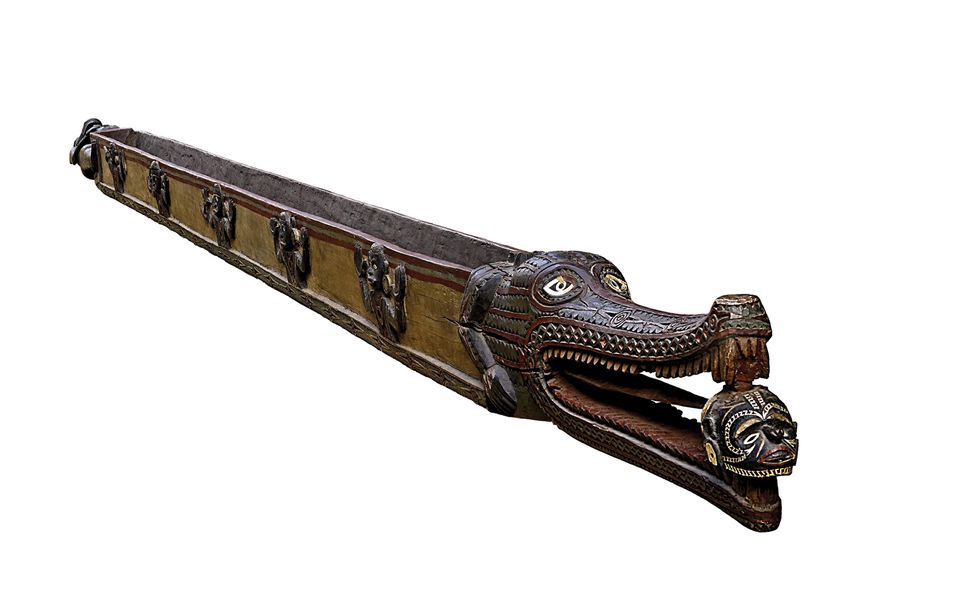 A looted 19th-century ceremonial feast trough Photo: © The Trustees of the British Museum

The Royal Academy of Arts in London is to present one of its ambitious world cultures exhibitions this week—on Oceania. With around 200 works, the show will be the largest Oceania exhibition since 1979, at Washington, DC’s National Gallery of Art. Loans of historical material will mainly be from UK and European museums. US museums were largely avoided, since their collections have less established provenances, but important loans are coming from museums in Auckland and Wellington.

The exhibition will inevitably raise sensitive questions about how the objects were acquired. The Academy therefore decided not to include works that were obtained “illegitimately”, but to only request pieces that had been given or bartered.

There is one exception: a huge feast trough, nearly seven metres long. Carved from wood in the 19th century, it is in the shape of a crocodile, with a human head in its jaws. It was looted by captain Edward Davis during an 1891 punitive raid on Roviana in the Solomon Islands. As part of his justification for seizing the trough, Davis claimed that “cooked captives were eaten from this bowl by the captors”. The Roviana chief, Ingava, denied this, saying that they “do not eat men from the trough”, although severed human heads had been displayed around it.

Astonishingly, the feast trough has never been exhibited at the British Museum since its acquisition in 1903. Nicholas Thomas, the co-curator of the show and director of Cambridge’s Museum of Archaeology and Anthropology, believes it is important to display it, despite its looted status, “to represent a history of confrontation and violence”.

Thomas also stresses that it will be an art exhibition, although informed by ethnography. The presentation will be thematic, rather than geographic.

The exhibition is due to travel to the Musée du Quai Branly-Jacques Chirac in Paris next year. The main sponsor of the show is the New Zealand government.