Send in the clowns: Ugo Rondinone at the Bass 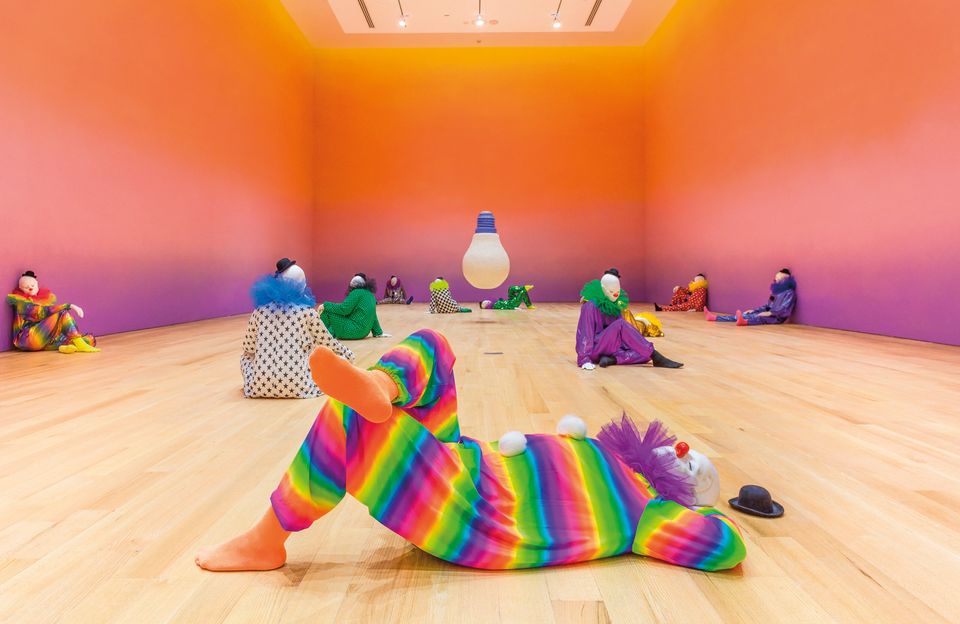 Vocabulary of Solitude (2014-16) Courtesy of the artist and the Bass, Miami Beach, photograph by Zachary Balber

Visitors to last year’s edition of Art Basel in Miami Beach no doubt remember seeing Ugo Rondinone’s Miami Mountain, the Swiss artist’s permanent installation for the Bass. The piece, a 41ft totem made of neon limestone boulders, was installed in front of the museum in Collins Park. At the time, the Bass was closed for a $12m renovation to restore its Art Deco façade and add more than 4,000 sq. ft of exhibition space, as well as four new galleries.

The eye-catching work “was a great way to announce to the public that we would be open to everyone in Miami—museum people and non-museum people”, says Silvia Karman Cubiñá, the museum’s executive director and chief curator. A year on and the Swiss artist is back in Miami with his first US solo museum exhibition, Good Evening Beautiful Blue.

The show, which takes over the entire second- and third-floor galleries at the Bass, is the final stop of a major international retrospective that spans three decades of Rondinone’s career. It has previously travelled to the Contemporary Arts Center in Cincinnati and the Museum Boijmans Van Beuningen in Rotterdam, among other venues.

Good Evening Beautiful Blue follows the multi-part exhibition Ugo Rondinone: I ???? John Giorno, which launched this year at 13 different venues in New York, where the artist is based. That exhibition included works by Rondinone and the US poet and performance artist John Giorno, Rondinone’s muse and longtime partner, as well as works by other artists friendly with the couple.

The Bass show opens with the installation Clockwork for Oracles II (2008), comprising 52 mirrored windows—one for each week in the year—installed against pages from the Miami Herald, each showing the date the newspaper was printed. This particular work was chosen to start the show because it is meant to evoke “the main themes of the exhibition—meditation and time”, Cubiñá says.

Although Clockwork for Oracles II, on loan from the Almine Rech Gallery, has been shown in other museums, such as the Institute of Contemporary Art, Boston and the Art Gallery of New South Wales, Rondinone “modifies it in each location by using the local newspapers, so that we’re reflecting on ourselves and our presence, in contrast to the passing of time”, Cubiñá says.

The first gallery leads visitors to the centrepiece of the presentation, an installation called Vocabulary of Solitude (2014-16), with 45 life-sized clowns made from milled foam and epoxy resin, modelled from men and women of various ages and ethnicities. They fill an expansive room that gives visitors a “Turbine Hall-like experience”, Cubiñá says. The work alludes to Rondinone’s “reflection of his and other people’s actions—the clowns each have an expression on their face about the different things you do privately in your daily life, like sleeping, showering and thinking”.

This installation was shown in the four other institutions involved in the retrospective, but unique to Miami is the rainbow in the background, entitled Sunrise, Sunset V (2014).

The final gallery, which is flooded with blue light, shows a six-channel video installation from 1999-2000 with a whopping, 74-word title beginning It’s late and the wind carries a faint sound as it moves through the trees… It is on loan from the Museum of Modern Art in New York and, according to Cubiñá, shows “different individuals in introspective and private moments—like the clowns, these people are just looking, thinking and walking”.

Cubiñá hopes that visitors to the exhibition will come away feeling “that we achieved our main goals for the building, which was to create a comfortable and engaging experience”.