From the much-anticipated Grand Egyptian Museum to the Frick’s move to a Brutalist landmark, here are the building projects aiming to change cultural landscapes around the world 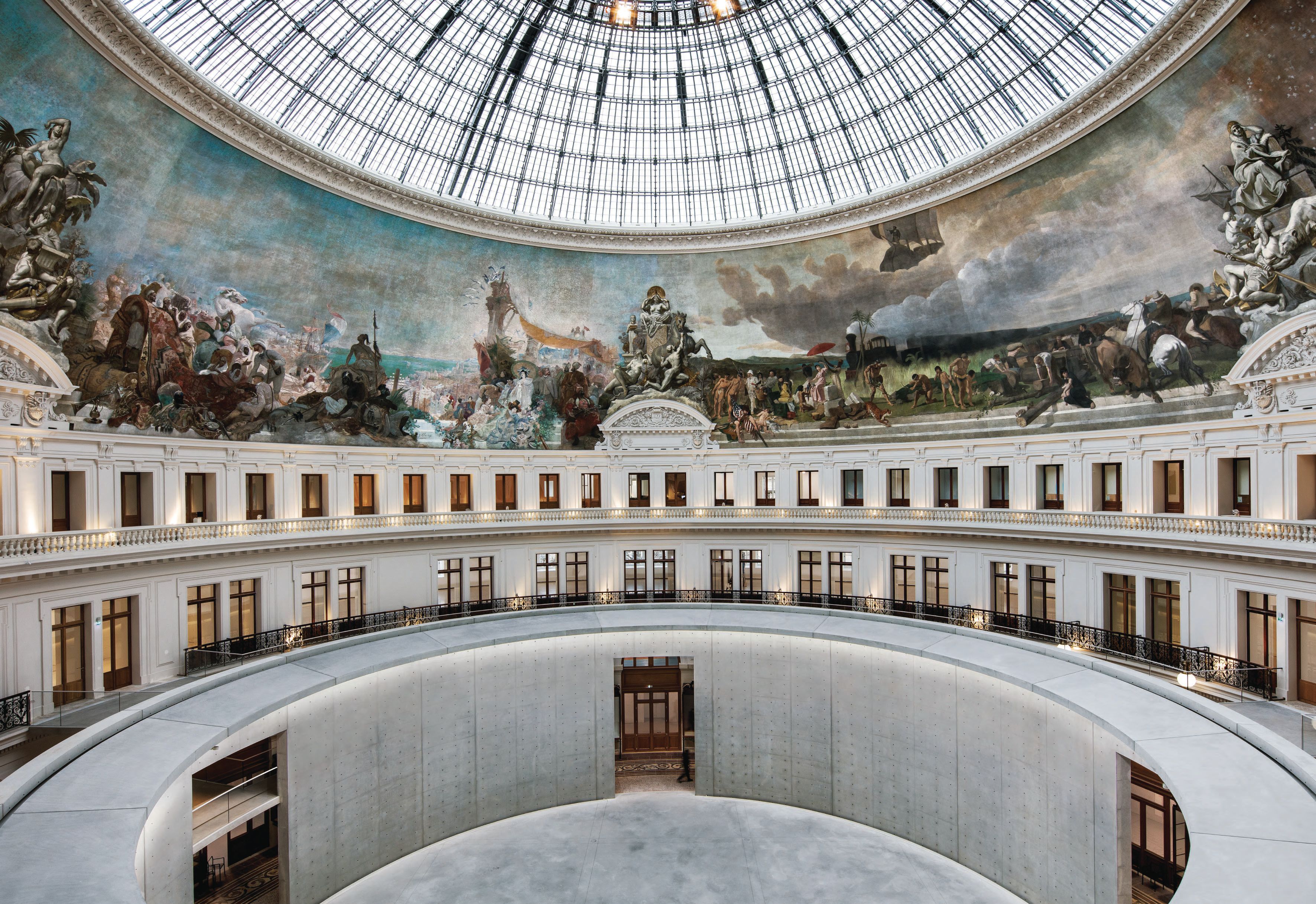 The glass cupola and panoramic mural at the heart of the Bourse de Commerce-Pinault Collection, which opens in a restored grain exchange © Photo: Patrick Tournboeuf

At 84, the billionaire François Pinault will finally realise a 20-year plan to build a private museum for his contemporary art collection in Paris. The Bourse de Commerce-Pinault Collection, housed in an 18th-century grain exchange, is poised to open just two blocks away from the Musée du Louvre. Architect Tadao Ando’s elegant restoration of the circular building was completed on schedule, yet the final phase of installation and the opening have been repeatedly delayed. Most recently, the scheduled inauguration on 23 January was postponed by an extension of French government restrictions on cultural venues. What impact has the health crisis had on Pinault’s plans? “It gave us time to think,” says Jean-Jacques Aillagon, the director general of the Pinault Collection. “Gauging the extent to which people have suffered and the world at large has been affected by this pandemic, Pinault decided that our opening exhibition had to be as serious as the situation in which we find ourselves.” The Frick Collection is relocating for two years to Marcel Breuer's 1966 Brutalist building, the former home of the Whitney Museum of American Art and the Met Breuer Courtesy of the Metropolitan Museum of Art

Frick Collection enthusiasts are bracing for an eye-opener when the museum moves to starkly different premises on Madison Avenue—the 1966 Brutalist building by Marcel Breuer that formerly housed the Whitney Museum of American Art and the Met Breuer. Transplanted from the domestic setting of its Gilded Age mansion at East 70th Street during the building’s two-year $160m renovation and expansion, the Frick will depart from its usual eccentric hang of Old Master works, opting for a chronological and regional progression over three floors. Its five Rembrandts will be shown side-by-side, as will its three Vermeers and canvases by Velázquez, Murillo, Goya and El Greco. Decorative objects that formerly surrounded the paintings will take pride of place in dedicated displays. Pandemic restrictions scuppered the December unveiling of Europe’s largest cultural development, the Humboldt Forum. A partial reconstruction of the Prussian royal palace, it was conceived in 2002 as a showcase for Berlin’s non-European museum collections. The 40,000 sq. m complex promises to unite the arts and sciences in the spirit of its 18th-century namesakes, brothers Alexander and Wilhelm von Humboldt, with exhibits overseen by four partner organisations. The 2021 programme includes special exhibitions on environmental and social change, Berlin’s global connections and ivory. On 22 September, more than 20,000 objects from Africa, Asia, Oceania and the Americas will go on show on the upper floors—no doubt fuelling an already live debate around Germany’s colonial history. The Grand Egyptian Museum's atrium was built around an 11m-high, 83-ton granite statue of Ramses the Great © Djehouty

In the making since 1992, the Grand Egyptian Museum outside Cairo will be the world’s biggest archaeological museum. Its sprawling 500,000 sq. m site near the pyramids of Giza will be home to 100,000 Egyptian artefacts ranging from pre-history to the Greco-Roman period. They include more than 5,000 relics from the tomb of Tutankhamun (2,000 of which have never been seen in public), newly excavated sarcophagi from the necropolis of Saqqara and monuments too large for the historic Egyptian Museum in Cairo. The soaring atrium was built around an 11m-high, 83-ton granite statue of Ramses the Great, which arrived in 2018 with a military escort. The grand opening is anticipated before the end of this year, according to Egypt’s minister of tourism and antiquities, Khaled al-Anany, but could be delayed by government authorities to 2022. First announced in 2008, the new home of the world’s largest Edvard Munch collection is planned to open on Oslo’s waterfront this autumn. Madrid’s Estudio Herreros has designed a 13-floor tower clad in perforated aluminium with a tilted top section overlooking the Oslo Fjord. Eleven galleries will lead visitors through Munch’s career, drawing on his 1944 bequest to the city of more than 26,000 works and 10,000 personal items, including two painted versions of The Scream. Exhibitions will place him in dialogue with other artists, starting with Tracey Emin, whose 9m-high kneeling bronze sculpture The Mother will greet visitors outside the museum. Camille Henrot will have a solo show as the winner of the first Edvard Munch Art Award in 2015. Hong Kong’s long-awaited contemporary visual culture museum is finally approaching completion in the West Kowloon Cultural District. Shaped like an upside-down letter T, Herzog & de Meuron’s 65,000 sq. m building will be devoted to 20th and 21st-century art, design, architecture and moving image from Hong Kong, mainland China and elsewhere in Asia. Poised to become one of the world’s biggest museums, M+ will have a towering LED façade to screen artworks, 17,000 sq. m of exhibition galleries, three cinemas, a learning hub and a roof garden with views of Victoria Harbour and the Hong Kong skyline. Its burgeoning collection of 8,000 objects and 47,000 archival items is anchored by 1,500 works of Chinese contemporary art donated by Uli Sigg.

• An expanded Dia Chelsea in New York will open in April with an exhibition of new work by the artist Lucy Raven. The $20m project merges three buildings and creates more space for street-level galleries and public programming.

• The Kunsthaus Zurich will become Switzerland’s biggest art museum thanks to a SFr205m ($230m) extension by David Chipperfield Architects. Opening for previews in April and in full in October, the new building doubles the museum’s footprint and provides a home for Impressionist and post-Impressionist masterworks from the Emil Bührle collection.

• The Philadelphia Museum of Art hopes to open more than 1,800 sq. m of new galleries for American, Modern and contemporary art on 7 May in the latest phase of its ambitious $233m renovation led by Frank Gehry.

• Gehry’s craggy stainless-steel tower is also due to open on 26 June as the centrepiece of Luma Arles, the Luma Foundation’s 17-acre campus in the southern French town. Inside will be exhibitions, archives, a library and a restaurant.

• UCCA Edge, the third location of Beijing’s UCCA Center for Contemporary Art, is scheduled to open in Shanghai on 22 May. The 5,000 sq. m centre will span three levels of a new mixed-use tower in the riverside area Suzhou Creek.

• 798 Cube Art Centre in Beijing is due to open with an initial five-year exhibition programme of works by Alberto Giacometti and Pablo Picasso, in partnership with the Fondation Giacometti and Musée National Picasso-Paris.

• The $388m Academy Museum of Motion Pictures in Los Angeles, designed by Renzo Piano, is due to open on 30 September. Dedicated to the art and science of film, the museum reconfigures a 1939 department store, connected to a new spherical building featuring a theatre and rooftop terrace.

• London’s Courtauld Gallery will reopen in November after a redevelopment of its Somerset House home, including new exhibition galleries and a learning centre for public programmes as well as improved conservation and study facilities for the Courtauld Institute of Art.

• The Jean Nouvel-designed Pudong Museum of Art is planned to open beside Shanghai’s landmark Oriental Pearl TV tower with an exhibition from the Tate collection. Under a 2019 partnership with the state-owned developer Shanghai Lujiazui Group, Tate will organise three Pudong exhibitions and advise on museum operations.

• Art Jameel is developing Hayy: Creative Hub, a 17,000 sq. m complex in Jeddah, Saudi Arabia, hosting 12 partner organisations as well an exhibition centre, theatre, artist studios and a cinema. It is planned to open in November.

• The Denver Art Museum plans to complete a $150m revamp on 24 October, inaugurating the Sie Welcome Center and reopening the seven-storey Martin Building. This will encompass a new exhibition space, galleries for architecture and design and Western American art and a rehang of the museum’s global collections.

*All events mentioned are subject to Covid-19 restrictions—please check times and dates accordingly.

This article is being updated to reflect changes to opening dates