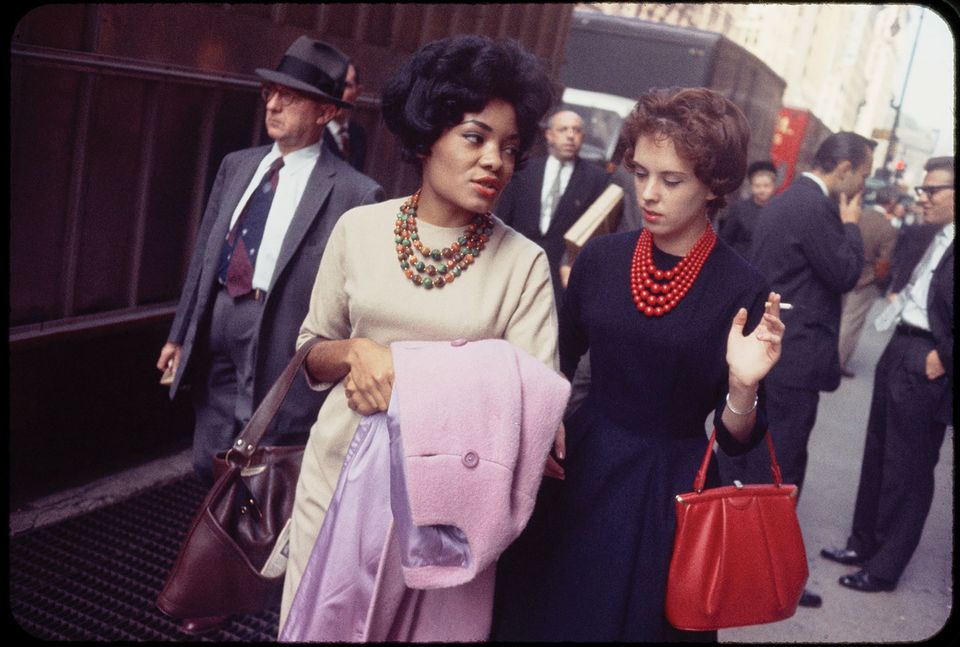 In 1967, the photographer and snapshot pioneer Garry Winogrand showed 80 colour slides in New Documents, the groundbreaking photography exhibition at the Museum of Modern Art in his native New York. But Winogrand’s display was cut short when the projector caught fire. This ill-fated MoMA show has inspired Garry Winogrand: Color, a new exhibition at the Brooklyn Museum (until 8 December). “Most people assume he only dabbled in [colour photography],” says Drew Sawyer, the show’s main curator. But Winogrand made more than 45,000 colour slides, which he very rarely printed, in the 1950s-60s. The exhibition has around 400 of these images in 16 projections, “the way Winogrand showed the work during his lifetime”, Sawyer says. The show is arranged so that visitors can view more than one of the four-to-five-minute slideshows at once. “I wanted the sense of a dynamic flow of images, a sense of how he worked on the street,” Sawyer says. This includes an entire projection carousel of images taken in Coney Island, the subject of some of the first still photographs Winogrand ever showed publicly, then in black and white (Winogrand often carried two cameras to shoot in both black and white and colour). Winogrand’s use of colour, then primarily linked to commercial or amateur family photographers, “really pushed what was considered fine art”, Sawyer says. Unlike how commercial photographers “sensationalised” colour, “for Winogrand, it was just another element of the picture—which was pretty radical for the 1960s”.

In the summer of 1925, flush with the success of a solo show in Paris, Joan Miró returned to his his home in the Catalan village of Montroig and faced the question of what he should do next to meet the expectations of his Surrealist brethren. The answer was The Birth of the World, a 6-by-8ft painting that is the centerpiece of an exhibition at the Museum of Modern Art (until 6 July). With around 60 works dating from 1920 to the early 1950s, the show explores the creation of Miró’s pictorial universe, presenting The Birth of the World as a turning point. Giving rein to his unconscious, Miró first dribbles and splashes paint onto the canvas; then he carefully fashions pictographs atop the ground. That mix of painterly spontaneity and calligraphic deliberation would persist in his work for decades, as can be seen in the other works in the show.

Frida Kahlo: Appearances Can Be Deceiving at the Brooklyn Museum (until 12 May) is an intimate look at Frida Kahlo’s life and work includes more than 100 of her personal objects, such as pre-colonial jewellery and traditional Tehuana clothing, most of which were locked away in her bathroom for 50 years after her death in 1954. The Mexican artist used such pieces to craft a personal image that reflected her political beliefs and culture, and to deal with physical disabilities from a traffic accident in 1925. Among the most poignant objects is a hand-painted plaster corset Kahlo made in 1944, which depicts her spine as a broken column surrounded by flowers and fruit. Other works by Kahlo, such as her piercing self-portraits, photographs of her by Edward Weston and Manuel Álvarez Bravo and Mesoamerican objects from the museum’s collection that are similar to objects that inspired her, round out the story.

A year after a racially tinged controversy, Moca Cleveland revises structure of its board of directors

A year after a racially tinged controversy, Moca Cleveland revises structure of its board of directors

about 11 hours ago
As regimes are challenged in Cuba and Haiti, a timely exhibition on power and resistance opens in Miami Beach