So you think you know your art? Brain teasers to test your knowledge of famous works 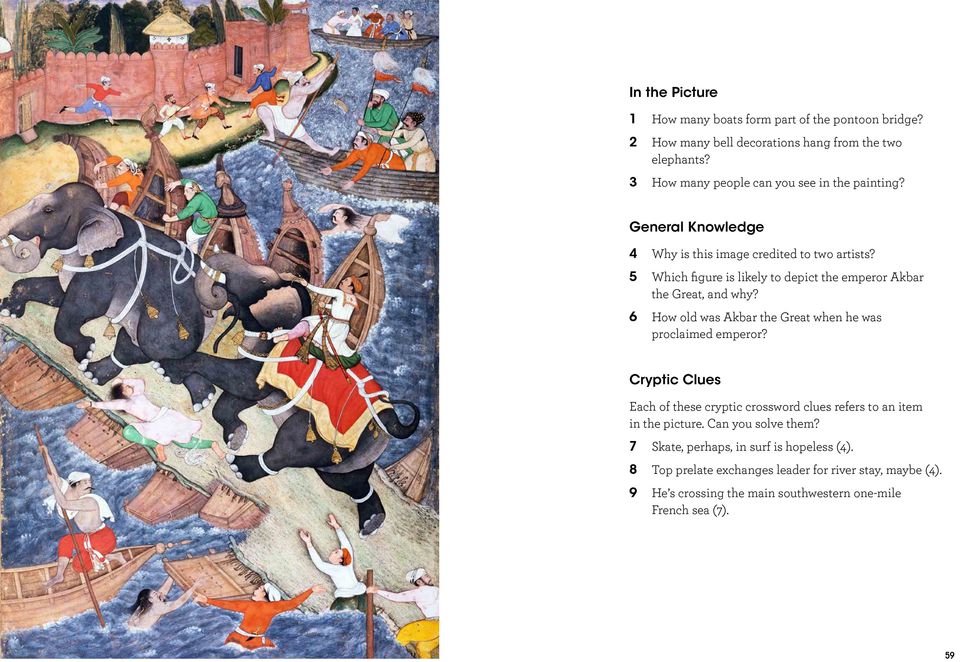 Basawan and Chetar Munti, Akbar’s Adventures with the Elephant Hawa’i (around 1590-95) Courtesy of the publisher

This book quizzes the reader on 36 old chestnuts of art, dating from a second-millennium-BC Egyptian papyrus to the scribbles of Jean-Michel Basquiat. Some of art history's best known works are included: Botticelli’s Primavera, Van Eyck’s Arnolfini Portrait, Titian’s Bacchus and Ariadne, Vermeer’s The Milkmaid, Manet’s A Bar at the Folies-Bergère, Van Gogh’s Starry Night, Picasso’s Guernica, and so on and so on (but where is that cliché of clichés, the Mona Lisa?).

Some of the tests tacitly acknowledge current multicultural and transnational concerns, such as the inclusion of Basawan and Chetar Munti’s scene from Akbar’s Adventures with the Elephant Hawa’i, shown here, which somehow seems to me to lack “instant recognition” status.

Each picture is accompanied by three sets of questions: about the picture itself, about relevant general knowledge, and a couple of “find the detail” picture puzzles. The book has been compiled by Susie Hodge, “with over 150 books published”, and Dr Gareth Moore (distinguished throughout by his title), a puzzle setter, the two of whom I imagine, spent all of a couple of evenings with a bottle of wine to put the book together. This is the perfect loo book or stocking filler. Mercifully the answers are included at the back in the same format as the question pages. Do you know in which Spanish region Miró grew up? Catalonia, but of course, you knew that all along.