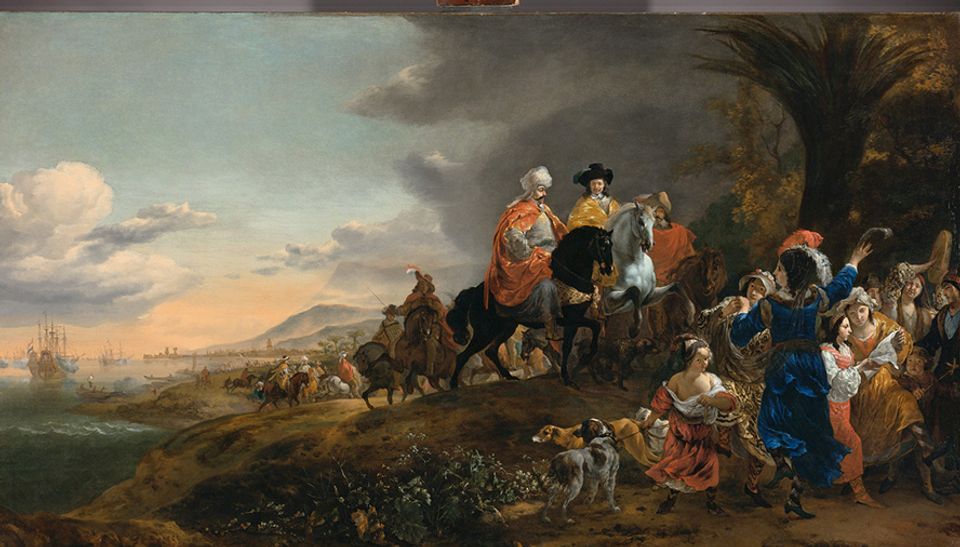 Jan Baptist Weenix, The Dutch Ambassador on his Way to Isfahan, 1653-54 Courtesy of the Rijksmuseum, Amsterdam

Not only were these artists prolific (Jan Baptist alone executed 241 paintings in his 18-year career), but they treated a prodigious range of subjects, from Mediterranean landscapes and port views to religious scenes, merry companies, hunting parties, still lifes, game or “trophy” pieces, and sturdy burghers’ portraits—often in combination. Their work is also populated with more exotic features evocative of Holland’s mercantile empire: Turkish potentates and African servants, South Asian cities, and flora and fauna from Dutch Suriname.

When occasion demanded Jan could go big: he is best remembered for his gargantuan wall canvases (“fixed paintings”), which were the size of tapestries. One of the latter, made for the Suriname sugar baron Jacob Henriques de Granada and formerly at Hearst Castle, even served as a backdrop on the Paramount lot during Hollywood’s own Golden Age in the 1940s with a starring role in Bob Hope’s Monsieur Beaucaire (1946).

The books are a significant scholarly achievement but can be unwieldy. Van Wagenberg categorises paintings methodically by type, such as “Shepherds with Herds” or “Merchants, Craftsmen, Beggars and Genre”. This approach is understandable given the sheer variety of genres, but it separates paintings that otherwise are quite similar (for instance, analogous ruins and staffage populate marine, shepherd and merchant pictures). The reader constantly flips back and forth between sections to look for similarities between works or to understand the chronology.

Jan Baptist lived the high life: a favourite of cardinals and plutocrats, he had a taste for fancy clothes and expensive art and spent his last years beyond his means in a castle outside Utrecht. After early training in that city and in Amsterdam, he made his career in Italy in the mid-1640s as part of the “second generation” of northern painters. He was welcomed into the famed Bentvogels artistic brotherhood and he served Cardinal Giovanni-Battista Pamphilj, the future Pope Innocent X. During and after his Italian sojourn he specialised in golden-hued scenes of the Roman Campagna, frequently with a seaport and often on a monumental scale, which he populated with herdsman, country women, riders, cattle and sheep. He also pioneered the game piece (in around 1648), a genre his son would take to a whole new level.

Jan Baptist is the more curious of the painters. His works are an incongruous mixture of Classical landscapes with ruins in the manner of Domenichino or Claude with Dutch figures, a response no doubt to the tastes of his affluent Netherlandish patrons. Their often abundant staffage include tow-headed youths and ruddy cavaliers sporting wide brimmed leather hats and high boots, and fair-skinned women wearing the shimmering silks and damasks of the affluent trading class. There is more than a hint of Holland’s empire in those strikingly hued fabrics, as well as in his pictures of Asian subjects. The grandest of these is The Dutch Ambassador on his Way to Isfahan (1653-59), his only historical painting and a triumphant celebration of Dutch supremacy in Asia with festooned Dutch East India Company battle ships and meticulously rendered Persian costumes, such as the khilat robe of honour. One yearns to know more about the circumstances of this extraordinary picture.

Weenix père also courted Dutch patrons by incorporating into his landscapes, tavern and genre scenes, hunting groups with greyhounds and spaniels, and game still-lifes that seem incongruous in his Mediterranean settings. At times the effect recalls a photography studio in which sitters pose in front of exotic backdrops, but never quite fit in (some are, in fact, studio portraits).

By contrast, his son’s portraits were set against fashionable French parks, often with gardens of exotic plants and animals from Dutch colonies (some of the latter stuffed studio props). Frequently fantasies, these gardens allowed city dwellers without country estates to enjoy what the author calls “nobility by association”. Indeed, in flattering social climbers and nobility alike Weenix fils was the Giovanni Boldini of his age: his sitters were lither and more elegant than those of his father, whether sea captains, nabobs of the Asian luxury trade, daughters of African governors, or South American plantation owners. His sensuously rendered trophy pieces, with their plush pelts, iridescent feathers and soft velvet pouches with sparkling buckles, gave them an appeal that was truly for the ages: Goethe could barely believe they were “the creation of human art”; Sir Joshua Reynolds thought that “they could not be admired too much”; Hitler flagged one for his Führermuseum in Linz; and the Fourth Marquess of Hertford snatched up the world’s largest collection for what would become the Wallace Collection, lovingly referring to them in 1867 as “agreeable rubbish for the country”. The glorious reproductions in these two volumes will no doubt win over some new fans for these extraordinarily versatile Dutch masters.