Spotlighting the hottest new talent in London, our bi-weekly emerging art feature will review shows by artists who have not had a solo institutional exhibition. All works are priced under £15,000. 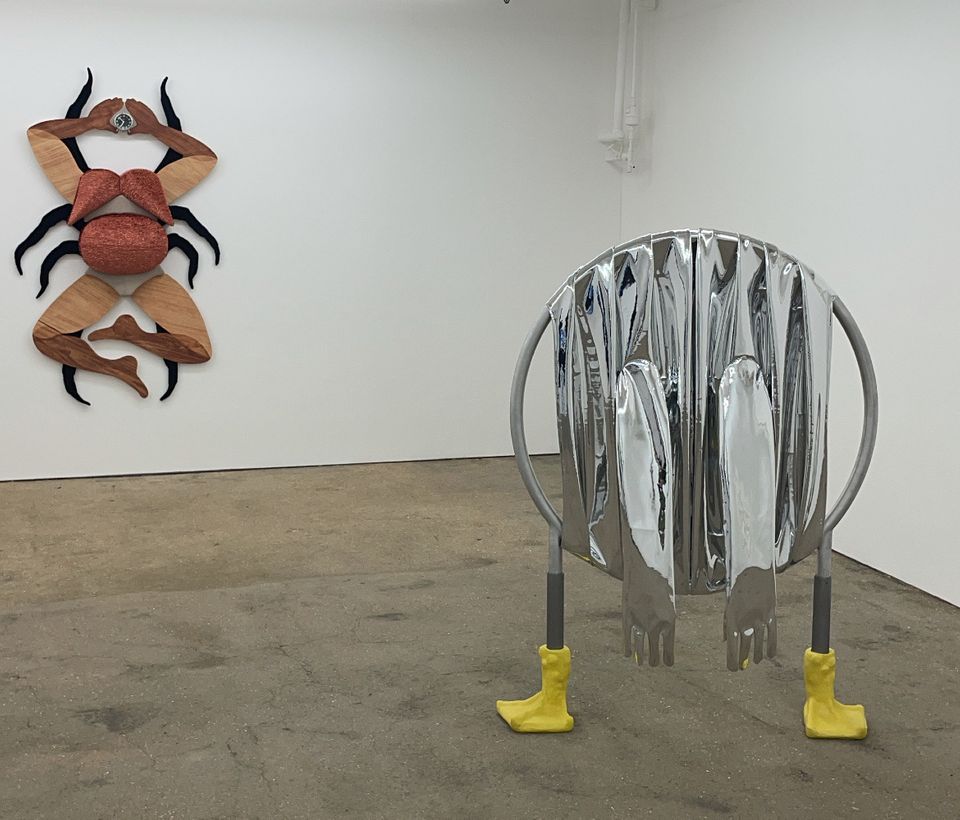 On the top floor of the Brooklyn-based artist Rose Nestler’s debut UK solo exhibition, a film installation, Flex Point (2021), shows a bizarre enactment of a barre fitness class. The instructor—jaw clenched, eyes wide and menacing—shouts out: “and smile, and tense, and wave like a royal—no peasants!”. Her nervous students, fitted with plastic shield masks and equally distressed expressions, frantically gyrate and bend on command. Occasionally, panning shots of a city's financial district are shown.

For Nestler, barre—the latest fitness trend promising quick results to the urban professional—represents a logic deeply embedded into the corporatised feminism so prevalent among her generation and milieu. Today's ideal woman, we led to believe, is a meticulous, multi-hyphenate who maximises her time to the fullest (barre class is fit into a 45 minute gap between work meetings). She is also flexible in her values, perhaps working a corporate job while posting anticapitalist infographics on Instagram. But what does someone who can embody such a slippery, even schizophrenic philosophy look like?

Attempting to answer this question are nine sculptures that occupy the gallery’s lower two floors, in which Nestler stitches together markers of modern womanhood into surreal, composite pieces. These take on forms as varied as a horse's head with a silver braided wig, or a pink gym bag with a set of splayed legs affixed on top. The works, many of which are made from reupholstered cushions and athleisure apparel, are plush, precisely formed and contain a campness that speaks to the inherent theatricality of performing the rituals of an aspirational, millennial lifestyle. The best are those in the basement which call back to women from ancient mythology, such as Spinner, referencing the Greek tale of Arachne. Her rust-coloured velvet belly and conical breasts are surrounded by 10 appendages splayed on a wall. A faint ticking emanates from a metal timepiece in place of her head, quite possibly her biological clock threatening to run out before she's received a promotion at work. 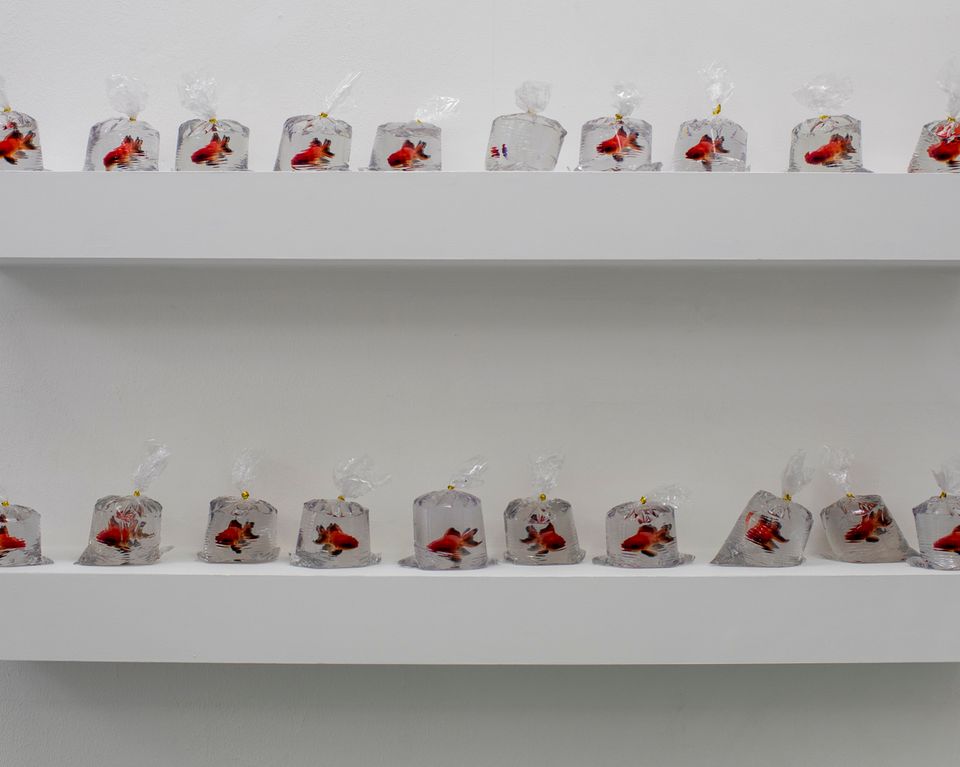 A duo show of sculpture, film and painting by the artists Billy Fraser and Mitch Vowles, both recent graduates of the Chelsea College of Arts, ties together themes of class, Britishness and childhood to question whether one can ever grow out of, or escape, an identity.

Fraser’s work takes us back to sources of his childhood wonder and fascination, a number of which he has cast in resin. Several of these call back to English fun fairs: a series of holographic goldfish in resin resembling plastic bags filled with water; candy-coloured primed fireworks arranged like a fossilised rock collection. Further holographic works include a self-portrait in resin, formed of 10 layers that produce the effect of his face floating underwater.

Meanwhile Vowles uses vestiges of English working men's pubs such as salvaged snooker tables to create neat, minimalist wall-hanging sculptures. He looks too at fashion, forming freestanding sculptures from vintage Levis jeans that were formerly associated with physical labourers but have since been adopted by the fashion community, shooting up in price and cultural capital. Accompanying, and not for the faint-hearted, is a 16-minute-long film that shows a video clip of a young, muscly Welsh man consuming with frenzied bravado a pint of vodka and a dead chick, among other substances.

Both artists, who focus their work on youthful naivety and English working class culture, take on subjects that are prescribed low commercial value, but aspects of which are readily adopted by the art world to much financial gain. This approach takes on a greater political significance through various cultural artefacts that tie the show to the New Labour period of the 1990s and early 2000s, along with its concomitant social promises. It poses the charged question as to whether art can truly raise someone from their station, or if only aesthetics can be adopted, while the person is cast off.

Every two weeks we provide a snapshot of the most exciting, forthcoming emerging art shows in London, as selected by Seb’s Art List.

Still Journey is made up of work produced at The Columbia Hotel's spring residency. Focusing on photography and painting, the show explores the theme of human connection in the digital age.

A graduate showcase of work from the college's MA programmes, taking place both on-campus and in the neighbouring South London Gallery. Book time here.

All works from the show can be viewed online here.

The show is taking place in a former shop front on Fleet Street, just off Ludgate Circus, and is presented in partnership with gallery/art space provider Harlesden High Street.