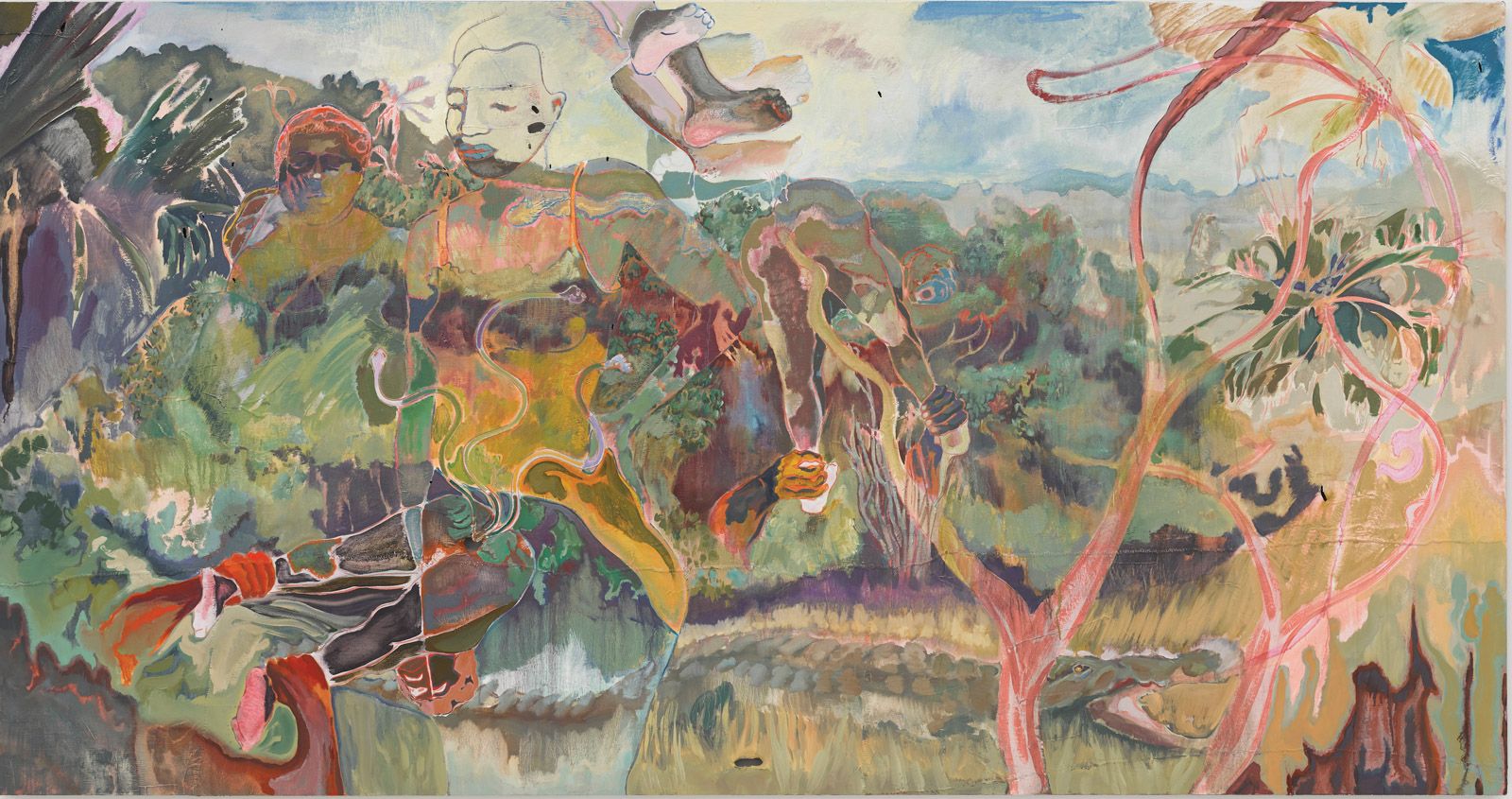 Michael Armitage's Courtesy of the artist

How does Michael Armitage charge his paintings with such electricity? This show features just 15 of his works but their power is tangible. Alongside them are 31 works by figurative East African artists, selected by Armitage in honour of their critical impact on his practice. All of Armitage’s paintings here are made on lubugo bark and for an artist who was born in Kenya but trained at art schools in London, you can see why a distinctly East African textile would appeal. With all the vitality of its imperfections, the fibrous grain of the cloth, scarred with the seams where patches have been stitched together, energises his compositions.

Some of Armitage’s paintings have the additional bite of recent political events. Hornbill (21st-24th September 2013) (2014) features one of four terrorists responsible for the Westgate shopping mall attack in Nairobi, in which 67 people were shot dead. The palimpsest of figures drift in and out of the field of paint as if in a dream or reverie; the paintings' intoxicating colours—passages of blue, accented by neon pink with a bass line of verdant green—seduce the eye. After a year in which so many of us have felt glazed by our relentless exposure to screens, the charge Armitage delivers is just the reboot we need—the electricity of painting torn straight from the book of life 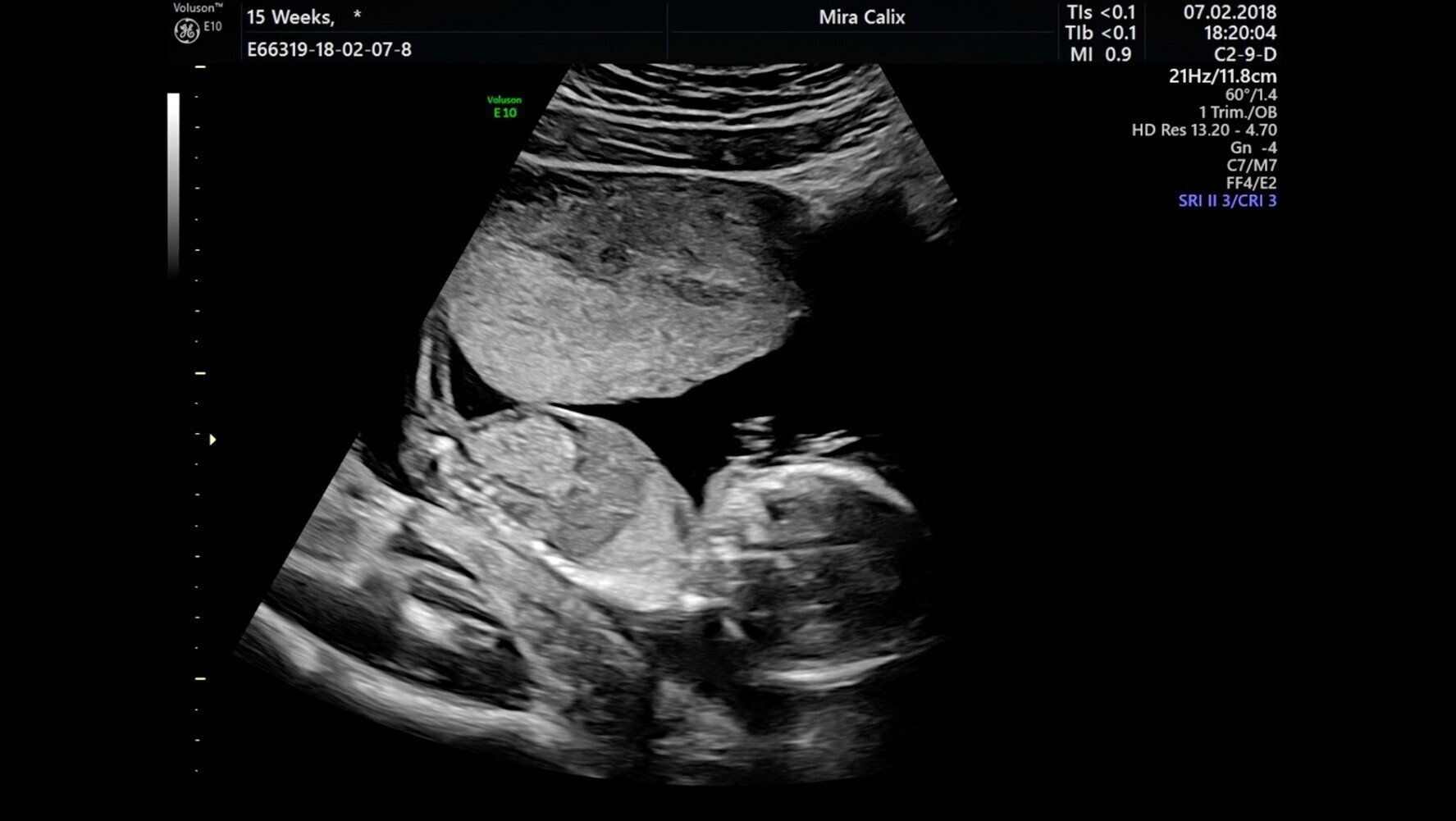 Inaugurating Mimosa House's new London space, this multimedia group show responds to the concept of the syncope, described in music as "an unstressed 'empty' beat which interrupts the expected rhythm". At a time of unprecedented upheaval and suspension, the pandemic is fertile ground for a show that considers how a period of delay can be an opportunity for transformation and dissent.

Music features in many of the works, such as the sound piece 16 Weeks (2018) by Mira Calix that maps the ultrasound-recorded movement of a foetus in utero to produce corresponding sound signals that are then transcribed into an orchestral piece. The Frieze 2019 Artist Award winner Himali Singh Soin presents a moving image work in which she scans the entire text of Virgina Woolf's 1932 novel The Waves for each semicolon (the novel is notable for its frequent and pioneering use of the punctuation, itself similar to syncope), effectively reducing the book's content solely to its rhythmical pauses. A newly commissioned film by the DJ and artist Chooc Ly Tan features an interview with a dancer who participates in ballroom vogueing competitions. They describe how the pause before a big beat drop can be used to introduce a new move: an invitation to display a daring feat of skill and reveal the unexpected. 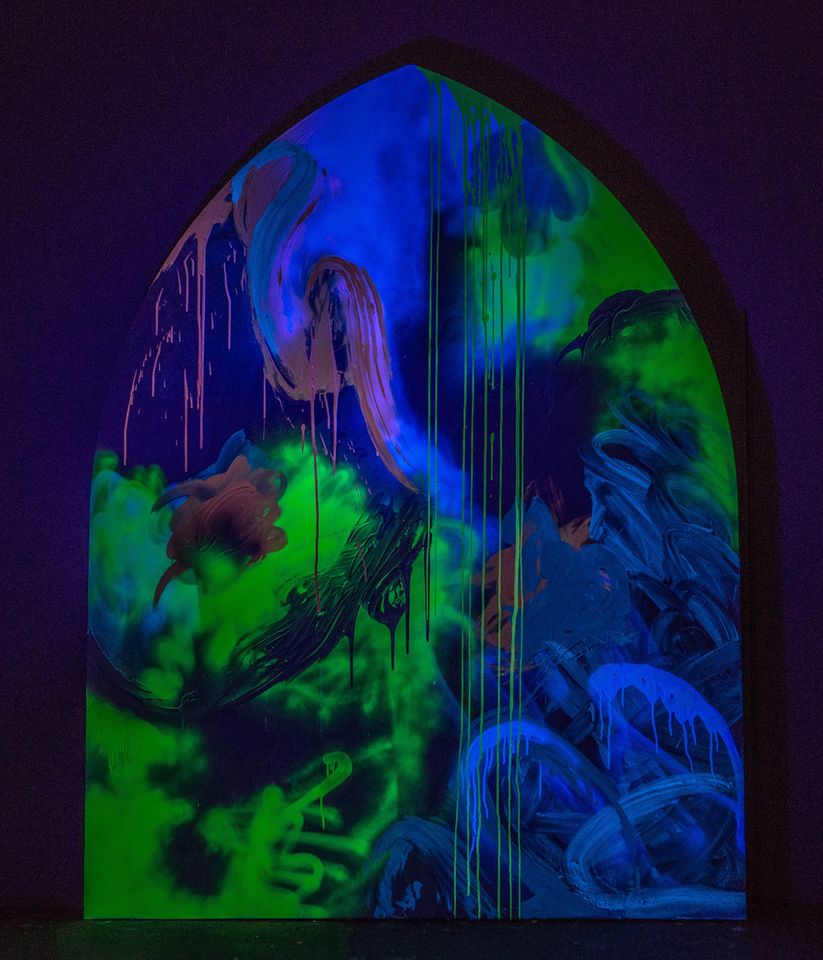 Kate Dunn: The Tabernacle—Welcome to Pharmakon

For those who have grown accustomed to the still of lockdown, Kate Dunn’s rave-inspired multi-sensory painting installation may prove an overwhelming experience. A soundtrack of thumping gabber music (a hardcore genre of distorted electronic dance set to a breakneck tempo), accompanies a series of large-scale canvases shaped like Romanesque altarpieces, on to which Dunn has slapped photo-reactive UV paint in unbridled, gestural brushstrokes. Overhead the lights change according to the manic beat, turning the paintings into pulsating bodies of luminescent streaks reminiscent of strobe visuals found in 1990s nightclubs.

"I wanted to make something intense—a return to the body after a period of numbness," Dunn says. Having trained classically as an artist in Florence, she compares the experience of rave to religious sermons, drawing direct parallels between the convulsing masses of a gospel congregation to those on a darkened dance floor. At 200 BPM, gabber's pace pushes against the limits of the human heart and drives its disciples close to physical breaking point. But through its relentless pulse, a rapturous quality is produced, delivering a sense of unity of which we have been so bereft this past year. After such loss and isolation, it seems vital that our art spaces offer experiences as primal and intensely communal as that of a shared beating heart.