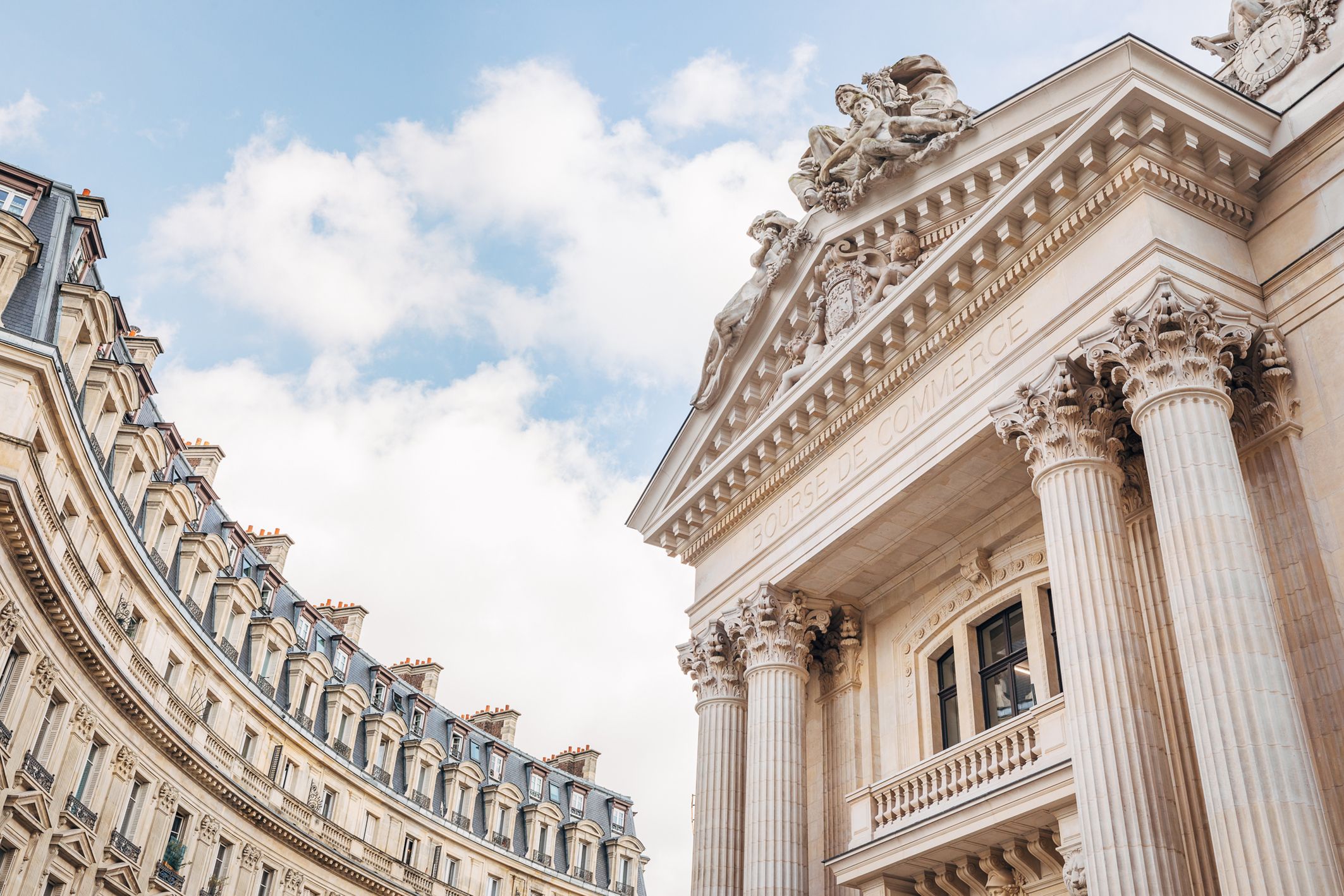 Twenty-one years after François Pinault first announced he would build a museum in Paris to house his 10,000-work collection, the 84-year-old French billionaire has finally achieved his goal.

Attempts had been made before: in 2000, the Kering founder chose a deserted island on the Seine, west of Paris, but the suburban city council killed the project. More recently, the opening of the new site in the heart of the capital, next to the Louvre, was delayed several times by the Covid-19 crisis. Finally this week, at a total cost of $194m, the Pinault Collection will open its doors at the Bourse de Commerce.

Due to Covid-19 restrictions, visits can be made through reservation only, and a maximum of 600 people are allowed in the building at once—one-third of its normal capacity. Directional traffic lines have also been put in place, although the building is designed for people to roam at will. 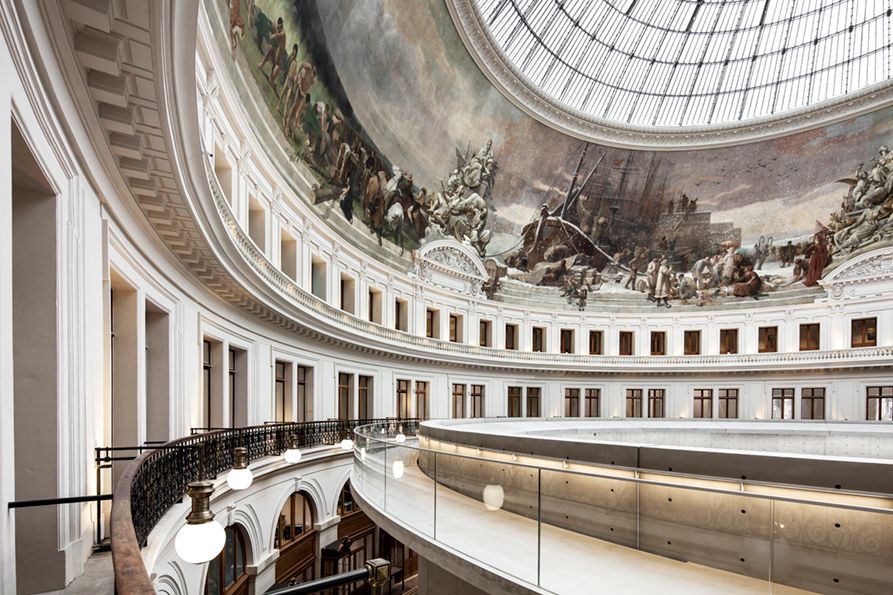 The Bourse de Commerce building—formerly Paris's commodity stock exchange—was built in the 18th-century with a striking circular shape inspired by Roman monuments—an architectural style uncommon in France. Even for many Parisians, the 70m-wide and 35m-high hall with its internal spiral arcade will be something of a discovery and few have before been able to admire its cupola, almost as large as the Pantheon’s in Rome. It is circled by a series of 19th-century paintings describing trade on the five continents, which were all restored prior to the museum's opening. No attempt has being made to hide references to the building's links to the slave trade, but guest artists including David Hammons have addressed this historical context.

The building was built as a corn and flour storage for the city in the 1760s on the site of a former royal palace. A 31m-high tower built in 1574 for Queen Catherine de Medici was miraculously spared and is now topped by Philippe Parreno’s changing coloured disks. The cupola’s framework, first made in timber and rebuilt in cast iron at the start of the 19th century, was a remarkable feat for its time. In the five-year renovation, its glass canopy was replaced by double glazing to allow for greater temperature regulation within this vast space. 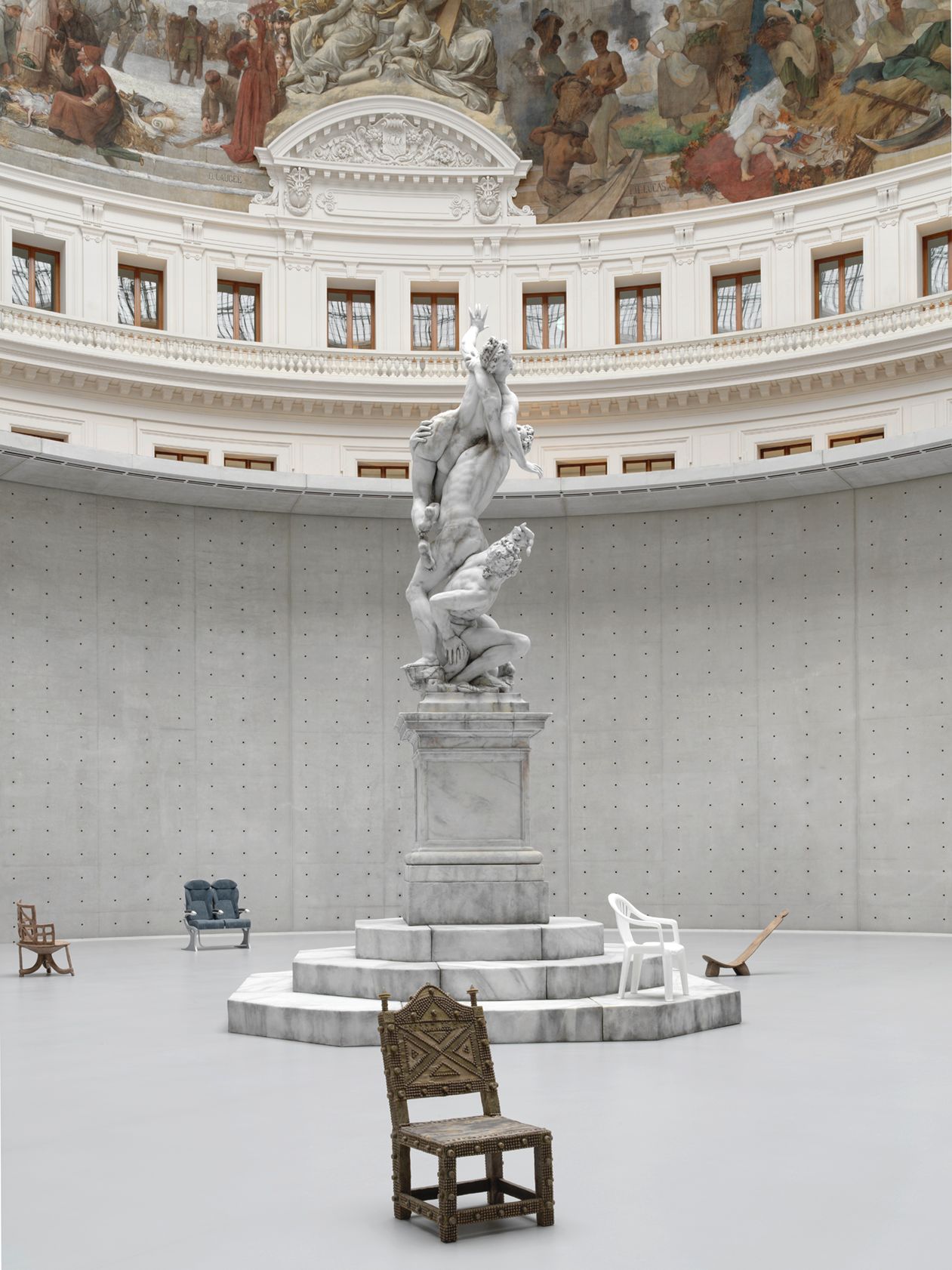 Inside, the site's architect Tadao Ando has built a 9m-high rotunda in pale grey concrete in keeping with the building's historical character. Its inner circle is occupied by Urs Fischer’s wax copy of the 16th-century Florentine sculptor Giambologna’s Rape of the Sabine Women. Each morning, holes are drilled and wicks are inserted to be lit, causing the progressive meltdown of a work that will disappear over the next six months. The model seemed impressive when it was shown for the first time in Venice’s Arsenale ten-years-ago, but this 29m-wide-space changes the perspective. The pedestal has been raised, but one is unsure whether a few wax chairs surrounding the statue suffice to occupy such a huge space. Overall, the Bourse de Commerce contains ten exhibition spaces, including seven white-walled galleries, allowing a permanent turn-over that had not been possible in the two sites that Pinault occupies in Venice. Martin Bethenod, director of the Pinault Collection, tells The Art Newspaper that he plans to set up around 15 new projects each year, but that the first changes will have to wait till next year.

Several major works on show have already been exhibited in Venice, either at the Biennale or in Pinault’s museums, but Bethenod says that they are all now staged differently. A funny little mechanised mouse by Ryan Gander pops its head through holes in the wall. And 52 taxidermied pigeons by Maurizio Cattelan circle the rotunda. 200 of these showed up in 1999 at the Venice Biennale as Tourists and then returned 2000 strong as Others for the 2011 edition—a reference to the influx of migrants that crossed the Mediterranean around that time. Pinault himself stresses the political character of this first exhibition, praising “the values he has always championed—the thirst for freedom, the rebuttal of injustice, and the acceptance of diversity”. A number of the works on show are by Black artists from around the world who have never been exhibited in France, and most rarely in Europe.

Nowhere is this manifesto clearer than in a large gallery devoted to 30 works by David Hammons, which includes a cage that is the exact size of a cell in San Quentin’s death row. In the only room that has right angles and straight walls hang three portraits painted in a hyperrealistic style by Rudolf Stingel. A tribute to figurative paintings brings together Peter Doig, Luc Tuymans and Martin Kippenberg, with a gripping “self portrait” of Kippenberger's hands in fauve colours, along with paintings by the artist Antônio Obá, who digs through the African roots of Brazil.

A gallery dedicated to photography, which gives a central position to works by Martha Williams and Cindy Sherman, finishes with a denunciation by Louise Lawler of the infamous 1987 Helms Amendment. This forbade the US's Centre for Disease Control (CDC) to provide Aids prevention for fear of “promoting homosexual activities” and was almost unanimously adopted by US senators at the time, including the current US President Joe Biden.

The opening exhibition also includes other Pinault signature artists, including Marlene Dumas who shows a series of 36 skulls and Bertrand Lavier’s ready-mades, staged in 19th-century wooden showcases around the arcade. Underground, in front of the auditorium, Pierre Huyghe and Tarek Atoui's staged musical and artistic atmospheres are placed alongside two massive 19th-century refrigerators that were found under a pile of rubble during the building works and have now been restored—the last trace of the site’s industrial past.