A solo show by Wangechi Mutu comments on the museum’s history, while an exceptional archaeological presentation gives antiquity a fresh feel 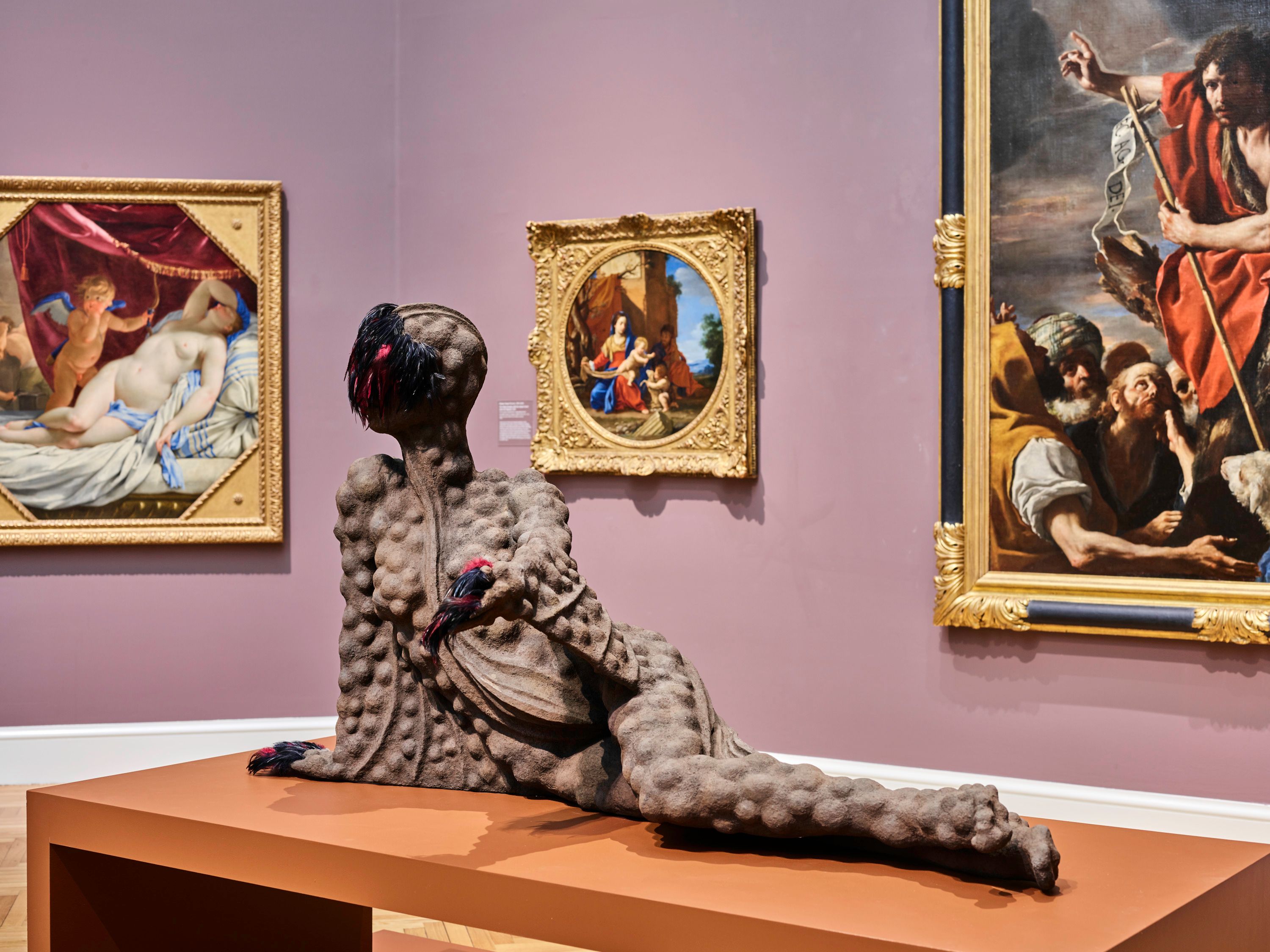 Wangechi Mutu's Outstretched (2019)installed in the European galleries of the Legion of Honor, San Francisco Photograph by Randy Dodson, courtesy of the Fine Arts Museums of San Francisco. © Wangechi Mutu. All rights reserved. Courtesy the Artist and Gladstone Gallery, New York and Brussels

Visitors to the Legion of Honor in San Francisco, which reopens to the public today (7 May), get a double treat of two very different shows—originally scheduled to take place a year apart—that together form an interesting diptych of the Western museum: The Last Supper in Pompeii: from the Table to the Grave, and Wangechi Mutu: I Am Speaking, Are You Listening? The 18th-century excavations of the ancient Roman cities of Pompeii and Herculaneum, destroyed in 79 AD by the eruption of Mount Vesuvius, fuelled the Enlightenment and the establishment of the “encyclopaedic” museum, while the Kenyan-US artist’s site-specific exhibition challenges the colonial legacy and Eurocentric racism of such institutions, the Legion of Honor included.

Installation view from Wangechi Mutu: I Am Speaking, Are You Listening? at the Legion of Honor, San Francisco, with the works Shavasana I (2019) and Shavasana II (2019), MamaRay (2020), Crocodylus (2020) © Wangechi Mutu. All rights reserved. Courtesy the Artist and Gladstone Gallery, New York and Brussels. Photo: Gary Sexton. Courtesy of the Fine Arts Museums of San Francisco

Mutu’s work immediately confronts visitors upon their arrival, smashing the sanitised, stately feel of the museum’s neoclassical building. As if walking into a crime scene, the first thing they will see are the splayed-out female figures, Savasana I and Savasana II (sanskrit for “corpse pose”; 2019), lying at the feet of Rodin’s The Thinker, mats covering their torsos and faces, and colourful high-heeled shoes falling off their feet. Visitors therefore cannot step into the colonnaded courtyard without thinking about violence, particularly against Black people. Further along, two fantastical bronzes (Mama Ray, 2020; Crocoydlus, 2020), which face the museum, do not so much greet visitors as appear ready to charge the institution.

These bronze works beat the European canon at its own game. But the most compelling sculptures are the bizarre and beguiling feminine figures found in the European art galleries, which do not need to play any game to prove their significance. These works, made of natural materials from Africa, and referencing extra-European practices of body adornment and ritual, have been scattered by Mutu and the curator Claudia Schmuckli alongside works in the permanent collection to challenge the dominant Western art historical narratives. 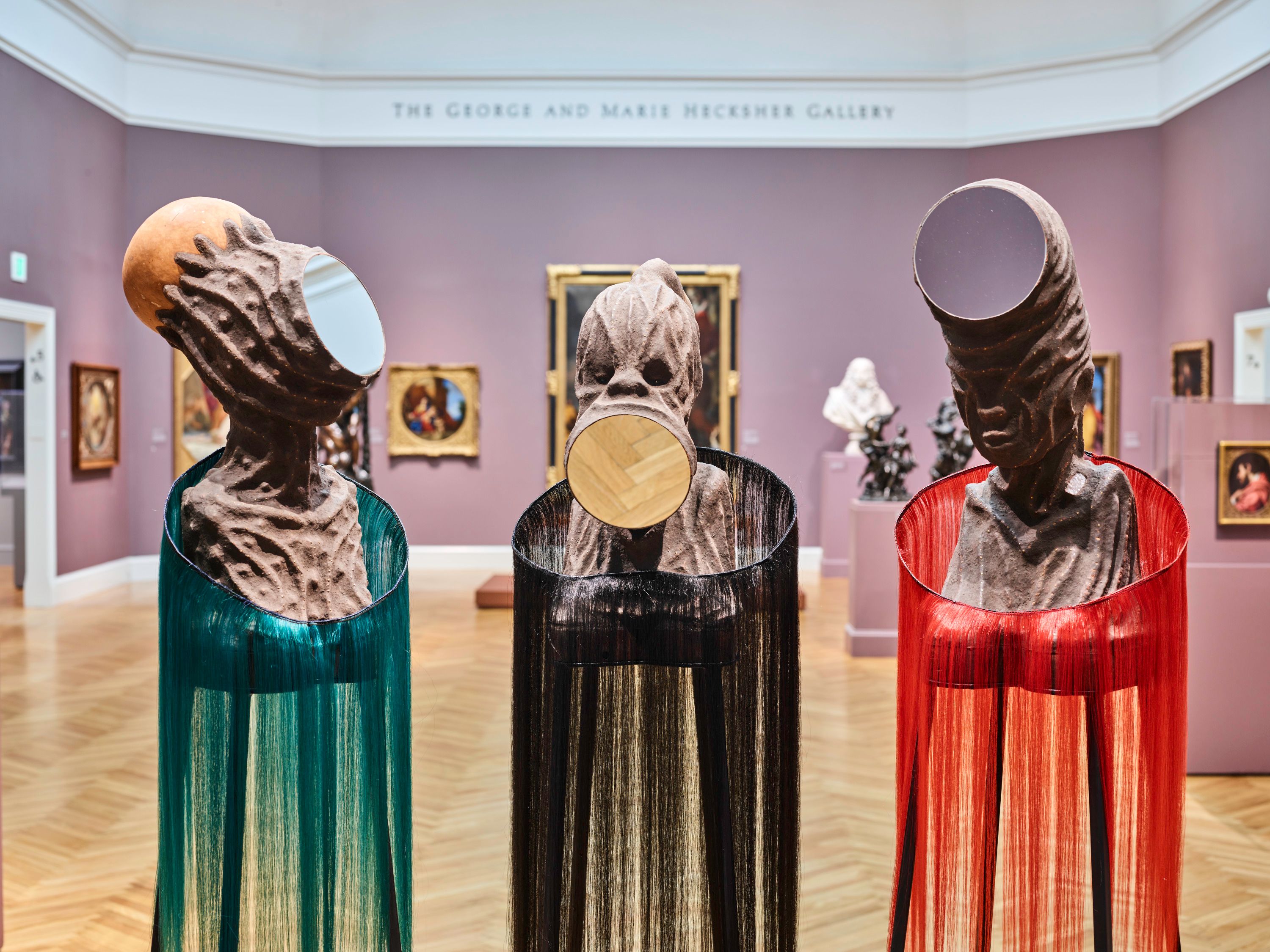 In a chapel-like gallery dedicated to Rodin, for example, monumental strands of beads hang above a figure that resembles a skeleton from the doorway, with limbs of twisted branches, but a pregnant woman from the side (Sentinel IV; 2019). Elsewhere, a reclining female figure with bumpy armour-like skin (Outstretched; 2019) plays against Le Sueur’s Sleeping Venus (1638-39) in the background. Visitors might miss Mutu’s new video work, My Cave Call (2020), since it is located further on in the galleries, but anyone who walks by will be beckoned in by the magnetic seated cloaked figure Seeing Cowries (2020), dotted with shells that are both a valuable currency and a symbol of fertility, which has a palpably holy and mystical aura.

Downstairs, the concurrent show The Last Supper in Pompeii: from the Table to the Grave focuses on the ancient city’s love and production of food and wine, a largely reworked version of an exhibition held at Oxford’s Ashmolean Museum. Delayed by more than a year due to the global pandemic, it takes on a new poignancy at this time of collective grief, and the curator Renée Dreyfus has created a sensitive show that even acknowledges the dead from both Pompeii and Covid-19 at the exit.

Last Supper in Pompeii: From the Table to the Grave at the Legion of Honor museum in San Francisco Photo: Gary Sexton. Image courtesy of the Fine Arts Museums of San Francisco

The show begins, however, on a jovial note with a white marble statue of Bacchus, the god of wine, fertility, and festivity. He is upstaged—as are the rest of the displays—by the stunning frescoes behind him of birds and plants which decorated a home in Pompeii, the colours so unbelievably vivid they almost seem unreal. They have never before travelled to the US, and the team at the Archaeological Park of Pompeii, which lent them, held a video call with the San Francisco team to ensure their proper installation.

Thematic sections make the show more approachable. An area of X-rated objects with a “naughty” warning label might not be for everyone, but a section on the kitchen—still everyone’s favourite room—has fascinating artefacts like a clay vessel with a ramp inside where a dormouse (a delicacy) would be kept for fattening. Another has bits of food from Pompeii, like grains and the popular pomegranate, but also a cast of a piglet that died in the disaster. While it makes sense to place this animal (a favourite meat) here, there is something jarring and terribly sad about seeing the poor creature, which must have suffered, presented as food in an otherwise empathetic show.

Last Supper in Pompeii: From the Table to the Grave at the Legion of Honor museum in San Francisco Photo: Gary Sexton. Image courtesy of the Fine Arts Museums of San Francisco

A welcome effect of the pandemic on the exhibition is the spread-out footprint, with smaller, less crowded display cases and limited wall text to avoid crowding. Archaeological shows often seem to unnecessarily bombard visitors with display cases crammed with artefacts. Dreyfus’s digestible less is more approach is engaging and digestible, like the single loaf of carbonised bread, found in an oven, displayed beneath a fresco of a well-dressed man handing out bread—perhaps a politician pandering for votes, she says.

Nowhere is this pared-down approach more powerful than in the last gallery, painted a sombre purple, which contains the resin-coated remains of a woman who perished in the Pompeii ash cloud. Although it is always strange to see a human being displayed in a museum, this woman has been treated with reverence, placed in a tomblike niche with her jewellery on display nearby. “She didn’t have anybody to celebrate her at a funeral or a banquet, no one to follow her into the next world, so she represents for us an opportunity to mourn and think about those people that were lost,” Dreyfus says.