The London exhibition has many highlights, but viewing this long-planned show is unlike anyone could have envisaged before the coronavirus pandemic 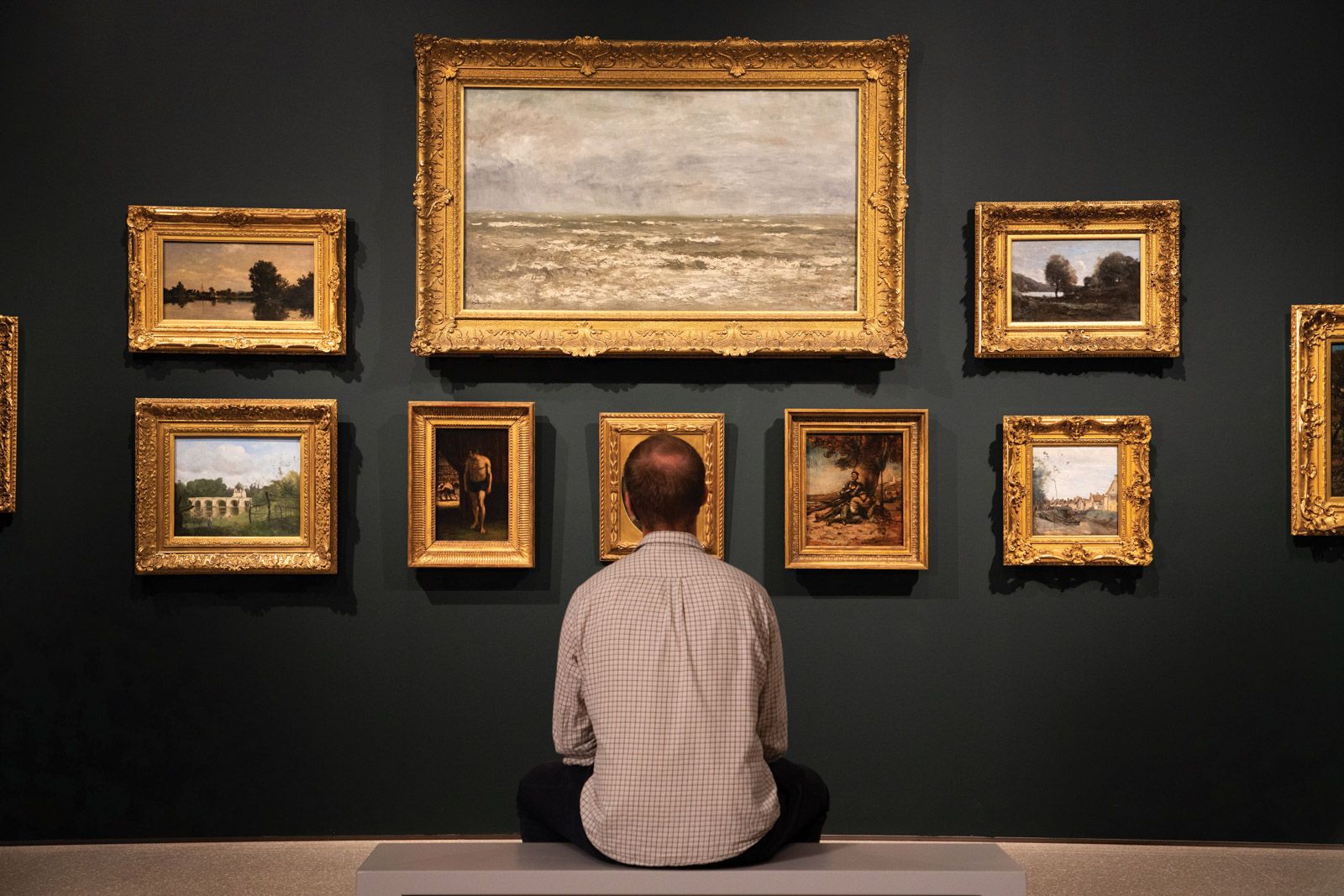 The 60 paintings had all arrived, ready to be hung—but then the coronavirus closure hit on 17 March. This was just 12 days before the planned opening of Gauguin and the Impressionists: Masterpieces from the Ordrupgaard Collection. Still in their crates, the pictures remained in the storeroom of London’s Royal Academy of Arts (RA).

The light-infused Impressionist works are now finally hanging. For art lovers, it brings joy to see paintings once again after months of lockdown, and it is an even greater pleasure when they are works which will be fresh for most British gallery-goers. But what is it like to view art in the coronavirus era? Masks are obligatory, making for a slightly uncomfortable experience. The upside is that there are few visitors, quite a contrast with the usual huddle around the paintings, especially in popular shows on Impressionism, and offering a welcome opportunity to savour the art close up.

The RA faced a logistical nightmare in sorting out its exhibition programme in the wake of the coronavirus closure. Among the dilemmas was what to present in the Gabrielle Jungels-Winkler Galleries, inaugurated two years ago in the Burlington Gardens building. Originally Gauguin and the Impressionists was to have closed there on 14 June, to be replaced by Cézanne: the Rock and Quarry Paintings—a show that had opened at Princeton University Art Museum just a week before the US lockdown. Reluctantly, the RA cancelled Cézanne and opted to extend Gauguin and the Impressionists.

The exhibition comes entirely from one place, the Danish-based Ordrupgaard collection. This made it logistically easier for the RA to get the loans extended, which would have been much more complicated for an exhibition with dozens of lenders.

The Ordrupgaard is currently closed for building work and although it was due to reopen late this year, this has been delayed slightly and it is now scheduled for next spring—so the extension was readily agreed. London is the last stop on the Ordrupgaard touring show, which during the past three years of its building project has been presented in Paris, Ottawa, Padua, Martigny, Prague and Hamburg. Loan fees from seven venues will contribute towards the cost of the £16m extension, which has been designed by the Norwegian architects Snøhetta to provide improved display space for the French pictures and temporary exhibitions. The extension is being named Himmelhaven (heavenly garden), reflecting its site in a leafy suburb of Copenhagen.

The show presents just over half the Ordrupgaard’s French paintings, in general the finer works. The title of the RA exhibition should pull in the punters, but is slightly misleading. There are eight Gauguins, just over a tenth of the show, and only half the remainder are Impressionist works (the rest are mostly earlier, plus a few Post-Impressionist and Modern pictures).

As with many private collections, there is a fascinating story about the people behind it. The Ordrupgaard pictures were assembled in the early 20th century by Wilhelm Hansen (1868-1936), who made a fortune selling life insurance, and his wife Henny (1870-1951). They benefited from the First World War, when art prices were low, and bought voraciously from Parisian dealers. The Hansens also built a villa in Ordrup, an area in the northern outskirts of Copenhagen (“gaard” means country estate). In 1922 Wilhelm suffered a financial loss and had to sell off half of his collection, but his fortunes soon recovered and he then started buying again. 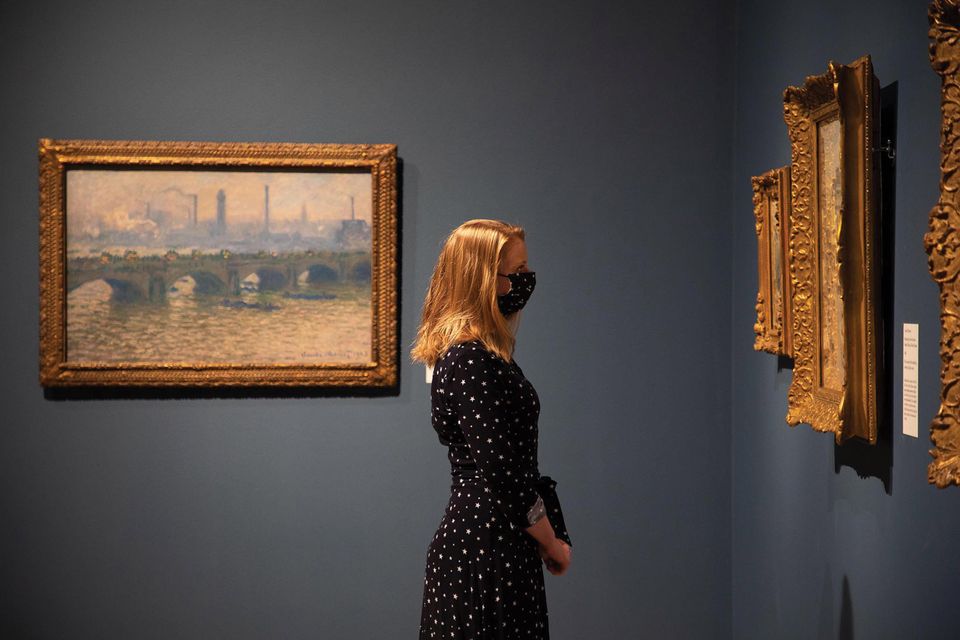 A masked (and socially distanced) visitor at the Royal Academy exhibition, with Monet’s Waterloo Bridge, Overcast (1903) in the background Photo: © David Parry/ Royal Academy of Arts

In the RA exhibition, labels on the paintings mainly give just the artist, title and date, since, unlike a monographic show, most visitors here are unconcerned with a painter’s development (succinct labels are also good for social distancing). Although the Hansen story is briefly explained in wall texts, more detailed information and a few more early photographs of the interior of their villa would have been welcome, since it is the couple’s collecting that binds the show together. Normally such information would also be conveyed with an audioguide, but because of Covid-19 these are not available (an audio explanation can be downloaded onto a mobile phone).

The presentation is slightly confusing, at least in terms of chronology. The first room has mainly Impressionists (1860s to 1890s); the second one reverts to earlier 19th-century paintings; and the final room features “Impressionist Women” (with female artists or sitters), ending with a bang: the eight Gauguins.

The centrepiece of the Gauguin display is the striking portrait of Jeanne Goupil (1896), the nine-year-old daughter (looking rather older in the painting) of a French couple in Tahiti. The final two Gauguins feature Tahitian women, with the wall labels giving the now almost obligatory disclaimer: “His depictions of Polynesian women often reflect his fantasies of a supposedly ideal ‘primitive’ society, which, problematically, he also lived out by forming sexual relationships with young Polynesian girls.”

As with almost any private collection, the works are of varied quality—but that is part of the interest of such presentations. Some individual paintings deserve to be singled out. There is a powerful picture of bathers by Cézanne (around 1895). Londoners always enjoy Monet’s depictions of the Thames, so it is uplifting to see Waterloo Bridge, Overcast (1903), despite the smog. There are marvellous seascapes by Monet (around 1866), Gustave Courbet (1869), Charles-François Daubigny (1874) and Jules Dupré (after 1875)—with each artist capturing waves in their personal ways. Pissarro, Renoir and Sisley are represented by fine works, too.

While the RA will be delighted to welcome visitors back, it is a first step in tackling the turbulent situation facing the institution. An RA spokeswoman said that the galleries can accommodate only around 20% of their normal visitor numbers, although actual figures are not being released. We estimated that it is likely to be seen by around 1,000 people a week, so for the ten-week run the total would be about 10,000. From a financial viewpoint, 10,000 visitors is disastrous, because of the loss of revenue from tickets (£17 standard) and shops and catering. But the alternative of remaining closed would arguably have an even more dire long-term impact. Prompt opening up after the lockdown has been essential.

The show—bursting with the great artists of the 19th century and with many real highlights—is ideal for Londoners making their first tentative foray into galleries after months in lockdown. The front-of-house staff are all welcoming and reassuring. But the experience of visiting the Academy is certainly different for the moment, and let’s hope it soon all becomes easier.

• Gauguin and the Impressionists: Masterpieces from the Ordrupgaard Collection, Royal Academy of Arts, London, until 18 October. Booking is essential at royalacademy.org.uk, but with limited availability tickets may well have sold out