In her book, Lydia Hamlett unpacks the literary, cultural and political significance of “the animated wall” Mural paintings are some of the most ambitious works of art commissioned by British patrons during the 17th and early 18th centuries. From Rubens’ work at Banqueting House, Whitehall, to James Thornhill’s at the Royal Hospital, Greenwich, they are a vital chapter in British art history. The poet Richard Steele wrote of Greenwich that it was not “in the Power of Words to raise too great an Idea of the Work”.

It has taken an interdisciplinary approach to open up research into these ambitious and complex works, with renewed interest stimulated by major conservation and restoration projects at St Paul’s Cathedral and the Royal Hospital, as well as last year’s British Baroque show at Tate Britain. Lydia Hamlett’s Mural Painting in Britain 1630-1730: Experiencing History gives the subject a central place in the discussion of art and meaning in Britain’s royal palaces and aristocratic mansions.

Through murals, patrons could communicate their personal ideals and dynastic connections, as well as their political and philosophical messages

Hamlett unpacks the literary, cultural and political significance of grand mural projects, which were known as “histories”, whether the subject was mythological or not. As she points out, their effect on the viewer was experiential; reacting to them was unavoidable because “their grand scale and interactive forms begged discussion”. These works were an opportunity to celebrate sophistication as well as magnify the character of the monarch or member of nobility responsible for creating the great interiors of the day—often drawing on the skills of artists from the continent, including Antonio Verrio and Louis Laguerre. Through murals, patrons could communicate their personal ideals and dynastic connections, as well as their political and philosophical messages, particularly in the great Whig country houses of the 1680s and 90s.

The potency of the Stuart court masque tradition shaped the intention and experience of these murals. Hamlett’s scholarly examination delves into this cultural inheritance, showing how illusionistic and mythological murals drew on the more ephemeral art form, developing it into a concrete and lasting visual manifestation of power. The 1630s painted ceiling (on canvases) at Whitehall’s Banqueting House is one of the great interior schemes of the 17th century. This is followed in significance by the interiors of Wilton, analysed here for the first time in terms of the sequential effect, with the meaning of scenes from classical literature explored against the dramatic political shifts of the 1640s.

After the Restoration, Charles II transformed the interiors of Windsor Castle, using murals to create an elaborate and fixed celebration of renewed monarchy and nation. Hamlett traces the potent quality of this sequence as a “controlled ambulatory” that ended then in a double visual crescendo in St George’s Hall and the Royal Chapel. Stephen Orgel and Roy Strong described these interiors as “a striking exposition of Caroline political and religious ideals… the climax asserts a new ideology: above the royal palace hover divine Ideas, animating prerogative rule”. Echoing this view, Hamlett explores parallels between these works and Thomas Carew’s masque Coelum Britannicum. Such interiors, it is argued, provided an active link with “contemporaneous immersive experiences of masque, drama and opera”. 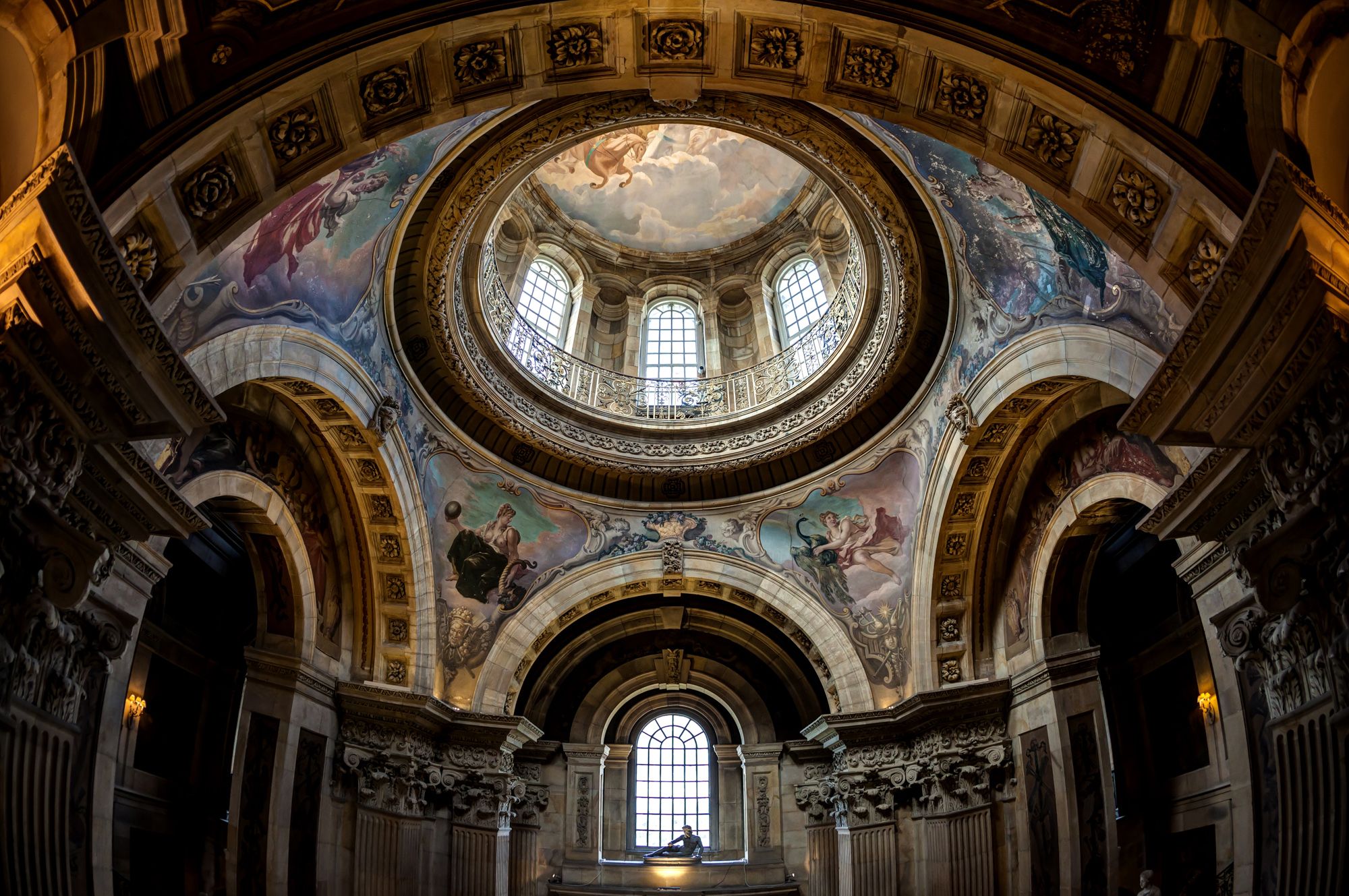 The Great Dome in Castle Howard © Chris Geatch via Flickr

In her analysis of painted interiors at Boughton, Chatsworth, Burghley, Castle Howard, Powis Castle, Charborough, Hanbury Hall, Petworth and Blenheim, Hamlett explores the animation of architectural space through the ingenious re-interpretation of engraved continental sources in scenographic painted form—“the animated wall” was exactly how one contemporary poet described a staircase by Thornhill. This is paralleled by the animation of classical literature, especially Ovid’s Metamorphoses. Nowhere are his transformative mythological themes more vividly rendered than at John Vanbrugh’s Castle Howard, where the murals conjure up a vision of the Palace of the Sun, as described in Book II.

Most leading mural artists turned ‘patrons into gods, the actual walls of their houses into imaginary landscapes and their ceilings into heavenly vaults’

Drawing on Ovid’s mythologies, most leading mural artists turned “patrons into gods, the actual walls of their houses into imaginary landscapes and their ceilings into heavenly vaults”. In the Heaven Room at Burghley, Verrio’s 1690s interior triumphantly creates an architectural illusion filled with heavenly bodies that overwhelm the viewer like few other British interiors.

Thomas Tickell wrote of spectators gazing at the (now lost) 1690s murals at Lowther Castle, believing they breathe Elysian air because “With strokes so bold, great Verrio’s hand has drawn/The gods in dwellings brighter than their own”—such murals seem to have been intended to brighten great mansions with a god-like aura.

This study is rich in new methods of looking and understanding, and of imagining and re-conjuring the impact of these murals in the time of their production. The author explores political and philosophical content as well as their multi-layered aesthetic potency. The publication’s austerity in terms of illustrations—mostly black and white, with just 24 colour plates—leaves Hamlett an opening for a follow-on study in full colour and a larger format to communicate the impact and quality she establishes so effectively here.