Great Apes: when Planet of the Apes meets a White Cube opening 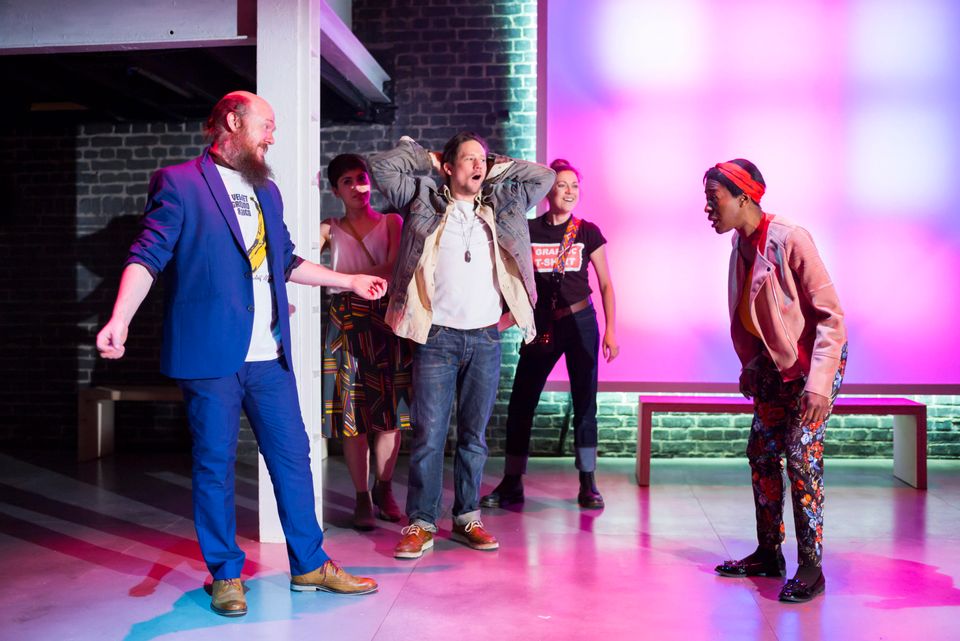 The art world is a zoo in the play Great Apes

Apish critics, chins in hands, give their low-browed views of high art. An Uzbek chimpanzee billionaire, with a child bride and flanked by two security chimps, buys out an entire exhibition, where the work includes graphic visions of illiterate humans. A gallerist fights with a churlish chimp critic in an explosion of grunts and grabs. In Great Apes, a theatrical adaptation by the critic Patrick Marmion of Will Self’s 1997 novel now at the Arcola Theatre in London (until 21 April), it is as if Planet of the Apes took place during an opening at White Cube.

The play opens with the Turner Prize-winning artist Simon Dykes launching on a coke-and-ecstasy-fuelled binge that puts him in a mental hospital. He wakes to a world turned on its head, where “chimpunity” rules. The denizens of the London art scene have turned into chimpanzees—and so have the nurses and psychiatrists treating the artist for the delusion that he is a human.

The simian satire takes brutal aim at contemporary art. The author Self met the artist Damien Hirst in 1994, the heyday of the YBA movement, and by his own account “knocked about with him a bit”. Self continues to be an admirer of Hirst but has written off much of contemporary art as “overvalued tosh and useless ephemera” aimed at the likes of Russian oligarchs who “buy artworks by the metric tonne and plaster them on the walls of their vulgar houses”.

In the play, Dykes’s work at Tate Modern involves thousands of teddy bears, while a fellow artist is working on a 500-foot spider’s web made from recycled chewing gum. “Contemporary art is shit,” a drunk chimp critic yells at Dykes. “Your work is the worst of the shit.”

Great Apes fires off a terrific first act—the actors trained with a leading chimpanzee expert to perfect their grunts, shrieks, grooming habits and a loping pace that makes their aping more than convincing. In the second, the play seems uncertain of its direction. But it makes for viciously literate satire and scenes of dark and delicious mayhem, where art leads into a mental wilderness of mirrors.