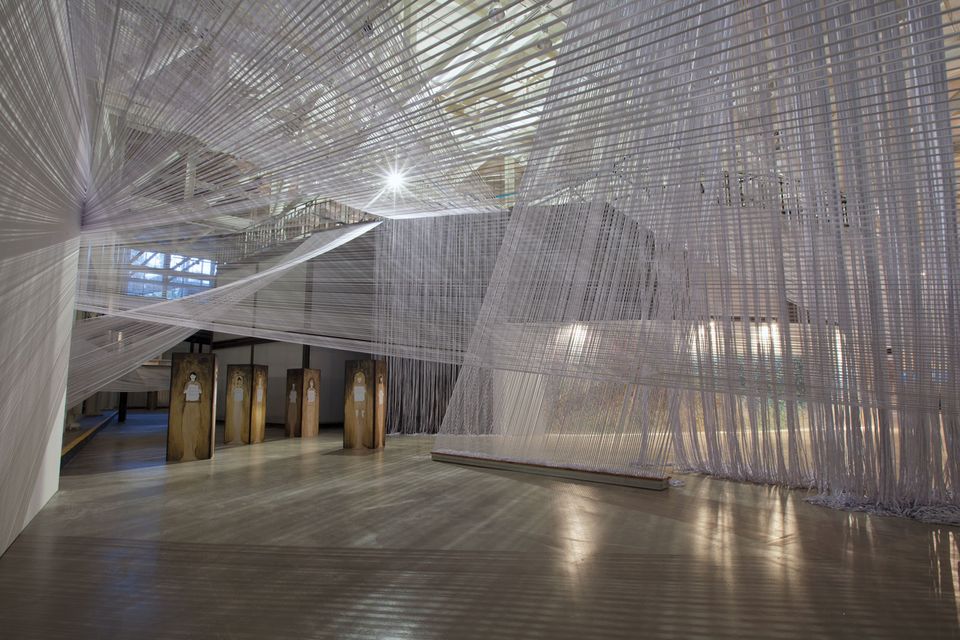 Democracies like to remember. South Korea needs to remember. While many of its more politically cosseted East Asian nations shroud their art and societies in convenient amnesia and relentlessly rosy visions of the future, South Korea is obsessed with remembrance. This year's Gwangju Biennale (until 11 November), the 12th since its foundation in 1995 to commemorate the 1980 slaughter of demonstrators that sparked South Korea's democratic transition in 1987, doubles down on revisiting both of those watershed years. Despite the regionally rare success of its democratisation, South Korea's memory is more melancholic than triumphant, with the spectre of North Korea less a terror of imminent annihilation than mourning for being half a country, like missing a phantom limb. The theme of Imagined Borders addresses directly that fraught relationship with the North, recently stretched to new extremes of both possible threat and reconciliation, as well as extending to global tensions surrounding migration and identity.

"In the case of South Korea, ever since the peninsular division and the Armistice Treaty of 1953, war has technically never ended. Having lived in constant state of fear of another violent outbreak of war, Koreans have systematically attempted to forget this reality. In addition to recognising the various forms of borders, this year’s biennial also brings to attention the role of remembrance, which is inherently political," says Sunjung Kim, the president of the Gwangju Bienniale Foundation. "If the rapid development of Asia hid or erased its own past, this year’s Gwangju Biennale attempts to reveal trauma, memories and histories purposefully or inadvertently forgotten throughout a process of exponential modernisation. It also reminds the viewer that the act of forgetting and remembering can simultaneously form and break down barriers—psychological, emotional, and perhaps even physical."

A staggering 11 curators have contributed their perspectives to this theme, featuring works that address "political, social, and emotional borders both physical and invisible," Kim says. "Amongst these various thematic structures, the exhibition highlights issues of building the nation in the 60's and 70's, as well as the rise of migration and refugees due to strengthened borders, resulting from the concept of the nation-state after globalisation. Furthermore, Korea’s history of division, the collective memory of the democratic movement in Gwangju, and the protest against dictatorship across Asia have also informed the site-specificity of the exhibition."

The seven sections organised by those 11 curators over multiple venues create an exhibition that is as ambitious, imprecise and compelling as the theme itself. The Gwangju Biennale Exhibition Hall contains four comparatively global presentations: Imagined Nations/Modern Utopias, about modernism in the global South of the 1950s to 1970s; Facing Phantom Borders, about Southeast Asian geopolitics; The Ends, exploring "post-internet" boundaries; and Returns, on Asian biennale and art history. This instalment sees the first time the city's Asia Cultural Centre as a main venue since its opening in November 2015, hosting the sections of Faultlines, about identity, Gwangju's political violence in The Art of Survival, and North Korean ink wash art Chosonhwa. 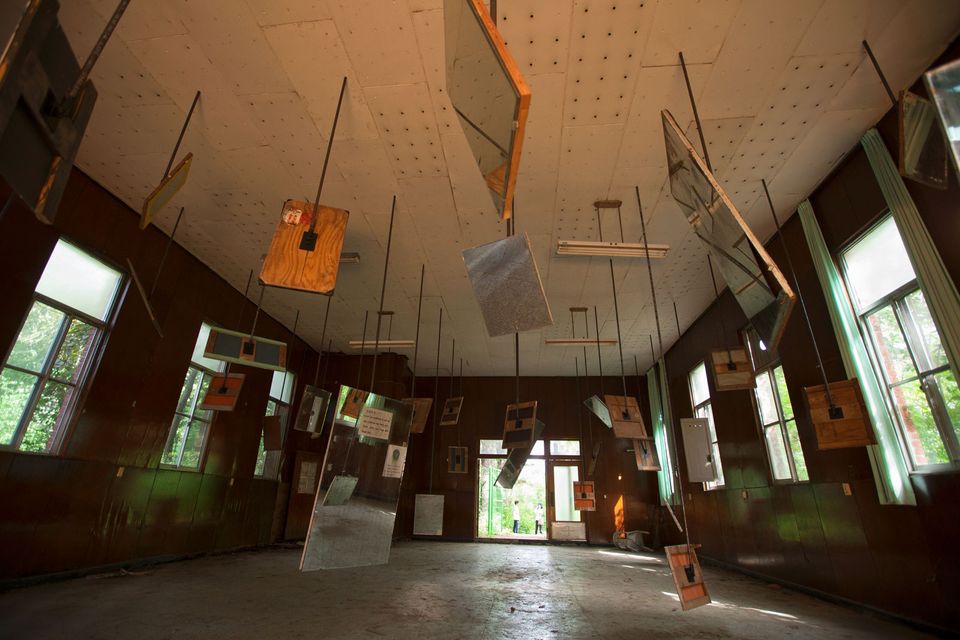 Mike Nelson's Mirror reverb (the blinding of a building, a notation for another) features a hospital's bathroom mirrors hung in a chapel Courtesy of the artist, 303 Gallery, Galleria Franco Noero, Matt’s Gallery, neugerriemschneider, and Gwangju Biennale Foundation

Additionally, the derelict Former Armed Forces’ Gwangju Hospital and nearby chapel, situated within a memorial park, present site-specific commissions. Apichatpong Weerasethaku's installation Constellations, ghostly movements in the public spaces of the decaying hospital, was still being installed at the time of the opening. Mike Nelson's Mirror reverb (the blinding of a building, a notation for another) consists of time-worn bathroom mirrors, emblazoned with hygienic and sometimes political exhortations, removed from the hospital and hung at varying angles around the small abandoned chapel's theatre-like hall, creating a literal temple of reflection. 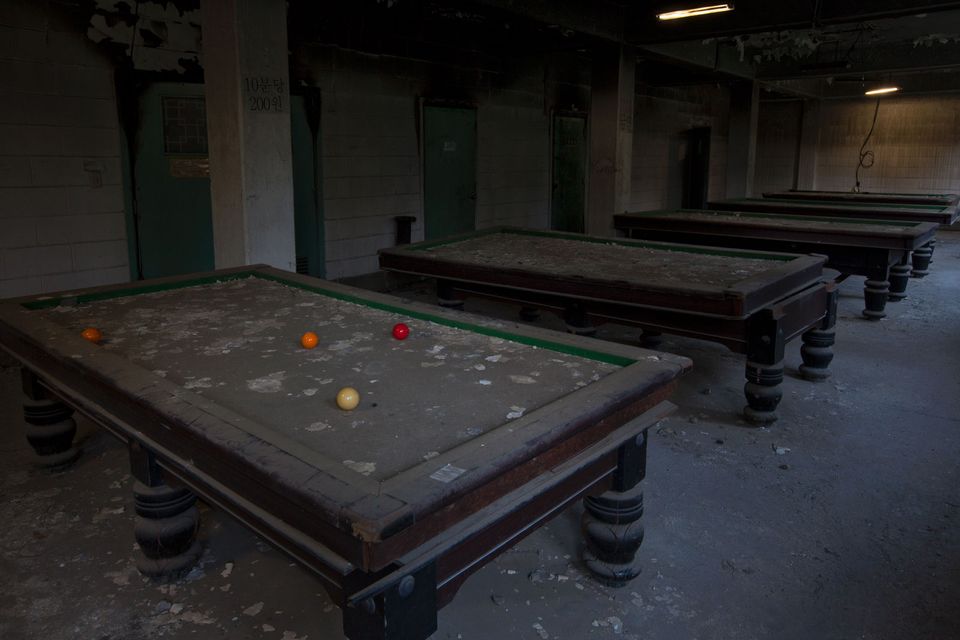 Though both venues were selected to highlight their connection to the Gwangju Uprising of 18 to 27 May, 1980, they also strike a nerve that is still raw in Gwangju. The Military Hospital is near the barricades where Chun Doo-hwan's military shot and beat unarmed student protesters. The ACC is built upon the site of the former South Jeolla Provincial Office, where uprising leaders were executed. The building's design, by Korean-American architect Woo Kyu-sung, sinks the exhibition galleries into the ground while preserving the site of the clashes. In late June, according to Korean website Newsis, a group of seven mothers of the victims of 5.18 protested the delayed restoration of the site by publicly cutting their hair.

"The original architectural plan of the ACC was to demolish all buildings related to the May 18th Democratisation Movement at the current site of ACC," Sunjung Kim says. "However, through continued protest, the Cultural Exchange building was kept but there had been controversy due to an inadequate remodelling process. The Former Armed Forces Gwangju Hospital was also about to be refurbished into a trauma centre. In light of this, various groups related to the May 18th Democratisation Movement have continually protested against acts that might erase the traces of history embedded in its architecture. Local groups had feared that Gwangju Biennale may also contribute to this erasure, but the Gwangju Biennale Foundation explained that this was far from the intention. A part of the discussion was to explain that artists would engage with the events that had taken place in the past through their work in these buildings, not to partake in a systematic washing of them. The spirit of democracy and protest in Gwangju is significant to the foundation of the biennial, as is the social, political and emotional history of the city.

Kim defends the all-male, none Korean, contributors to the commissions section as resulting from a thorough board review. "As the GB Commissions project aimed to bring a fresh perspective through site-specific work based on research on the area, the selection criteria also took into consideration the artist’s understanding of Gwangju and South Korea specifically. The Committee found that Mike Nelson and Apichatpong Weerasethakul’s visits to Gwangju, and Adrián Villar Rojas’s long-term research in the DMZ area had prepared them well to create works that would truly engage with buildings ridden with history and violence. The Committee also found that Kader Attia’s engagement with trauma in his works were thematically fitting with the site-specificity of the hospital building."

She stresses that Korean artists get full exposure in other sections, representing 40 of the 165 artists from 43 countries in this year's event. For example, Art of Survival presses into the region's historical scars of war, occupation, dictatorship, revolution and division starting from the Gwangju Uprising. It is not a criticism to say that MongJoo Son's beautiful bed of traditional motifs projected onto barbed wire Crazy Bright Ballad is among the most subtle works. Paintings of protests and documentations of Japanese "comfort women" and modern sex trafficking are flanked by the Manjang flags flown during the Anti-Biennale held in 1995 in criticism of the first Gwangju Biennale. "Kang Yeongyun, one of its lead organisers of the Anti-Biennale, argued that the official Biennale was a state-led project that did not respect or understand the political and civil history of Gwangju. Fittingly, the Anti-Biennale opened at the Mangwol-dong Cemetery honoring the victims of the Democratic Uprising, presenting about 1200 manjang banners produced by artists from all around the country," Kim recalls. Other works from 1995 presented again include Cuban artist Kcho's boat adrift on beer bottles Para Olvidar, meaning to forget. The work was created in 1994 about the Balsero Exodus in which over 30,000 Cubans in one month set sail on rickety crafts for the US. Forgotten or remembered, it suggests, history seems doomed to repeat.