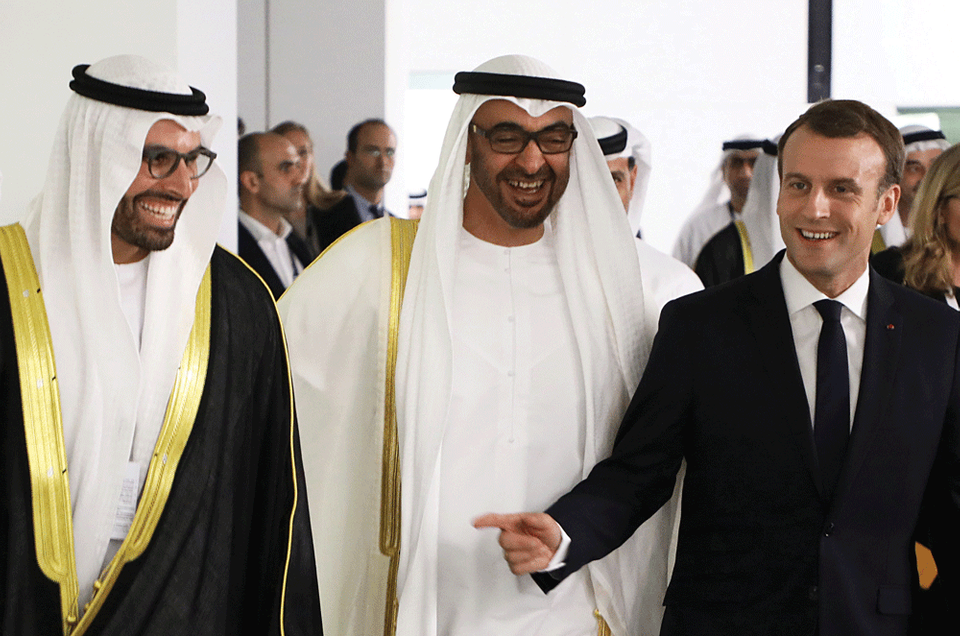 This is not a book in praise of the Gulf museums—the Louvre Abu Dhabi, which opened this month, or the Museum of Islamic Art in Doha, open since 2008. It sees them rather as the means and expression of the concentration of power in the hands of the tribal rulers of their respective emirates (hence the title), and the disempowerment of the old middle classes—the merchants and civil servants.

Alexandre Kazerouni, a French academic of Iranian origin (note the choice of “Persian Gulf” instead of “Arabian Gulf” in the title), has over the last decade been back and forth, looking behind the bland press releases and the chronic secretiveness of these rich, tribal states whose international prestige has risen as the rest of the Middle East has sunk into chaos, to deconstruct the intentions and power play behind these huge cultural projects.

Le miroir des cheikhs is the result. It does not consider whether the museums are beautiful or might have an educational and mind-broadening effect because he believes there is an almost complete disconnection between them and the indigenous population. In this, I believe he is wrong, at least in the case of the United Arab Emirates (UAE), because the art events on Saadiyat Island over the last decade have become genuinely popular with Emiratis. But whether or not one agrees with his essentially hostile opinions, the book is full of fascinating information on the class, tribal and national politics of the Gulf and on who is really pulling the strings and why.

It has been nearly 13 years from the Louvre Abu Dhabi’s conception to its ceremonial opening as the Arab world’s first universal museum. From the first, it has been a matter of high state. France’s president, Emmanuel Macron, is reaping the prestige of a project that was furthered in 2005 by the French foreign ministry under President Jacques Chirac but was initiated in 2004, not by the French, but by the UAE’s then minister of information and culture, now foreign minister, Sheikh Abdullah bin Zayed Al Nahyan, and his older brother, Sheikh Mohammed bin Zayed Al Nahyan, the Crown Prince of Abu Dhabi, the head of the armed forces and now the most powerful man in the emirate’s government. 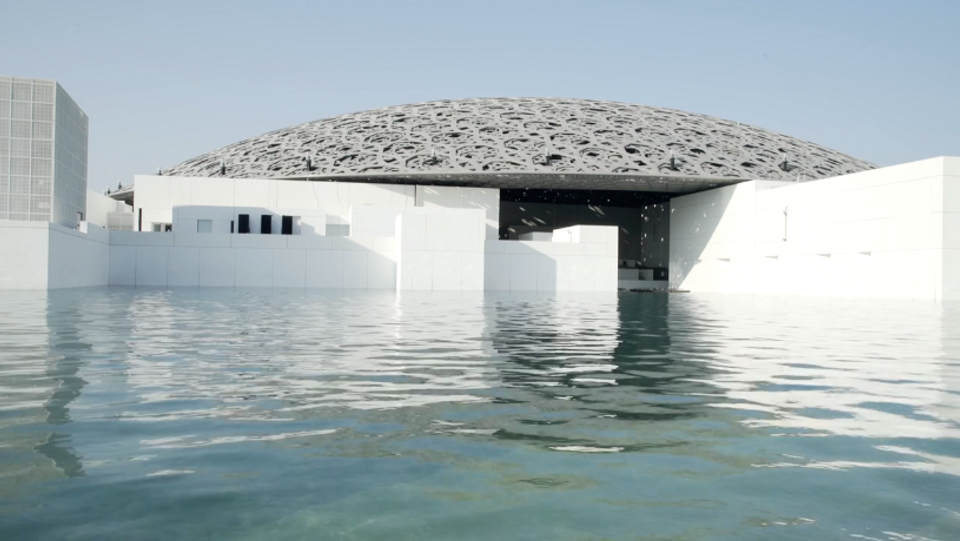 At the origin of Sheikh Mohammed bin Zayed’s capacity to pay for the museum planned for Saadiyat Island are the funds of the Offset Program Bureau (OPB), set up in 1992 to administer the sums that foreign governments are obliged to invest in the UAE when they sell it arms. This “financial niche” was given to Sheikh Mohammed by his father, the founder of the UAE, Sheikh Zayed bin Sultan Al Nahyan, before he died in 2004.

In 2008, at the opening of the exhibition Picasso Abu Dhabi, the director-general of the fund, Khaldoon Khalifa Al Mubarak, reminded the public of its commitment to the arts: “Mubadala is engaged in the diversification of the economy of Abu Dhabi and the creation of a flourishing society. We believe that supporting the arts and culture is an important part of this process.”

Kazerouni says that with the 2009 crisis, the Abu Dhabi Tourism Authority (ADTA) sold part of its shares in the Tourism & Development Investment Company (TDIC), which was developing Saadiyat Island and the museums, to Mubadala. The flow of money from the Offset Funds to the museums via Mubadala has, therefore, been an act of patronage deriving from the arms purchases by the UAE. The two universities, Sorbonne Abu Dhabi and New York University Abu Dhabi, and Masdar, the unfinished eco-city, are also financed out of Mubadala, which has a current asset value of $125bn.

Meanwhile, in the separate Gulf state of Qatar, the Museum of Islamic Art (MIA), designed by the Chinese-American architect I.M. Pei, was going up, and a plethora of other museums and cultural organisations were announced for its capital, Doha.

Kazerouni’s overarching theses are, first, that these museums are the result of the two emirates’ increasingly westward-looking policies, and, second, that they have led to a more or less intentional marginalisation of the indigenous middle classes. He has coined the term “rooted museums”, for the archaeological and historical museums created in the 1970s and 1980s by the middle classes, and “mirror museums” for the grand, international institutions of the 2000s.

In the case of Qatar, the MIA is both physically and ideologically opposite the Islamic Cultural Center. This is an outpost of Saudi Salafism, the strictest form of Islam, which the Kingdom has been exporting since the 1950s, while MIA is a Western-style museum of the finest “Islamic” works that the Western market could supply in the first decade of the 2000s, curated by Westerners or in the Western manner, and placed in the cosy category of “art”. It was conceived around 1996 by the then emir, Sheikh Hamad bin Khalifa Al Thani, as an antidote to the growing Salafism in Qatar, as a symbol of his and his emirate’s prestige, and even, suggests Kazerouni, to persuade the Fédération Internationale de Football Association (FIFA) committee that Qatar was a suitably cultivated place to host the 2022 World Cup.

In this he was supported by his glamorous, liberal-minded wife, Sheikha Mozah, and their daughter Sheikha Mayassa (under the influence of her husband, Sheikh Jassim bin Abdulaziz Al Thani, who is the real enthusiast for contemporary art, Kazerouni says), although the person actually responsible for MIA’s collection was his cousin, the extraordinarily gifted collector Sheikh Saud bin Mohammed Al Thani. He has almost been written out of the public story because he fell from grace over financial irregularities, which of themselves might not have been fatal, says Kazerouni, had he not made enemies in and outside the Gulf by rejecting a large (unnamed) collection of Islamic art that was unsuccessfully offered to Libya, Qatar and Abu Dhabi, on the grounds that it was of very mixed quality.

Kazerouni contends that the deposition of the Shah in 1979 by the religious middle classes of Tehran had made the sheikhs begin to look with suspicion on their own wealthy, patrician merchants and start nudging them out of positions of power. He goes on to date the interest of the ruling class in dominating cultural matters back to the first Gulf war, in 1990, when they saw how emotionally the West reacted to the burning of the Kuwait National Museum by Saddam Hussein.

Then came the Arab Spring in 2011, with its clamour for democracy, and this not only confirmed the sheikhs’ desire to keep the museum projects within their own families, but, according to Kazerouni, actually changed the Louvre Abu Dhabi’s intellectual programme from a universal museum based on the Enlightenment ideas that eventually culminated in democracy to a safer, anthropological one emphasising the common behaviour patterns of humanity. While he is right in saying that the creators of the Louvre Abu Dhabi and its collections have almost exclusively been French, he goes too far in seeing its employment of young, upper-class Emirati women as proof of a desire to suppress the established bureaucracy—a quick glance at the cultural field in the West shows a plethora of privileged women there too. This book is definitely worth reading, but with caution, because Kazerouni does not prove his most damning conclusion, which is that the grand museums of the Gulf represent the ruins of the modern state in favour of authoritarianism. To do so, he would have had to show that the same process was taking place in the more important ministries, such as health, education and social services, and this he has not done.

Over the centuries, culture has always been a peculiarity in politics, the plaything of the powerful; it is no surprise to see the same happening in the Gulf with the second generation of rulers to come to power after their nations were born.