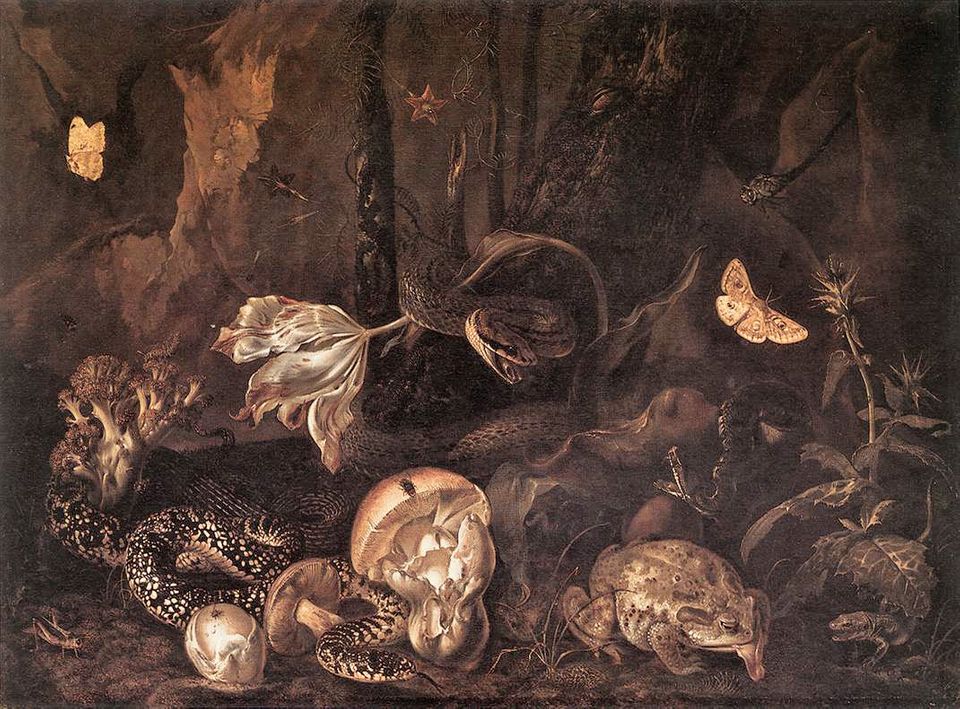 … you’re sure of a big surprise: Otto Marseus van Schrieck, Still-Life with Insects, Amphibians, and Reptiles (1662) Courtesy of the Herzog Anton Ulrich-Museum, Braunschweig

Appearing in a bumper year for books about art and artists engaged with science, notably Maria Sibylla Merian and the naturalia pictures in Cassiano dal Pozzo’s Paper Museum, this splendid work introduces Amsterdam painter Otto Marseus van Schrieck (around 1620–78), the inventor of the “forest floor” still-life, a genre known in Italian as the sottobosco. Published to accompany an exhibition at the Staatliches Museum Schwerin and Rijksmuseum Enschede, Medusa’s Menagerie is the first to consider Van Schrieck as part of an “international republic of scholars” and scientifically minded artists and collectors, including Pozzo (for whom he painted) and Merian.

Maria Sibylla Merian is celebrated for her caterpillars and butterflies; Van Schrieck, an equally distinguished butterfly painter, preferred toads, lizards and snakes. In fact, this voracious reptile hunter earned the sobriquet “Snuffelaer” (snuffler) because of the time he spent sniffing around in the undergrowth looking for his beloved models, allegedly even subjecting them to his kisses. And they loved him back: the denizens of his personal menagerie at his modest country house outside Amsterdam’s St Anthony Gate – he called “the land of snakes” – would even hold a pose, patiently wrapped around his maulstick (resulting in the coiling figura serpentinata in his paintings). His snake pictures depict a wondrous world of decay and slime, rife with mushrooms, beetles, and chameleons interacting with the liveliness of a history painting – a far from peaceable kingdom in nature’s underworld. What makes them unique is their toad’s-eye point of view at the mossy base of a tree with perhaps a thistle or some swamp grass as a frame. He captured the texture of his bryophytes by applying real moss to the pigment and (less happily) pressed butterfly wings onto the paint to record the patterns of their scales.

The catalogue’s four essays and 36 mini-essays contextualise Van Schrieck within the artistic and scientific communities of his day, capturing the intersection of art, science and the occult when the boundary between them was still porous, and rehabilitating him as a man of science rather than a mere “curiosity”. Their task is not difficult because their subject was prescient in his passion for accuracy and empiricism (he used a microscope, rare at the time), and he collaborated with scientists in one of Europe’s leading intellectual centres. However, his scholarly side did not keep him from painting fantastical landscapes with improbable plants such as tulips or morning glories in which snakes (which eat only worms, insects, slugs, snails, reptiles or amphibians) lustily hunt butterflies and toads and chameleons play tug of war with moths (Merian was equally guilty of romanticising her caterpillar pictures). Van Schrieck also chose subjects with resonated with ancient concepts such as the four elements and the psychomachia (battle of vice and virtue), and with alchemy and the Bible.

Van Schrieck was the darling of the Amsterdam scientific community and his snake pit and studio were regular stops on the northern artistic Grand Tour. Eminent visitors included French physicist Balthasar de Monconys, who preferred his work to that of Vermeer, whom he had met days earlier. However, his most enthusiastic visitor was the future Grand Duke Cosimo III de’ Medici. His keenness for the artist derived from a deep-rooted Medici penchant for snakes and poison, both as tool of courtly intrigue and as the source of antidotes, including an occult panacea called theriac made of the ashes of thousands of vipers. Van Schrieck’s herpetological leanings made him one of the most popular northerners in the grand ducal collections, and today the largest collection of his paintings resides in Florence.

Van Schrieck enjoyed a more scientific relationship with the Dutch entomologist Johannes Swammerdam, famously correcting his miscalculation that wasps emerging from caterpillars were the product of spontaneous generation from rotting matter and not parasitical eggs. But we do not need science’s imprimatur to restore van Schrieck’s reputation: this exhibition handily demonstrates his extraordinary skills as a painter. Van Schrieck created innovative long perspectives with light and shade and was precociously skilled at depicting scaly snakeskin, shiny beetle shells, oleaginous toad tongues and decay in all its glory, his colours glowing with an intensity which might mislead the viewer into thinking that it was he, and not Merian, who had visited the jungles of Suriname.

• Gauvin Alexander Bailey is the Professor and Bader Chair in Southern Baroque Art at Queen’s University, Kingston, Canada and the author of The Palace of Sans-Souci in Milot, Haiti (2018), The Spiritual Rococo (2014) and of Baroque and Rococo (2012)

Appeared in The Art Newspaper, 303 July/August 2018
More ReviewTopicsReviewHollandScience and Art