New Orientalists: a thoughtful book on the rise and decline of Western artists in the Middle East

There is plenty to enjoy in this account of a group of travelling painters who were not only accomplished but also determined, brave and hardy 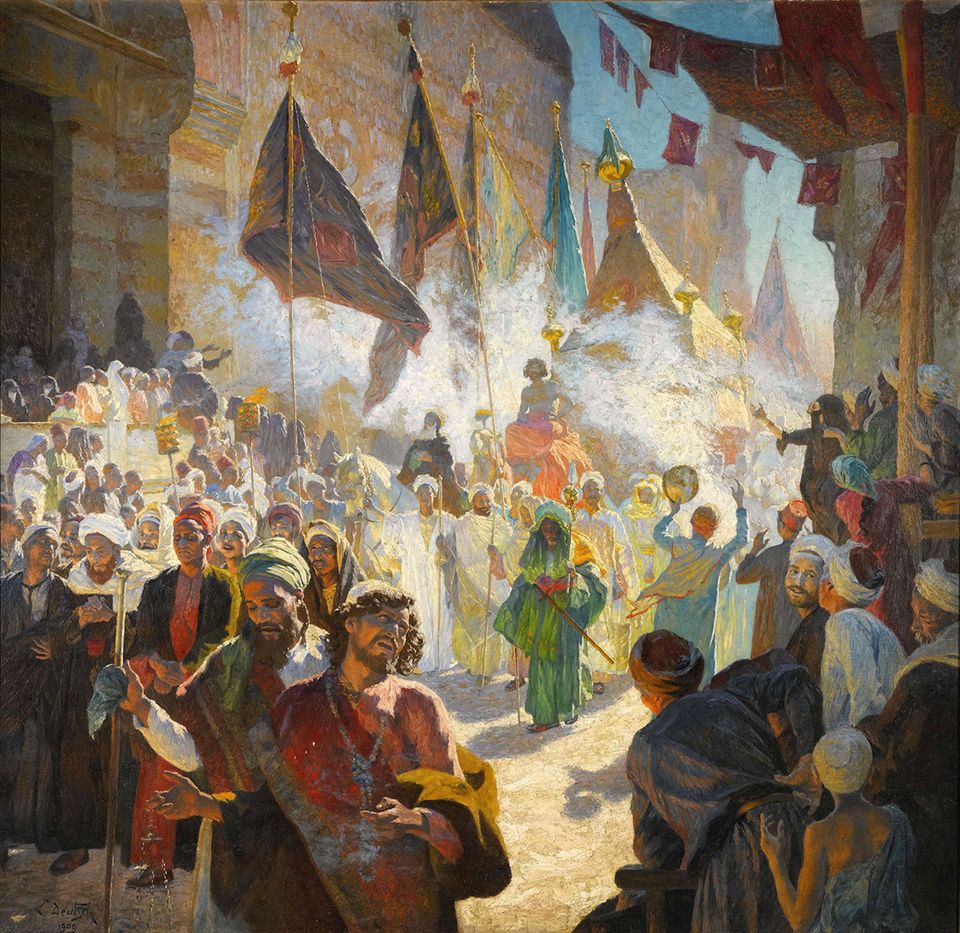 First, with respect to the period covered by James Parry’s Orientalist Lives, it makes good sense to have a book about Orientalist painters start in the 1830s. This was the decade in which the introduction of screw-propeller-driven steamships made crossing the Mediterranean so much swifter and easier. Mediterranean quarantine restrictions were eased. John Murray started issuing travel guides to Egypt and the Holy Land. The European consular presence in the Levant increased. Daguerre’s photographic technique was announced in August 1839 and a few months later a photograph was taken of the Khedive Muhammad Ali’s palace in Alexandria. Just a little later yet, in 1841, the introduction of oil paint in tubes made painting out of doors much easier (though sand and dust still made oil painting in Arab lands pretty difficult and most artists preferred to return to Europe and work from sketches, watercolours and photographs). Among the painters, Charles Gleyre was in Egypt in 1834-35, Willian Müller was in Egypt in 1838-39, Horace Vernet in Algeria in the 1830s, and William Allen in Morocco and Turkey in the 1830s. They were the harbingers of the numerous artists who travelled out in the decades that immediately followed.

The reason for choosing 1920 as the notional cut-off point is not so clear. In the wake of the First World War, the Ottoman Empire was being dismantled and much of the Arab lands were being shared out between Britain and France. But by then the heyday of Orientalist painting was long past. As early as 1857, Jules-Antoine Castagnary denounced the genre as “unpatriotic… [and] guilty of a failure to believe in the beauty of France and its people” (a charge that was later to be echoed by Cézanne). In 1859, John Ruskin, who had previously been the leading champion of the works of John Frederick Lewis, declared that he was now bored by so many paintings of Arabs and camels. The formation of a Société des Peintres Orientalistes Français in 1893 must be seen not as a confirmation of the high status of Orientalist painting, but rather as a last-ditch defence of a genre that had become unfashionable. Some artists, including Gustav Bauernfeind and Frederick Goodall, were ruined by the fin-de-siècle change in taste.

The grandest and most influential of the Orientalist painters, Jean-Léon Gérôme, led ill-judged attacks on the newly fashionable Impressionist movement. The irony is that, Cézanne notwithstanding, many of the Impressionists were admirers of Orientalist painting, and Renoir, like Gérôme, had studied in Gleyre’s studio. As Parry notes, many of the Impressionists “held Delacroix in high esteem and expeditions to North Africa were still an artistic rite of passage for artists such as Renoir, who went on to produce his own interpretation of the odalisque theme”. (Matisse would do the same.) Uniquely, the Orientalist painter Ludwig Deutsch would eventually abandon his characteristically Orientalist high-gloss, mock-realist style in favour of something looser and closer to Post-Impressionism, most strikingly in The Procession of the Mahmal through the Streets of Cairo (1909).

Orientalist Lives provides a most useful guide for anyone setting out to be an Orientalist painter in the 19th-century Middle East. Lady Francis Egerton’s Journal of a Tour in the Holy Land (1841) produced a valuable list of the things those heading out to Palestine should take with them:

Parry’s account of Orientalist art is weighted towards how the painters’ work was done, how the travel was managed, how suspicious natives were appeased, and how the painters’ work was marketed in salons and galleries. But the early chapters draw heavily on the testimonies of travellers in the Middle East who were not painters: Egerton, Lady Mary Wortley Montagu, Florence Nightingale, Edward William Lane, Julia Pardoe and Gustave Flaubert among others. But then, in the later chapters, Parry focuses more closely on the problems and opportunities of the painters.

The publication of Orientalist Lives has been supported by the Shafik Gabr Foundation, and Gabr, an Egyptian businessman and enlightened art collector, has contributed a thoughtful foreword. The book’s illustrations draw on the Shafik Gabr Collection and 32 of its 110 images come from it. Gérôme and his students, Ludwig Deutsch and Rudolf Ernst, feature prominently in the collection and the book. Parry writes well about the way they worked and “the jewel-like quality that was striven for by many Orientalist artists and so admired by their clients and audiences. It traditionally relied on precise brushstrokes to create an intensity of saturated colour and a burnished effect…”. The “licked-finish” paintwork simulated the appearance of brilliantly coloured photographs, but this kind of “realism” was more often than not delusive, as the images relied heavily on the somewhat arbitrary deployment of staffage (accessory items in a painting). Orientalist painters, besides sketching and photographing abroad, were also assiduous in collecting costumes, armour, weapons, ceramics, inlaid furniture, lamps and all manner of oriental bric-à-brac.

Orientalist Lives provides a sympathetic account of a large group of painters who were determined, brave and hardy, as well as aesthetically sophisticated and technically accomplished. Parry’s book offers much to think about and to delight the eye. The appendices serve as most useful guides—first, to who was who, and then, to who went where, when.

• Robert Irwin is the Middle East and Islam editor at the Times Literary Supplement. His book, Ibn Khaldun, An Intellectual Biography, was published by Princeton University Press in 2018