Jasper Johns’s latest work is unmistakably his own, transmitting traces of the past

From the very first painting in his show at Matthew Marks Gallery, visitors will find familiar themes 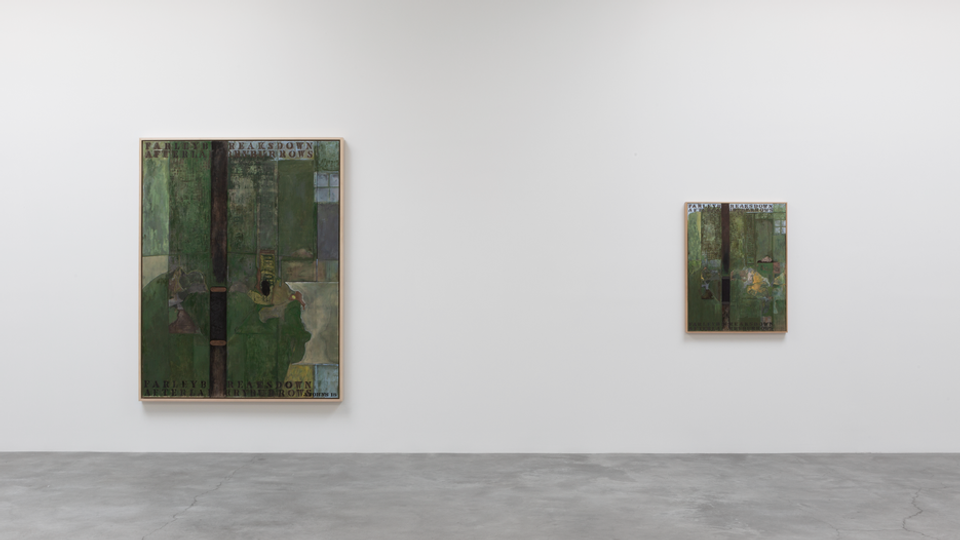 At 88, Jasper Johns continues to generate paintings, drawings and other graphic works that in manner and concept only he could have produced. A small untitled 2016 painting in the artist’s current show (until 6 April) at Matthew Marks Gallery hangs alone, the sole work visible through the gallery's street-level windows, forewarning visitors of the scrutiny demanded and discoveries promised in the four rooms beyond.

A patient viewer will find in this first canvas a portrait, landscape, sky views and a trompe-l'oeil exercise combined. Two zeroes—recent additions to Johns's long line of “figures”—assert themselves as eyes fixed open, perhaps symbolising the unblinking witness of the psychoanalytic unconscious, or some nettlesome deity. I cannot imagine Johns accepting such symbolism, but I also cannot simply dismiss it. His art’s semiotic impaction has frequently provoked this sort of dilemma.

The zeroes can also read as the mouths of cannon, or by way of Picasso as nipples on bulging eyeballs that double as breasts. Their auras of white squiggles resemble lashes but could also comically suggest spermatozoa eager to fertilise observation. Meanwhile, each zero could also signal no one and nothing. 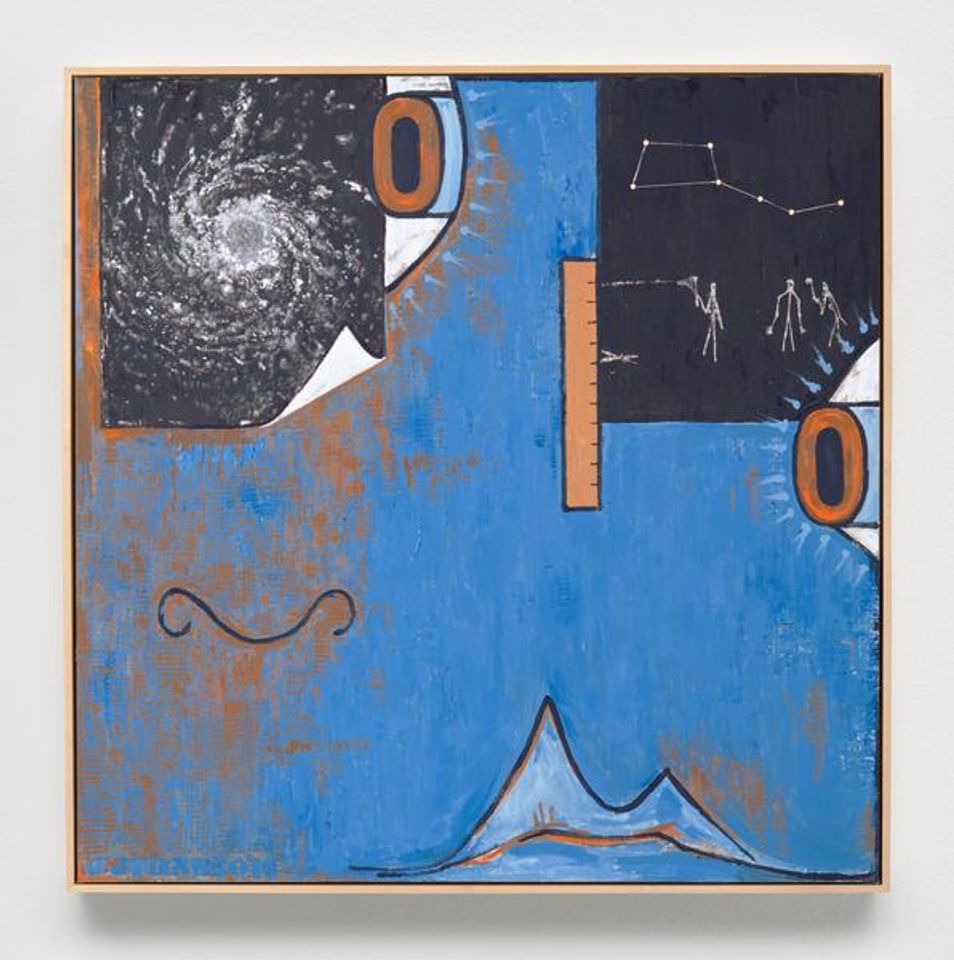 Below these elements on the painting's abraded sky-blue ground sit other symbols that regularly recur in Johns's earlier work: a curlicue sketch of a nose tip and nostrils and a mountainous stylised profile of lips, a memory echo of the artist’s step-grandmother, Montez Bramlett Johns, whose singing impressed him as a child.

Roughly bisecting the canvas vertically, a painted ruler appears, notched, but without numerals. At the upper right corner flicker white markings on a black ground that suggests both night sky and a blackboard. They cancel all sense of scale: a connect-the-dots Big Dipper hovers above tiny petroglyph-like scrawls that might be figures wielding… brushes? Semaphore flags? The upper left corner contains another scale-busting radiant galaxy spiraling in cosmic blackness, its rectangular ground tipped up at a bottom corner like a dog-eared page to remind us of the whole work’s pictorial artifice.

Visitors who know Johns’s work may be able to trace the ancestries for all these elements and may even read the untitled painting as a symbolic self-portrait. I count it as one more sortie in his long campaign to boggle description and thus defuse any possible climactic interpretation, started long ago with great concision in his American flag and target paintings of the 1950s.

Johns revisits this introductory image, rendering it even more diagrammatic than depictive, in later graphic works on view in the show: linocuts and an aquatint. He persists in redeploying the ingredients of his images and cycling through a range of techniques and materials to discover what differences such variations make. A number of pieces in the gallery show extend two series that Johns began a few years ago: Regrets is based on a photograph of a morose young Lucian Freud taken by John Deakin, and Farley Breaks Down is derived from a picture Johns traced by the war photographer Larry Burrows showing an American Vietnam combatant sobbing alone in a supply shed, following a mission that cost a comrade his life. In a 2018 oil painting, untitled but stenciled with “Farley Breaks Down, After Larry Burrows”, the image’s fracture into mirrored symmetry, its paint fretted by application through a screen, the seemingly arbitrary colour and deliquescent drawing, all serve to keep emotional content out of focus.

Other pieces in the show revisit motifs from Johns's famous mid-1980s project The Seasons. Like those paintings, whose compositions turn on a shadow silhouette of the artist—another deliberate borrowing from Picasso—these later works follow a theme of emotional shadows cast by memory and a morbid foreboding. Some of the most recent works on view—a suite of 24 drawings reminiscent of Edward Munch and James Ensor—similarly toy with skeleton imagery in comic confession of Johns's fear of death. 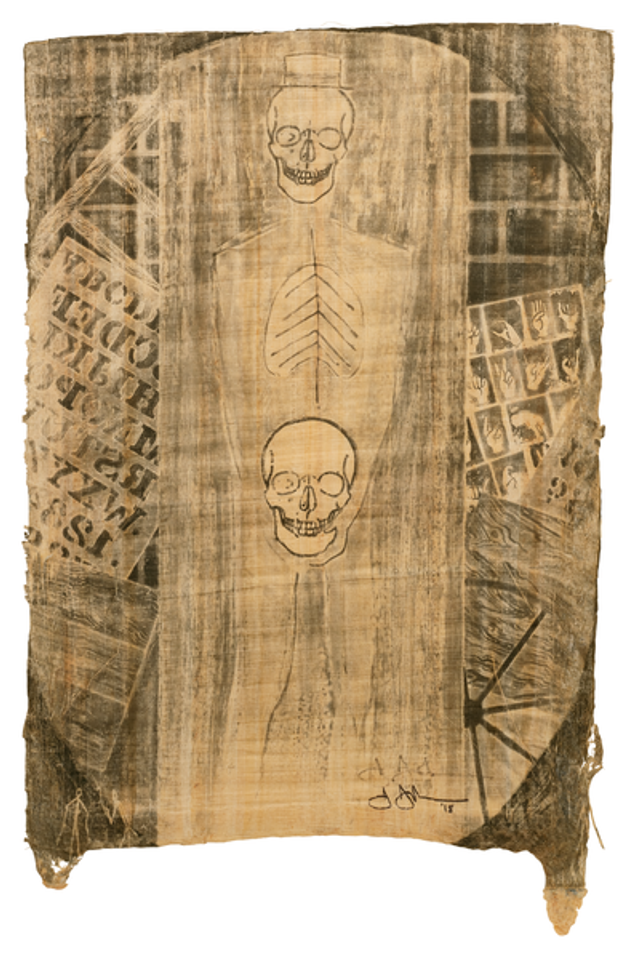 In 2020, the Whitney Museum of American Art and the Philadelphia Museum of Art will present, concurrently and collaboratively, a full career survey of Johns's art. Meanwhile, visitors to Marks's sampling of his recent work may wonder, as I do, whether it exemplifies the artist’s “late style”.

“This is the prerogative of late style,” the historian Edward Said wrote in a controversial 2004 essay on the subject. “[I]t has the power to render disenchantment and pleasure without resolving the contradiction between them. What holds them in tension, as equal forces straining in opposite directions, is the artist’s mature subjectivity, stripped of hubris and pomposity, unashamed either of its fallibility or of the modest assurance it has gained as a result of age and exile.” That fits. Sort of.