Let perception be your guide: how to see the Rococo

A virtual reality tour of an 18th-century German abbey 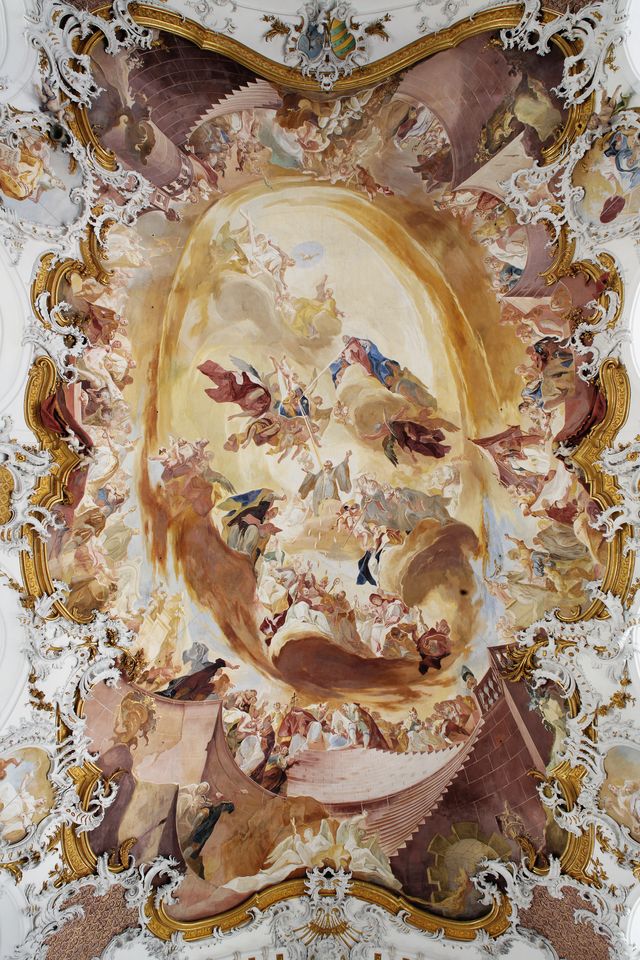 Franz Joseph Spiegler’s fresco, The Cult of the Holy Virgin Mary Spread by Our Holy Order across the Whole Globe (1751), in the former abbey church of Zwiefalten, Swabia, represents the subject’s patronage of the worldwide ministry of the Benedictine Order, as well as the role of images in their work. It is the unifying leitmotiv of the abbey’s extensive décor

Any aficionado of Germany’s Baroque and Rococo abbeys will be familiar with the tiny church guides (Kirchenführer) for sale next to the collection box and published by the likes of Josef Fink or Schnell & Steiner, with their gorgeous photographs, meticulous plans and precise, scholarly information for the visitor. The Swiss art historian Nicolaj van der Meulen’s colossal new monograph, Der Parergonale Raum: zum Verhältnis von Bild, Raum und Performanz in der Spätbarocken Benediktinerabtei Zwiefalten (The liminal space: the relationship between image, space and performance in the late Baroque Benedictine abbey of Zwiefalten), on the Benedictine abbey at Zwiefalten (1739-80), Baden-Württemberg, intentionally turns the traditional Kirchenführer on its head, and not simply by virtue of its heft.

Instead of approaching the church from a bird’s-eye view and leading the visitor, puppet-like, around it, he takes us deep inside and uses the visitor’s experiential journey as his starting point, focusing as much on movement and sensory perception—he calls it “perception-guided analysis”—as on history. And what a tour it is: Zwiefalten is arguably the most overwhelming church on the famed Oberschwäbische Barockstraße, the art-historical pilgrimage route between Lake Constance and Ulm. It is a testament to Van der Meulen’s conjuring skills that he is able to evoke its sensory overload so convincingly for the armchair traveller.

This is not to say that our journey is not carefully plotted out. The puppet-master is still fully in control—despite his claims to the contrary—but what he does is so new that the virtual visitor is happy to suspend belief and walk by his side. Richly illustrated with more than 350 mostly colour photographs of the highest quality (many by the author), this is the most complete immersion in a single building I have experienced without standing inside it. No view is overlooked: it lingers lovingly over every painting, confessional, altarpiece, cartouche and stucco scroll, and even provides diagrams of how to walk through spaces, whether real ones or those painted in Franz Joseph Spiegler’s titanic illusionistic ceiling frescoes. We are shown how to circumnavigate his vortex-like Mary Queen of All the Saints (1749) in the dome and how to project ourselves onto the vertiginous zigzags of his nave fresco, The Cult of the Holy Virgin Mary Spread by Our Holy Order across the Whole Globe (1751). It even features a diagram showing a visitor walking underneath that fresco with arrows pointing to parts of the ceiling that are keyed to photographs showing how perspectives change from different viewpoints. Throughout the book Van der Meulen relates the church’s sensory tricks to meditative manuals such as Peter Overadt’s Manuale Examinis Conscientiae (1610) or Antoine Sucquet’s Via vitae aeternae (1620); his own diagram fits well into that tradition.

The book takes us to every corner of the church, from the glittering gate that greets us upon entering to the choir, transepts, side chapels and beyond. We marvel at the paintings, sculptures, stuccoes and architecture of a team that included some of the biggest names of the day: Johann Michael Fischer, Spiegler, Meinrad von Au, Franz Sigrist, Johann Michael Feichtmayr and Johann Joseph Christian. A major theme is the idea of a fusion of religious and aesthetic experience, of the devotional practices of the pilgrim with the more profane musings of the connoisseur. Another is the peripatetic nature of looking at and encountering a building, a disjointed, constantly changing observation akin to what scholars of French Rococo call papillotage after the fluttering wings of a butterfly.

The book begins with a heading simply titled “Outdoors”, where we circumnavigate the church as participants in processions, pilgrimages and other rituals such as the 1659 translation of the corpse of Saint Exuperia the Martyr—one of several catacomb saints to take up residence in the church—to her new vitrine in the abbey. (In 1770 she would quite literally receive a facelift, her skull stuccoed over in a morbid makeover only possible in the German Rococo, looking like a Boucher shepherdess in an advanced state of putrefaction.) As with the 1685 translation of Saint Vitalis we are given a map to show where the processions walked, and the author illustrates other ephemeral events (such as a 1752 jubilee) using lively details from contemporary paintings.

The next heading, “Between”, takes us to the façade, which the author contextualises with an array of church fronts from central Europe to Italy. Again he pauses over details, showing us every angle of its curvilinear entablatures and bulging walls in a way that reminds me of Esther Dotson’s work on J. B. Fischer von Erlach. In fact, oblique angles are something of a leitmotiv; throughout the volume we are shown flattened-out cartouches and deflated shell-scrolls, leaving no perspective unobserved. If there ever is a church to reward careful looking, this is it; pulpits and picture frames dissolve into little dioramas of ruined temples, trees, grottoes, and figures; seaweed-like rocailles creep up over its paintings, which seem to respond by pulling back; and statues on the sides of altarpieces poke sceptres or fingers at their counterparts in the painting in an often witty dialogue between two- and three-dimensional realities. Zwiefalten has some of the most self-referential décor of any church in the world.

My one criticism concerns the author’s interpretive framework, which is based on a “difficult balance” between historical sources and post-structuralist writings by Derrida, Heidegger and Deleuze—theorists who provide, in the author’s opinion, “the Big Picture”. This shoehorning of 20th-century philosophy onto a book about the experiences of 18th-century visitors interferes with those experiences more than it elucidates them.

It is from Derrida’s notion of “parergon” or liminal space between interior and exterior that this book gets its unwieldy title—one that makes it seem more theoretical than it actually is—and paradoxically this reliance on these “contemporary” authors makes it seem retrograde in a way that a more thorough immersion in 18th-century sources would not have done. But ultimately this book is a splendid and painstakingly thorough immersion into one of the greatest monuments of international Baroque and Rococo, possibly the largest Kirchenführer ever written.

• Gauvin Alexander Bailey is the professor and Bader chair in southern Baroque art at Queen’s University, Kingston, Canada. His most recent publications include The Spiritual Rococo: Décor and Divinity from the Salons of Paris to the Missions of Paraguay (2014) and Baroque and Rococo (2012)