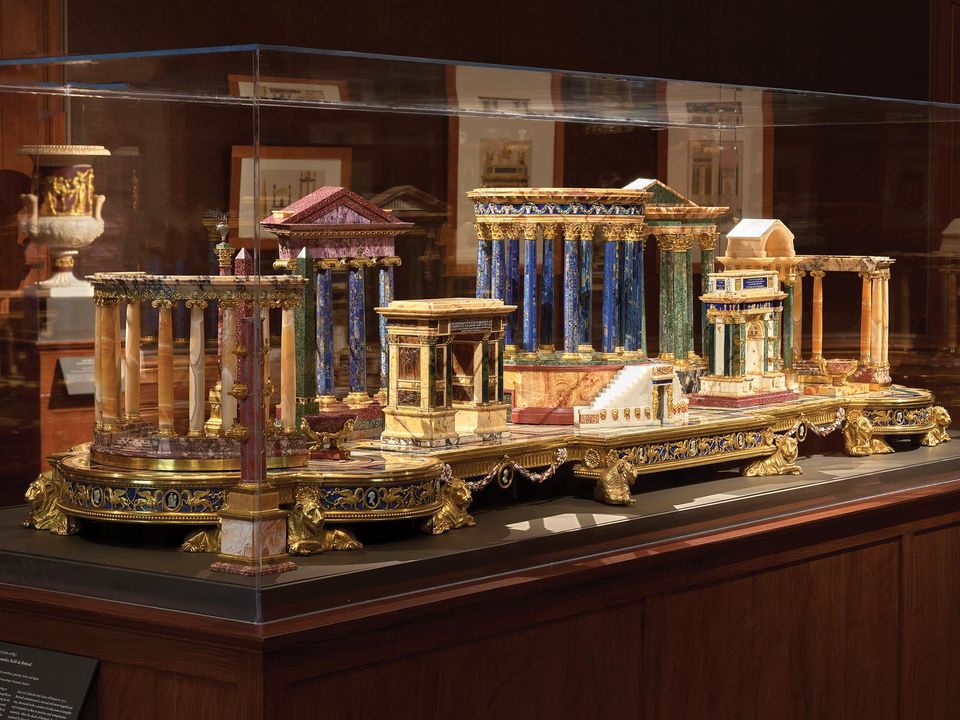 A deser, or table centre piece, made by Luigi Valadier for the Bailli de Breteuil, the French ambassador to the Knights of Malta (around 1778), now in the Prado Courtesy of the Frick Collection

In the prodigious (1,912 entries) catalogue of The Age of Neo-Classicism (1972), on whose Committee for the Applied Arts Alvar González-Palacios served, there were—frugal times—a mere 16 colour plates, one a Roman glass cameo of Bacchus and Ariadne mounted in the early 1780s by the goldsmith Luigi Valadier (1726-85), appointed by Pope Pius VI Braschi in 1779 to restore and mount the bronzes and cameos in the Vatican. This masterpiece, taken to Paris after the Treaty of Tolentino (1797), was in 1994 a star of an exhibition of the Louvre’s holding of Valadier, with a catalogue founded on González-Palacios’s contributions. It is again prominent in Luigi Valadier, published in association with a Frick Collection exhibition, a culmination of a half-century of research and publication by González-Palacios, including a 2015 catalogue of designs in the Museo Napoleonico in Rome.

Luigi Valadier is a magnificent volume, whose plates, including spectacular details, present an eloquent picture of Valadier’s range and virtuosity. Drawings from albums in the Pinacoteca in Faenza and the Museo Napoleonico, from that shown by Artemis in London in 1991 with a catalogue introduced by González-Palacios, and from elsewhere, are interspersed among illustrations of surviving objects, finished presentation sheets contrasting with vigorous conceptual sketches. The sketches are often attributable to Valadier himself, while the presentation sheets are more difficult to allocate, given that his workshop employed 100 or more.

Family origins near Avignon in Provence, and the contributions of Luigi’s father, Andrea (1694-1759), a goldsmith in Rome from around 1720, and of his son Giuseppe (1762-1839)—the future architect who in 1827 sold the workshop to his brother-in-law, the goldsmith Giuseppe Spagna—are noticed insofar as relevant to Luigi’s oeuvre, but Luigi is the focus.

Valadier’s works are presented thematically: secular silver for the toilet, for breakfast, for the desk and so on. (A vast service for Prince Marcantonio Borghese, delivered from 1769, included 100 round dishes, and was later embellished, gilded—even triple-gilded—and extended with sculptural tureens, sauce-boats and cruet stands.)

A gifted craftsman, an original designer and a powerful impresario of the decorative arts with an international clientele, Luigi Valadier deserves the limelight

A special category were Valadier’s desers, complex table centrepieces, two of which were purchased by the Bailli de Breteuil, the noble French ambassador of the Knights of Malta to the Holy See. One, in the Hermitage, St Petersburg, was sold to Catherine the Great in 1777; the other, in Madrid, was sold after Breteuil’s death in 1786 to the future Charles IV of Spain). A third (Louvre), made for Pius VI’s nephew, Prince Luigi Braschi Onesti, was taken to Paris in 1798. Consisting of polychrome combinations of marbles, hard stones and gilt bronze, the desers assemble architecture (arches, obelisks and columns), vases and sculpture, on exquisitely tailored bases, to create miniature tableaux of ancient Roman magnificence.

Stone-mounted pieces in gilt bronze were a Valadier speciality, from vases delivered to Madame Du Barry in 1773 to a chimney-piece installed at Badminton House in 1775 and a model of Trajan’s Column, over 6ft high, bought by Karl Theodor, the Elector of Bavaria, in 1780. A group, including vases and candelabra, mainly of porphyry and now at Pavslovsk, was acquired in 1782 by the future Paul I of Russia. Valadier’s responsibility for mounting the Vatican’s bronzes and cameos extended to his role in the design and ornaments of four great cabinets in the Museo Profano of the Vatican library.

It is predictable that Valadier, a leading Roman craftsman, received ecclesiastical commissions from the late 1740s when he worked with his father on bronze grilles, lost in the 1755 earthquake, for the Lisbon Patriarchal Church. Works in Rome include candlesticks (1748) for Sant’Apollinare; the altar (1760) of the Cappella Paolina in Santa Maria Maggiore (with ravishing altar card frames in gilt bronze and lapis lazuli); and a sophisticatedly naturalistic silver-gilt Mass service made for Cardinal Orsini in around 1768 (now in Muro Lucano cathedral). A decade later he supplied a comparable gold service, now lost, to the bishop of Lérida in Spain. A massive sanctuary lamp and two chandeliers (1760) for Santiago de Compostela, the overpoweringly elaborate silver high altar of Monreale in Sicily, and two sanctuary lamps for Wardour Castle chapel, delivered in 1777, are rich indeed, but all must yield to the sheer opulence of the gold tabernacle that Valadier supplied to Seville cathedral in 1771.

After such luxury the severity of bronzes cast by Valadier, including the Dying Gladiator supplied to Syon House in 1765, may come as a relief. He produced other large bronze figures (and a stolid bust (1778) of Thomas Gascoigne at Lotherton Hall), but particularly interesting are small bronzes after antique models, now in Stockholm, purchased in Rome by the sculptor, Johan Tobias Sergel, for Gustav III of Sweden. González-Palacios argues that, although he did not sign them, Valadier was a major producer of these Neo-Classical souvenirs, more important than his younger rivals, Francesco Righetti and the brothers Zoffoli. An annotated list of models distilled from the workshop’s 1810 Registro Generale, suggests that Valadier was capable of producing a multiplicity of such bronzes.

Valadier’s involvement in the interior decoration and furniture of the Palazzo Chigi, the Palazzo Odescalchi and both the Palazzo and Villa Borghese is chronicled, as are works produced by Giuseppe Valadier in his father’s wake, including two spectacular tables of 1792 in the Vatican library supported by a platoon of Herculeses. A chronology, five documentary appendices and a substantial bibliography round off the richly annotated text.

A gifted craftsman, an original designer and a powerful impresario of the decorative arts with an international clientele, Luigi Valadier deserves the limelight. His stylistic development is difficult to pin down, as the taste of patrons does not always move in a steady art-historical sequence, but he was a brilliant exponent of the Barocchetto, also fluent in lively Rococo and, above all, a Neo-Classicist capable of refinement but also of a sculptural vigour, variety and intensity, which leads González-Palacios to invoke Piranesi as the truest comparison. Valadier’s 1785 suicide in the Tiber, apparently a despairing response to debts, provides an operatic finale to his spectacular career. Hugh Honour’s verdict of 1971, “the last great Roman artist-goldsmith”, has been fully vindicated.

The Art of the Valadiers, meanwhile, is complementary rather than competitive. Handsomely produced, its illuminating introductory essays are a prelude to three crucial documents: Andrea Valadier’s posthumous inventory of 1759 in Rome’s Archivio di Stato) (González-Palacios gives a careful selection); the massive 1810 Registro Generale at the Frick Art Reference Library; and an enchanting album from the Eisenbibliothek, Schlatt, with 14 drawings by Giuseppe Valadier detailing the manufacture of a vast casting and delivery of a bronze bell for St Peter’s, Rome, designed and planned by Luigi and completed by Giuseppe in 1786. In making the first two available the editor, Theresa Leonor Vale, has performed a signal service to scholarship, while the third brings Valadier’s technological mastery and organisational skills vividly to life.

A second major component comprises an illustrated catalogue of 307 drawings (with 33 versos) from the workshop, almost all belonging to the antique dealer, Alberto di Castro, the sponsor of the book, and scarcely any duplicated in Luigi Valadier. (Three intriguing prints—one a remarkable deser presented by the Spanish ambassador, Count Floridablanca, on Pius VI’s election in 1775 and two Berainesque ornaments by Johann Christoph Weigel (1661-1726), published in Nuremberg—receive scant attention.) Vale has ordered the drawings—some finished, some sketchy or even scrappy—by function: ecclesiastical, secular and architectural drawings, mainly attributable to Giuseppe Valadier, are the main divisions, while she singles out a large group with ornaments pricked for transfer. Uneven in quality, displaying many hands and considerable stylistic variation, they provide an arbitrary but revealing cross-section of a dynastic workshop accumulation.

The study of the Italian decorative arts, in which González-Palacios has played a pioneering, indeed cardinal, role, shows signs of entering a maturer phase. His magisterial Luigi Valadier and Vale’s stimulating The Art of the Valadiers should inspire new discoveries about this great protagonist and his dynasty. It is to be hoped that studies of other major figures will further illuminate the Roman scene, which was, as before, an international cynosure.