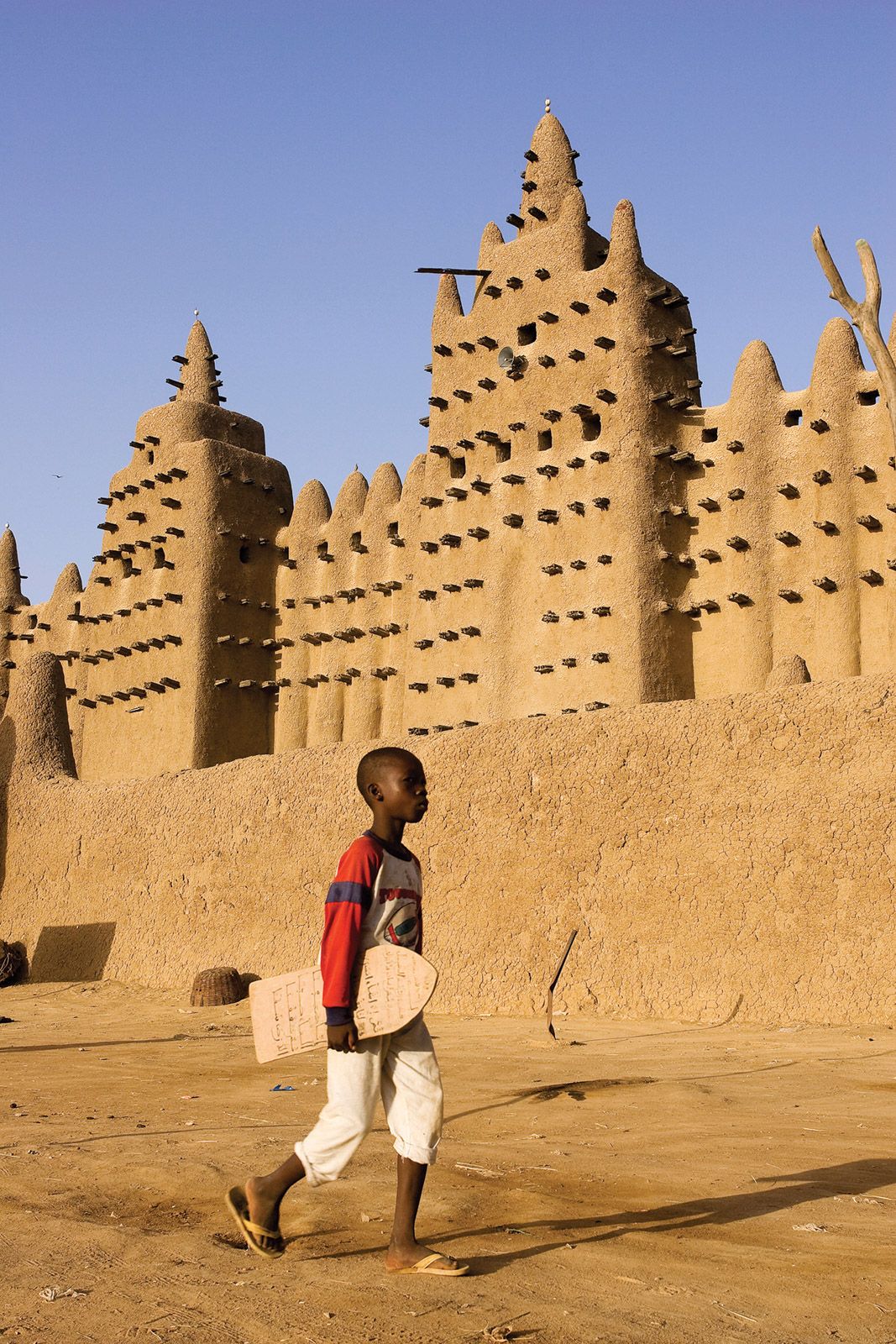 A boy carrying a lawh (wooden board on which he has written Qur’anic verses) walks past the Grand Mosque of Mopti, Mali Hemis/Alamy Stock Photo

Ithra is the King Abdulaziz Centre for World Culture in Dhahran, and this book, The Art of Orientation, has the lavish quality that can be produced by Saudi money, while the objects illustrated are mostly from the superb collections of the Museum of Islamic Art in Cairo. This combination should be a “dream team” for Islamic art studies, and the book should fill a real gap in contextual information, explaining the accoutrements of mosques and also their wide range of functions, as schools, hospitals, treasuries.

At whom is this work aimed? So rare and valuable are most of the objects shown here that few ordinary Muslims would worship in such an environment; a comparison might be with attending services in St Peter’s in Rome and in a small modern suburban chapel. This is not to comment on spiritual quality, but on contrasting aesthetic values. For non-Muslims, an explanation of the chronology and patterns of prayer would help to reunite a rather disjointed approach. The all-important “Orientation” of the title is the direction or qibla of Mecca, towards which Muslims must pray, the exact determination of which has resulted in Islam’s extraordinarily successful navigational and architectural history. Astonishingly, an isometric view of the earliest mosque of the Prophet in Medina given here does not indicate the qibla, which is the whole point of Mohammed’s decision to turn in prayer to Mecca rather than to Jerusalem. Some plans of later mosques would have been helpful in showing the various architectural forms that were adapted.

Abdullah Alkadi has studied pilgrimage routes to Mecca and draws interesting comparisons with our GPS satellites. Maps would be helpful here. Adornments of the mosque interior, rugs and carpets, and their reflections of architectural arrangements and of lamps are well described, but in the section on hanging mosque lamps, the explanations are not very clear. These superb objects would really be better described as lamp shades, the actual illumination being provided by a small oil-lamp hanging down inside. I have seen some modern reproductions of them at work and the light was exquisite: soft, flickering with slight draughts. Perhaps some photographs of such scenes would have helped everyone, Muslim or not, to visualise the original effect. As generally throughout the book, lamp epigraphy is translated, including relevant verses of the Holy Qu’ran. The Ithra Museum holds superb Qu’ran manuscript pages, so the very many Muslims and outsiders unable to travel to Dhahran will welcome seeing these. Some examples, such as a page from the Blue Qu’ran, originally in Qayrawan in Tunisia, can be found in rich collections worldwide, and true artistic appreciation of this richest of manuscripts, written in gold on indigo-dyed parchment, would surely be best demonstrated by reuniting these stray lambs.

On the abstract nature of mosque decoration, mainly geometric tiling, the commonest mistake in art history, that of intentionalism, is repeated, describing our reactions rather than seeking out the purpose of the original creators. Lisa DeLong attaches such contemporary terms, including Keith Critchlow’s invention, “Breath of the Compassionate”, to traditional patterns. The need for more pragmatic examination of the documents that legally created dedicated foundations is manifested by such practicalities as the gap between the giganticised written description of Sultan Qait Bey’s 15th-century foundation in the Cairo Qarafa cemetery and the small scale of the actual building, still extant. As for the geometry of decoration, DeLong comments that “the original architectural context of these tiles is lost to history”. But we might note that in the waqf (foundation deed) of Qait Bey there is a reference to a dome “made with string”. This indicated that the patterns were created by laying a web of string over the dome as it lay on the ground, providing an elaborate motif without recourse to the complex geometry of curved surfaces. DeLong prefers another approach: tiled walls are “handmade echoes of the spiritual alchemy taking place within the soul of the worshipper”. 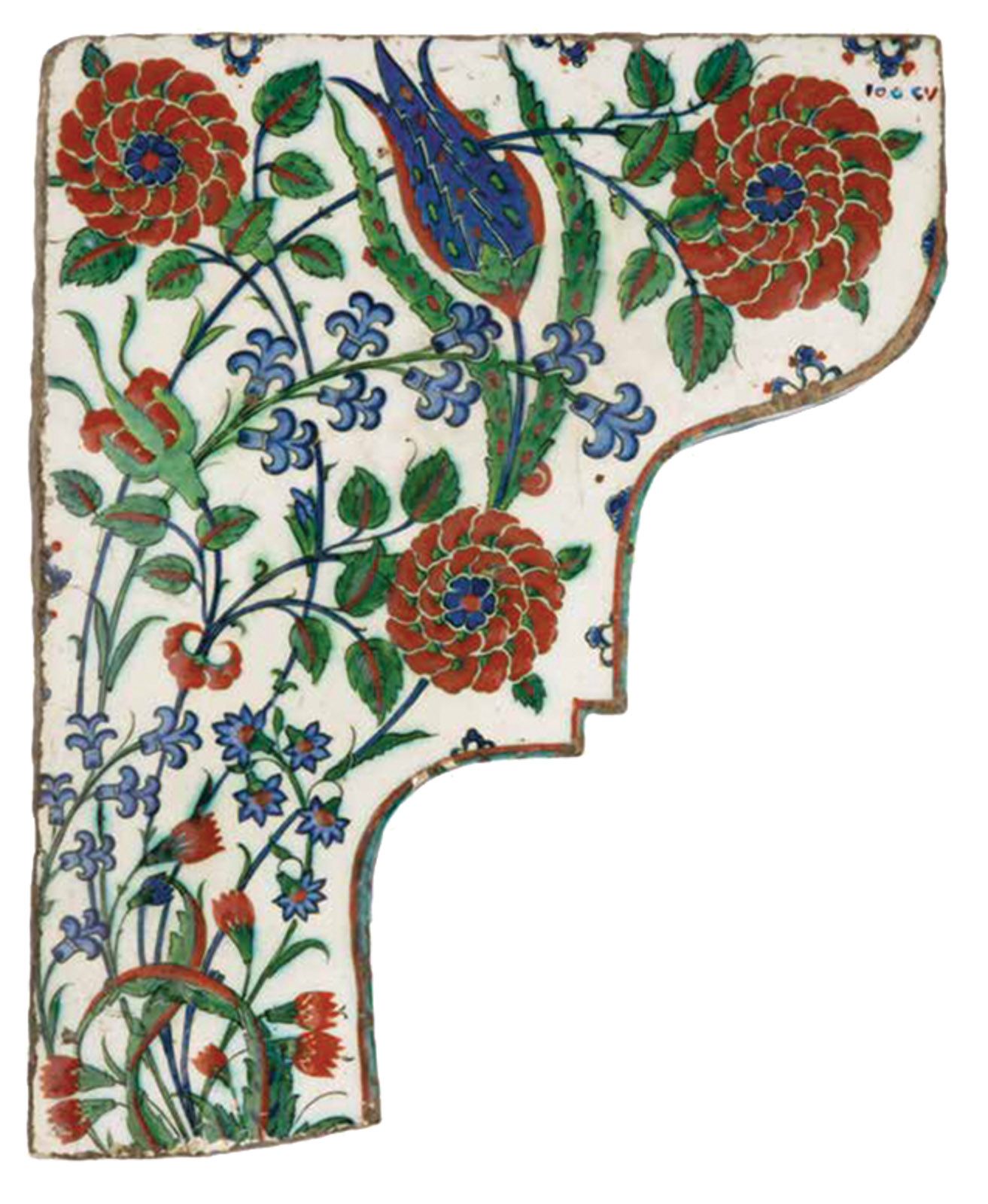 A 17th-century Iznik tile that may have framed a mosque door, window or mihrab

This review is mainly a forensic analysis, but aesthetic understanding is also very valuable and a noted Sudanese poet, Mohammed Abdel Bari, contributes a loving appreciation of light in a mosque that is a joy to read and gives non-believers a taste of the emotions created by a beautiful interior. But ranking order cannot be kept out of this: we find no fewer than five forewords and introductory material by various worthies.

Idries Trevathan, Mona Aljalhami, Murdo MacLeod and Mona Mansour, The Art of Orientation: an Exploration of the Mosque through Objects, Hirmer Verlag in association with Ithra Aramco, 264pp, £48 (hb)

• Jane Jakeman has a doctorate in Islamic art and architectural history from St John’s College, Oxford. She has lectured on Islamic art and has travelled widely in the Middle East. She has been on the staff of the Bodleian and Ashmolean libraries, and was librarian to the Oxford English Dictionary