Buccaneering, brilliant, art-loving—he created the power of Sotheby’s (and Christie’s learned by imitation) 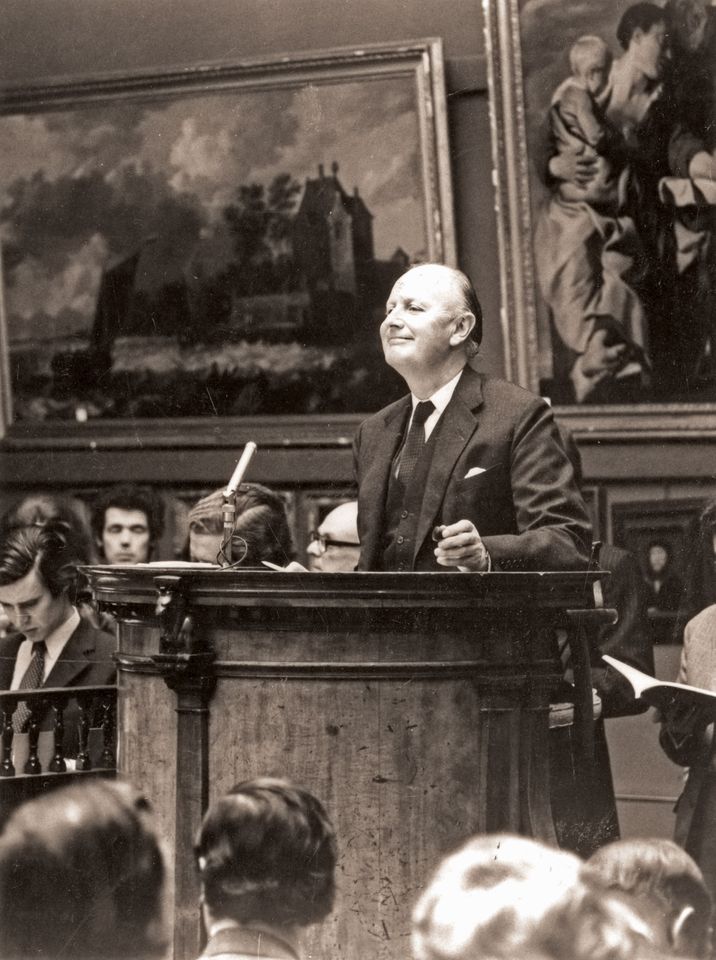 "Picasso was the most famous painter in the art world, but Peter Wilson (1913-1984) was its most influential figure,” says Peregrine Pollen, a senior figure at Sotheby’s in London and New York from the late 1950s to the 80s.

He also pioneered the PR stunt: In New York, when selling the treasure from Spanish ships sunk off Florida in 1715, Wilson mounted an exhibition with a live macaw in a reconstruction of the captain’s cabin, and only children were allowed to bid, addressed as “sir” and “madam” by Wilson, who took the auction himself.

Above all, he understood art and had a keen eye for its saleability. Richard Day, of the prints and drawings department from 1957 to 1990, remembers asking him whether prints were worth selling. Wilson replied that people tend to sell their less important possessions first, which are often prints, and so you gain access to their main collection of drawings and paintings.

His style of management was, at the very least, unorthodox. Marc Blondeau, on the staff from 1969 to 1987, remembers one meeting at Wilson’s house in the south of France with “Sotheby’s European representatives standing in the large, irregular-shaped pool with water up to our necks. Wilson dominated everyone with his height and the water only came up to his waist. There we were discussing the future of Sotheby’s Europe.”

This fragment comes from recollections by people who knew him well, compiled in a book, Sotheby’s Maestro, published by the auction house late last year. They are not the whole truth, but the mosaic they make up is more vivid than many footnoted histories, and the admiration with which he is (mostly) remembered shines through. This is how the sculpture dealer Cyril Humphries describes him: “As General de Gaulle would say, ‘He rowed towards his objective with muffled oars…’ [Wilson] was practically always in a plain blue suit, very dapper and very unusual… It was not just his height and physical presence but also demeanour; he moved easily on his feet.”

Wilson was an intelligence officer in Washington during the Second World War, which helped his relations in the US after Sotheby’s bought Parke-Bernet in 1964—Christie’s did not open in New York until 1977. But it was probably also the origin of the myth (and it seems that it really was just a myth) that he was a hypothetical Fifth Man, one of the group of upper-class British double agents that included the art historian Anthony Blunt. For Wilson was polyglot: cosmopolitan, ambiguous in his sexuality, calculating, secretive and had absolute mastery of himself, which squared nicely with the romantic idea of the fiendishly intelligent anti-hero.

He took Sotheby’s from being a quiet auction house known for its expertise in rare books to a world leader, and was instrumental in London’s succeeding Paris as the hub of the art market in the late 1950s after France shot itself in the foot by imposing a 7% tax on auction sales.

Christie’s, which traditionally had the advantage through its better links with historic collections, was left standing. Clifford Henderson, at Sotheby’s in the 1950s, says: “It should have been a level playing field… this was not the case, however. Joe Floyd [a former chairman of Christie’s] told me many years later that in 1959, Christie’s had to sell their own books to pay the staff and he felt it was all over for them. It took some 20 years for Christie’s to catch up.”

The turning point was the 1958 Jakob Goldschmidt sale of seven Impressionist works, which totalled £781,000. The New York investment banker had offered them to Christie’s, which failed to see their value, while Wilson turned the sale into a PR and financial triumph with a black-tie evening auction—the first of its kind. To fill it out, he shared the reception with Partridge, the furniture dealers then on the other side of Bond Street.

It was at this sale that guarantees were first considered, when Wilson thought of getting the shipping millionaire, Sir John Ellerman, lined up to buy the pictures if the reserves were not met. By 1972, Peregrine Pollen was proposing greater use of guarantees to gain business, with a rising scale of rewards for Sotheby’s depending how much above the guaranteed sum the bidding went.

Wilson’s other huge public triumph was to secure the sale of the contents of Mentmore, the Rothschild house belonging to the Earls of Rosebery, in 1977. This not only established Sotheby’s as a credible alternative to Christie’s for sales of historic collections but also persuaded the great and the good that better systems needed to be in place to protect the heritage. As the government havered interminably over whether to buy the house, its furnishings and works of art for £2m, Wilson persuaded the owners that Sotheby’s, which had done the valuation, would serve their interests much better by selling the contents. As usual, he made it into a huge international event, and it totalled £6m.

Wilson believed that people find art more fascinating if they know how much it is worth. He was the first to suggest an index of market values, which was created by the journalist Geraldine Norman for Sotheby’s and published in The Times newspaper. She started with the Impressionists, she says, and on the instructions of the head of the department, Michel Strauss, “laid out all the Monets and Renoirs in order of quality. He would then classify the new ones when they were sold, judging which matched which in order of quality. Then I got out my adding machine and totted up how much it had moved. Twelve different indices, each covering a different section of the market were established, and one was published per month round the year, measuring annual performance.” This was then compared with the stock market and cost of living index.

Popular as it was, the index lasted only from 1969 to 1971, for reasons that are revealing. The silver market was going down, and Wilson only liked graphs that were going up. Then Norman wrote an article in The Times saying that unsold lots should be revealed, which outraged him so much that he pulled the plug.

Wilson was a good talent-spotter and hired a lot of clever, often handsome, young men, the most famous of whom was Bruce Chatwin, who went on to a travel writing career. David Nash, at Sotheby’s from 1961 to 1969 and now of Mitchell-Innes and Nash Gallery, remembers his interview: “When I told Wilson that I had worked as a gravedigger at the Wimbledon cemetery and as an electrician’s assistant in a lunatic asylum, his face lit up and he pronounced that this would be a very useful experience in the auction world.”

Wilson knew how to give these young men enough autonomy to be creative and trusted them to share his own disregard for the rules. James Mayor, of the eponymous gallery and at Sotheby’s from 1969 to 1972, says: “In 1969 I asked him whether I might go and see museums in Switzerland. He said yes and ‘there’s just a little thing you could do for me’. He gave me a whole lot of gold boxes that belonged to the king of the Belgians and that really should have been reimported officially.”

What Wilson was incapable of doing, though, was sharing serious power himself. He ran the company with a tiny cabal and took major decisions without consulting the board. In 1969, after the crash in silver prices, the company was up against its overdraft limit and had to ring round clients to settle their bills, according to Howard Ricketts, in Sotheby’s works of art department from 1959 to 1972. With Michel Strauss, Wilson started buying Impressionist paintings secretly through a dealer based in France called Stephen Higgins and then entered them for sale in London. This was discovered only when a substantial number remained unsold. There was an internal enquiry and Wilson got through it, but it made the board mistrustful of him.

In any case, by the late 1970s, he had grown the company to the point where it could no longer be run informally. In 1980 he resigned as chairman and it is a sad fact that, although he continued to have Sotheby’s interests close at heart and worked to get it more business, some former colleagues considered this interference. After a confused interregnum, Sotheby’s ended up in the hands of mostly American investors and it has been run by businessmen ever since.

James Mayor has the last word. “Two great British institutions were created and destroyed by their founders: the Conservative Party with Maggie Thatcher and Sotheby’s with Peter Wilson. Neither of them had really thought of a successor.”