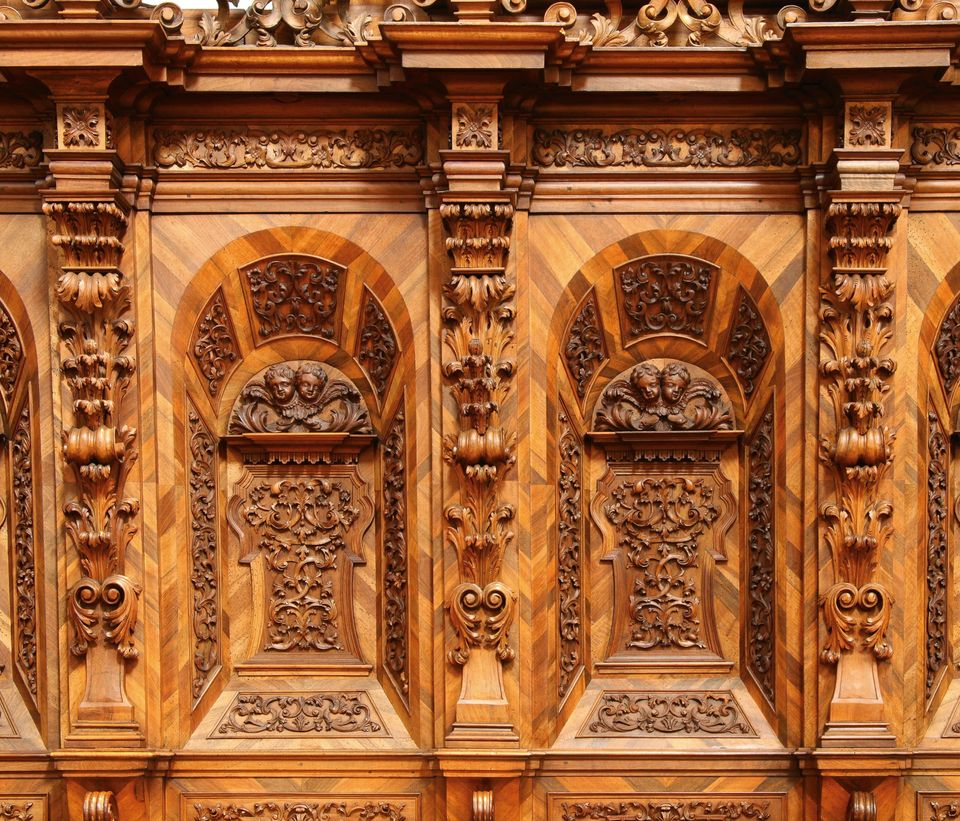 Detail of the carved and walnut-veneered choir stalls of the Premonstratensian church at Schlägl, Upper Austria, by Hans Georg Stempl (1732), a cabinet-maker in Rohrbach and, after his death, by his widow, to 1736

Anyone who has attended the 11-o’clock sung mass in the Augustinerkirche, Vienna’s court parish church, on a Sunday will have been struck by the contrast between its architecture, a chill re-Gothicisation by Ferdinand von Hohenberg in 1783, and its richly carved walnut pews, incorporating biblical reliefs and elaborate trophies of ecclesiastical utensils, the asymmetric pew-ends teetering on the brink of Rococo. These pews were originally supplied to the Schwarzspanierkirche in Vienna from between 1730 to 1734 by Johann Baptist Straub (1704-84) who, up to 1725, had worked in the Munich Residenz and at Schloss Schleissheim with Joseph Effner, and who returned to Munich in about 1734.

Most historians of such monuments have—understandably—concentrated on their architecture, and on their painted and stucco decoration, whereas woodwork tends to merit only a cursory mention, if noticed at all. Michael Bohr’s new book, richly illustrated and massive in content, though not in format, amply fills this vacuum with a survey of Austrian Baroque ecclesiastical woodwork, focused on 40 sites in Vienna and in Upper and Lower Austria. Among the celebrated buildings he examines are the votive Karlskirche in Vienna, designed by J.B. Fischer von Erlach (1656-1723), the Benedictine abbey of Melk, high above the Danube, the Augustinian abbeys of St Florian and Klosterneuburg, intended by the Emperor Karl VI as his Escorial, but never completed, and the Cistercian Wilhering. His coverage is not and is not intended as comprehensive (for instance fine choir-stalls by Joseph Deutschmann (1717-87) at Engelszell, a retreat from Wilhering, go unmentioned), but as representative.

His survey is underpinned by illuminating historiographical and historical overviews, the latter ranging from major events such as the Counter-Reformation, the expulsion of the Protestant aristocracy after the battle of the White Mountain in 1620, and the repulse of the Turks before Vienna in 1683, to careful accounts of the immigration of cabinet-makers, the nature and size of monastic workshops, woods used, their procurement and seasoning, collaboration between cabinet-makers and carvers, and the constant need for repairs. A stylistic analysis follows, stressing the influence of imports (Passau, now just over the border in Bavaria, emerges as a prolific manufactory of chairs), of patrons and architects and their travels, and of prints.

Stylistically Sakralmöbel commences with obsessively aedicular cupboards of 1618 at Kremsmünster and plainer aedicular choir stalls of the same period in Wiener Neustadt. Choir stalls of 1633 from the Benedictine abbey of Garsten, with 198 carved figures in an ornamental style not far advanced from Gabriel Krammer, are now in the Jesuitenkirche in Linz, where confessionals and sacristy cupboards of about 1680 incorporate gory auricular ornament in the manner of Friedrich Unteutsch. These confessionals also have crestings in an exuberant acanthus style influenced by the engravings of Echter and Indau, a style at its most flamboyant in the slightly late choir stalls at Baumgartenberg. Thereafter, Berainesque grotesques and strapwork, both in carving and marquetry, often echoed the work of stuccators, although it is rare for stucco and woodwork to be fully integrated, as with the choir stalls at Melk. The decorative language sometimes leaned towards France, sometimes to Italy, Régence or barocchetto, but it is perhaps surprising that there are scarcely any instances of an uninhibited Rococo, although the crestings to the choir stalls at Altenberg and Krems, both probably designed and carved by Joseph Matthias Götz (1696-1760) in about 1735, almost qualify. Rococo is indeed present in lively symmetrical cartouches on the later pews at Krems, but there is no Rococo ensemble to compete with, say, the choir stalls at Zwiefalten in Württemberg, Ottobeuren in Bavaria or Mainz cathedral.

Further chapters describe the origins, functions and development of the various types of furniture, choir stalls in pole position, followed by confessionals, pews, and the furnishings of sacristies, treasuries, refectories and libraries. The celebrated monastery plan of about 820 preserved at St Gall is a frequent baseline, but the influence of the Council of Trent is underlined with references to Carlo Borromeo, Instructiones fabricae (1577) and to Jacob Müller’s KirchenGeschmuck (1591). The 40 sites are then described, each with a historical introduction. A single building may contain many fixtures of different periods. For instance, the Benedictine abbey of Kremsmünster occupies more than 23 pages with 20 illustrations, ranging, apart from the 1618 cupboards already mentioned, from a door of 1619 to a refectory pulpit of 1780, while the Augustinian abbey of St Florian takes over 26 pages with 23 illustrations, from the choir stalls commenced in 1691 to sacristy cupboards completed in 1743.

Bohr’s entries incorporate a mass of documentary research. Here may be singled out the 1750 inventory of the treasures of the Schottenstift in Vienna, the 1721 contract for the completion of the choir stalls of the Deutschordenskirche in Linz, and a remarkable contemporary account of the integrated construction of the elaborate choir stalls at Klosterneuburg, completed in November 1723, surmounted by the emperor’s oratory, formed as spectacular glazed vitrine.

Because the furniture described is either fixed in its original position or securely provenanced, it provides anchors for the study of Austrian secular moveables, which have almost invariably wandered from their original locations. Sakralmöbel, buttressed by a 35-page bibliography, is indeed a ground-breaking achievement, and it is to be hoped that its second volume, covering the rest of Austria, will follow soon.