Despite the dodgy gaze that Titian attributed to him in his famous portrait, this double volume demonstrates the Italian's important role in cultural history 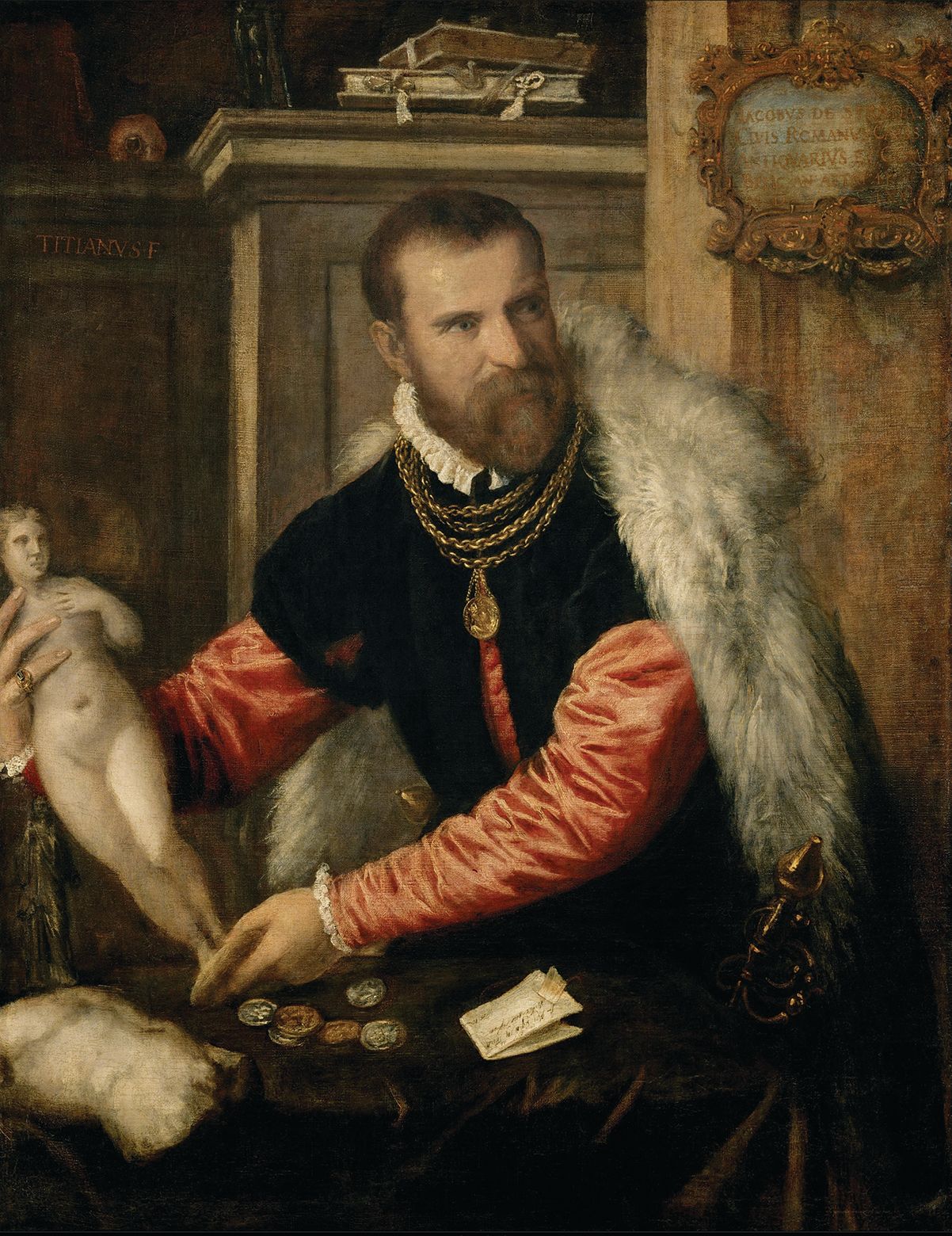 In the introduction to his comprehensive two-volume work, Dirk Jacob Jansen laments the fact that today Jacopo Strada, the Mantuan goldsmith, numismatist, publisher, dealer, imperial antiquary and architect, is famous merely for having had his portrait painted by Titian. Certainly, the work, produced around 1566-67 and now in Vienna’s Kunsthistorisches Museum, is one of the most magnificent and simultaneously most expressive portraits of the Venetian artist’s late period. Twentieth-century art historians, most notably John Pope- Hennessy and Augusto Gentili, have viewed the distinctive way Strada looks to one side as evidencing the characteristic shiftiness of a dealer, even the personality traits of a mafia boss—someone “you wouldn’t buy a used car from”.

Quite apart from the discussion around Titian’s portrait, Strada has been of interest to art historians, for example, for his 1575 edition of Sebastiano Serlio’s Seventh Book and for his acquisition of Raphael’s vast body of drawings from the artist’s heirs, leading to the conclusion that as a patrician he possessed a considerable private fortune. Jansen has previously revealed various facets of Strada’s multiple activities in numerous essays—yet with this book he wanted to amalgamate these different aspects in a major overview that would establish the Mantuan’s significance once and for all.

The first volume covers Strada’s life—from his birth in Mantua in around 1515, through his education, his marriage to a Franconian noblewoman and his relocation to Nuremberg, supported by his long-term friend and patron Hans Jacob Fugger, his later move to Vienna and initial contacts with the imperial court, his appointment as imperial architect and antiquary, to his death in Vienna in 1588. The second volume deals with Strada’s “Musaeum”—his term for his house, library, workshop and his extensive collections of various art objects, encompassing coins, medals, Kunst­kammer objects, antiquities, prints, drawings and paintings. Finally, Strada’s role as an agent in artistic matters is discussed. A comprehensive back-matter apparatus concludes this richly illustrated work. This structure inevitably produces some overlapping and repetition. The book’s real strength lies in the infinitely rich detail of well-­researched and documented context. Jansen offers a fascinating insight into Italian antiquarian art production and into art north of the Alps, which was increasingly influenced by Italy.

Strada demanded that the art of antiquity should not only be studied, preserved and taken as a model in all spheres of contemporary art, but also led the way by example: during his early travels he was already making acquisitions and commissioning young artists to produce drawings copying classical buildings and the reliefs on Trajan’s Column in Rome, as well as contemporary works such as Giulio Romano’s decorations for the Palazzo del Te and Palazzo Ducale in Mantua, and Raphael’s loggias in the Vatican. One artist entrusted with this task was Giovanni Battista Armenini, famous for his 1587 work De’ veri precetti della Pittura, who lived in Strada’s house in Rome in 1555. Jansen also ascribes to Strada’s influence the increasing adoption of Italian architectural forms in imperial projects at the Hofburg, the Stallburg and the Neugebäude in Vienna, and also in many aristocratic buildings in Bohemia and Hungary. Drawings by Strada himself, however, survive only for the Munich Antiquarium that he designed for Duke Alb­recht V of Bavaria. Strada created his own magnificent residence in the centre of Vienna, setting up a studio there and, on the piano nobile, his “Musaeum” with its abundant and diverse art treasures—designed to make plain his ideas to the Emperor, the aristocracy and the community of scholars and antiquaries.

Strada’s intention was for his collection of visual documentation—comprising drawn copies of classical or classically influenced designs, from portraits and architectural images on antique coins and medals, through to statues, busts and reliefs—to be organised thematically and prepared for publication, in order to promote the art of antiquity as the ultimate aesthetic standard. This and even more ambitious projects—such as an 11-language dictionary—remained unrealised due to a lack of financial support. After the death of Emperor Maximilian II in 1576, Strada’s role as imperial architect and antiquary came to an end. Emperor Rudolf II had secured, in Prague, the services of his disinherited son Ottavio (1550-1607), whose daughter, Katharina, became the emperor’s mistress and bore him six children.

Readers may be surprised at how closely interconnected the worlds of scholars and antiquaries were in the Renaissance period. What remains entirely unclear, however, is Strada’s connection with Italian artists at the imperial court, such as Arcimboldo, given that both were involved, almost simultaneously, in designing court festivities and that Arcimboldo may have contributed to the decoration of the Neugebäude. Strada’s indignation that Wolfgang Lazius, physician and historian to Maximilian II, described him as merely a goldsmith and not a scholar, shows in itself that Strada saw himself primarily as an antiquary and architect on a par with the scholars. Perhaps this, too, is one reason why it took so many pages to show his true achievements in their proper light? At any rate, Jansen has successfully demonstrated Strada’s importance in the cultural transfer from Italy to the North. In the process he has assigned him a unique role as an “agent of change” in the cultural history of the second half of the 16th century—though whether this accords with Titian’s portrait may continue to provoke heated debate.

• Sylvia Ferino is the director emerita of paintings at the Kunsthistorisches Museum, Vienna