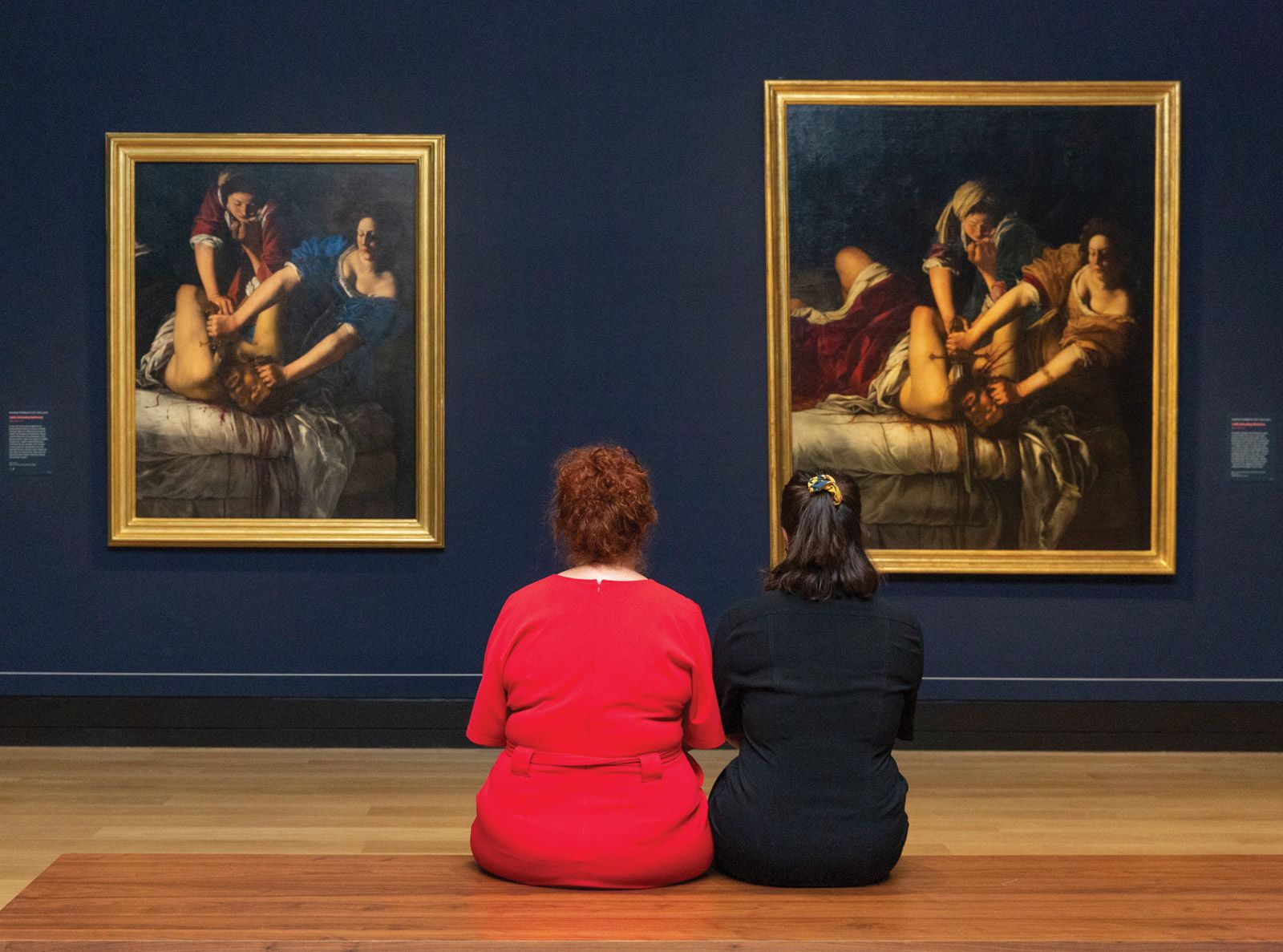 The two images of Judith beheading Holofernes sit side by side in the exhibition The National Gallery, London

In the National Gallery’s first ever major exhibition devoted to a historical woman artist, one of the highlights is a newly rediscovered work by Artemisia Gentileschi purchased by the gallery in 2018. Her Self-Portrait as St. Catherine of Alexandria (around 1615-17) is only the 21st painting by a woman to enter the permanent collection, as opposed to 2,300 works by men. It seems a rebalancing is overdue.

Women artists from 16th- and 17th-century Italy are reaching a peak of popularity now, with an exhibition devoted to Sofonisba Anguissola and Lavinia Fontana at the Prado last year, and another last spring in Florence of works by Giovanna Garzoni. Our view of Artemisia Gentileschi is also at a turning point, with rediscoveries of both paintings and documents changing our view of her significance. She has come out of the shadow of Caravaggio, and also of her painter father, Caravaggio’s friend Orazio Gentileschi. But the best reason to view this show even in a time of pandemic is for the sheer visual drama and visceral pleasure given by these painterly, sensual images, which often seem to burst the bounds of their frames to close the gap between viewer and painting. If you’ve felt starved for an exciting blockbuster event, this exhibition will not disappoint.

"These painterly, sensual images often seem to burst the bounds of their frames to close the gap between viewer and painting"

The curator writes that her aim was to clarify the career of Artemisia by presenting the best-documented, most securely attributed paintings. Alongside this effort to define a core oeuvre, the general theme of the show concerns the relationships between Artemisia’s life and her art. In keeping with this project, the paintings are presented in chronological order and by geographic origin, unfolding in room after room the itinerary of Artemisia’s moves from Rome to Florence, Naples, Venice and London. There are some missed opportunities to bring together in one room the artist’s various treatments of the same theme, such as the three versions of Susanna and the Elders, a subject that Artemisia addressed at widely spaced intervals through her career. In total, 30 works by Artemisia are on display: this is a tightly focused show. It allows for a spacious hang, useful for social distancing, but also gives each painting its own dramatic space.

And that dramatic space is important for some of the large and theatrical works on view. The two versions of Judith beheading Holofernes are hung side by side, a double dose of blood and gore. These are Artemisia’s most often-reproduced works and have frequently been compared to Caravaggio’s representation of the same subject. The violence that Artemisia represented has been discussed as her response to her rape at the hands of the artist Agostino Tassi in 1611. A document from Rome’s Archivio di Stato recording Tassi’s trial for the rape is on view in the first room of the show, a curatorial choice that puts the emphasis on a direct, confessional relation of Artemisia’s life to her art. 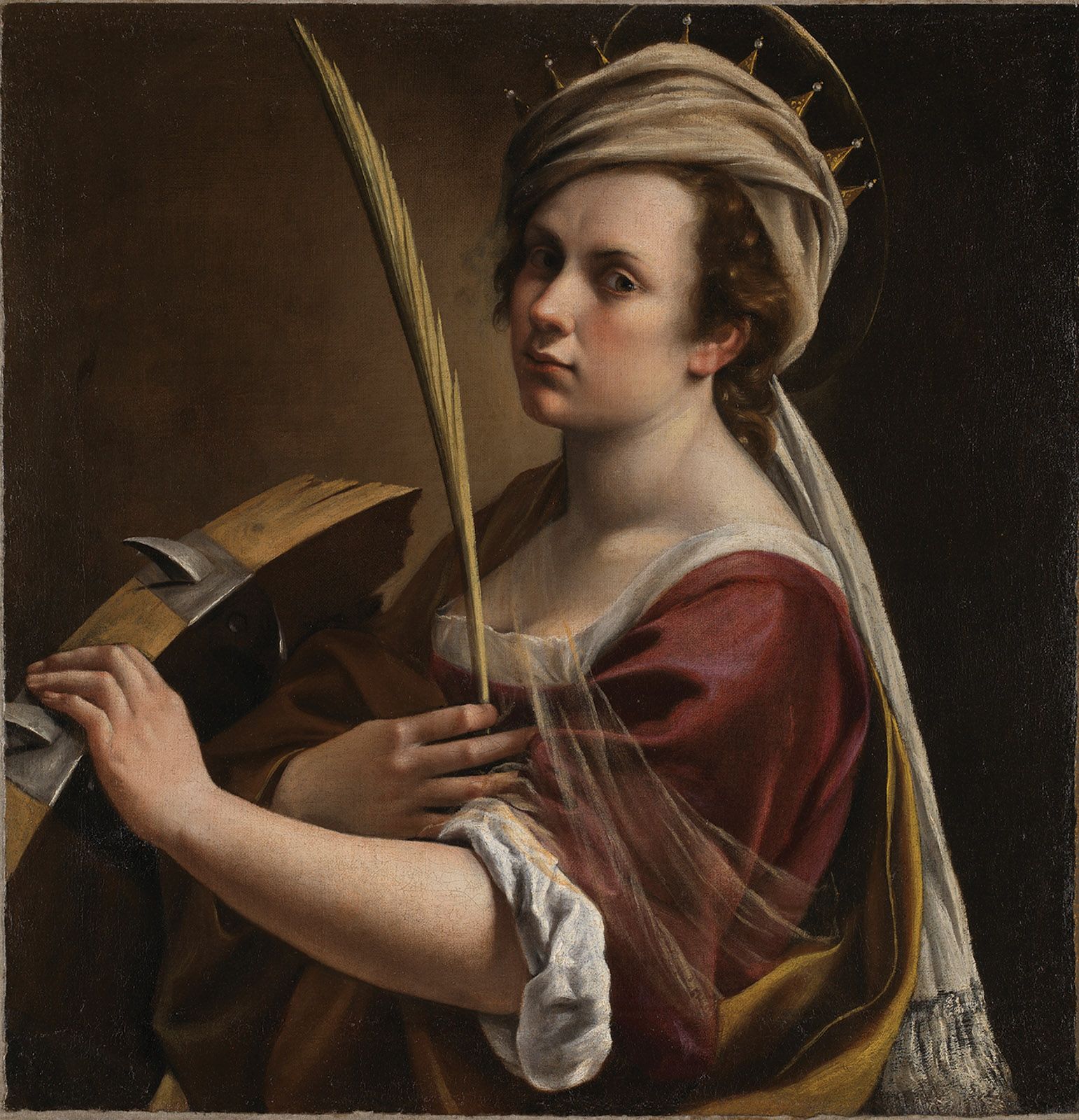 As the catalogue also makes clear, there are other ways of relating the artist’s life to her paintings, which are grounded in her ambition to rival the best artistry of her contemporaries and predecessors. Having the two versions of Judith side by side allows us to appreciate Artemisia’s working process and her virtuoso paint technique. The painting now owned by the Museo di Capodimonte in Naples was apparently executed first (around 1613), for the artist has traced its outlines to transfer the figures to the second version (around 1615), now in the Uffizi in Florence. Tracing one painting to generate a new version was not uncommon workshop practice. Caravaggio had duplicated some of his compositions using this same technique, and Orazio Gentileschi, too, used it to create multiple replicas of his own works. In the early 17th century in Italy, as I have tried to show in my own recent research, this was a technique closely associated with a type of profoundly naturalist painting, one characterised as working “from life”, called dal vivo or dal naturale. Artists seem to have enjoyed the paradox of replicating compositions that had their origins in close observation of live, posed models.

Artemisia’s practice of tracing compositions allowed her to then elaborate and differentiate one painting from another, especially in terms of colour and the details of costume. The Naples painting of Judith was at some later date cut down along the left side and top of the canvas, decentring the composition. The Uffizi version shows more clearly the effect Artemisia sought, placing the half-severed head of Holofernes at the centre of an explosion outward, with women’s powerful arms and gushing blood making a pattern like the radiating spokes of a wheel. The violence is subordinated to a clear visual order. The lush handling of drapery may differ from one Judith to the other, but in both paintings the drapery, with its folds of patterned, textured fabrics, takes on a dynamic life of its own. The sumptuous dress of the women in these works reminds us that as Artemisia was making her fame at the Granducal court in Florence, documents show her to be spending a ruinous amount on fine living and subsequently deep in debt. The depicted finery here is part of the balance between elegance and violence that governs both compositions.

Another opportunity to judge Artemisia’s painterly aims can be found in the same room. There, the National’s Self-Portrait as St. Catherine of Alexandria hangs together with the small Self-Portrait as a Female Martyr, the Self-Portrait as a Lute Player and a second St. Catherine of Alexandria, all dating to between 1613 and 1617. Three of the four paintings were apparently based on tracing one composition to form a new work, although it is not clear which was made first or if all were being elaborated at the same time.

At the basis of all four paintings is Artemisia’s representation of her own appearance. The National Gallery’s St. Catherine slightly lengthens the neck and smoothes her nose, a kind of idealisation that is created in the process of painting rather than perfected in drawings beforehand. The golden hair, broad features and distinctive nose recur again and again throughout Artemisia’s oeuvre, a phenomenon that has raised much scholarly discussion. The catalogue asks us to view Artemisia’s frequent use of self-portraiture first as a pragmatic choice. In a letter to a patron, she complained of the high cost of hiring models to pose for her. It is also possible to see her using her own beauty in the way that earlier women painters such as Anguissola had done, presenting herself in highly crafted self-portraits as both a creator of beauty and a beautiful creature.

However, unlike Anguissola’s overt self-portraiture, Artemisia uses her appearance to represent Biblical saints and sinners or classical heroines, as if she were a performer in a role. Next to Self-Portrait as St. Catherine is her Self-Portrait as a Lute Player, in which she seems to be dressed as a gypsy. It is possible that this relates to an actual event in Florence, where an “Artemisia” danced in gypsy costume. In any event, we know that she worked at court in close proximity to famous actors and singers. Her use of self-portraiture as a form of portrait historié seems to layer identities in the manner of an actor performing a star turn. It is rather wonderful that, thanks to the National Gallery’s purchase, the Self-Portrait as St. Catherine will eventually hang close to Caravaggio’s Boy Bitten by a Lizard, (around 1594-95) one of two versions of a composition, produced by tracing, in which the artist may have used himself as model. Artemisia’s image will be in good company. 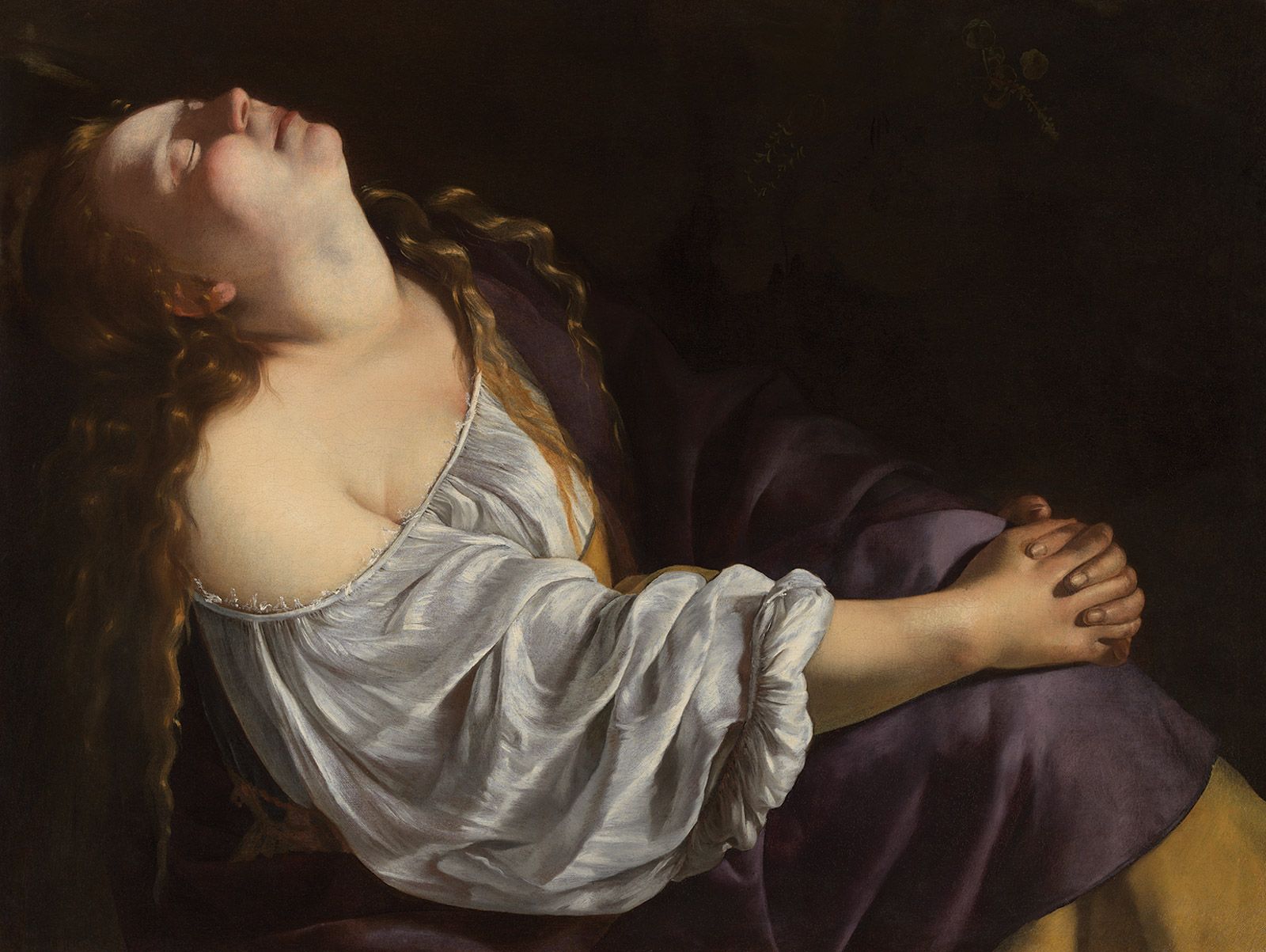 To my mind, the stand-out paintings from the exhibition are the ones in which Artemisia gave her own appearance to women represented in moments of profound self-abandonment. The subject of the reformed prostitute Mary Magdalene lent itself to Artemisia’s self-portraiture. Her Mary Magdalene in Ecstasy (1620-25), newly rediscovered in 2017, depicts the converted sinner recumbent, with her head flung back and eyes closed. Her body fills the frame and extends beyond it, her proximity allowing us to identify all the more with her inward-turned state. Artemisia based the composition on a now lost work by Caravaggio, which she reversed. Suspended between erotic sensuality and religious self-renunciation, what are we to make of her self-portrayal here? Unlike the St. Catherine, the figure does not look out at the viewer, that hallmark of self-portraiture. Recognising its resemblance to the artist nonetheless gives a slight shock similar to that which Manet’s Olympia (1863) gave its first viewers, at seeing the canonical figure from past art—whether of Caravaggio’s Magdalene or Titian’s Venus of Urbino (1538)—elided with a recognisable, individual woman. Here, it gives a frisson all the greater because the effect was produced by a woman depicting her own body.

The exhibition brings Artemisia Gentileschi’s career into much closer focus. It will surely inspire renewed study of this significant, distinctive artist. And perhaps it’s not too much to hope that it will bring renewed attention to the early modern women whose careers in the arts remain to be fully discovered.

• Sheila McTighe is the senior lecturer in 17th-century art at the Courtauld Institute of Art, London