This is the view of a former Getty chief, who says the problems of the Serenissima are a paradigm for other historic cities 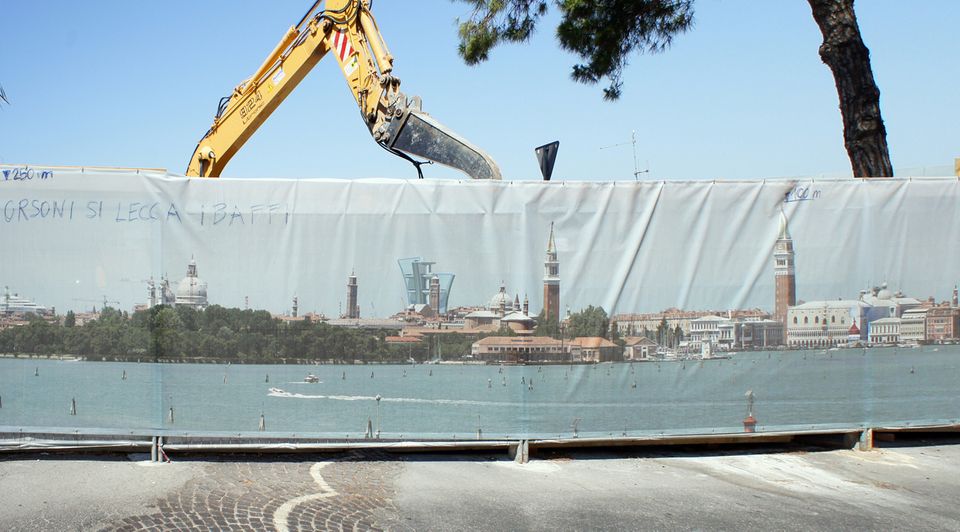 A photomontage of what the “Tower of Light” proposed by Pierre Cardin for the mainland behind Venice would have looked like from the Lido. This 2013 project was supported by the then mayor of the city, Giorgio Orsoni. Fortunately, it was withdrawn, although not quite killed Photomontage and photo by Leo Schubert

Venice is doomed, says, Salvatore Settis, unless there is a moral revival in Italy. He is a professor of archaeology who has been an advisor on cultural matters to the Italian government and was head of the Getty Center for the Arts and the Humanities in the 1990s. Italians know him from his eloquent denunciations in the press, which say that everything that has made La Bella Italia so beautiful is going to hell in a handcart.

This book is a development of some of these writings, which have also appeared in the French, German, and Russian newspapers; Settis really wants the world to know that Venice may die.

Venice, he emphasises repeatedly, is a paradigm for other cities around the world in the tensions between its historic nature and modern needs, in the delicate relationship between the built city and the environment and in the rush to exploit it for short-term gain.

The strength of this book is that it shows how wrong and lazy thinking has led to wrong policies—or the absence of policies.

He pounces on the complacent mantra, “Beauty will save the world”. “It won’t save anything or anyone if we don’t manage to save beauty”, he snaps, and quotes the sober words of Article 9 of Italy’s admirable Constitution, written in 1947, which are the touchstone against which he compares the havoc, neglect, corruption, hypocrisy and bombast that have done so much damage over the last 50 years: “The Republic furthers culture and scientific and technical research. It protects the country’s landscape and historic and artistic heritage”.

“Whoever fights for Venice with the weapon of the Constitution fights also for Italy”, he says.

He rightly identifies one of the reasons behind the decline as being economic liberalism, which has led to the opening up of the Italian cultural sphere to private enterprise. He sees that it has encouraged a naive selling-out to the profit motive —as with the huge advertisements that for years defiled Venice—but he could, perhaps, have added that this has happened because the reasons for the symbiosis between the public and private sectors that exists in the UK and USA have not been understood by successive Italian governments.

In the Anglo-American world the collaboration has been beneficial because all parties have remembered what the mission and purpose of a restoration project, museum, theatrical performance etc should be. No one responsible for such an iconic site as St Mark’s Square would have dreamt of allowing such ads to appear and no sponsor would have dreamt of putting them there, because the whole point of sponsorship is to buy into the superior status of art, not drag it down to the level of everyday life.

Settis is aware of how socio-economic dogma has also added to the poisonous mix. He demolishes fashionable theories such as the economist Joseph Schumpeter’s idea of creative destruction. Venice, says Settis, must remain unchanged but learn to develop “an artistry of reuse” that is not just devoted to mass tourism.

I do not fear, as he seems to, that the many imitation Venices around the world will accelerate the loss of identity of the city by polluting its image, but I agree with him whole-heartedly that the current non-management of the tourists and the way in which the authorities fail to lift a finger against the shortest of short-term economic interests will destroy the city as a living and diverse community.

Settis has sniffed out the ghastly hypocrisy of those who have persuaded themselves that Venice is not a “real” place: “That is how the real problems of Venice become the excuse to make them even worse by pillaging it”.

This is a painful book to read. It is a lament for the day by day destruction of great beauty, “the fairy city of the heart”, as Byron called Venice, and it is anger and disappointment at what Settis sees as the moral bankruptcy of Italy today, a stupidity and vulgarity that makes his country unworthy of its great heritage.

In his next book, it would be good see Settis name names and describe the shameful trahison des clercs by which two well-known academics became mayors of Venice yet actually accelerated the city’s decline when they should certainly have known better.

One is Massimo Cacciari, a philosopher and Dante expert, who in his first mandate (1993-2000) allowed the conversion of private houses into b+bs, which in a trice caused property prices to shoot up, Venetians to cash in and leave town, killing off neighbourhood life and replacing it with tourism.

The other is Paolo Costa, an economist, former rector of Ca’ Foscari university and until recently head of the Venice Port Authority. He is proud of having brought the big cruise ships into Venice and even now is behind the proposal to provide an alternative route for them to reach the port that involves deepening a channel through the lagoon that will damage its ecology even more.

Settis could also look into the governance structure for Venice, which is splintered between half a dozen authorities so that they could not possibly run the city and its lagoon strategically even if they all loved each other as brothers (which they do not).

For after lamenting the condition of Venice, we must have action if we truly do not want it to die, and the only way to make that happen is by analysing the current dynamics of power there, reshaping it drastically so that it can come up with a long-term plan for the city, and then apply it. The solutions to the Venice problem will be technical and organisational in nature, not a miraculous improvement in the morality of the nation.

• To hear Salvatore Settis talk about his new book, listen to our podcast

This is an updated version of a review of the original Italian edition, published in The Art Newspaper No. 264, January 2015