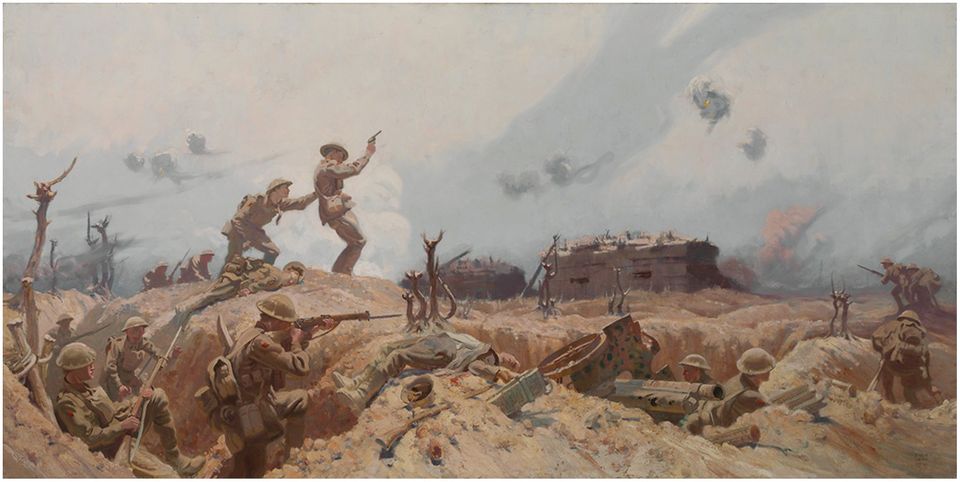 The recent memorialisations of the First World War have included many publications on previously overlooked facets of the conflict: for example, women’s contributions and the changes in their social status; the war as experienced by civilians or the combatants of the enemy nations; and the points of view and experiences of the “other ranks”. New discoveries of old films and photographs, recovered and enhanced by contemporary technology, and the recent burgeoning of popular genealogical research have enriched the picture with stories of otherwise overlooked people who took part.

Perhaps as a general result of the rise of “post-colonial” academic concerns and certainly a much needed expansion of the picture of the war, has been the research into and publication of the contributions made by the overseas subjects of the British Empire in Canada and Africa; and, in this book, Australia. The particular area explored is Australia’s official war art and artists. The author, Margaret Hutchison, lectures in history at the School of Arts at the Australian Catholic University, Brisbane, and her book is one of series, the Australian Army History, a collaboration of Cambridge University Press (CUP) and the Army History Unit of the University of New South Wales in Canberra.

In common with other nations, the Australian government created an official war art scheme and between 1916 and 1922 commissioned and collected around 2,000 sketches and finished paintings that formed the basis of a national collection. For the first time, Hutchison has looked systematically at the collection to discover the government’s criteria and aims, and the influence that the collection had on other Australian artists. First-hand, eyewitness representations were given pride of place; while aesthetic criteria were not primary considerations when it came to commissions or purchases for the collection.

Unusually for CUP, there is a more than generous supply of colour plates instead of its customary murky, illegible black and white illustrations that cripple its art titles. Few artists’ names will register with readers outside of Australia, but it must be said that many of the works have arresting subjects as well as artistic finish, such as Fred Leist's Australian Infantry Attack in Polygon Wood (1919).