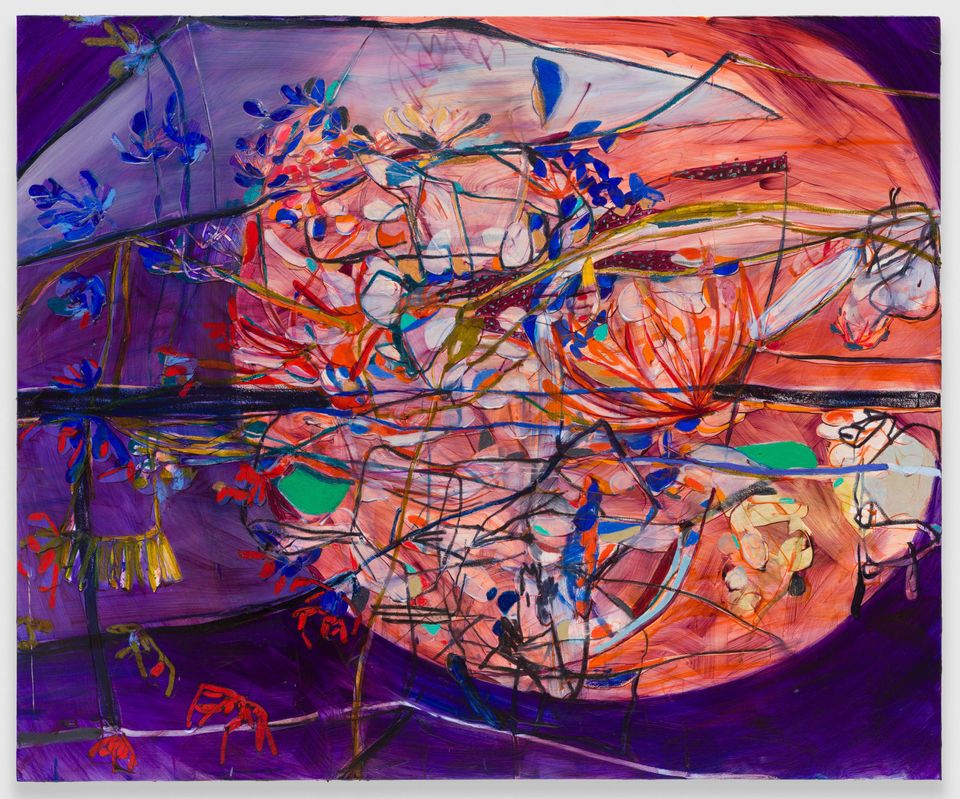 Jadé Fadojutimi's There Exists a Glorious World. It's Name? The Land of Sustainable Burdens (2020) © The artist / Pippy Houldsworth Gallery

Rises to success rarely come more meteoric than Jadé Fadojutimi’s. At just 27 she is the youngest artist to be collected by Tate, the recipient of a solo show at ICA Miami and will feature in the 2021 Liverpool Biennale. Jesture at Pippy Houldsworth Gallery (until 31 October) is the sort of bold, forceful series you might expect from a painter now ready to show themselves unequivocally to the world. Ostensibly brash, the exhibition's 13 oil and oil-stick-on-canvas works are filled with vigorous movement, but also contain a quieter psychological investigation that sits right on their surface. Created during lockdown, these portals into Fadojutimi's subconscious are a depiction of what she terms her "unexplained emotions" during absurd times. Yet despite current tumult, their jumbled, bright, semi-abstract forms seem to swerve away from darker impulses. Instead of anger, there is openness; instead of fear, we find hope. “She is refreshingly uncynical”, said The Art Newspaper’s Review editor Ben Luke after speaking to Jadé on last week's The Week in Art podcast. Moreso than their electric palettes, it is a palpable sense of purpose (and perhaps even positivity) that jolts these works to life. Our present moment might well be a rollercoaster ride of uncertainty, but Fadojutimi is strapping in tight and going full throttle.

Slow Dans (until 25 October) at The Assembly Room—a trio of video installations produced between 2018-19 by Turner Prize-winner Elizabeth Price—is a deep dive into recent histories so hidden they have left scant trace on our earth’s surface. Typewriter-style written dialogue accompanies glowing, shifting images, quickly projecting the narrative across three screens placed up high around the darkened space. Set to pulsating electronic music, the series builds to crescendo at a thriller pace. The stories themselves are a slickly synchronised combination of sociological analysis, historical exposition and ghost story. In Felt Tip, the surprising link between ties, jacquard print, and data chips is investigated. Kohl explores disused mine shafts, which appear inverted on the screen. Underneath, we soon learn, the inky spit of groundwater carries the sounds and spirits of miners through a vast network of tunnels. Like much of Price's previous work, these films require your full attention and partially suspended belief. But it is well worth doing so for the brilliant, if sometimes perplexing, conclusions that are spun like fine silk before our captivated eyes.

“Flowers are the biggest cliches in the universe," says the artist Trevor Paglen, whose new show Bloom (until 10 November) fills Pace with digital renderings of flowers. Paglen, best known for exploring the intersections of AI computing systems and human nature, has contributed to this most long-serving of artistic tropes by creating floral formations via computer vision algorithms built to analyse real-life photographs. Crucially, the colours and shapes in Paglen’s images are conceptualised composites the AI has detected in images of flowers. They are not flowers, but what an AI thinks a flower is—allegories for how these systems interpret the broad complexities of humanity. “There’s now an attempt to make algorithms look less biased or more inclusive,” Paglen says. “Yet these technologies are designed to enhance police power and state power. Can you make a facial recognition system that isn’t racist?”. This exhibition delves into this critical question of our times, exploring how these invisible, omnipresent and increasingly omnipotent apparatus can be liberated from the worst excesses of human divisionism. Visitors can also visit the exhibition through a web portal created by the artist called Octopus (2020) that shows views from cameras installed in the gallery, and even livestream their own images to monitors hanging on the walls. Read our full interview with Trevor Paglen here.