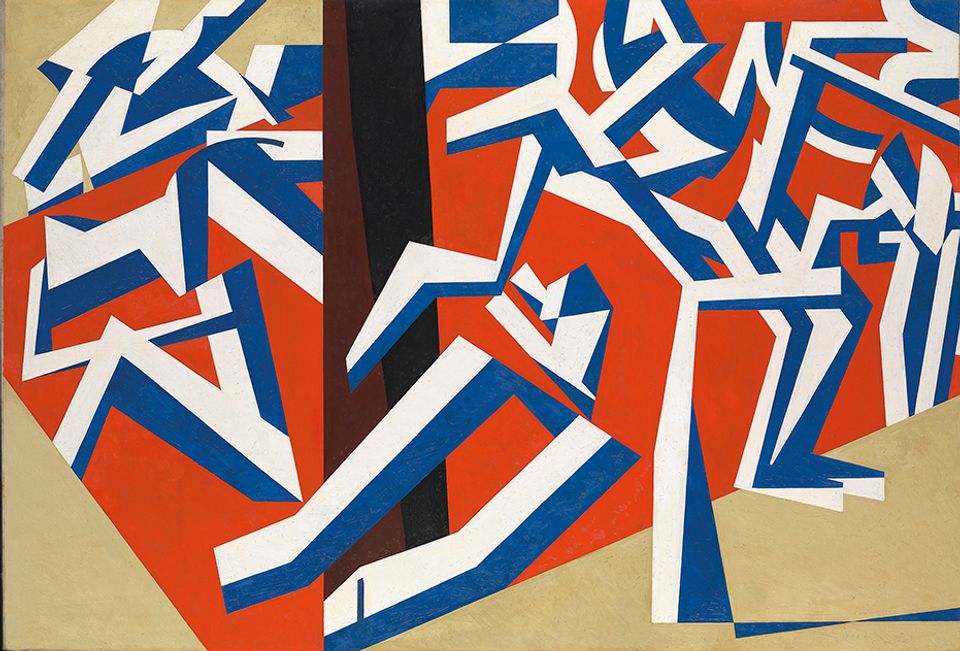 When David Bomberg unveiled a collection of bold geometric works at Chelsea's Chenil Gallery in 1914, he was interpreted by many to be severing ties with traditional art. But, as convincingly argued by Young Bomberg and the Old Masters at the National Gallery (until 1 March 2020; free), his audacious brand of modernism was in fact heavily—and avowedly—indebted to the past. Confined to just one room, the exhibition is rather pressed for space, showing just 8 Bombergs (half of which are preliminary studies) with two Old Masters. In The Mud Bath (1914) (on loan from Tate), quasi-anthropomorphic figures are arranged to loosely resemble bathers at an East End bathhouse. While the show’s catalogue suggests the work's inspirations (namely Rembrandt, Michaelangelo) we are largely left to imagine these links. Far more effective are the direct comparisons—Botticelli’s Portrait of a Young Man (around 1480-5) hangs besides a pencil self-portrait, directly influenced by the quattrocento painting, with both men possessing charismatic, determined stares. Even better is the painted study Sappers at Work (1918-19), a towering portrayal of a mine attack in World War I, which has its striking roses and lilacs tied to the swirling pinks and purples of El Greco. Mercifully, Bomberg is never pitted against these Renaissance heavyweights (there is no doubt who would win). Instead, the show allows for his clear reverence of the Old Masters to remain the focus, serving to both reposition and elevate his work.

“I’m gonna breakaway, breakaway from the everyday,” sings Toni Basil in Bruce Conner’s mesmerising, sexy and infinitely catchy Breakaway (1966). The exhibition Bruce Conner: Breakaway at Thomas Dane Gallery (until 22 February 2020; free) is of a single work that only lasts five minutes. But visitors will find it hard to not watch it more than once or be able to shake off the tune for the rest of the day. On the face of it, especially in a post-MTV world, the experimental US artist’s film is a straightforward music video. But it is in the work’s seeming simplicity where the brilliance lies. Shot on 16mm black-and-white film it shows the US singer and performer Toni Basil dancing in front of a black background, wearing different outfits—quickly losing then gaining them again—as her song plays over the top. The film's fast cut edits and the jitteriness of its frenzied zooms create a strobe-like effect and at times the flickers of Basil’s body make it become almost abstracted; she becomes a trace of herself before boldly coming back. It’s all over too fast before being played back in reverse using a ‘backmasking’ technique popularised by The Beatles that very same year. Basil then makes two fleeting final appearances before the end credit: “fine”.

You would be forgiven for thinking that the Victoria and Albert Museum’s (V&A) exhibition Cars: Accelerating the Modern World (until 19 April; £18) was all about cars. Yes—the vast, underground Sainsbury Gallery does have 15 weird and wonderful automobiles on show, from the Space Age-looking Firebird 1 Concept Car (1953) to a bright yellow, pimped-out lowrider. But there are also 250 objects from the worlds of design, publishing, film and popular culture and plenty of art to enjoy too. The first, and by far the most disturbing, work is Patricia Piccinini’s sculpture Graham (2016), a proposition of what humans might look like if they evolved to withstand car crashes. His flat face, enlarged skull and airbag-like chest are almost enough to prevent you ever getting in a car again. Lying on the other end of the beauty spectrum are the stunning car bonnet ornaments included in the displays, such as Lalique’s Victoire Mascot (around 1925) which essentialises the aesthetic of elegance and speed into tiny, delicate glass sculptures.