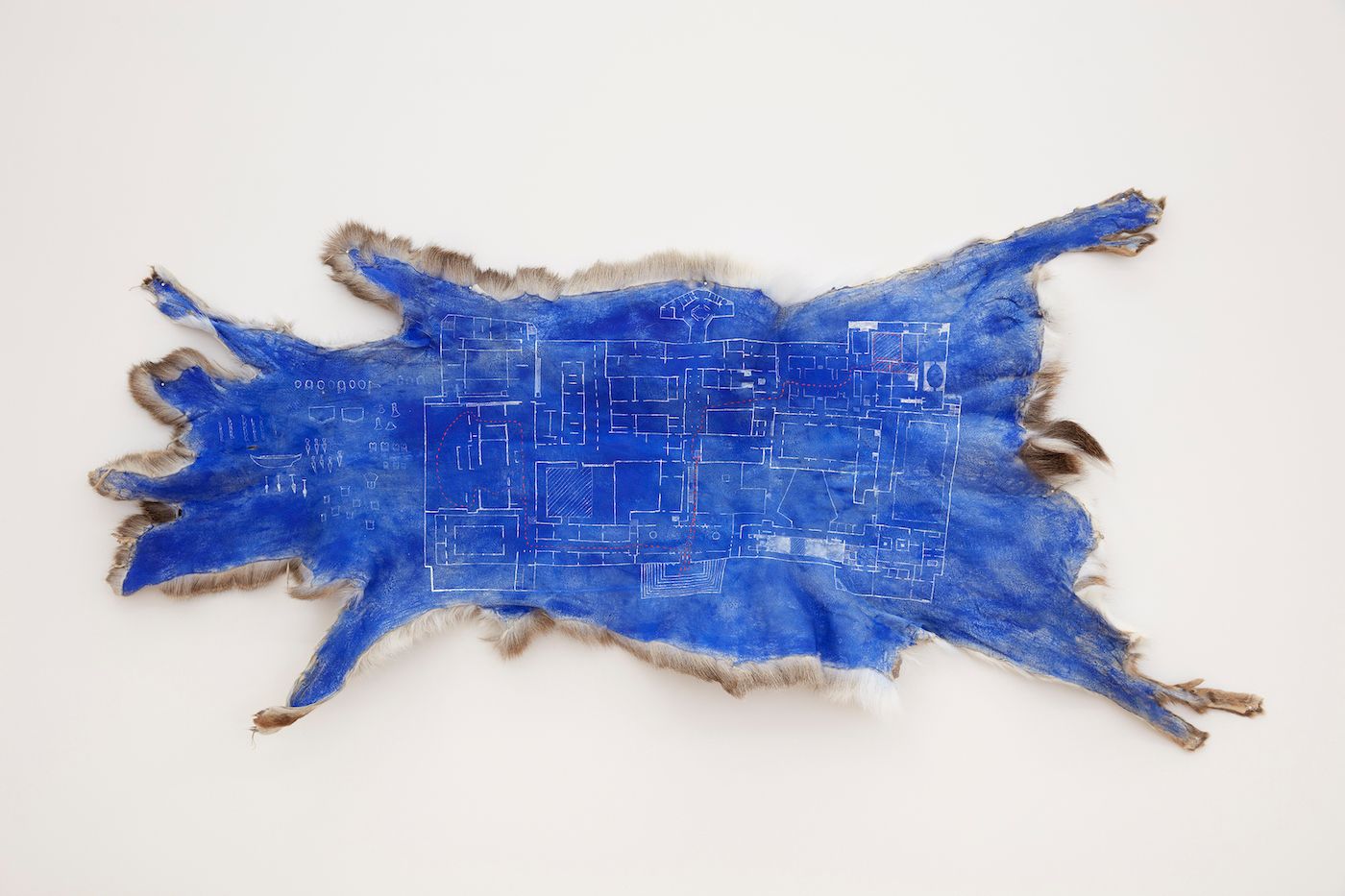 The Tlingit and Unangax̂ artist Nicholas Galanin addresses the pervasive appropriation and institutional display of Indigenous cultural objects in his first solo exhibition in New York, Carry a Song / Disrupt an Anthem at Peter Blum Gallery (until 26 July). The show brings together sculptures, installation, photographs, videos and textile-based works, including the series of drawings Architecture of Return, Escape—a collection of works made on deer hide that map out several “escape plans” for Indigenous objects using the architectural blueprint of the Metropolitan Museum of Art. Institutional critique has been central to Galanin’s practice for some time: in the 2019 Whitney Biennial, he was one the artists who requested to withdraw his work in protest of the museum’s board member Warren Kanders. Galanin opted to remain in the biennial when Kanders resigned, expressing that both decisions were made to “fight the erasure” of Indigenous artists in major American museum collections.

The Dutch photographer Rineke Djikstra fine tunes her modus operandi of tracking people over time in this exhibition at Marian Goodman Gallery in London (until 25 July). On the upper floor, visitors can mull over the transformation of three siblings in Amsterdam in the work Emma, Lucy, Cecile (Three Sisters) (2008–2014)—subjects who were photographed once a year for seven years by Dijkstra. The artist’s portraits of individuals evolving through the ages—such as Chen and Efrat (1999-2005) that captures a pair of Israeli twins captured over six years—are impressive, even unsettling, anthropological studies. Meanwhile, 14 different groups of people ponder on the power of Rembrandt’s epic work The Night Watch (1642) in the three-screen video installation entitled Night Watching (2019); onlookers include a group of Japanese businessmen who say that the 17th-century work, housed at the Rijksmuseum in Amsterdam, should be marketed more effectively as a tourist attraction. Others question the meaning and motivation behind Rembrandt’s masterpiece.

With many degree shows across the world either cancelled or postponed, art schools have had to turn to the digital realm. Some have gone extraterrestrial, while others such as London’s Royal College of Art (RCA) have gone for a “digital discovery platform”—commonly known as a website. This is a vast undertaking, so skip the homepage and head to the Collections section where arts professionals have picked out and curated selections from the 850 graduating students. Among these are selections by the Museum of Modern Art curator Paola Antonelli, who has gone for works themed around the five senses; the editor of British Vogue Edward Enninful who has a chosen a collection of fashion-related pieces; and the photographer Andreas Gursky, who has picked just three photography students. The Collections page also has thematic groupings of works, including sound pieces, works exploring food or surveillance, and even a one simply chosen to “make you smile”.