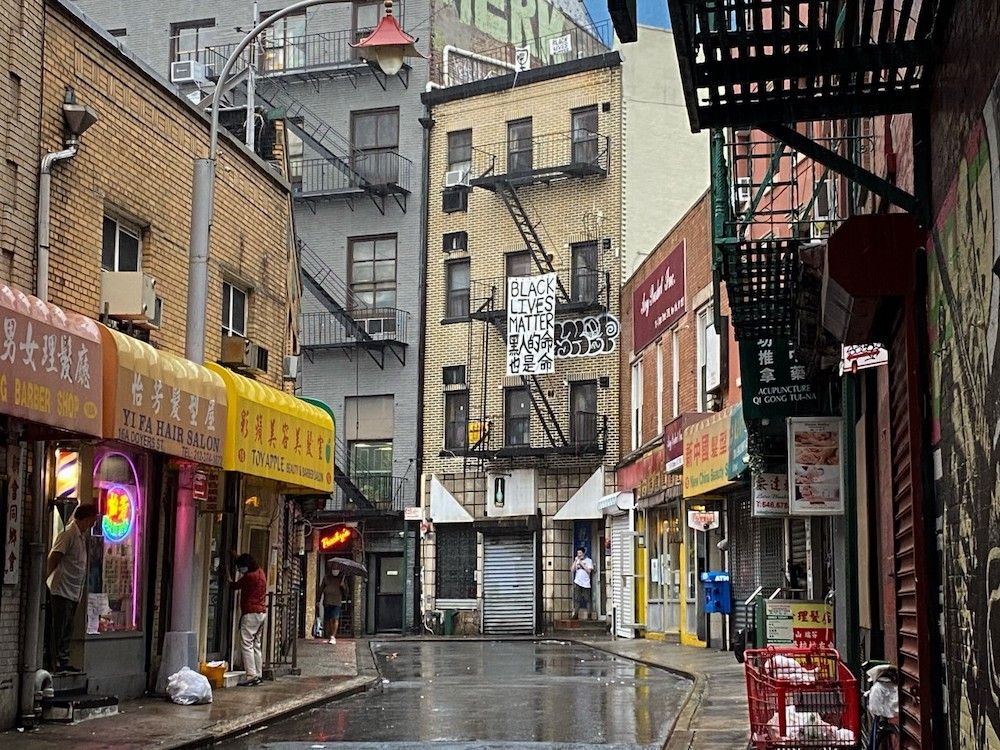 Untitled, July 10, 2020 by Gene Gutenberg The Museum of the City of New York

In April, the Museum of the City of New York issued an open call for New York photographers and the wider public to share images of the Covid-19 pandemic and the Black Lives Matter protests through their lens. Images in the culminating exhibition New York Responds, which has been installed in the museum’s terrace and balustrade per ongoing lockdown restrictions in New York, chronicle the early and bleak days of the pandemic—with photographs like Untitled, July 10, 2020 by Gene Gutenberg showing an ominously empty China Town—and also the fervour that erupted in streets and parks across the city following the police murders of George Floyd, Breonna Taylor and other black Americans. The open-air exhibition will open as larger, in-person show when the museum reopens. In the meantime, submissions are still open, and the museum is also accepting objects and ephemera that will be included in the forthcoming show or could be added to its permanent collection.

The group show Eigenheim (until 13 September) at Soft Opening—the first in the gallery’s new and expanded Bethnal Green space—brings together 12 artists who reflect on the German word for “privately owned home”, a concept whose meaning has undoubtedly shifted for many after four months collectively trapped inside. Carlos Reyes’s take on “eigenheim” sees bright red eggs placed inside two stacks of translucent egg boxes, which form two tiny towers whose inhabitants are simultaneously totally insulated and exposed. The effects of extended isolation on our mental states are also examined in a 2020 series of six eerie egg-on-tempera dreamscapes by Stephen Polatch—in which anthropomorphic bell-chiming birds stroll on beaches in front of swirling starry backdrops. Theodora Allen’s painting Monument, No. 1 (2018) shows psychotropic plants that form an inviting portal to the viewer, promising both hedonistic escape and confrontation with the deepest, darkest recesses of our mind—apt for a world now brought to its knees by unexpected natural forces.

The Whitney Museum of American Art will present its annual Independent Study Program exhibition online. The show, After La Vida Nueva (until 31 August), explores “constructions of self and nation” and draws on “histories of feminist, queer and Third World liberation movements”, according to the museum, taking its title from a work by the Chilean activist artist and poet Raúl Zurita referring to the 1973 US-led military coup against the elected government of Salvador Allende that led to subsequent dictatorship in Chile. Within this thematic framework, the exhibition also addresses activism and community-building amid the global health crisis. The Whitney’s one-year study programme, which was founded in the late 1960s, has helped propel the careers of curators, critics and artists like Félix González-Torres and Jenny Holzer. This year’s virtual event kicks off on 7 August with a walk-through introduced by Sadia Shirazi, the museum’s instructor for curatorial studies, followed by an opening reception and Q&A with participating artists.