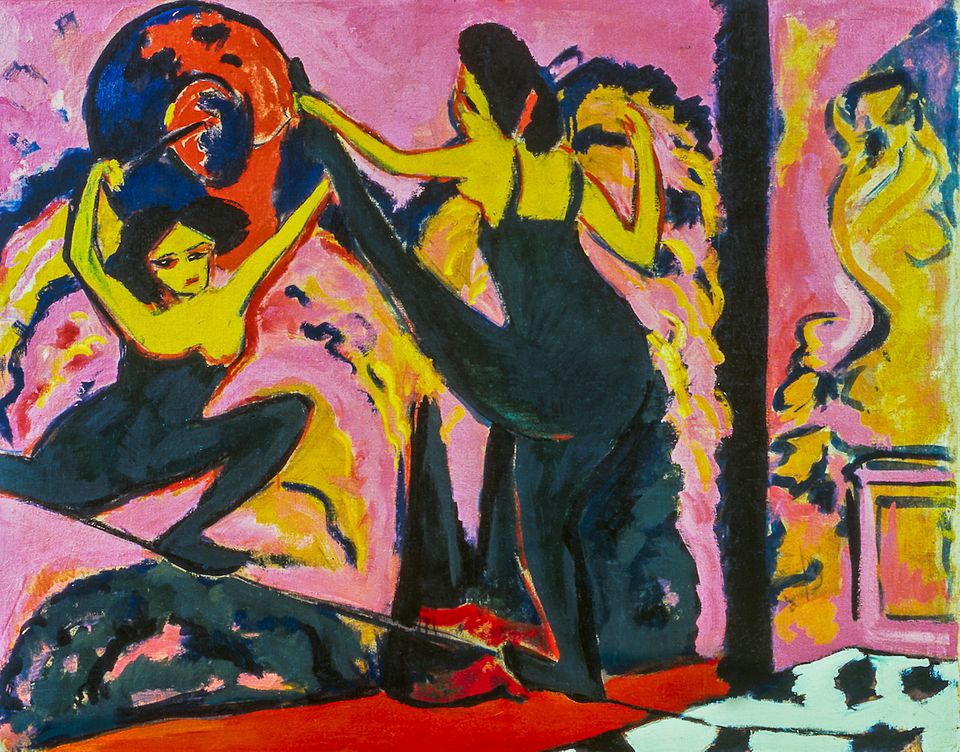 The retrospective devoted to Ernst Ludwig Kirchner (until 13 January 2020) at the Neue Galerie presents a sweeping overview of the German Expressionist’s oeuvre, comprising more than 90 paintings, drawings, prints, photographs and decorative pieces that celebrate the artist’s eye, influence on art history and masterful understanding and command of colour. Paintings such as Tightrope Walk (1908-10) “boldly conveys the radical movement of Expressionist performers through his deliberate use of colour and through his own experimental approach to painting— the work epitomises his aspirations during his optimistic years in Dresden”, the curators Janis Staggs and Jill Lloyd say in a statement. The exhibition traces the evolution of Kirchner’s style and is split to focus on the three main phases of his career, from the Dresden years—when the artist co-founded the Expressionist group Die Brücke with Karl Schmidt-Rottluff, Fritz Bleyl and Erich Heckel—to his Berlin period and his time in the Swiss Alps, where he committed suicide in 1938 . His death followed a personal crisis coinciding with the 1937 Degenerate Art exhibition, which featured more than 30 of his works. Among other highlights at the Neue Galerie, the painting Self-Portrait as a Soldier (1915) “is a depiction of his existential fear of losing his artistic ability and his personal identity—though ironically he was at the height of his artistic powers—and is emblematic of his own predicament, while also capturing the threat that hung over an entire generation of young men who were called to serve during the First World War”, the curators add.

John Singer Sargent: Portraits in Charcoal at the Morgan Library and Museum (until 12 January 2020) is the first exhibition dedicated to this overlooked part of the artist’s practice. The show brings together around 50 of the more than 750 charcoal drawings the Anglo-American portraitist made in the last 18 years of his life, when he shifted from oil to charcoal in order to fulfill commissions. “While Sargent’s oil portraits hang on the walls of major art museums on both sides of the Atlantic, many of the charcoal portraits remain in private collections, belonging to the descendants of the people portrayed,” the museum’s exhibitions curator Laurel Peterson tells The Art Newspaper. “Moreover, charcoal drawings are light-sensitive and more fragile than oil paintings, which means that museums cannot have them regularly on display.” Among the most evocative works is Sargent’s portrait of the actress and suffragette Gertrude Kingston. Set in profile against a dark background, it “carefully renders her distinctive features [with] thick, quick strokes of charcoal that suggest the textures of her sumptuous triple-decker hat”, Peterson says.

It’s the last week to see Lubaina Himid: Work from Underneath at the New Museum (until 6 October). In her first solo exhibition in the US, the Zanzibar-born artist, a pioneer of the British Black Arts movement of the 1980s, presents a series of new paintings (rendered on fabric, metal and wood) and sculptures that address the reverberations of colonialism. Among the most striking pieces is the painting Old Boat/New Money (2019): it comprises 32 wooden planks painted in several shades of grey and adorned with cowry shells, which were used as currency in the trans-Atlantic slave trade and convey a sacred symbolism rooted in African spirituality. The work “evokes an abandoned boat on the open sea, not knowing where you are and not knowing what’s coming next”, the artist says of the work. Himid, who is the first black woman to have been awarded the Turner Prize, says the exhibition aims to “create an environment in which you can experience uncanny and familiar feelings, […] where you can experience some solutions for surviving trauma”.