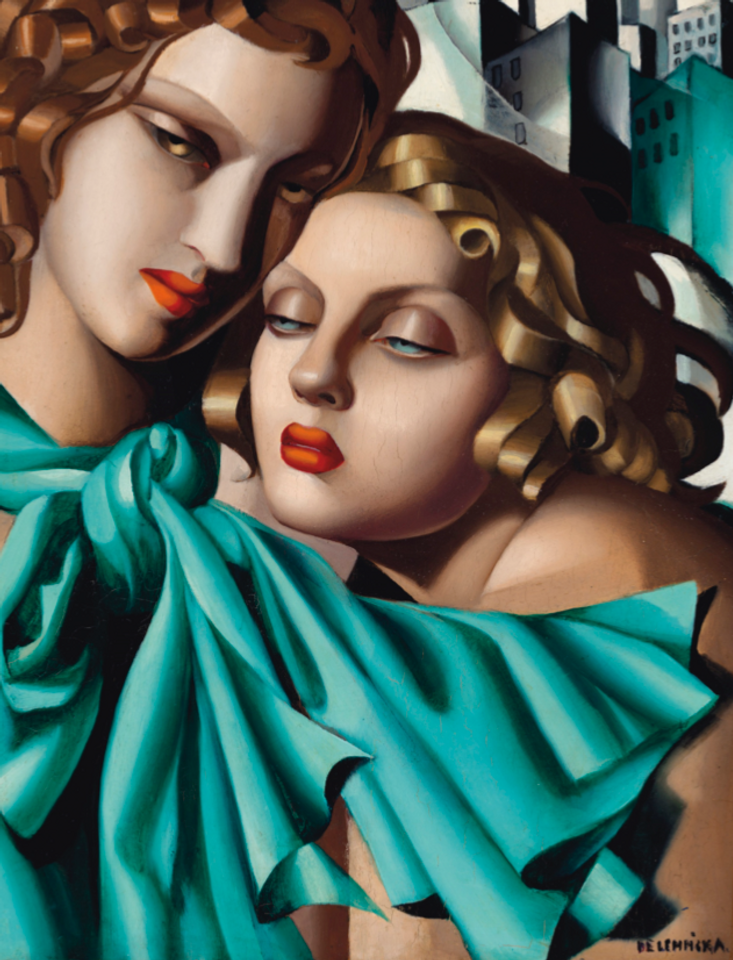 Tamara de Lempicka's Les Jeunes Filles (circa 1930) is on view at Kosciuszko Projects. The work will be offered by Christie's on 11 November in its Impressionist and Modern art evening sale. Christie's Images Ltd.

The Many Faces of Tamara de Lempicka at Kosciuszko Projects (until 1 November) is the first US exhibition devoted to the Polish artist since 1961, and the debut exhibition of the Kosciuszko Foundation’s new project space dedicated to Polish art. The show features paintings and drawings by de Lempicka, a pioneer of the Art Deco style, as well as photographs, archival materials and personal objects. According to the curator, Bartek Remisko, the exhibition aims to “present a glimpse into the de Lempicka phenomenon as it has come to be known since her critical re-evaluation began in 1972”, when the artist had a major solo exhibition at the Galerie du Luxembourg in Paris. “Only now, nearly one hundred years after the artist’s debut, are we able to evaluate the work and artistic stature of Tamara de Lempicka in 20th-century art, and not only her but also the wave of women who overcame barriers in access to artistic education and to independent careers,” Agnieszka Morawinska, the former director of the National Museum in Warsaw, writes in the text accompanying the exhibition.

What does radiation look like? The exhibition Alice Miceli: Projeto Chernobyl at the Americas Society (until 25 January 2020) presents 30 images that the Brazilian artist captured of the material using a method she invented involving autoradiographic techniques and pinhole cameras. Miceli captured the images from 2006 to 2010 in some of the most contaminated areas of the Chernobyl exclusion zone in Belarus and developed them through a months-long process in an abandoned hospital in the area. The haunting black-and-white images, which are mounted in a light box and viewed in a pitch-black gallery, suggest sinuous trails of smoke within misty backdrops. The project captures what is normally invisible to the naked eye and conventional photography to document the enduring environmental contamination of the 1986 disaster at the Chernobul nuclear plant. In an introductory video, the artist says she began the project out of an interest in recording places that news coverage has forgotten about, or places that are no longer “en vogue”.

In Jacolby Satterwhite’s exhibition You’re at Home at Pioneer Works (until 24 November) in Brooklyn, the artist has made a sprawling industrial space unexpectedly intimate. Floor-to-ceiling wallpaper and futuristic cabinetry greet the viewer, with small monitors and colourfully gridded 3D-printed sculptures tucked onto sleek shelves. Couches and plants evoke a stylish living room, and a carpeted area displays a new double-LP vinyl featuring the vocals of his late mother, Patricia. Dance beats add a throbbing texture to her lilting home-recorded lullabies, which also make up the soundtracks for Satterwhite’s VR animations, viewable on headsets. A lush world of dancers and twisting wires is equal parts hazy club memory and cyberpunk fantasy. But the highlight of the show is a modest room adjoining a disco-ball-bedecked dance floor. Framed drawings by Patricia Satterwhite depict unrealised designs for futuristic garments and household objects, all bearing lattice patterns that look like proto-digital structures. This heartwarming tribute provides new insight into her son’s visionary worldview.